WE HAD US A BIT OF A PHEEBE EMERGENCY THIS MORNING 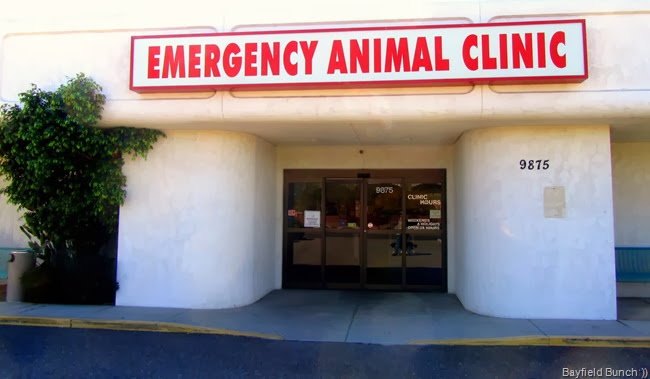 Late Saturday afternoon we noticed what looked like a swelling on the top of Pheebs snout.  By Saturday night she definitely had a sizeable lump on her nose.  Her behavior was normal & she did not appear to be in any kind of stress.  Thought maybe she might have bumped her nose on something while racing around but when I turned on my light Sunday morning I immediately knew it was more than just a nose bump. 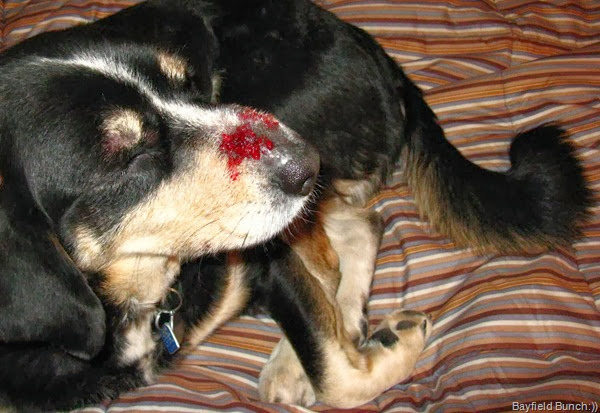 The top of her snout was all bloody.  Her behavior was still normal but when I took her out she sat down & held her paw up.  Thought she had a sticker so checked.  No sticker.  Heard her whimper once.  When she came in she started licking her paws.  That is often a sign of pain in a dog.  Other than that she seemed her usual happy little self.  Being it was Sunday our Wickenburg Vet office was closed.  Kelly called the number anyway & wrote down the address & number of an emergency Vet Clinic in Peoria, a part of northern Phoenix.  My biggest worry was some kind of snake bite but Pheebs symptoms did not match up with that but we couldn’t take any chances.  Decision was made to take her to the Clinic in Peoria (Sun City) 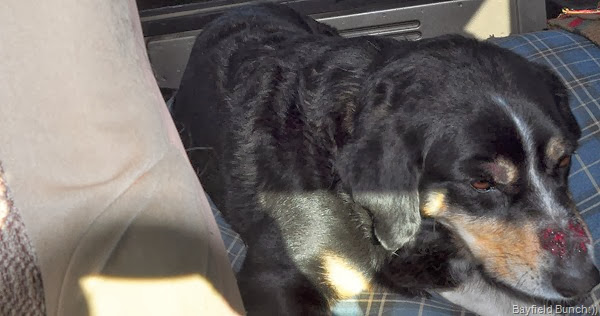 It was 8:05 when we rolled out our gate & with the ‘hammer down’ we were in Peoria’s Emergency Clinic lobby by 9:20.  On the way there Kelly had also noticed some reddening on Pheebs upper lip.  Vet came right out to look at her & also noticed some swelling & redness around her right eye.  He did not feel it was a Rattlesnake bite.  He said for us to just have a seat & wait.  And wait we did:((  It was exactly 2 hours before we saw the Vet again.  In the meantime Pheebs did not exhibit any signs of stress, restlessness, or pain. 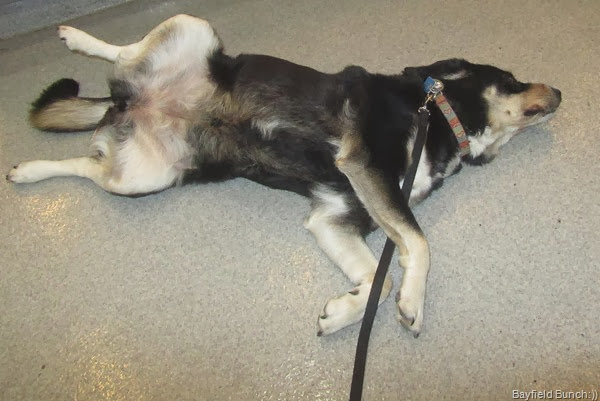 PHEEBS WAS MORE RELAXED IN THE WAITING ROOM THAN WE WERE 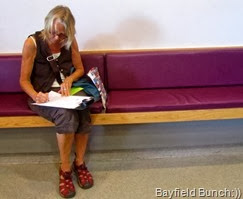 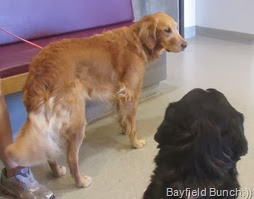 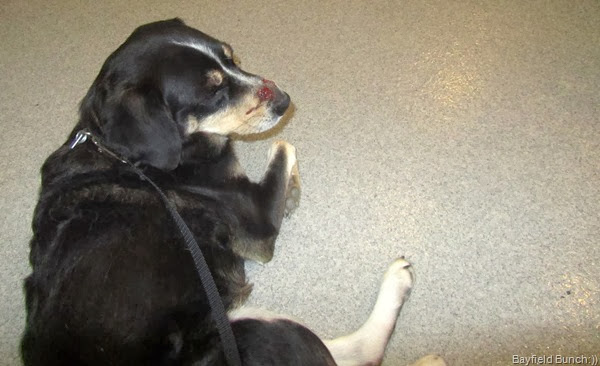 We were finally called & taken into a back room where an intern weighed Pheebs (45pds) & took her temperature.  Temperature was up slightly.  A lady Vet came in & gave Pheebs a thorough examination.  She noted the insides of Pheebs ears were slightly red.  Her diagnosis was, ‘an unusual allergic reaction’.  Meds were prescribed & Pheebs received 1 cortisone shot & 1 antihistamine shot.  Also a plastic head cone to stop her from itching her nose if we needed it.  She did really well with all the poking & prodding & the Vet said she wished all her patients were as good as Pheebs.  It was after 12 by the time we left the Emergency Clinic.  If it was an allergic reaction to something we still do not know what that something was. 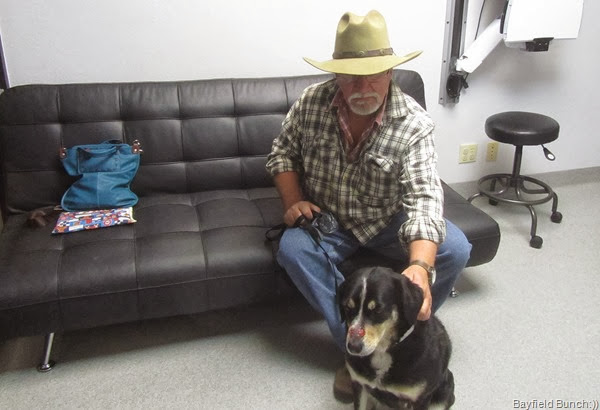 WAITING FOR THE VET IN AN INNER EXAMINING ROOM 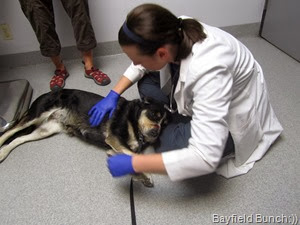 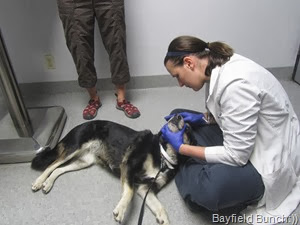 First stop on the way home was Trader Joes where Kelly zipped in & picked up 4 bags of stuff.  (I later discovered some Ginger Snaps & Lemon Crisp cookies) I stayed with Pheebs in the Jeep just in case there was any reaction to her shots.  Neither one of us had eaten any breakfast & I only had a bowl of cereal for supper Saturday night so we were hungry.  Didn’t want to go into a restaurant & leave Pheebs in the Jeep so we popped into a Burger King & Whoppered ourselves with burgs & fries to go.  Had maybe been 25 or 30 years since I had last been in a Burger King & must say I really enjoyed my Whopper, small fries, & Root Beer. 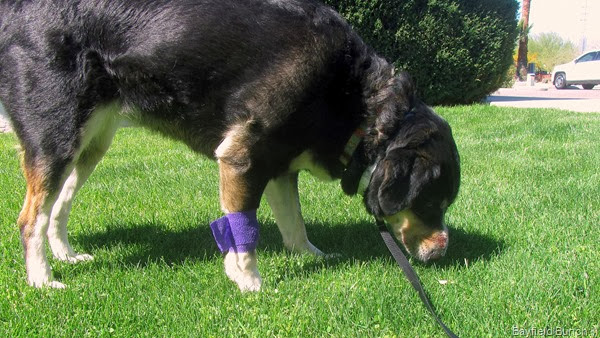 A PURPLE BANDAGE WHERE SHE GOT HER SHOTS THIS MORNING

The day was heating up & with no A/C in the Jeep we made fast tracks for home.  We were slowed down a bit by two accidents close together.  One in front of Wickenburg’s McDonalds & the second one a few hundred yards up the road at a Round-a-Bout.  We were soon past the slow downs & home shortly after 2 p.m.  Pheebs made the trip just fine despite the Vet saying she might be on the drowsy side.  Pheebs is such a non stop happy energetic dog the word drowsy means nothing to her. 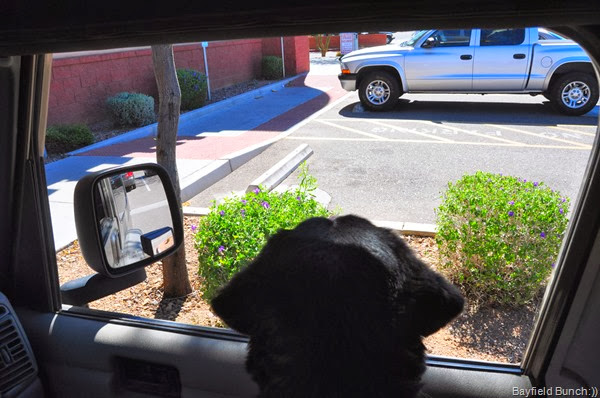 WAITING FOR MOM TO PICK UP THE MEDS AT CVS PHARMACY

Hadn’t even been 2 hours since her shots at the Clinic & already we noticed a big change in her nose.  The raw blooded look had toned right down to a darker healing color.  She might have shown a few sleepy signs but her tail was just a going & she had her usual big smile on her face that would make a Cheshire Cat look like a grumpy Perkins.

FROM OUR FRIDAY JEEP TOUR

Bev (from our Friday Jeep trip) popped over for a few minutes & we may very well be off on one more Jeep trip later this week or the week after.  Not a big long one though.  Snow Birds will soon be scattering north to different parts of the country so Bev thought it would be nice to have one more dusty desert rumble.  Nan & John from TRIPPIN WITH THE TALLEYS had figured on stopping by today but plans changed & they have gone on to Quartzsite.

Aside from night winds messing up our mats & dumping over our lawn chairs again our mornings just keep getting nicer with temperatures rising a bit each day.  Desert plants are greening up & early flowers are blooming.  Any day now the Mesquite trees will begin to leaf out & hopefully some of our Cactus plants will sprout some buds shortly.  Our Palo Verde trees seem to be late leafers so we  have never seen leaves on them.

For any of you vintage Ford lovers TOM has a bunch of photos from Bisbee Az where he came across a vintage car gathering.  Bisbee is always a great place to visit at anytime but roll some old Fords into town & car buffs can have themselves a great day. 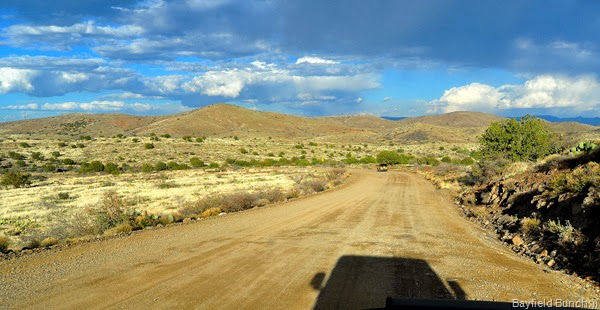 SHADOWS WERE LENGTHENING AS WE REACHED THE VALLEY FLOOR

In a comment question on Thursday’s post Cindie asks, ‘have you ever come across any kind of trouble where you felt having a gun around might be a nice addition? Or have you heard any stories from other RV'rs who have’?  Well I can’t speak for other RV’ers but my answer to that question is ‘no we have never felt that’.  But I will quickly add that we have thought about it & do understand the logic of carrying some kind of protection whether it be from 4 footed animals or 2 footed ones.  Being Canadian & not being of the hunting side of life guns are foreign to us.  Never brought up with them & know very few fellow Canadians who carry them.  Totally different story here in the South-West where guns are a way of life & as common as carrying a wallet in one’s back pocket.  Arizona especially.  In our first 4 years or so of Snow Birding we spent a fair bit of time only a few miles from the Mexican border in an area known for drugs, illegals, & violence at times.  At no time did we ever feel threatened or in a dicey situation.  Of course we were always generally mobile & if threatened by anything always had the option of flight.  Not saying bad things can’t happen but we were always vigilante & did not venture into known risky areas.  We never felt the need to carry a gun & yet we do understand the logic in doing so.  Our main threat as we see it is Rattlesnakes, Javelina’s, Coyotes, Mountain Lions, & maybe Bobcats.  All very real threats.  Maybe not attacking us directly but attacking Pheebe.  We have looked into & talked about a small gun while hiking & Jeeping out in the desert but we have not made any decisions.  I suppose if we came across something for sale at a reasonable price we might seriously consider it……..

Just finished watching the first installment of the new series COSMOS which will continue on Sunday nights.  What a welcome breath of fresh air this show is.  It is a continuation of the original series by Carl Sagan years ago before his death.   And in my opinion after seeing tonight’s first episode, very well & very professionally done.  I especially liked this show because it follows a scientifically realistic approach to who & what we are & how we got here.  For me this is television at it’s best.  Yes, a breath of fresh air indeed.  Bravo Cosmos….’Bravo’. 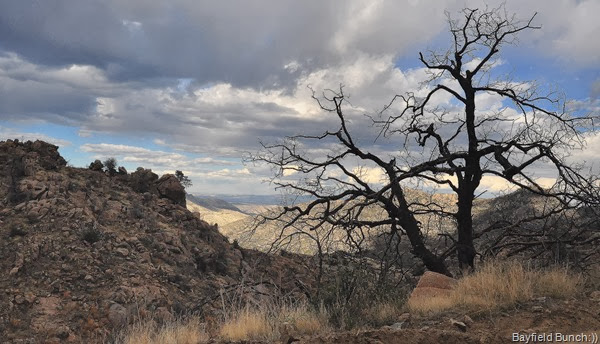 At time of posting tonight Pheebs still seems fine & is right now sound asleep on my bed.   We’ll see how she’s doing in the morning………… 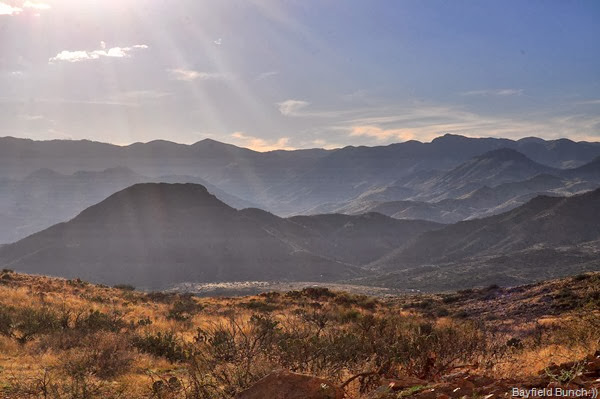 WE HAD JUST COME DOWN OUT OF THOSE DISTANT BRADSHAW MOUNTAINS

GROANER’S CORNER:((  There's no such thing as a stupid question. Right? Not if you ask the National Park rangers who compiled this list of actual questions asked by park visitors.

At Grand Canyon National Park:
"Was this man-made?"
"Is there an elevator to the bottom?"
"Do you light it up at night?"
"Is the mule train air-conditioned?"
"Where are the faces of the presidents?"

At Carlsbad Caverns National Park:
"How much of the caves is underground?"
"So whats in the unexplored part of the cave?"
"Does it ever rain in here?"
"So what is this, just a hole in the ground?"
"How many ping pong balls would it take to fill it up?"


At Everglades National Park:
"Are the alligators real?"
"Are the baby alligators for sale?"
"When does the two o'clock bus leave?"

At Yosemite National Park:
"What time of year do you turn on Yosemite Falls?"
"What happened to the other half of Half Dome?"


At Alaska's Denali National Park:
"What time do you feed the bears?"
"How often do you mow the tundra?"
"How much does Mount McKinley weigh?"


At Mesa Verde National Park:
"Did people build this, or did Indians?"
"Do you know of any undiscovered ruins?"
"Why did they build the ruins so close to the road?"