THE NORTH RANCH GARAGE SALE THIS MORNING WAS OUR ONLY EXCITEMENT FOR THE DAY……….. 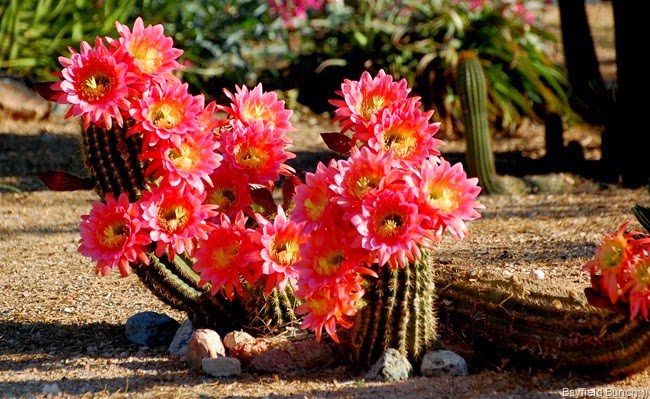 With only about 3 weeks before we arrive home & the amount of snow on the ground & cold temperatures around the Great Lakes area in Canada it is not likely we will get home to a snow free house & property.   Every time temps come up bit snow slides off our roof on the north side & creates a large snow bank along the entire length of our house.  Freezing & thawing turns much of that snow to ice.  Due to that heavy snow load being on the north side plus the fact our Bayfield house is surrounded by tall Pine trees it means that big block of snow & ice will not be totally gone until around the end of April…..maybe even early May sometime this year.  The Sun just cannot get into that area of our yard to melt that hardened snow pack.  We are definitely not looking forward to arriving back to all that cold frozen mess.  Happened to us 3 years ago & I had to use a pick-axe & shovel to break up the frozen snow & ice to clear a safe path to our front door.  Not nice!!  ‘Snow, snow, go away & come back another day when we are once again so very, very, far away’.

Had to roust ourselves out a bit on the earlier side this morning.  No way was Kelly going to miss out on being on the front lines at North Ranch’s semi-annual big garage sale.  And no way was I going to get out of driving the Jeep around making about forty three hundred stops at every little table full of goodies.  Had thought about hooking the utility trailer on just in case the Boss came across some stuff we just could not absolutely live without but decided not to.  Would have, could have, & should have……hooked up that trailer!!

THIS IS KIND OF HOW WE DO OUR GARAGE SAILING, KELLY WALKS THE STREET WHILE PHEEBS & I OBEDIENTLY FOLLOW SLOWLY IN THE JEEP 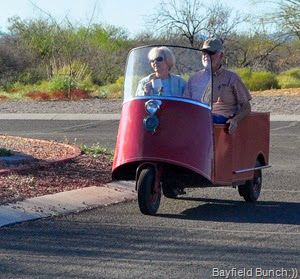 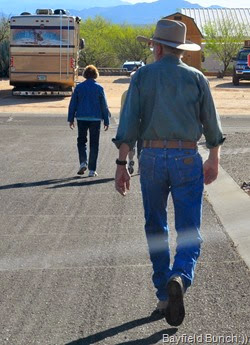 Made a lot of stops, waved at people we knew, hollered a few Hello’s while we past by other familiar faces, dodged half a dozen golf carts & twice as many ATV’s.  And we never even spent a penny despite having to return home for the utility trailer to go back & load up a couple free glider chairs.  Only time I got out of the Jeep all morning was to look at those free chairs.  Figured they would be good on our front porch.  And that’s where they are.  By 10 a.m. our excitement for the day was pretty much over so we headed home & just kind of slipped into a dormant state for the rest of the day & that was it. 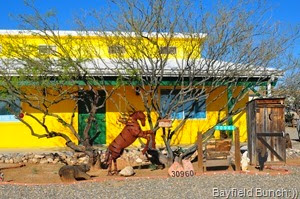 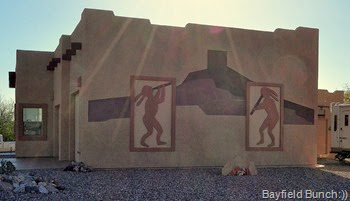 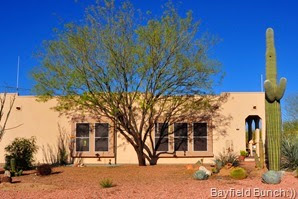 Looks like we have us another desert Jeep trip coming up this Tuesday with the same cast of characters we were out with to Crown King recently.  And that includes Emmi & Pheebs.  This trip will take us to Alamo Lake west of Congress where we will be in search of a certain Slot Canyon out there somewhere.  We will all rumble out of Congress around 8:30 Tuesday morning.  Arizona time that is:)) 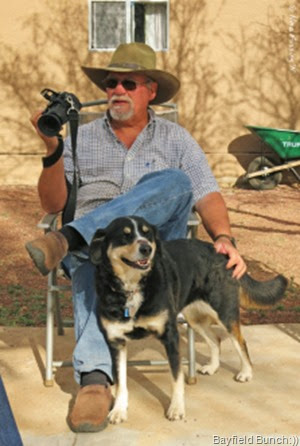 REALLY LIKED THIS PHOTO TAKEN BY FELLOW RV BLOGGER & FRIEND NINA OF ‘WHEELING IT’ FAME…...SHE ENTITLED IT, ‘A MAN, A CAMERA AND HIS DOG’…THANK YOU NINA:))

We’re cautiously optimistic Pheebs nose this time may be finally healing.  Of course I’ve said this a couple times before this week only to have her scratch it open again half a dozen times.  By my publishing deadline tonight she has not scratched her nose for well over 24 hours.  Our fingers & paws are crossed…………… 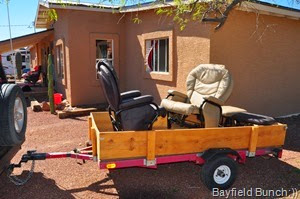 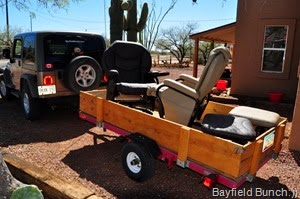 GROANER’S CORNER:(( A mom was concerned about her kindergarten son walking to school. He didn't want his mother to walk with him.
She wanted to give him the feeling that he had some independence but yet know that he was safe. So, she had an idea of how to handle it.
She asked a neighbor if she would please follow him to school in the mornings, staying at a distance, so he probably wouldn't notice her. She said that since she was up early with her own two kids anyway, it would be a good way for them to get some exercise as well, so she agreed.
The next school day, the neighbor and her little girl set out following behind Timmy as he walked to school with another neighbor girl he knew. She did this for the whole week. As the two walked and chatted, kicking stones and twigs, Timmy's little friend noticed the same lady was following them as she seemed to do every day all week.
Finally she said to Timmy, "Have you noticed that lady following us to school all week? Do you know her?"
Timmy nonchalantly replied, "Yeah, I know who she is."
The little girl said, "Well, who is she?"
"That's just Shirley Goodnest," Timmy replied, "and her daughter Marcy."
"Shirley Goodnest? Who is she and why is she following us?"
"Well," Timmy explained, "every night my Mom makes me say the 23rd Psalm with my prayers, 'cuz she worries about me so much. And in the Psalm, it says, 'Shirley Goodnest and Marcy shall follow me all the days of my life', so I guess I'll just have to get used to it!"