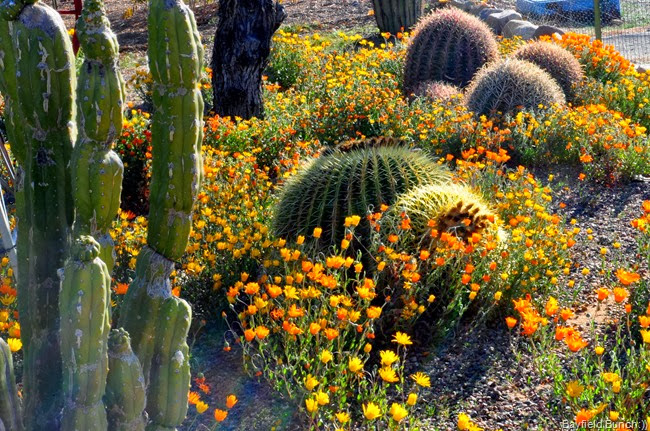 Just as some days I have no idea why my energy levels drop I also do not understand other days when those same energy levels spike.  How come we can’t have ‘spiky’ days every day.  Only thing to do on low energy days is to ride it out & the only thing to do on the spike days is just go with it & get as much accomplished as possible without ask any questions.  My ‘spike’ level washed the whole darn Winnie Wagon this morning.  Sure had a lot of powdery Arizona desert dust to get off & out of it.  Warming temperatures are upon us & with today’s sunshine I think they both came together to give me the ‘spike factor’. 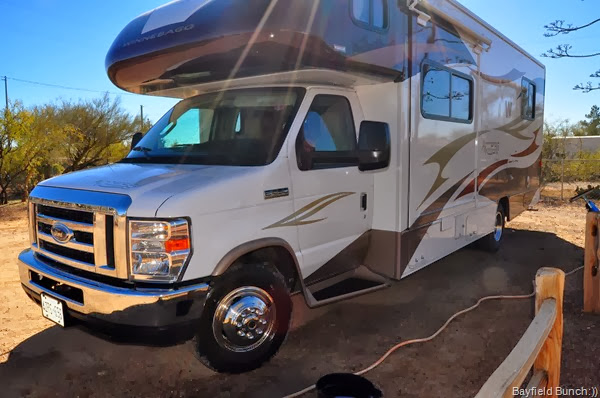 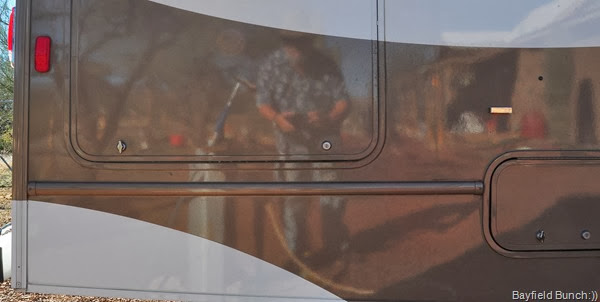 AND BY GOLLY IT’S EVEN SO DARN SHINY I CAN SEE REFLECTIONS:))

Tracking data showed our new Millenicom Jet-Pack was in & sitting at the Congress Post Office.  Kelly & Pheebs jeeped on over there & picked it up this morning.  Within half an hour Kelly had us switched over from Verizon to Millenicom.  And none to soon because we were once again over our 10 Gig Verizon limit with another 8 days to go.  We have put Verizon on a 90 day hold just in case we are not satisfied with Millenicom.  We now have a Millenicom 4G Jetpack which should speed our internet up for us when traveling but being in a 3G zone here in Congress we probably will not see much if any jump in speed.  But we have 20 Gigs now for less money a month than Verizon.  Why we dragged our feet on this decision for so long I have no idea. 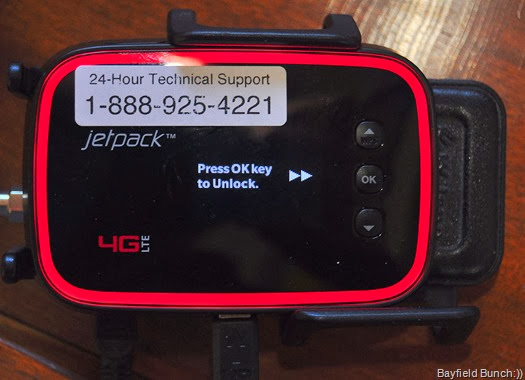 OUR 4G MILLENICOM JETPACK SITTING IN OUR WILSON SLEEK

Having never even graduated from High School I probably do not have any room to criticize or question why highly paid & well educated engineers would ever design toasters with power cords at the front end of them when the electrical wall plug is behind the toaster.  In my little world it just seems to make more simple sense to put that cord at the back of the toaster….& maybe add an extra foot of length to that short cord while they’re at it. 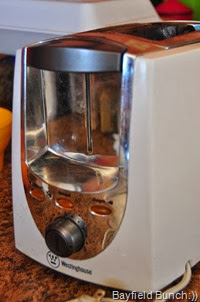 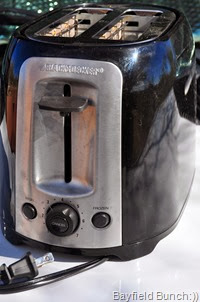 BOTH OUR TOASTERS HAVE CORDS INCONVENIENTLY LOCATED AT THE FRONT

Compared to a week ago at this time there isn’t a lot for me to write about.  Or maybe it is just that I am not always able to motivate myself into writing mode.  Either way or for whatever reason, it is just the way it is sometimes.  Like I have often said, there is always something to do or write about if one can just inspire one’s self to simply get at it & do it. 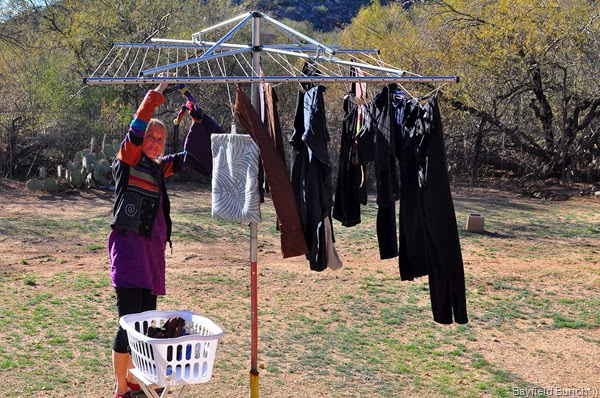 Well wouldn’t ya know it………I had just finished my above paragraph when the CBS 50th Anniversary Beatle special came on.  Well, that sure gave something to write about right quick.  Oh how I soooooo much enjoyed this show.  All the performances were just great & I heard some new artists I had never heard before.  The fellow who sang ‘Let It Be’ just did a fabulous job on that song.  Oh how nice to finally see true & raw talent again in these performers.  Not only the singers but the all the instrumentalists as well.  And all the people behind the scenes who put this Tribute together.  Loved the guitar work between Keith Urban & the other fellow.  And again the voices & the harmonies.  Great to see Joe Walsh from ‘The James Gang’ & the ‘Eagles’ still going strong & able to once again bring a crowd to it’s feet.  Loved that ‘Magic Dragon’ group.  And of course Paul & Ringo.  What a great job the two of them did on their individual songs & how wonderful it was to see them again on stage together.  They brought the house down & finished the show so memorably with Paul McCartney’s, ‘Hey Jude.’  How refreshing, how encouraging, & just how swell it was to see this great well done Beatle Tribute. Music performed by old & new folks the way it was always meant to be heard & the way I remember it best.  Ahhhhhh, the magic of it all:)))))))))))))))))))))))))) 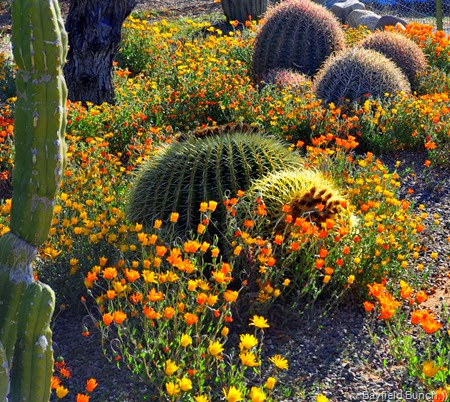 And do I remember where I was 50 years ago Sunday night?  Sure do.  It was a cold winters night in February & I was with friends at a cottage in Port Frank’s Ontario.  Myself, Jim & John Eifert, Craig Wilker, & Gary Burton, who’s parents owned the cottage, had just spent a few days at the lake.  We were all in front of the black & white television watching Ed Sullivan & waiting for the Beatles to come on.  We had packed Gary’s Dad’s car for our hour drive back to Tavistock Ontario but delayed our usual early departure to wait & see what all this Beatles fuss was about.  I can still remember the excited feeling that came over me watching John, Paul, George, & Ringo.  We were all music loving guys but we had never seen or heard anything like what we saw & heard that night.  It is a memory & a feeling that will stay with me forever…….. 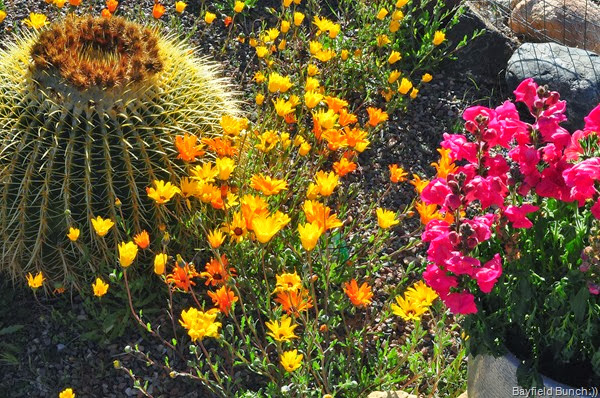 - Those who are too smart to engage in politics are punished by being governed by those who are not smart enough.

- Instead of giving a politician the keys to the city, it might be better to change the locks.

- A politician is a fellow who will lay down your life for his country.

- One politician offered his opponent a deal: "if you stop telling lies about me, I will stop telling the truth about you".

- Politics is the gentle art of getting votes from the poor and campaign funds from the rich, by promising to protect each from the other.

- We hang petty thieves and appoint the great thieves to public office.

- Now and then an innocent man is sent to the legislature.

- Although he is regularly asked to do so, God does not take sides in American politics.

- In politics, absurdity is not a handicap.

- In democracy it's your vote that counts;
In feudalism it's your count that votes.