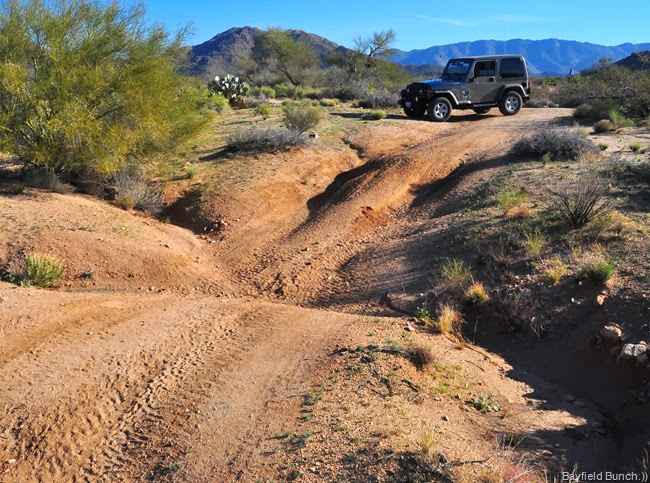 HAD US A NICE RELAXING DRIVE THIS MORNING
Nice to see & feel the warmth of that big Arizona sun this morning.  We piled into the Jeep & with miles of open desert just a block away we headed off on some rough & tumble roads with no particular destination in mind. 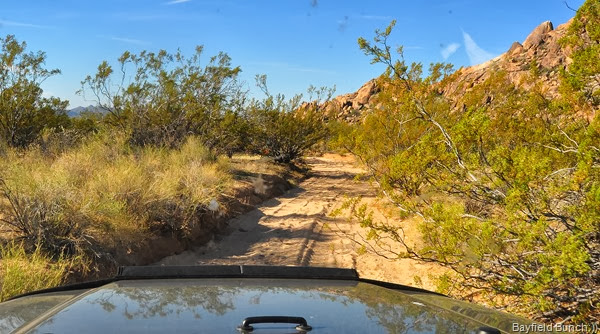 THIS ATV TRAIL GOT A LITTLE NARROW IN SPOTS

We picked ourselves up a narrow ATV trail & that of course resulted in some new & rather dazzling desert pin striping for little Jeepers.  Sure glad we do not have a sparkly new Jeep because if we did I would be afraid to take it out & get it all scratched up.  Stopped a few places for a couple short walks & one small rock scramble.  Managed to see some new scenery & of course marveled at the green Sonoran desert surrounding us at all times.  How great it is to have all this beauty right at our door step. 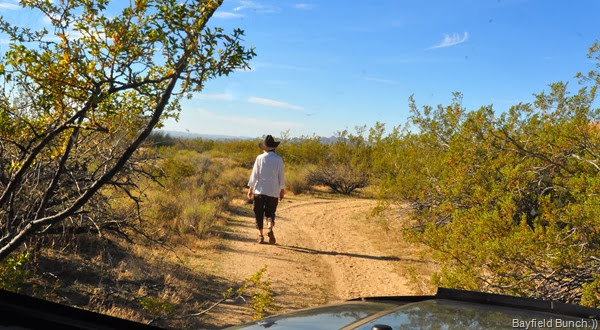 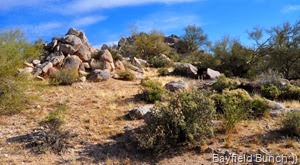 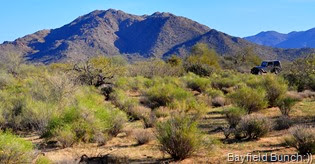 THIS WHOLE DESERT AREA IS GREAT HORSE RIDING COUNTRY
It was still early enough & the rocks cool enough that I was not too concerned about Rattlesnakes.  Later in the hot day, yes.  We had a Gopher (Bull) snake in our yard a couple weeks ago so we know the Rattlers can be out as well during the hotter part of the day.  Sandy & Simon saw a Scorpion a couple days ago while trying their hand at a little Gold prospecting out near Stanton. CHINLE wondered if we have seen any Tarantula spiders & the answer is yes, but not here.  One time at the Clark Dry Lake Bed just outside of Borrego Springs California & the other time while Ranch sitting near McNeal Arizona.  Both times I was able to get some close-up photos as I sat on the ground beside the big Tarantula’s as they passed harmlessly by our lawn chairs.  Tarantulas have an undeserved bad name & are not to be feared or mishandled.  Snakes I’m a bit sqeezy about but spiders don’t bother me. 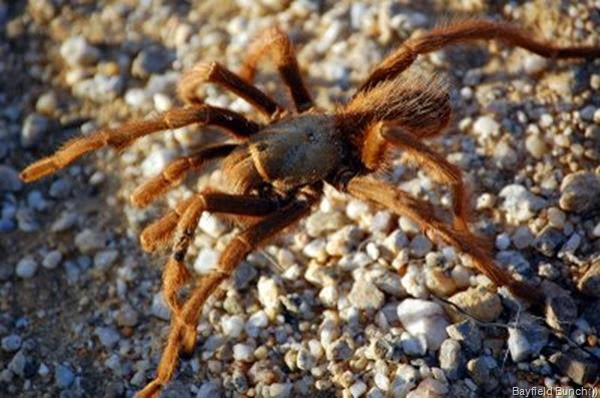 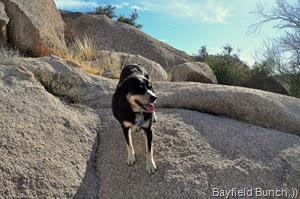 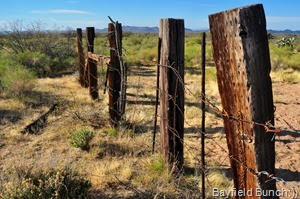 There was no mistaking the 38 pics from our Critter Cam this morning.  It is non-other that wascally wabbits we have under the house.  In other words….Rabbits!!  Kelly also saw 3 of them hopping around near the hole early this morning.  No point in trying to cover up holes because the varmints just dig new holes right beside the old holes.  We’ve heard Fox urine is a deterrent plus some kind of non-killing pellets.  At this point it looks like they are our only options.  Rabbits rapidly beget more rabbits & we could be easily overwhelmed here because of the bunnies being safe from Coyotes inside our fenced yard.  My winter planted Cacti will not stand a chance this summer against families of Wascally Wabbits.

ENTERING THE HOLE UNDER OUR FOUNDATION 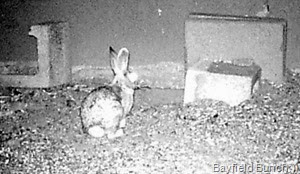 With a new Artu cement drill bit, a fully charged De-Walt drill, & a stack of mustered-up patience I went at the task of bolting our porch posts into the concrete floor of our deck again.  Screws turned out to be too long for the drill bit but I managed to finiggle the bit in the chuck & gain an extra eighth of an inch or whatever to make the steel cement screws flush with the bracket.  Didn’t even have to use any cuss words or throw my hat on the ground even once.  Glad to have that project finally finished.  Nice of Les to lend me his tools. 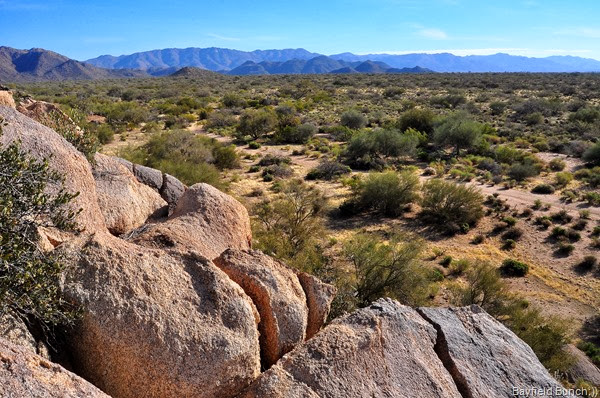 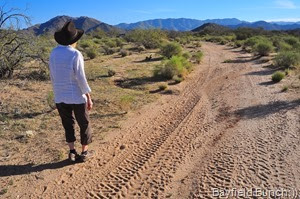 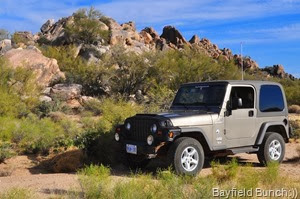 Buoyed by the success of my porch post anchor project I quickly drew up a set of intricate plans & began immediate construction on a 9 man Interstellar Triple-Millennium Falcon Time Warped Star Ship with an Intergalactic Universal Fusitron System.  I’ve calculated this time shifting space traveler will reach the inner most depths of the Andromeda Galaxy in 7.6 nano seconds from it’s launch at 0:600 hours on April 1rst of this year from our back yard……………..10-4:)) 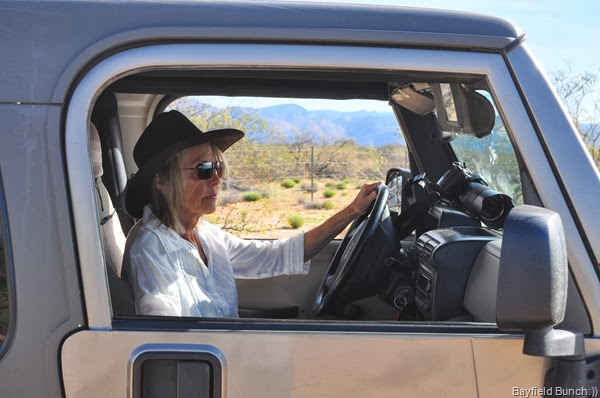 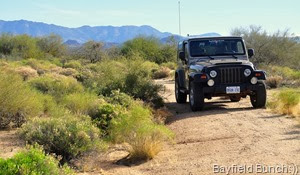 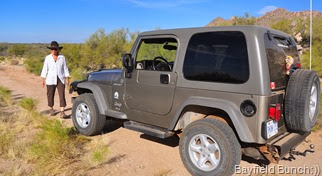 In the meantime just to keep myself sharp I finished painting our utility shed doors this morning. That took a whole half of one hour & nice to have that checked off my ‘to do’ list.  As far as the rest of the day went we just spent it lazing around soaking up all this super great Arizona weather…………….:)) 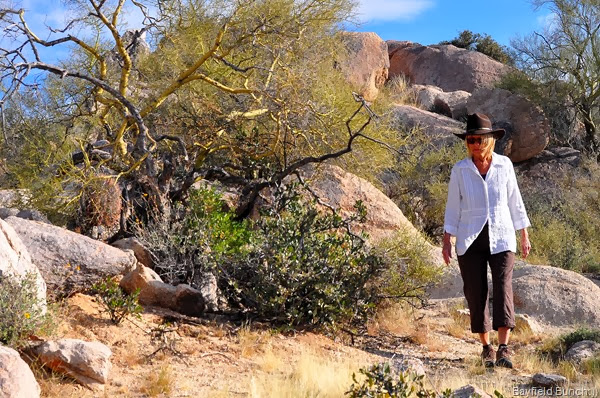 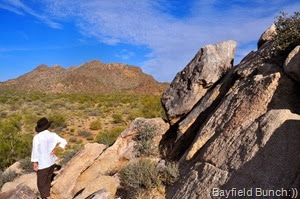 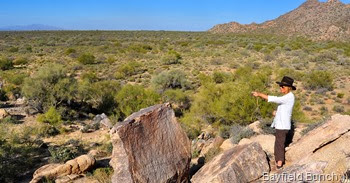 I THINK WE GOTTA GO THAT-A-WAY…..OR WAS IT THAT-A-WAY
We sure had ourselves noisy skies overhead all day.  Had it not been for a mostly sunny day one would have thought we were in the midst of a heavy duty thunder storm.  The American Air Force was hard at work over Congress.  Those daring young men in their flying machines were really putting their F-16 fighter jets through their paces.  Half a dozen times I rushed out of the house to see I could catch a glimpse of the fast moving jets but no luck.  The roars came in fast, turned tightly, & were gone over a nearby mountain ridges before I could get a telephoto lens on them.   I was wanting get the pilot’s name tags…………………:)) 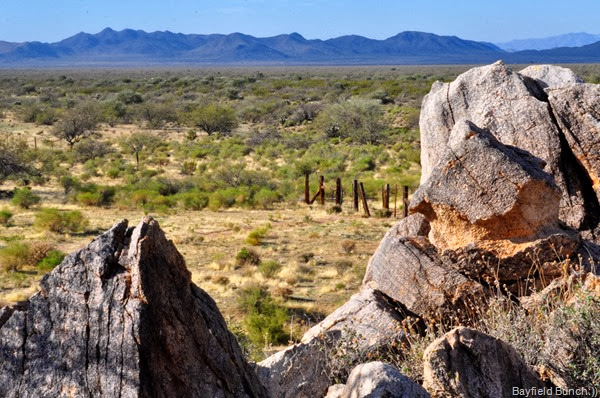 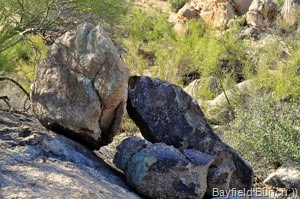 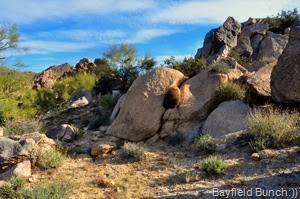 AMAZING HOW SOME ROCKS END UP IN THEIR FINAL RESTING PLACES
Hey it was Chica’s Birthday over JIMBO'S JOURNEYS.  They met a year ago & have been best & closest Pals ever since covering lots of territory in their travels together.  Chica got some new toys & a one year Birthday cake complete with a candle.  Groovy:)) 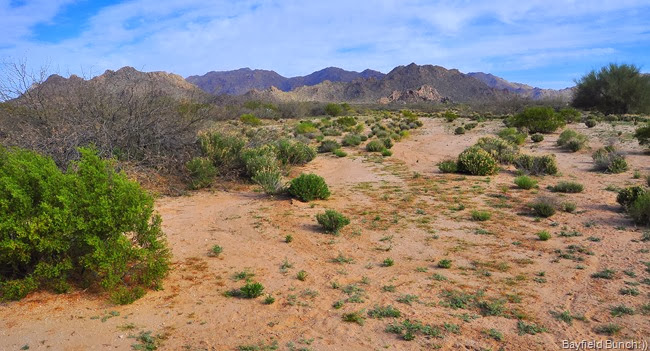 WE SURE DO LOVE OUR PEACEFULLY QUIET & WIDE OPEN DESERT SURROUNDINGS
GROANER’S CORNER:((  A middle eastern King was down on his money and began to sell off his valuables. The last of these was the Star of the Euphrates, at that time the most valuable diamond in existence. He went to a pawnbroker who offered him $100,000 for it. "Are you crazy?", said the King. "I paid one million dollars for this gem! Don't you know who I am?"
The pawnbroker replied, "When you wish to pawn a star, makes no difference who you are."
Posted by Al Bossence at 2/26/2014