THINK I MIGHT HAVE MY GOLD MINE MIX UP MENDED 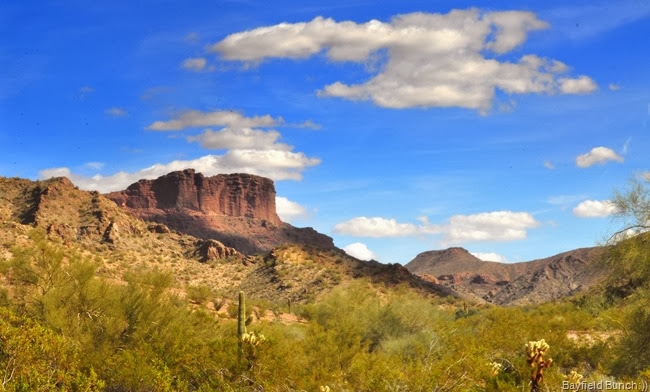 Definitely colder here in Congress than it was south of Quartzsite the past week.  A heavy cloud cover prevented old Sol’s warming rays from putting happy weather smiles on our faces today.  Think we got up to 51F.  We pretty much had to run our heaters in the house for most of the day & I wasn’t inspired to putter away at any outside projects. 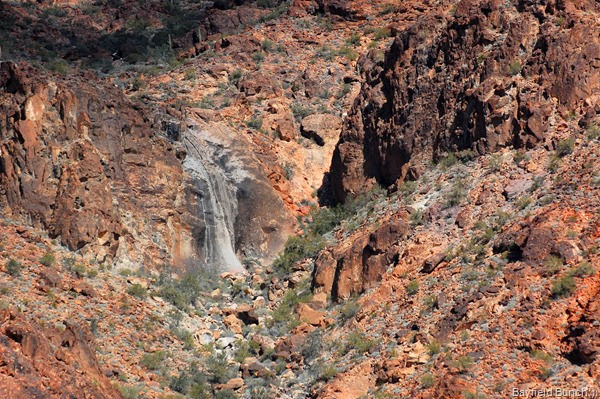 Les dropped over while we were away & put our new wood garden shed doors on.  How nice to be rid of those old bent & twisted noisy aluminum doors that rattled in the wind & clattered every time they were opened or closed.  I just need to throw a coat of outdoor protective paint on them & they will be all set. 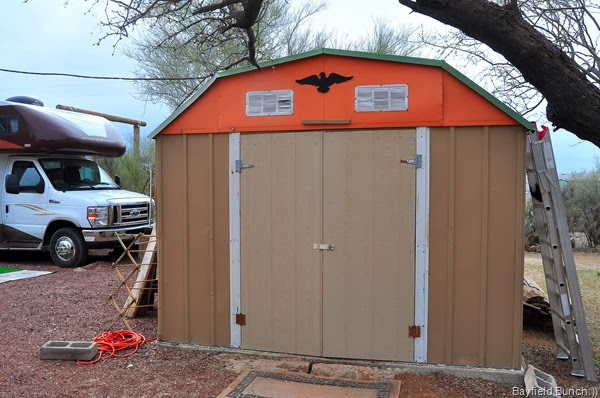 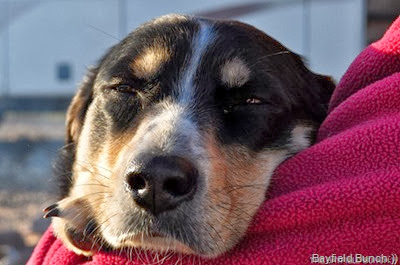 Pheebs is sure glad to be home again stretched full out on her couch or on my lap in the recliner.  She can now jump up on my bed again for scruffles & she loves trying to turf me out of bed in the morning.  It’s very crowded in the Winnie with the 3 of us all scrunched up on the short sofa.  Difficult for me to write & edit photos with no space to set cameras or use my mouse.  Tried reversing the front seat for awhile but that proved uncomfortable after a short awhile as well.  So it’s nice to be home & s t r e t c h out. 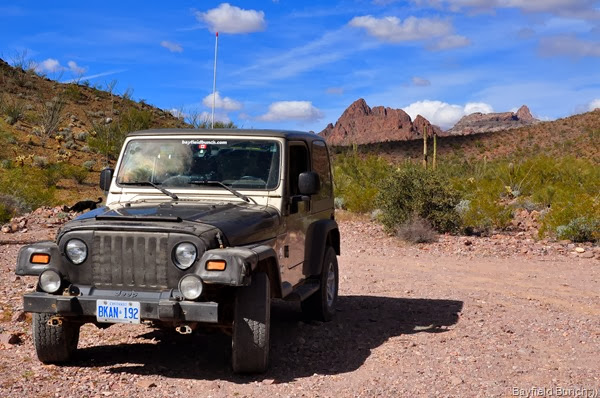 MOUNTAINS IN BACKGROUND ARE LOCATED BEHIND KOFA’S PALM CANYON

Rene over at live. work. dream. has good things to say about an informative book out now entitled, ‘So You Want To Be A Workamper’.  Rene & Jim have been Workamping & Volunteering around the country for about 7 years now & found this book accurately depicts what they have themselves been experiencing.

I am in agreement with Nick’s latest post in BAD NICK'S BLOG.  Looks like the majority of comments are in agreement with him as well.  Always encouraging to know there are other folks out here living in the real world & seeing things for the reality they unfortunately are. 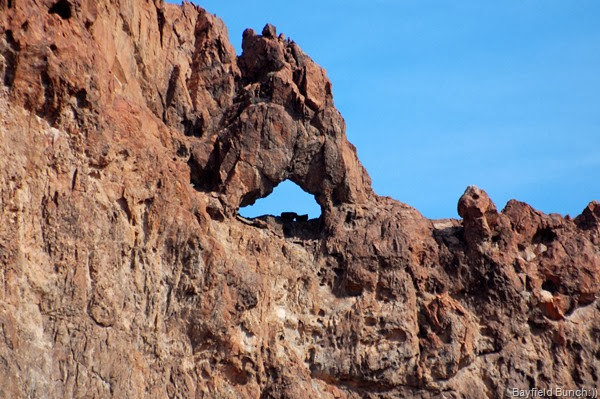 Curious to know if any RV readers have a Class A Motorhome with what is known as a 3 zone floor plan.  This is generally a mid door entry coach with separate bedroom & bathroom in back, separate kitchen in the center & separate living room up front behind the driver’s area.  Gulf Stream has this plan in some of their Sun Voyagers.  Just curious…………..

With Ann’s note in the Shout Box I think my confusion has been cleared regarding my mixed up mine dilemma.  There is a third mine in the Kofa Mountains we did not know about.  And this one comes with a cemetery so you know we would have been over there had we known about it’s existence.  It is called the King of Kofa Mine & after receiving an email from a reader today with the GPS co-ordinates to the cemetery I was amazed at just how close to that cemetery we really were when we reached marker 21 & turned around.  Also learned the buildings we saw near the 2 mines are what is left of the Kofa mining town.  Ann said a mine caretaker lives there now.  Also some additional info from a friend near Sierra Vista helped as well. 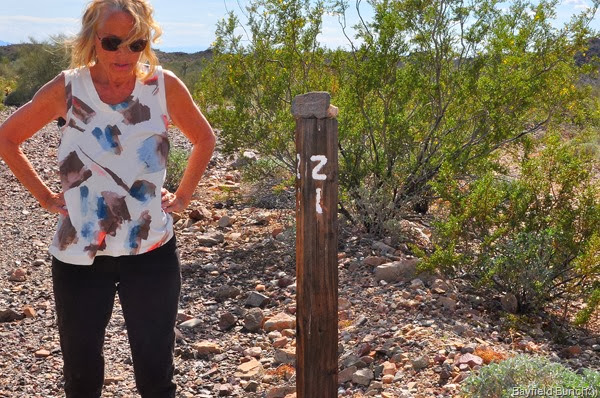 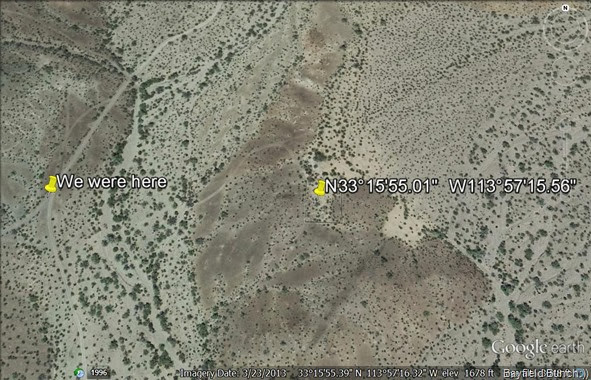 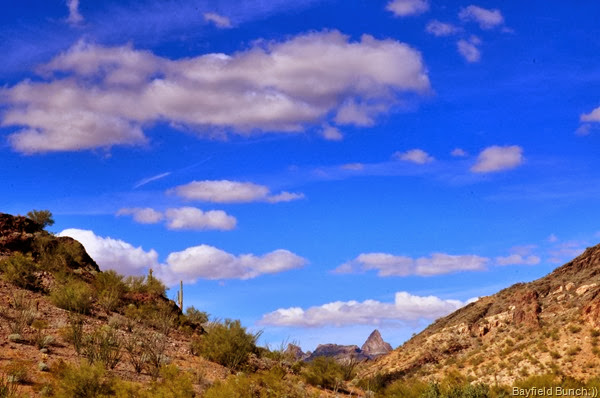 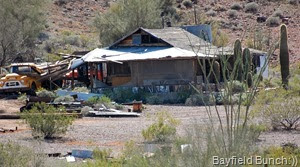 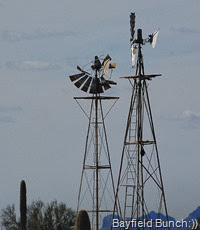 I have always thought anytime one mixes the desert with water it can make for some nice photos.  Could be a water hole somewhere, a river, a lake, or even a puddle in a rock crevice.  Just think what dusty & weary desert travelers must have thought when coming across any source of water after long days on the trail.  There are a few fellow RV Bloggers out here who travel with canoes & kayaks out here in the desert regions.  Bob over at BOB'S EYES is one.  JUST WANDERIN is another one.  SUE has a Kayaking hobby as well.  And remember to keep an eye on John over at JUST FINDING OUR WAY.  He is one of those clever innovator fellows who is right now working away at building a kayak.  He just recently finished helping a friend build a Dory & if you backtrack John’s post you can follow that project.  For all you ‘do it yourselfers’ out here it would be a good idea to keep track of John’s posts to see what innovations he always seems to be up to.  Whether his RV or whatever…… 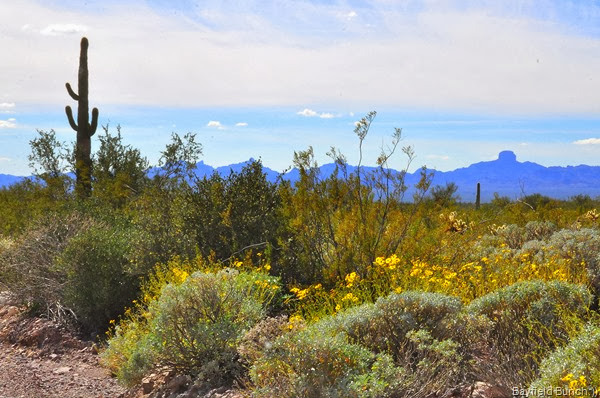 Noticed two recent additions to our Blog Follower Friend Connect list on our sidebar this morning.  We welcome AUDREY THE REDBONE.  Audrey the Coonhound is currently undergoing chemotherapy so we doggy people here at the Bayfield Bunch are wishing her the best outcome.  And why was Audrey the Coonhound named Audrey?  BECAUSE:)).  Also joining us on our travels & stay at home times is HighwayManNL.  Thanks for stopping by & taking an interest in the Bayfield Bunch:)) 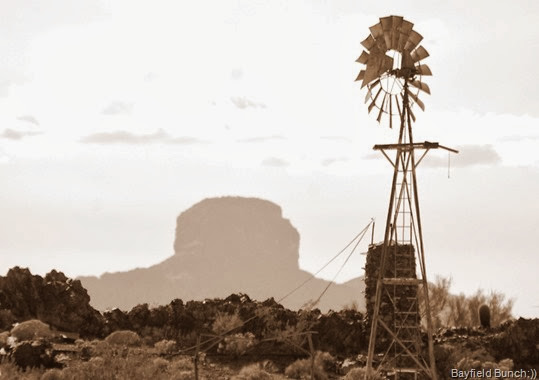 GROANER’S CORNER:((  Murphy's wife borrowed his car and parked in the supermarket car park. Just as she came out laden with shopping, she saw a young lad break into the car, hot wire it and drive off.  Naturally she reported the matter to the police.' What did he look like?, the sergeant asked.  'I don't know she replied, but I got the license plate number'.

"My wife and I have structured conversations...
First, she gives me her opinion,
Then she gives me my opinion."