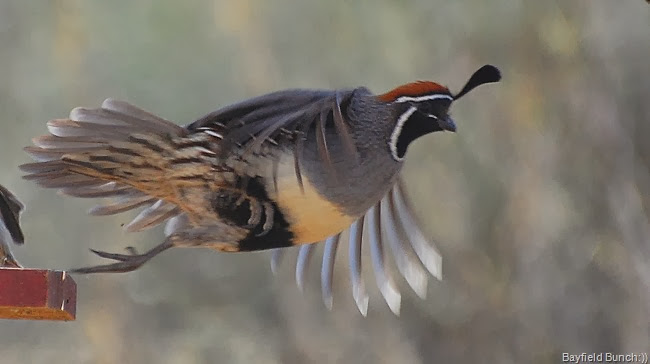 As any Class C RV owner knows it is just about impossible to get up & clean that front cab & windshield area.  Just cannot conveniently reach them.  Despite previously owning 2 Class C’s how soon I forgot that.  There I was this morning wiggling & wobbling atop a ladder trying to re-wash that front cap & upper windshield.  It just wasn’t happening.  Discouraging!!  Also discouraging is our hard water here.  I was reminded of that when looking at all the tough to remove white spots on Winnie’s chrome, etc.  Made a mental note to self……do not wash the RV again here at our Congress house no matter how dirty it gets.  I figure those white chlorine & other chemicalated spots are probably more harmful to the rig’s finish than good old dirt.  Problem is that we also have the same type of chlorine infested hard water back in Bayfield.  If push comes to shove Winnie just may end up being known as ‘Winnie the Mud Puppy’. 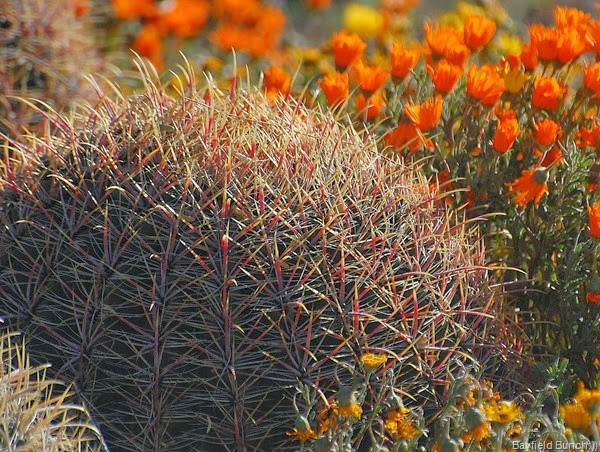 By 10 o’clock this morning temps were really coming up & dare I mention the ‘hot’ word by noon.  Kelly busied herself cleaning the rig’s interior before it got too bad.  Winnie is pretty well all spiffed up now & ready to head back out onto the highways & desert roads to get herself dirty all over again………………Me too:)) 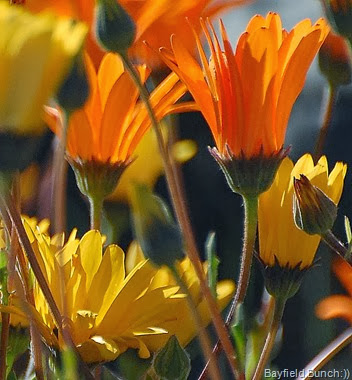 So how are we doing on our first day with Millenicom.  Well it’s much the same as Verizon.  Our 4G speeds are slow & spotty & that is simply because we are in a very slow & spotty 3G area.  Not Millenicom’s fault.  People a quarter mile up Ghost Town Road from us have no internet signal whatsoever.  We have a feeling our older 3G Sleek antennae may not be helping boost the signal on our newer 4G Jetpack Millenicom.  We have no choice here at our house location but to wait until tower signals are boosted some day for a stronger signal.  At least our internet has improved from when we first bought the house back in March of 2012.  We even had to walk out to the road to use a cell phone back then. 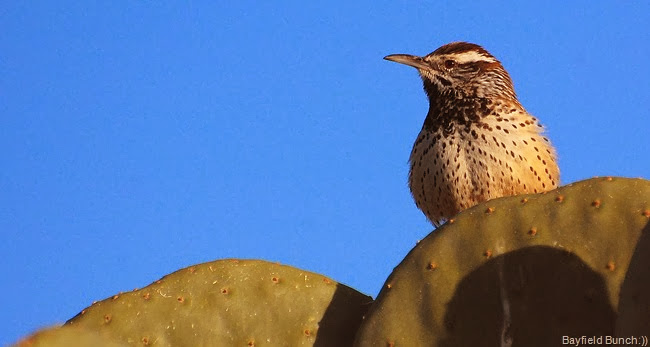 Gaelyn from GEOGYPSY just had her computer stolen.  And that includes all the photos from her current trek through South Africa.  And stolen from a locked truck too.  Can only imagine how disheartening this must be for her. 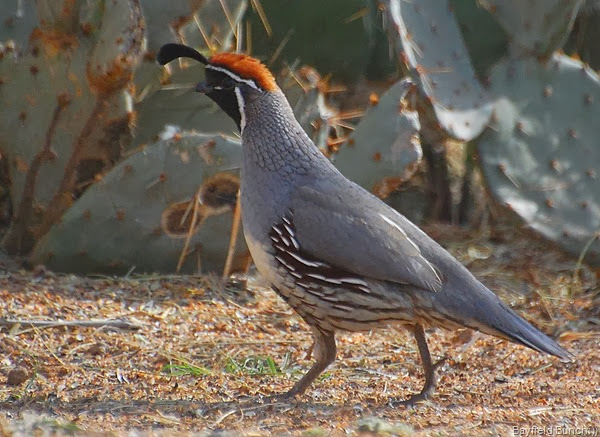 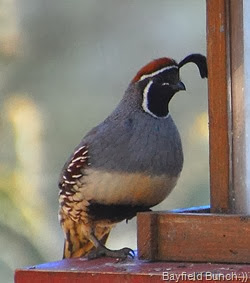 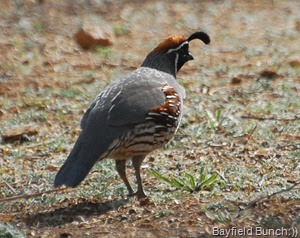 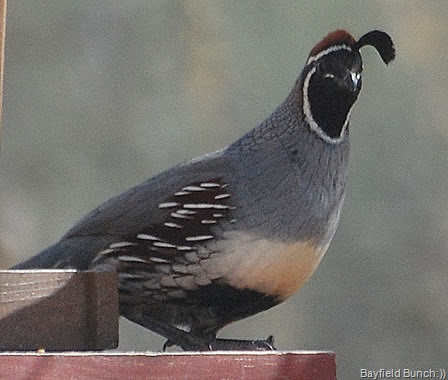 Sarge (John) dropped over this afternoon with a magazine article he thought I might be interested in.  It was an Escapees magazine dated July/August 2011.  Article by Terry ?? was entitled, ‘No Place To Hide’.  A humorus look at ‘Confessions of an Introvert.’  Well I sure could relate to that article all right.  Could have written it myself only not nearly as well asTerry wrote it.  I sure agree with this fellow’s thoughts.  Definitely not easy being a daily blog writing Introvert in an RVing society mainly consisting of very sociably minded Extroverts.  Terry, whoever or wherever you are out here, know that you have a soul mate & can sign me up for your ‘Shy Guys’ club anytime.  We’ll never likely meet of course but that’s quite all right. Just go ahead & sign me up anyway & you know I will truly be there by my absence……:))

While Sarge was here he came up with a solution to my broken hot water tap in the bathroom & now I have a turnable hot water knob on my sink again.  Well it’s actually the cold water knob Sarge switched over but hey I’d sooner have hot water anyway.  Also while here Sarge noticed a growth in one of our Mesquite trees called Mistletoe.  No not the kissing kind but the ‘killing the tree’ kind.  He had a heavy duty pruner with him & lopped off some branches while I was able to use his Swede saw & saw the Mistletoe infected branch off.  Thanks Sarge, you are one handy guy & I’ve been playing with my now working hot water tap all afternoon:)) 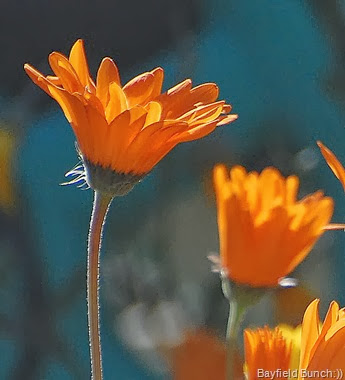 Yes ED we knew we could buy PJ’s on-line but sometimes one just likes to have an eye to eye with a PJ purchase first.  We were going to be in the city anyway a few days ago so thought we’d drop in & eye up some Jammies.  I want the one’s with Gummy Bears & not Dinosaurs & Dragons to chase me through my dreams every night.  My old PJ’s still have a mile or two left in them but you will be happy to know I do have 2 new pair of warm flannel PJ’s on the way thanks to Amazon.com & Kelly.  And they had darn well better have Bears on them too!! 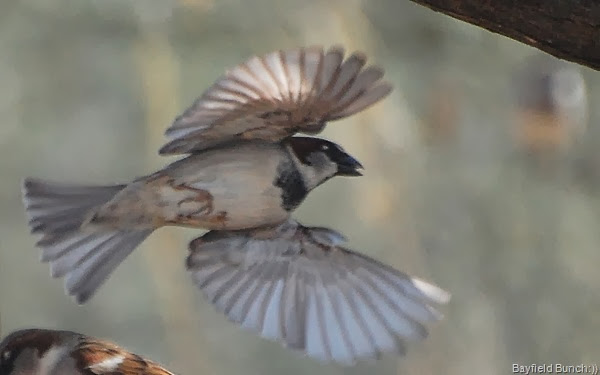 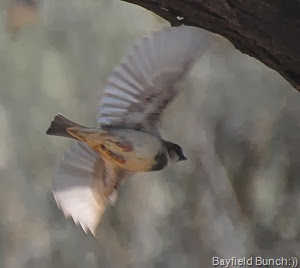 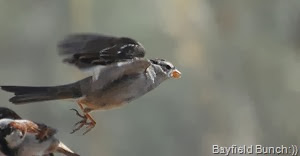 Watching the 50th Anniversary Beatle Tribute Sunday night I was again reminded TV is not all bad.  Had we not had TV or a network satellite feed we would have missed that great show.  I know I rail on sometimes about TV’s crappy programing & it is true, there is a lot of really crappy programming on.  However there is a positive side to television as is there are with most things.  If one is selective & if one’s interests are in areas other than mainstream schlock there is much to be learned from television besides just being entertained by television.  Same thing can be said of computers.  I would never want to be without the option of a TV in the house or rig just as I would not like to be without the option of a computer.   Selective & quality TV watching can be a very useful educational & information gathering tool.  Again, same as a computer.  However, I do find watching television consistently can soon become boring but then again I find most repetitive things boring after a short while.  Anyway, as much as I bash television sometimes one just has to open their mind to find, understand, & accept the good in it.  And it’s there……………………. 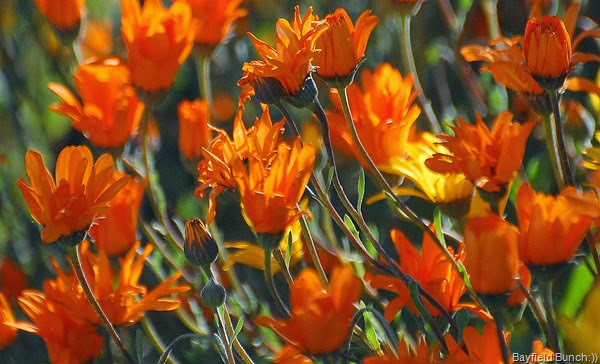 I know I may sound repetitive when I say this but there are some things that do need repeating.  Just a short note again to say Thank-you to all you Blog readers out there who have taken the time to respond to our Blog over the years whether publicly or privately through emails.  Thank you all so much…………..AL:)) 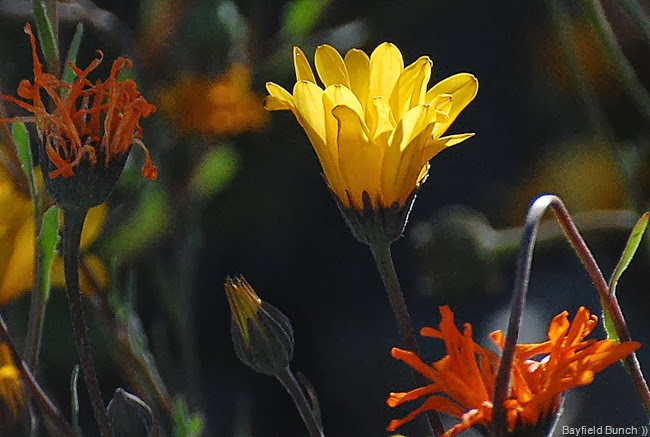 GROANER’S CORNER:((  Nurse: 'Doctor, Doctor the man you've just treated collapsed on the front step. What should I do?'  Doctor: 'Turn him around so it looks like he was just arriving!'

A mother complained to her Doctor about her daughter's strange eating habits. 'All day long she lies in bed and eats yeast and car wax. What will happen to her?'  'Eventually,' said the Doctor, 'she will rise and shine.'

When I was born the Doctor took one look at my face .... turned me over and said. Look ... Twins!

Amy to X-ray technician after swallowing some money:
'Do you see any change in me?'