OH HOW I LOVE MY STEAMY LONG HOT SHOWERS IN A SPACE LARGER THAN A SHRUNKEN BROOM CLOSET…….. 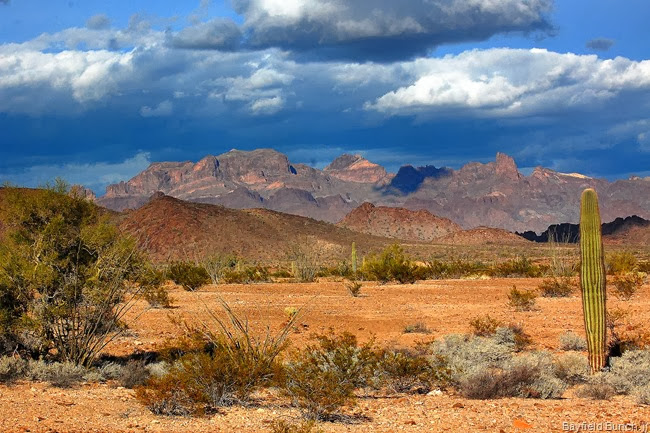 I am really, really, really, really, going to try & write a shorter post tonight with a whole lot less pictures!!  Many photos taken this past week didn’t make it into my posts simply because there was not enough room for them so I’ll include some of those over the next little while such as the one’s below. 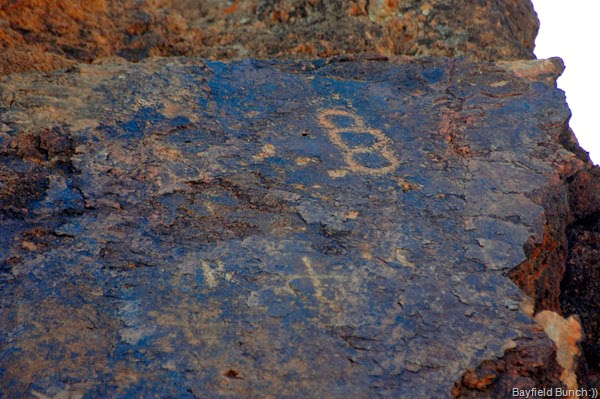 MORE PETROGLYPHS TO THE UPPER RIGHT OF THE GRINDING CAVE

We picked a good day to head back to Congress.  Had us a cloud cover overhead again so it wouldn’t have been a good photo morning anyway.  Just as well though because I am needing a photo break.  With Tuesdays photo load of 253 pics it took me a long time yesterday to get through & edit them all.  And with a slow internet connection at our Kofa location it took so long to publish my post I fell asleep & had to restart the post when I woke up this morning.  After 5 days of jostling Jeep rides, rock scrambles, hiking, & hours of photo editing, we really needed to head home for some R&R.  Loved every minute of our time away though:)) 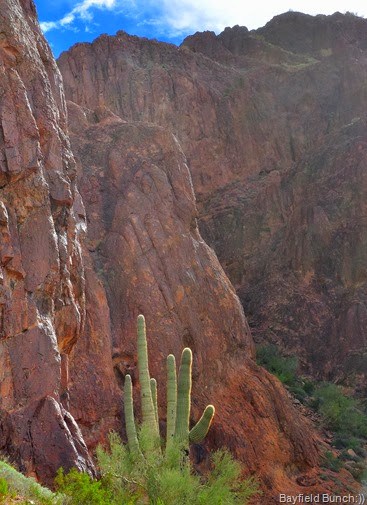 We rolled out of our Kofa campsite about 8:30 a.m.  We knew GEORGE & SUSIE were camped somewhere close to JEAN & SKIP south of Quartzsite in an area we used to boondock a few years back but it’s a big place & we decided not to drive through there looking for them.  Besides 8:30 in the morning is not the time to unexpectedly go knocking on someone’s door scaring the Holy Ba-Jeebers out of them.  It is still possible for Seniors like ourselves to be in various states of grumpy fog at that hour.  Could be dangerous so  with a nod & a wave we motored on by heading north on 95. 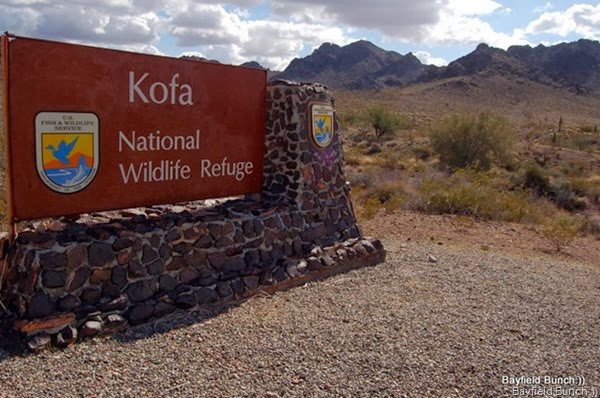 After our usual McDonalds pit stop in Quartzsite for a grease job & coffee we were eastbound on I-10 for home.  Fifteen minutes out of Q we turned northeast on highway 60 for a relaxing hour & a half drive to Congress.  I love heading home just as much as I love leaving home on our boondocking adventures.  Best part of getting home is always that long shower in a space larger than a shrunken broom closet complete with an endless supply of steamy hot water:))  But you can bet that for sure next month at this time I’ll be chomping at the bit to be on the road again heading somewhere for more boondocking, writing, & photo adventures.  Wouldn’t have it any other way……:)) 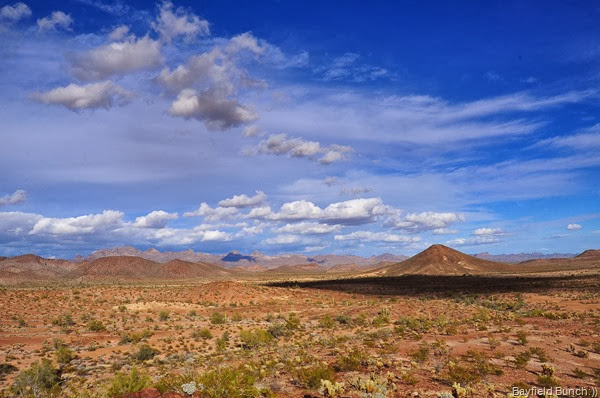 A CLOUD SHADOW DRIFTS LAZILY ACROSS THE DESERT FLOOR

Thanks to good friend & Kofa Refuge host Ann for pointing out the endangerment of the Bat species due to the White Nose Syndrome.  We were unaware of that & had no idea entering a mine shaft could be detrimental to Bats.  Wonder if the Kofa personnel have thought of putting wire fencing across those entrances two thirds up keeping people out but allowing Bats to still enter & exit through the top third.  Maybe a ‘No Trespassing’ sign with an educational explanation of why.  And thanks to Ann again for leaving this explanation in our Shout Box regarding the Bighorn Sheep butting & pawing at that Barrel Cactus.  Ann says…."Regarding the desert Bighorn Sheep and the Barrel Cactus. The Bighorn can go up to a month without drinking water. On a regular basis they will use their horns to knock over the barrel cactus; they eat the cactus for its high water content”. 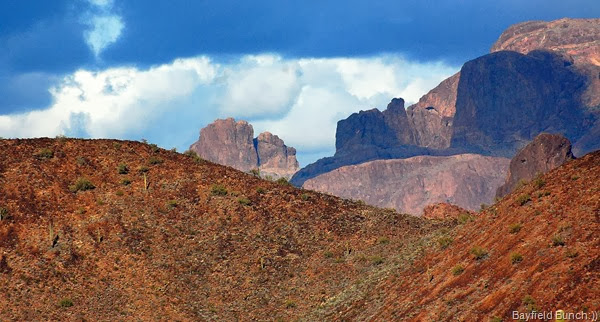 Also regarding another question about the mine site my uneducated guess about hazardous material in the those mine tailings is ‘probably yes because Cyanide was commonly used in many mine operations in the processing of mine contents.  I think it’s safe to say those tailings probably have been through some kind of chemical process. 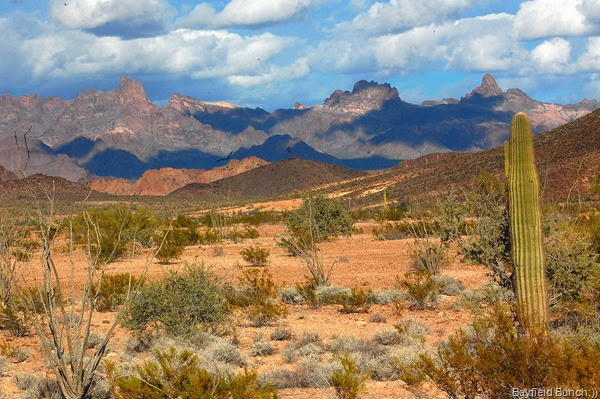 Another good friend & reader down around that there Sierra Vista place pointed out I had mis-identified the King Of Arizona Mine.  I poured over some internet maps this afternoon plus my Benchmark Atlas & the Kofa brochure map we were using.  Both the Kofa map & my Benchmark Atlas point to the King Of Arizona mine where I identified it.  The internet map indicated this same location was the ROB ROY MINE.  Being familiar with the road layout between the North Star Mine & the other mine (both within site of each other) in question tells me the King Of Arizona Mine & the Rob Roy mine are both one & the same mine.  Maybe Kofa Refuge hosts Ann & Bill could clear up the confusion for us……….. 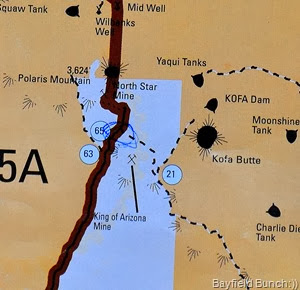 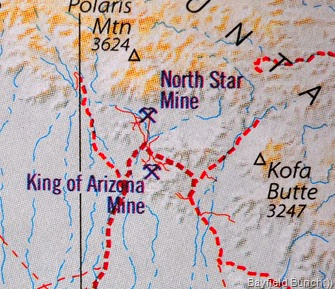 LEFT IS THE KOFA BROCHURE MAP WE WERE USING & RIGHT IS MY BENCHMARK ATLAS…BOTH SHOWING NORTH STAR MINE & KING OF ARIZONA MINE ABOUT A MILE & A HALF APART…THIS MAP PLACES THE ROB ROY MINE SITE IN THE SAME LOCATION…….??

Wasn’t until I was editing some photos a couple days ago that I saw I had once again done something really, really, dumb.  I am going to go as far to say I just may be the only one who has ever done this for an entire day.  Or maybe this is just common for us wannabe Cowboy guys.  Sure shoots holes in my dusty trail weary Cowpoke status though.  It was the day we went to Yuma & it was the day we met SASSY.  Kelly had taken some photos of Sassy & I.  I thought something looked odd about my hat in the pictures.  I enlarged one of the photos Kelly took when I had my back to the camera & DAM!!  Would you believe I had my hat on BACKWARD!!   Yep it’s true & I had it on all day that way.  No wonder those Senior Walmartians were trying to run me out of the Yuma Walmart store with their carts Monday.   And then I meet a well known fellow RV Blogger for the first time & have my hat on backwards.  Sometimes I just don’t know about myself.   Had a similar thing happen the first time I met DESERT DIVA a couple months ago in Borrego Springs.  Had a shower that morning & put on a clean shirt.  And as is so typically me I then went outside & moved some big soot covered fire pit rocks around.  Front of my shirt was dirty & I didn’t notice it.  Can only imagine what Desert Diva thought when she met me.  Slob!! 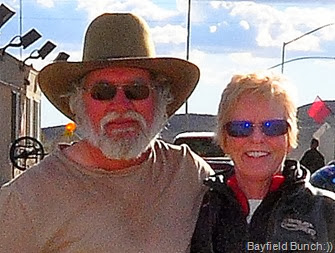 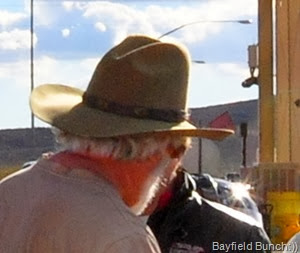 I NOTICED IN THE LEFT PHOTO WITH SASSY MY HAT TOP LOOKED TOO HIGH…YEP, RIGHT PHOTO SHOWS MY HAT ON BACKWARDS ALRIGHT

So now that we have been out on our third boondocking venture with our Winnie Wagon how are we adjusting to the smaller living space of a 26’ Class C from a 33’ Class A.  Well I would really like to tell you that we think it’s the Cat’s Meow & we’ve never adjusted to any one thing better & never been happier.  However…..I can’t tell you that.  We have us a great little rig here but we’re kinda feeling like a couple of aged Dinosaurs in a Volkswagen Beetle.  Never thought for a minute I would have any trouble getting in or out of that bunk over the cab but then again I never thought for a minute I was 69 years old either.  My recent tumble out of that bunk awhile back reminded me that despite what I think, I do not have the agility of a teen-ager anymore.  The on-going Arthritis problem in my legs is slowly gaining ground on me.  No problems with our coach whatsoever.  The problem is us & our desire for more livable & more comfortable space.  Yes I know we do not spend as much time in our rig as we used to so why are we still finding the desire for more space?  It’s an age old RVing topic with many pros & cons, thoughts & opinions of course & it just depends on what order one has their own priorities prioritized.   Does this mean we are in for another change somewhere down the road?  Not necessarily.  These are only thoughts, not plans.  And we all know how we RV’ers think about things a lot………… 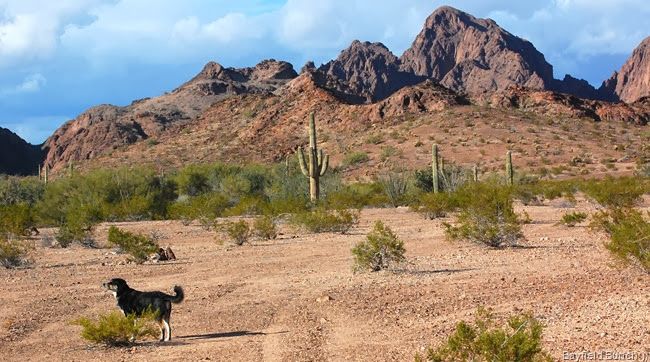 GROANER’S CORNER:((    A policeman stops Mavis just outside the city of Tucson Arizona, and asks to see her driver’s license.   He says rather peremptorily, 'Lady, it says here that you should be wearing glasses.'

The policeman replies gruffly, 'I don't care who you know, my dear. You're still getting a ticket.'