COULD THERE BE TRAVEL PLANS AFOOT…………Hmmmmmmm 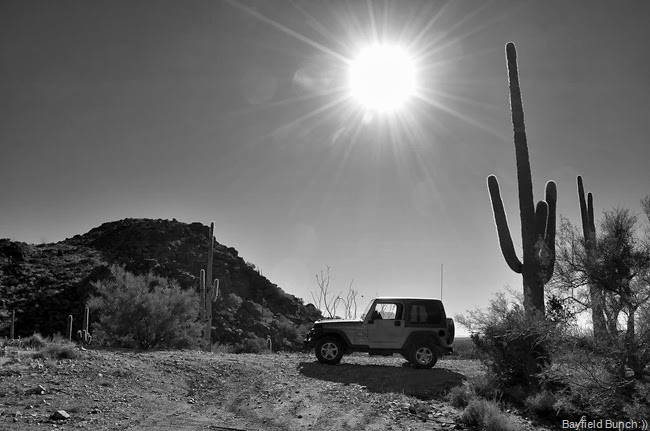 It was already warming up before 9 a.m. so we didn’t figure we had better go anywhere too far.  Coolest place is always in the house.  Had thought of checking out the Wickenburg Massacre site but with temperatures ramping up fast we have to be aware of snakes now.  There will be Rattlers out & about so we do not want to be clambering around rocks anywhere.  We met a couple on the trail a few mornings ago & they were telling us about the Mojave Rattlesnakes in this part of Arizona.  It’s an aggressive Rattler & it is the deadliest of Rattlesnakes.  While this warmer weather is upon us we will have to get out for our morning desert walks earlier when it is cooler & the snakes are still in their dens………….. 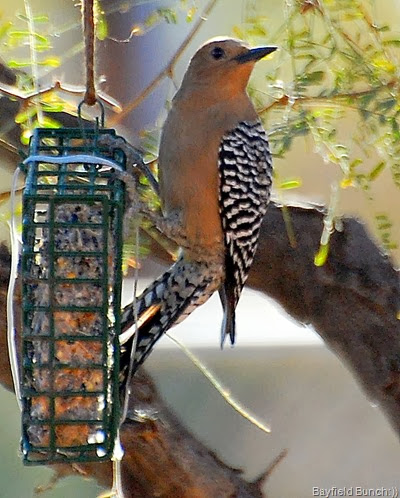 <<< GILA WOODPECKER IN OUR FRONT YARD THIS MORNING

It is day 3 with our new Millenicom set-up & what a change there has been since the first day.  Millenicom seemed to stumble it’s way through the first 24 hours.  It was slow & spotty & at times & refusing to connect.  Seemed like we had made a mistake as we both thought maybe it was not as good as Verizon.  And then Monday night it seemed to find itself, grab the lead & run with it.  Now we did move the small antennae around quite a bit Monday trying to find the best location.  I even had the JetPack on the roof of the rig at one point.  Walked all around the house inside & out trying to get the JetPack’s indicator up from one bar.  I re-positioned the small antennae on our metal paint can lid & that helped.  Also found a spot in our end bedroom with a window facing southwest that boosted the signal.  We are sitting at 3 out of 4 bars now & Millenicom is cooking right along.  What a pleasant change.  So far 2 thumbs of for Millenicom.  Of course I’ve probably gone & jinxed it now by writing about it…………….. 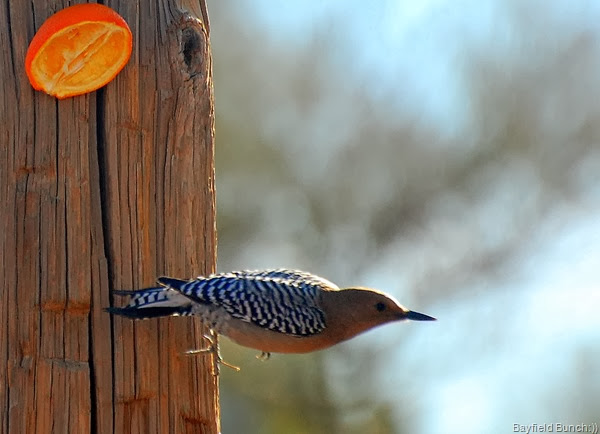 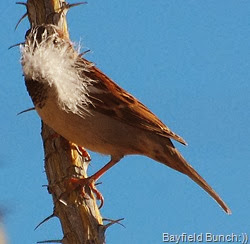 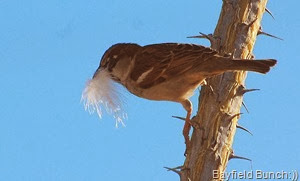 Received this email from reader Jim today.  He said, “Hi Al, Just looking at your place on Google earth (slow day here at work). New imagery shows the Winni Wagon in the driveway. Pretty cool”.  Well I had to have a look for myself & sure enough it shows Winnie parked out in front of the house on December 2nd 2013.  Must have been unloading it from our Borrego Springs trip before parking it in it’s spot at the end of the house.

For folks traveling together for long periods of time stress levels can play an important role in their daily lives.  If everything is going fine those traveling stress levels remain in check just contentedly bubbling along under the surface somewhere.  But add a problem here or a glitch there & stress levels can soon come bubbling to & through the surface.  How about a stuck leveler on the Motorhome or maybe an old aging battery refusing to start the coach.  Or what if both things happen at the same time & both parties have different solutions to both problems.  Oh, & throw in an A/C that quits.  Well you can see where I’m going with us but I’ll let Sherry over at IN THE DIRECTION OF OUR DREAMS tell you how they are handling things:)) 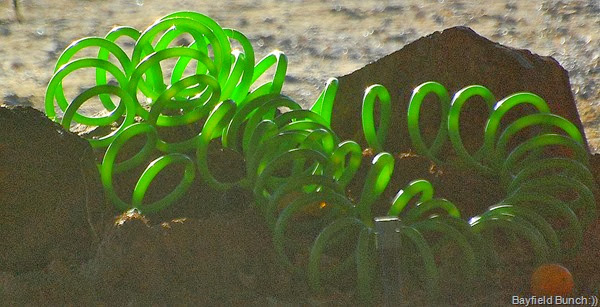 Below is a couple images from Grand Bend back home in South-Western Ontario.  ‘The Bend’ is only a 20 minute drive south of Bayfield.  Camera is located in a lighthouse replica building overlooking the Grand Bend Yacht Club.  Pictures were taken this morning.  One image shows some buildings & a frozen river.  Second image shows Lake Huron frozen out for as far as the eye can see.  Although very pretty I sure am glad we are not there this winter again. 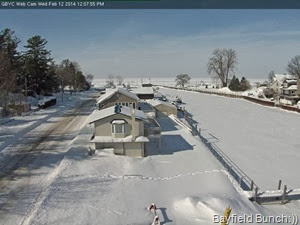 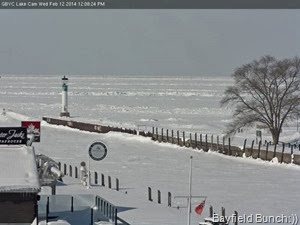 Had ourselves a very slow day.  Pheebs & Kelly went to the Library & Post Office.   That was about the extent of any activity for us.  Couldn’t even get myself into ‘paint mode’ to finish the shed doors.  However all is not lost.  Could there be some travel plans a brewin….hmmmmm. 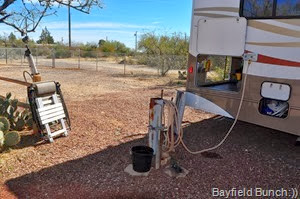 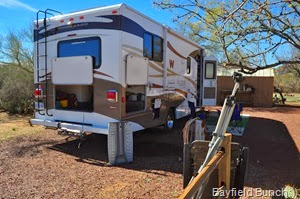 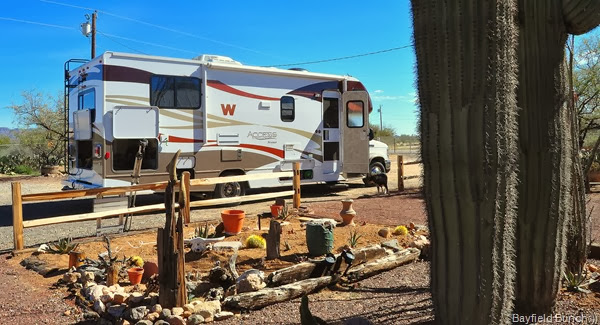 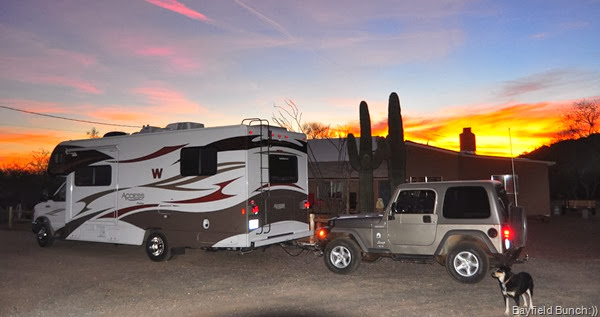 GROANER’S CORNER:(( A priest goes into a barber's shop sits down, gets a good haircut, thanks the barber, and asks how much he owes him.  The barber says, 'Father, you're a holy man, a man of the cloth there is no charge you.'  The priest blesses the barber and says, 'Thank you very much' and goes about his business. The next day, 10 gold coins magically appear on the barber's doorstep.

A few days later, a Buddhist monk goes in for a shave and a shine, and when the time comes to pay the barber says, 'No money, please, you're a spiritual leader, a man of the people, it's on the house.' The next day, magically appearing on the doorstep are 10 magnificent rubies.

The following week a rabbi comes in, gets a haircut, goes to pay and the barber says, 'No, Rabbi, you are a learned man, a wise man, I can't take any money from you, go in peace.' Next day the barber opens his shop to find……… 10 more Rabbis waiting for a haircut!!