I wisely by-passed a big wad of cookie butter this morning & got on with other things.  I’ll be so glad when that jar is empty in the next 20 minutes. 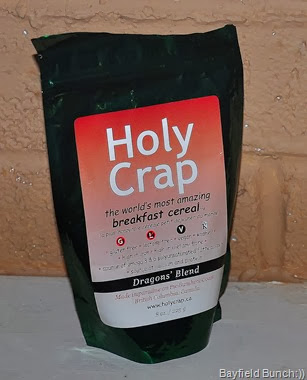 <<< THIS IS WHAT KELLY EATS FOR BREAKFAST

Now….before I forget again.  Nancy 1340 in a few comment questions asked…… “What kind of grains does Kelly eat for breakfast”. “Does she put milk of some kind on the”? She is so slim I'd love to know about her diet. Not "diet" as in weight loss diet but daily eating style……..Ok, Kelly eats Chia, Hulled Hemp Hearts, Buckwheat, Cranberries, Raisins, & a little bit of Cinnamon.  Two tablespoons of the grains & 4 tablespoons of Skim Milk.  It comes in a package called, ‘HOLY CRAP.  As far as eating style goes a typical day for Kelly might be a hard boiled egg mid morning, bowl of soup for lunch, & green tea or Yerba Mate in the afternoon.  Meat & veggies for supper.  After supper snacks are mostly Almonds.  And Kelly does drink a lot of water.  She did have one of those schnazzy milkshake/coffee thingamaguzzlers from Starbucks in the Safeway store this morning.  And no you do not want to know what AL eats every day to keep his rounded shape.  I wouldn’t have enough energy to type that list out!!  Nancy also asked….."Do you have a link for Doug & Dolly's blog”?  Yes I do but Doug asked me not to publicize it.  His blog is for his family.  I respect that but have asked Doug to let me know if he changes his mind at some point because I would like to include his blog on our side bar.  He writes a fine blog & has a clever sense of humor:)) 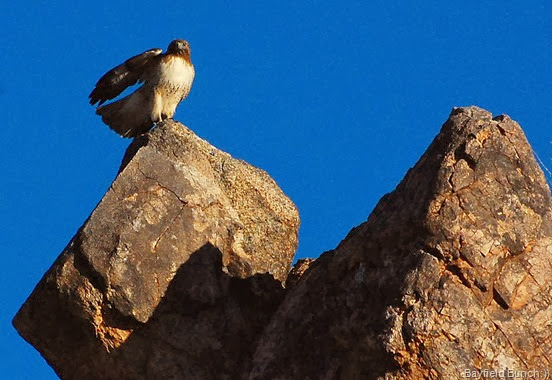 Readers know I am not fond of white.  Every time I see something white I want to get out my brush & paint it some other color.  Our front door is white & I just don’t feel it fits with our South-West theme.  I have painted the outside screen door a Taos Blue & the frame around the door a clay pot color.  House of course is Adobe brown.  Any ideas on what color to paint that white door………….. 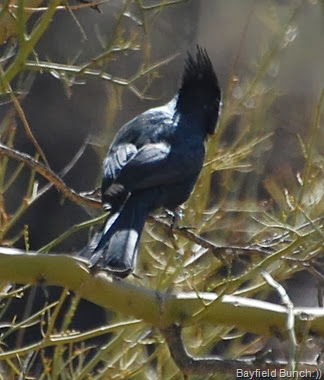 And it seems there are some murmurs, rumors, & changes going on in Slab City with a big possible announcement coming this Sunday.  Check in with Rene’s latest post at LIVE. WORK. DREAM.  This will be of interest to all you closet Slabbers out here:)) 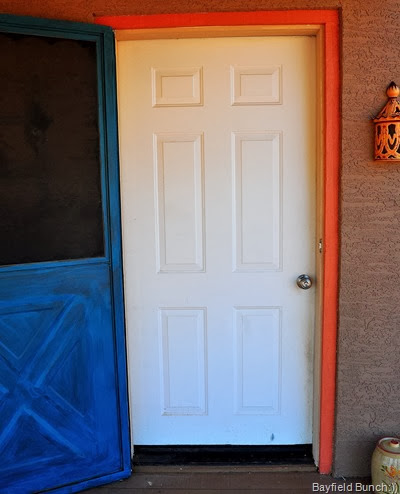 Kelly had a fairly lengthy shopping list for groceries at Safeway in Wickenburg this morning so I decided I had better go along to help with the heavy end.  Good thing I did. We spent the most amount of money on groceries ever.  Had to borrow a fork lift from a construction site nearby just to get the whole pallet load of groceries to the Jeep.  Geeeezzzz, where was our utility trailer when we really needed it!! 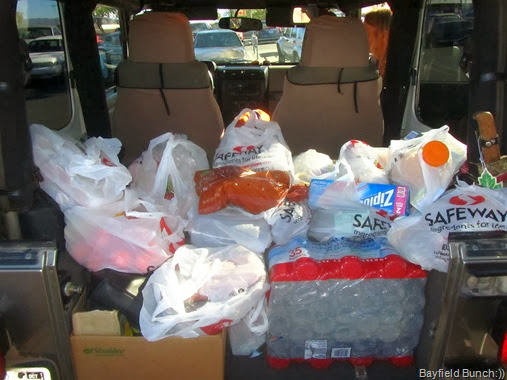 I don’t know about the rest of you guys but grocery shopping is not one of my favorite things.  I can go & work outside on my gardening projects for hours without a break but plowing around in a grocery store for 20 minutes on the end of a shopping cart has me so weary I could fall on the floor.  My only saving grace is leave the support of the grocery cart & go off by myself on a great solo adventure quickly & purposefully making my way up & down the steep canyon aisles looking for an allusive bar of soap or maybe a Fig Newton bar or two.  The allure for me is the danger lurking between the mountainous towering shelves.  At any second I can be run down by a crazed herd of woman pushing loaded shopping carts ahead of them heading for a sale item in aisle 36.  I say a herd of woman because no where will you find a herd of men in a grocery store.  They’re all over at the local coffee shop spinning yarns & telling tall tales of days gone by when their wives forced them to push grocery carts up & down supermarket aisles.  Enough hot air coming out of those guys to keep their coffee perked. 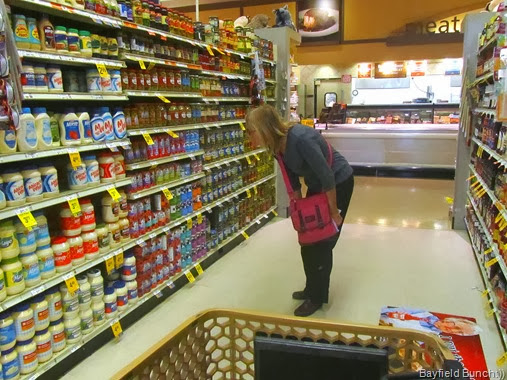 How many times have you been laboriously pushing that overladen shopping cart around when you’ve heard the words & again been mis-lead by the line, “well, that’s it.”  How many times have I fallen for that line thinking our shopping was finally done & we would be heading for the cashier knowing I would soon to be outside in the glorious sunshine.  It’s usually about a mile from wherever we are in the store to the check-out & between me & shopping freedom stands about 2.7 million grocery items.  There is not a snow ball’s chance in hell we will make it to the gate without me being repeatedly fooled by those words over & over & over along the way.  “That’s it”.  BS that’s it!!!!!! 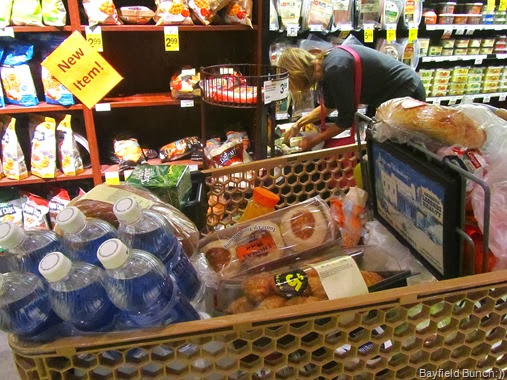 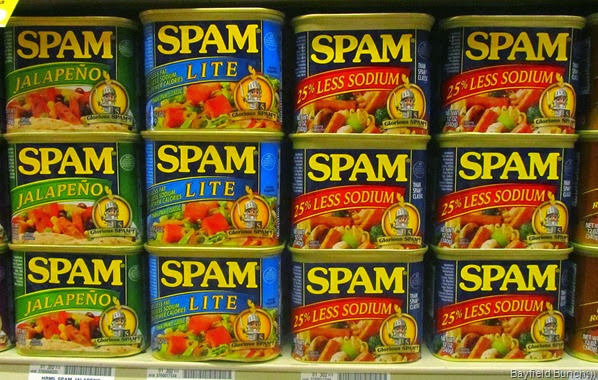 Amazingly enough we were home before noon unpacking about 6 hours worth of groceries.  Some of those groceries went straight out to the rig.  Pheebs was getting noticeably excited thinking we were packing up for another RV trip.  Well, we were loading up for a trip alright but the only ones going anywhere will be Pheebs & I.  And the Winnie Wagon won’t even have to move.  Buggle Buns & I will be tripping in & out of the rig starting Friday afternoon for a week.  Our company arrives Friday afternoon so me & the Pheebers will be out in the rig Friday night groovin:))  Looking forward to that just as I did a couple times last winter.  I sure like my alone time for short periods.  I think every person needs that don’t you…:)) 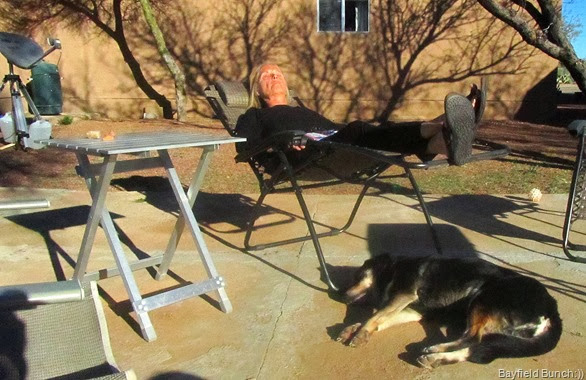 Four o’clock is Happy Hour over at Pat & Mike McFalls most days so we headed ourselves on over there to see how they were doing.  Mike was outside in his best colorful britches pulling up a few weeds here & there.  Always nice to talk to these 2 genuinely nice folks.  Mikes dealing with a few health issues at the moment & it was interesting to hear about the new cutting edge state of the art treatment he is currently going through. 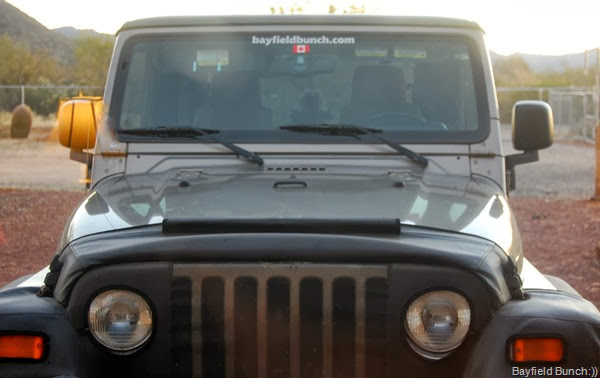 TOOK THE PASSENGER SIDE MIRROR OFF & INSTALLED A NIGHT LIGHT:))

Discouraging news for Sherry & David at IN THE DIRECTION OF OUR DREAMS.  Not the medical test results they were hoping for.  They have already come through so much……………… 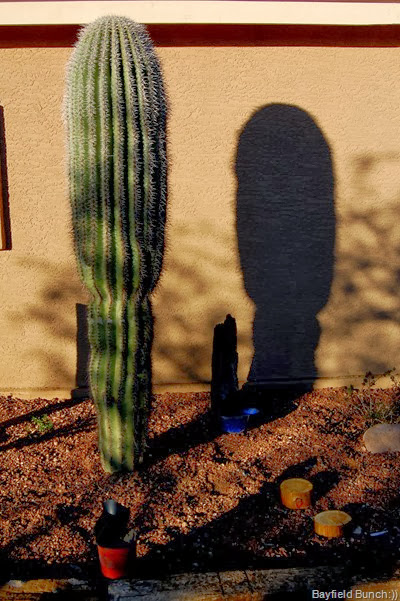 AN EARLY MORNING SAGUARO SHADOW ON OUR HOUSE

GROANER’S CORNER:((   A Sunday school teacher said to her children, 'We have been learning how powerful kings and queens were in Bible times. But, there is a Higher Power. Can anybody tell me what it is?' One child blurted out, 'Aces!'