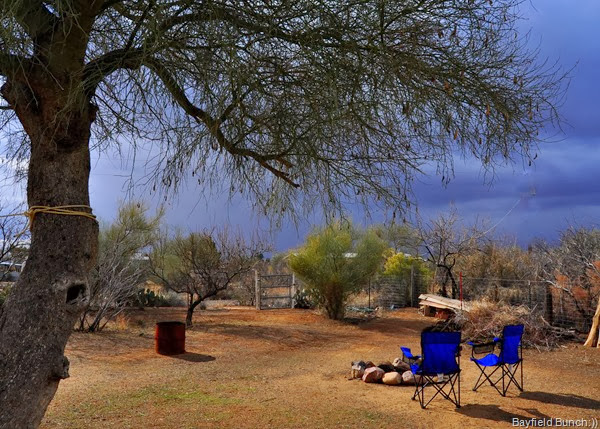 On my desktop I have some weather gadgets & keep an eye on temps for a few places like Yuma, Ajo, Borrego Springs, Quartzsite, Prescott, Congress, Benson, & Bayfield.  Yuma is generally the warmest with Bayfield of course generally being the coldest.  Was surprised to see Congress was the warm spot this morning at 6 a.m. with 54F.  Yuma came in a close second at 49F.  Bayfield Ontario Canada was in a major heat with 42F & that was only 1 degree less than Quartzsite Arizona.  In Ontario we generally call that the January thaw which usually occurs about the 3rd week of January each year.  Should add that I sometimes question the accuracy of these desktop weather gadgets I have……………. 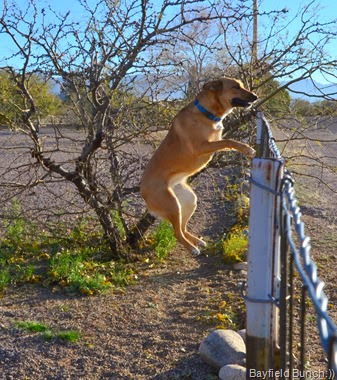 In less than a week we have company coming to stay with us for about 7 days.  Kelly’s Brother Peter & wife Leslie were here last January as well.  They will fly into Las Vegas, spend a few days exploring around that area then drive on down to Congress here.  Pheebs & will move out to the rig again & give Leslie & Peter my big bedroom complete with washroom.  We did that last year when they were here & also when Aunt Jean came out for awhile.  Us guys like hanging out in the rig:)) 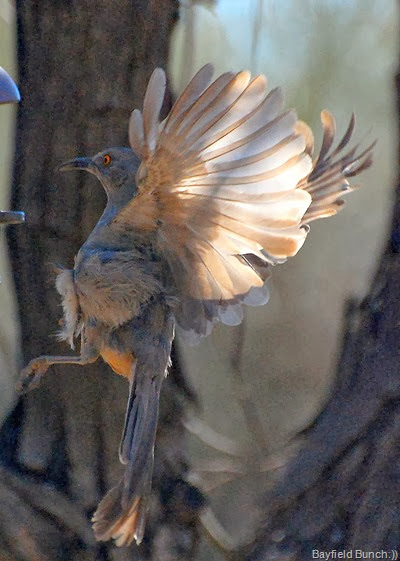 When we bought our Congress house in March of 2012 there was no fence across the front or about half way up our south side.  In effect we had two entrances making a circle driveway.  When we put the new fence in along the south side we effectively closed off the second entrance figuring we wouldn’t need it.  Well, we figured wrong & have been tossing the idea around of putting a second gate in that fence line making it easier not only for our rig but other larger rigs to enter & exit our large driveway area.  Turning to enter or exit our main gate & having to stop & open the gate leaves part of our Jeep or rig hanging on the road.  And when Doug & Dolly pulled in a few days ago with their larger Class C they had to unhook to get back out again.  Well that speeded up our decision on a second gate & today Marteen the fellow who did all our fencing last year dropped by to have a look & give us a price on a second gate.  We agreed on a price & he will be back next week to start on the new number 2 gate. 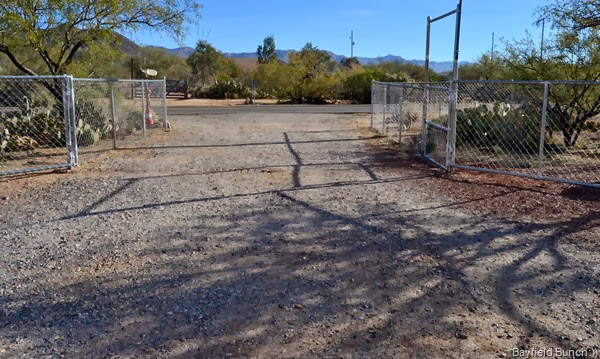 THIS IS OUR MAIN GATE 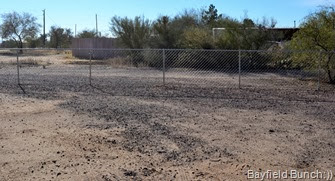 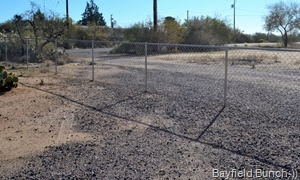 With company coming next week I figured I had better shovel some of the Sonoran desert out of the Jeep & get things all spiffy inside again in case the 4 of us decide on a little desert rumble.  Took out Pheebs wood riding platform plus a whole bunch of other stuff & re-installed the back seat.  Remember last year when we had to borrow Bev & Jim’s rear seat out of their Jeep. 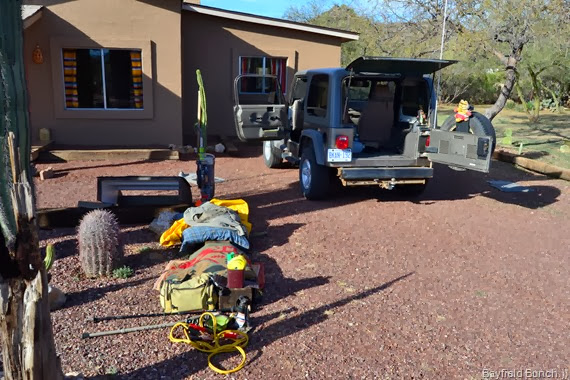 About the time I was cleaning things up this afternoon a little yellow Jeep rolled into our driveway.  Yaaaaaay, it was JANNA & MIKE along with little Emmi. 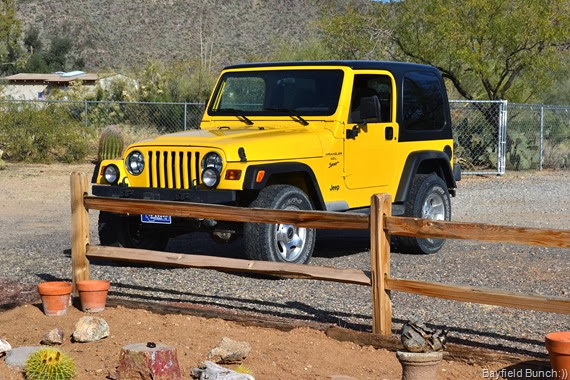 We had us a walk around our property as well as the neighbor’s property I have been cleaning up.  A tour through the house was followed by a chin wag on our sunny warm afternoon patio. 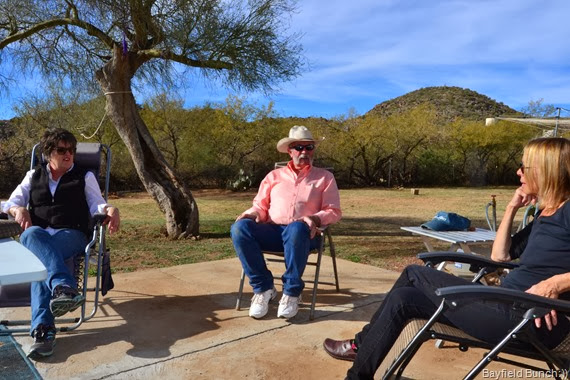 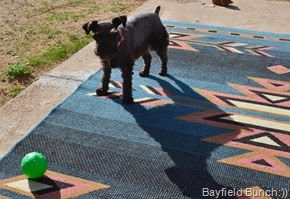 EMMI WANTS TO GET A GAME OF TOYS GOING

We have always had a lot in common with Janna & Mike.  Mike & I were born one day apart, one year apart.  Their future plans are much like ours & we talked about that today.  In fact our talks may have lined up our next Winnie get-away at the end of this month.  We may see Janna & Mike again next week but you never know with we boondocking types when our paths will cross again somewhere.  And I’m thinking it might not be so much as to when, but as to where:)) 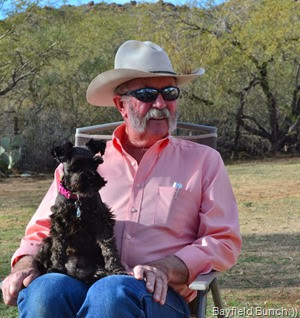 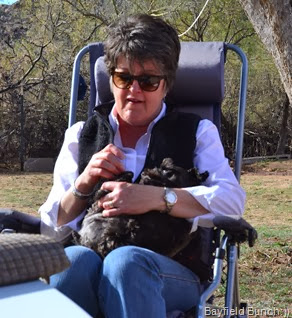 THAT LITTLE EMMI GETS LOTS OF ATTENTION 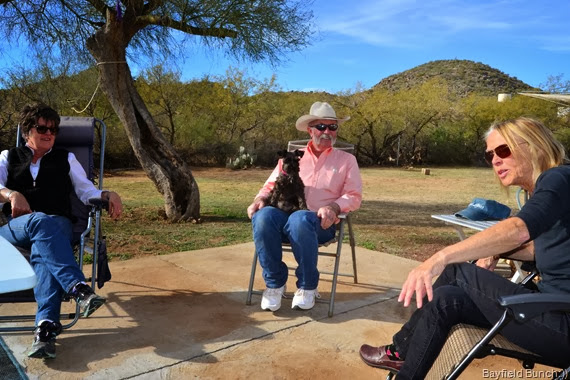 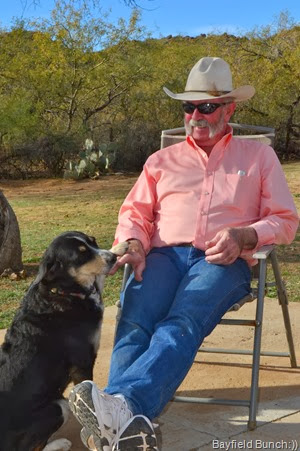 <<< HEY MOM & DAD I LIKE THIS MONTANA COWBOY GUY

Got the Jeeps interior all put back together & stowed away.  No point in wasting valuable energy units washing the Jeep because we’ll probably have it back out in the dusty desert before too long again anyway.  Lots of time for all that washing & waxing stuff when we get back to Canada in the Spring. It will give me something to do instead of grumbling & complaining I don’t got nuthin ta do…………… 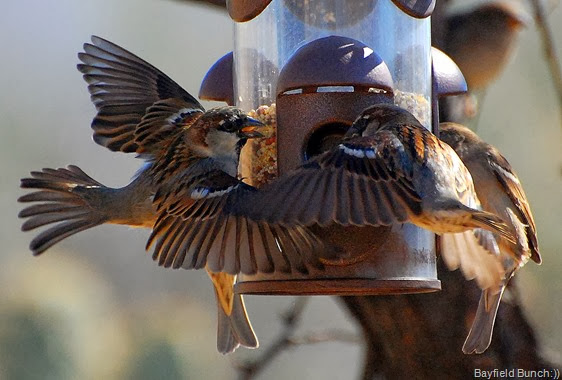 GROANER’S CORNER:((  In Canada's Newfoundland the Newfies have finally solved their own fuel problems. They imported 50 million tons of sand from the Arabs and they are going to drill for their own oil.  Those Newfies are pretty smart eh:))