SURPRISE SURPRISE WE WENT TO SURPRISE, AND TRADER JOES AND 5 GUYS, AND………. 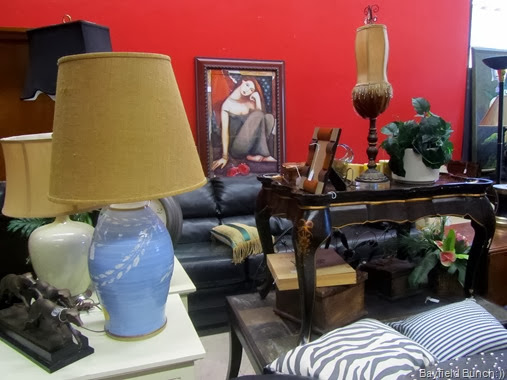 An unusually strong & unsuspected north wind in the night blew our mats off the front porch, knocked an ornament off an outside wall & tipped over a couple campfire chairs.  Kelly had trouble sleeping when one of our aluminum shed doors had a habit of flapping & banging.

OF COURSE PHEEBS SLEPT RIGHT THROUGH ALL THE WIND NOISE
We have had our second hand Mission Recliners for over a year now but despite the chairs solid quality in their day we just came to the conclusion they were not as comfortable as we had hoped they would be.  A bit of internet research, a few phone calls, a consultation with her husband, & Kelly made the decision we needed a furniture change. 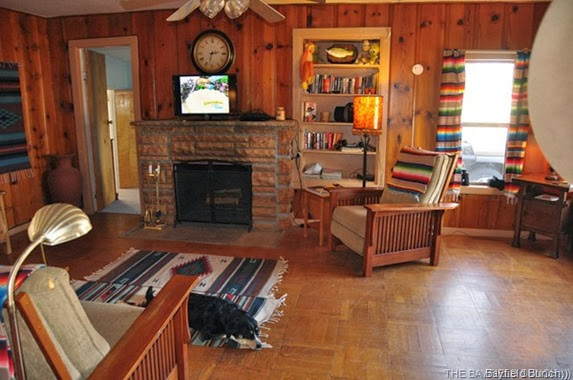 BOTH OUR MISSION RECLINERS CAN BE SEEN IN THIS LAST YEAR PHOTO…PHEEBS TOO:))
She found a neat-o used furniture store in Surprise Arizona called, Design With Cents – High End Resale.  With address in hand & instructions saying it was a block south of Trader Joes we hit the road at 11 a.m. arriving at the store 40 minutes later.  I liked this store right away.  It was jam packed with just the kind of furniture & décor we like.  And it’s all good stuff.  Not junky.  We also found the staff to be on our level & easy to talk to & deal with.  We settled on one recliner, one loveseat, & one painting.  While Kelly did the dealing I went & lost myself behind a sofa somewhere.  I am not a wheeler dealer & do not like all that haggling baloney.  They will deliver our stuff Wednesday afternoon.  And they are taking our 2 Mission Recliners as trade-ins as well.  A good deal all way round. 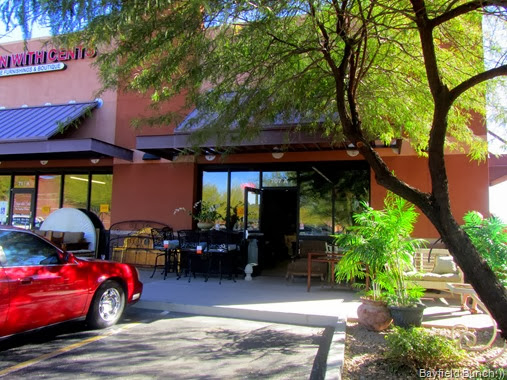 THE ‘DESIGN WITH CENTS’ STORE IN SURPRISE ARIZONA 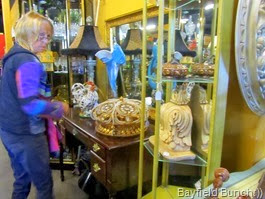 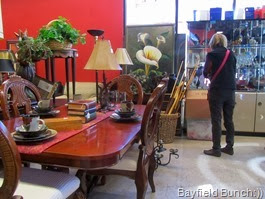 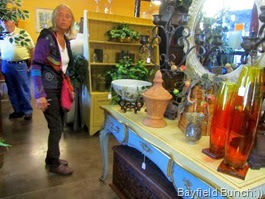 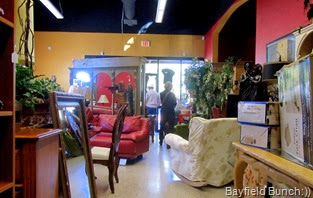 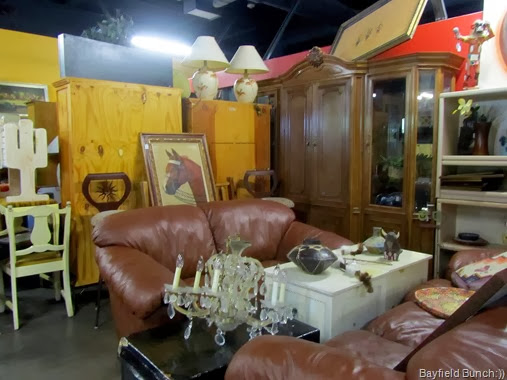 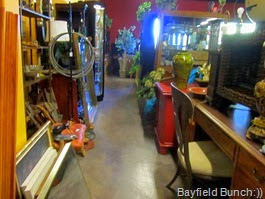 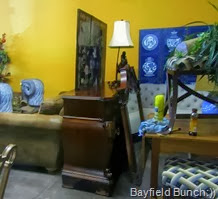 I LIKE THESE KINDS OF STORES FOR THEIR COLORS, DÉCOR, & COZINESS 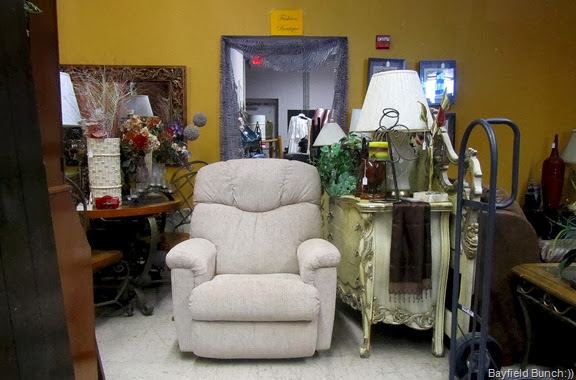 WE WEREN’T CRAZY ABOUT THE LIGHT COLOR OF THIS RECLINER BUT THE PRICE WAS RIGHT & IT WAS COMFORTABLE FOR ME & I’M THE GUY WHO WILL BE SITTING IN IT…WE’LL COVER IT WITH A BIG COLORFUL MEXICAN BLANKET
Having been to Surprise half a dozen times before we were kinda familiar with the huge mega-mall complex in the north end of the city.  Familiar enough to know where 5 GUYS was & we weren’t long getting ourselves over there after leaving the used furniture store.  Burgs & fries were great but I would have liked to get my hands on the volume knob of their music source.  There is no need to blast loud annoying noise like that.  That’s my biggest beef with 5 Guys. 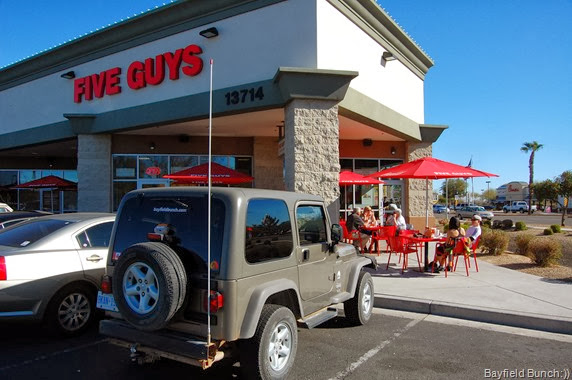 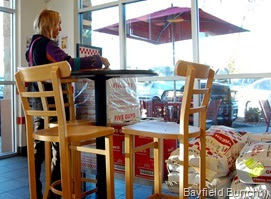 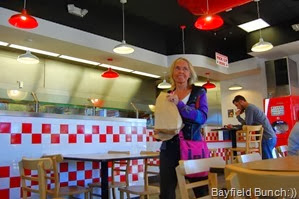 KELLY SCOOPS ALL THE FREE PEANUTS SHE CAN CARRY & THAT’S OUR BURGS IN THE BAG
Around the corner from 5 Guys Kelly remembered a Yogurt place beside Starbucks.  Slipped on over there & got myself about 5 ounces of Carmel Yogurt.  It’s a neat idea they have in that store with Yogurt prices being based on the number of ounces of Yogurt one buys.  At .45 cents an ounce I had a $3 dollar dish of yummy Yogurt.  Kelly slipped next door & grabbed a coffee to go.  Not caring for Starbucks coffee I passed. 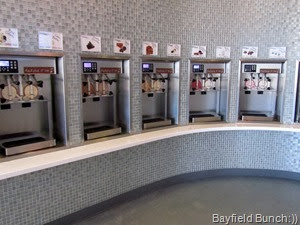 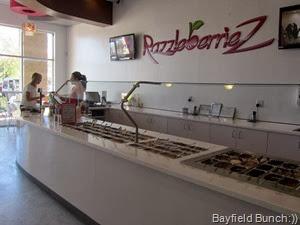 EACH ONE OF THOSE WINDOWS DISPENSES TWO DIFFERENT KINDS OF YOGURT…JUST STEP UP WITH YOUR CONTAINER, PULL A LEVER & PUT AS MUCH YOGURT IN YOUR CUP AS YOU LIKE
Didn’t take us long to find our next stop.  We backtracked up highway 60 to Trader Joes.  Couldn’t help but notice the crushing & congested traffic of course.  You couldn’t pay me enough to live in an area like this.  But back to Trader Joes……  Kelly grabbed a cart because with the blog reader’s list she had in her hand we knew we would definitely be needing a cart to get everything back to the Jeep. 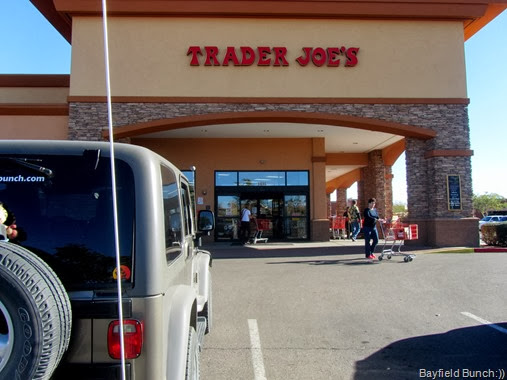 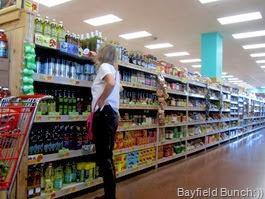 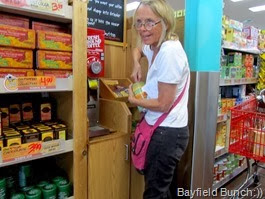 CHECKING OUT JOE’S OLIVE OIL & GRINDING SOME OF JOE’S COFFEE
Now we didn’t get everything on the list of course but we did spend a half hour in the store getting familiar with TJ’s products even stopping clerks with questions.  As you all well know I am not a foody guy but I think our trip to TJ’s today kind of gave me a liking for this place.  Saw a lot of organic stuff, etc.  And we both agreed the prices were reasonable.  And the peanut butter pretzels we bought never even made it out of Trader Joes parking lot before I had them open.  Yep, we will be back to TJ’s alright:))

ROLLING THROUGH WICKENBURG WE NOTICED LOTS OF WESTERN HORSE ACTIVITY 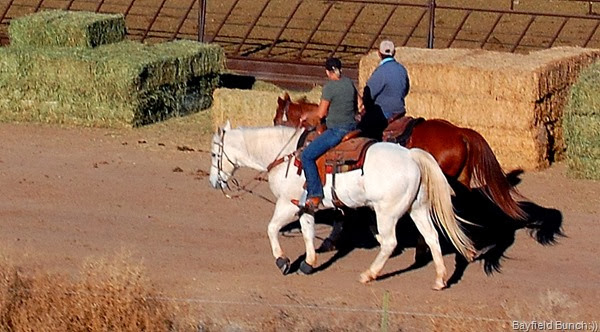 Rolled northbound out of Surprise at 3:15 & we were home by 4.  From Surprise to Congress it is pretty much a straight shot with much of it being a 4 lane highway.  Aside from the traffic it’s a pretty easy drive.  Even Wickenburg’s 2 round-a-bouts are feeling more familiar.

First thing I opened up when we got home was the Cookie Butter.  Didn’t take me long to make a huge dent in that small jar.  Had to fight with myself not to take the Cookie Butter to bed with me & put it under my pillow.  Oh Dear, not the start of another addiction I hope…………….. 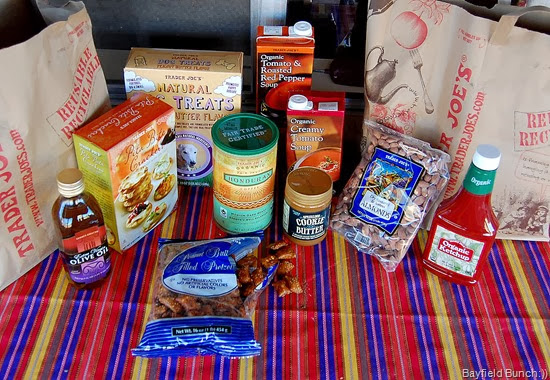 HERE’S A FEW THINGS WE BROUGHT HOME FROM TRADER JOE’S TODAY
When’s the last time you saw a bunch of Alligators together.  From a safe distance I would hope.  Have a look at what these folks over at IN THE DIRECTION OF OUR DREAMS stumbled across out on a hike at MYAKKA RIVER STATE PARK in Florida.  Keep on scrolling down through their photos.  Alligators, Alligators, Alligators!!…….  And have you ever had a nightmare oil change done to your RV?   Why would that oil change take 3 days & end up with your rig on the end of a tow truck?  You can read all about the Hollingers personal oil change nightmare at WHAT AN OIL CHANGE THAT WAS!! 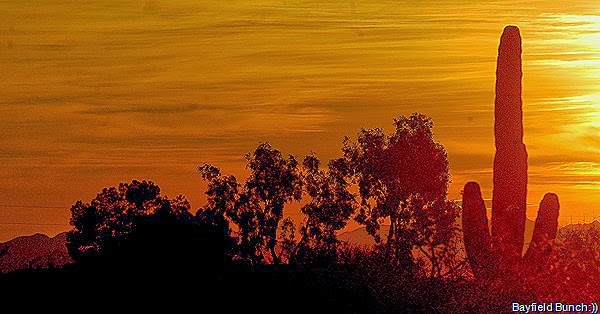 GROANER’S CORNER:((  A young and foolish pilot wanted to sound cool on the aviation frequencies. This was his first time approaching a field during nighttime, and instead of making any official requests to the tower, he said, "Guess who?"
The controller switched the field lights off and replied, "Guess where!"
-------------------------------------------------------------
- Tourists see the world, travelers experience it.
- Home is where your pet is:))
- "If having a soul means being able to feel
love and loyalty and gratitude, then animals
are better off than a lot of humans."
(James Herriot)
- The pessimist complains about the wind; the optimist expects it to change; the realist adjusts the sails -William Arthur Ward
- The only thing better than right now will someday be the memories of right now...AL.
- It is not so much having nothing to do as it is not having the interest to do something....AL.
Posted by Al Bossence at 1/13/2014