The windsock attached to our front gate hung straight down at dawn.  It was so calm a wisp of smoke would have gone straight up into the still morning air without a waver.  Sky was clear & the air crisp, not cold.  Another fine Arizona day was underway & I knew with this calm air it would be a good time to turn our raked up ground based yellow dried grass into burnt-up air based atmosphere.  And so be it the task was done. 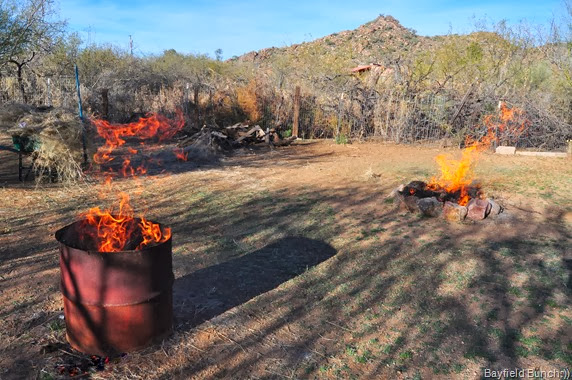 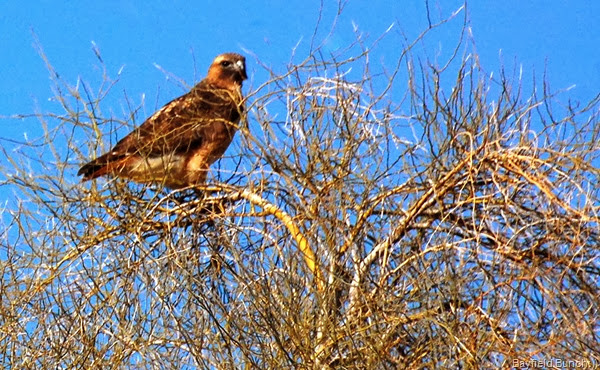 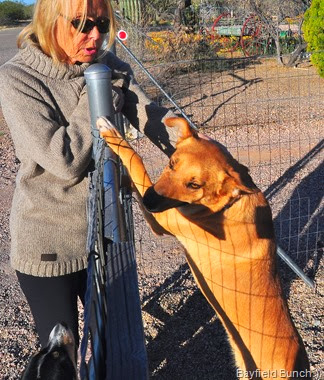 Couple readers asked how Dally was doing & we again noticed this morning she seemed a bit subdued.  Happy to see us but her jumping exuberance has settled down & I think that is a good thing.  I’m sure her experience has changed her in some ways.  Maybe matured her a bit & taken some of that young dog rambunctiousness out her. 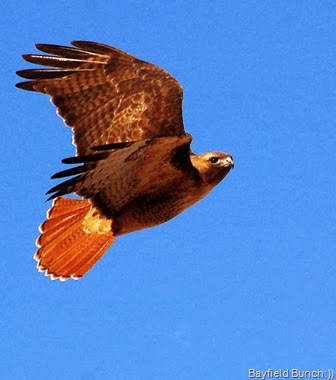 A few folks have asked about that Rattlesnake vaccine shot Pheebs had Tuesday.  The vaccine buys time.  If an animal is bit the vaccine holds back the effects but the animal still must be taken immediately to a Vet for further treatment.  An animal has a higher survival rate & less bad effects if it has been vaccinated against the Rattlesnake’s venom.  Vet said the majority of snake bites are on a dog’s nose & 20% of those bites are dry bites meaning no venom is injected.  Only after effects from the vaccination may be a temporary small lump at the injection sight on her neck after about a week.  Snake aversion classes are also held in Wickenburg but I’m thinking they do not begin until well into March or early April. 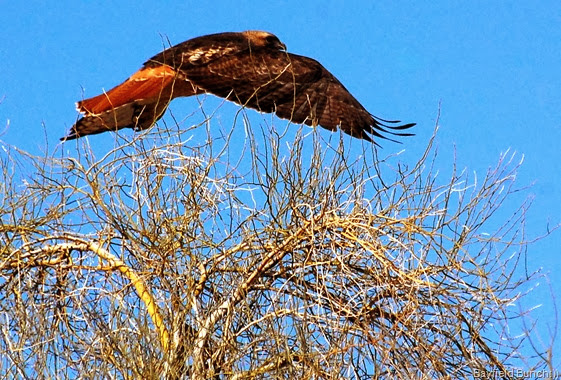 Not a lot to write about.  Tried to interest myself in some yard puttering but ended up in my recliner watching TV for most of the day.  Kelly went to Wickenburg for the results of her Tuesday blood tests & to do some shopping & that’s about it for today…………………..

GROANER’S CORNER:((   Two city boys were on a train heading through Texas when one of them noticed some cows. 'What a lovely bunch of cows.' he remarked. 'Not a bunch, herd,' the other boy replied.  'Heard of what?'  'Herd of cows.'  'Of course I've heard of cows.' ‘No, a cow herd.'  'What do I care what a cow heard.  I have no secrets to keep from a cow.' 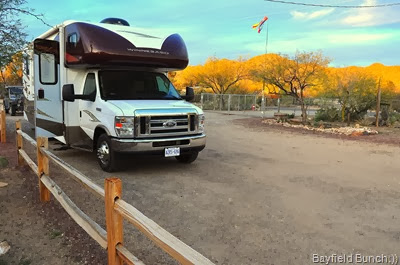 OUR RV IS PARKED IN FRONT OF THE HOUSE TONIGHT…..WHAT COULD THIS MEAN??