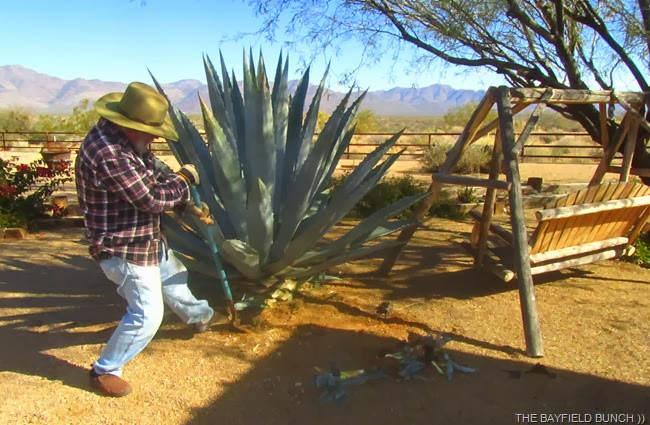 NO I’M NOT DIGGING OUT JOHN & JACKIE’S BIG AGAVE PLANT, ONLY THE DOZEN OR SO SMALL OFF-SHOOT PLANTS AROUND IT

Neither Kelly or I function well in cold weather anymore.  I think these last bunch of years surrounded by a warmer climate have really spoiled us.  Not a substantially warmer winter climate we are in but for sure a lot warmer than our Canadian winter climate for the most part.  Woke up to 32F this morning & when I checked Bayfield Ontario’s weather I see it was 54F.  Something very wrong with this picture.  There is one advantage to colder northern weather though & especially for folks who are not outdoors people.  Houses are built with warm insulation factors & windows are double paned.  But here’s the big difference between northern homes & southern homes, especially older Cowboy houses like ours.  Houses in the north have……FURNACES!!  Warm loving heat piped to each & every room.  Ohhhhh how I miss that cozy feeling…………. 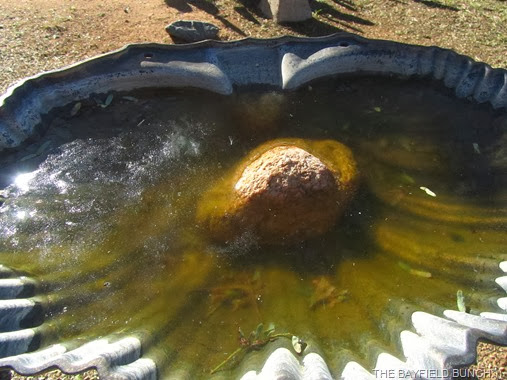 We held off our morning walk until the sun was well up off the horizon.  And as usual we started our walk all bundled up against the cold & finished our walk half an hour later all un-bundled & sweating.  Gotta love this crazy desert weather. 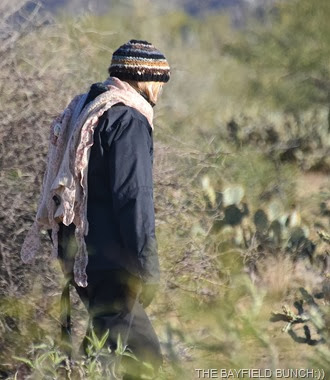 <<< BUNDLED UP AGAINST THE MORNING’S COLD

Picked up 2 more utility trailer loads of dirt today & that completes my one front Cactus bed.  Going to keep bringing dirt back until the pile at Corky’s in North Ranch is depleted.  The pile of dirt put there before he bought the house caused an irrigation problem & that is why he wants to be rid of it all.  Also plans to park his Class A where the dirt pile is now & would like the dirt gone by the end of the month.  Figure another dozen or so dirt loads might do it & I’ll stock pile the dirt here.  Every home owner needs himself a good pile of dirt I figure.  Also stopped at Sarge’s today & dug up about a dozen small Agave plants he needed removed.  I will plant them all here at home in the morning.  John (Sarge) & Jackie weren’t home so they might not even notice the Agave plants missing:))

KELLY CHECKS OUT THE AGAVE PLANT AT JOHN & JACKIES 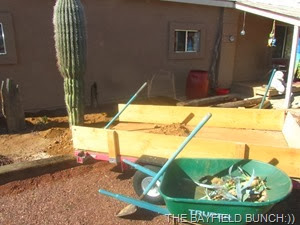 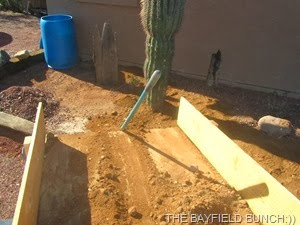 House sure smelled good today with Tuesdays bargain Turkey in the oven.  Helped to warm up the house too.    Don’t know if we got over 50F today but no matter, it was nice working outside without sweating. 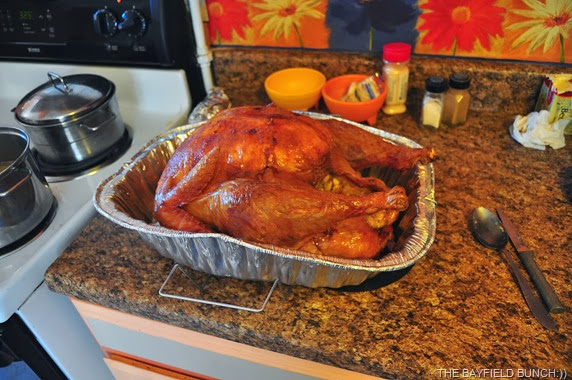 HAD OURSELVES A GREAT TURKEY SUPPER WITH ALL THE FIXINS:)) 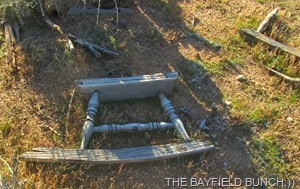 More helpful RV tips over at WHEELING IT again so hop over & see what Nina has posted for their top 5 Christmas Wish List items this year.  This is always a good blog to follow folks, generally lots of helpful RV info to be had here. 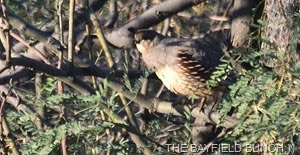 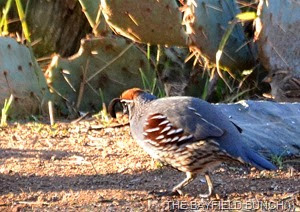 “As I stood there naked and opening the door to the shower”.  Following those words Judy over at TRAVELS WITH EMMA goes on to explain what happened next.  We RV’ers have all done similar things & for any Newbies out here you had better read Judy’s post twice.  And maybe take some notes:)) 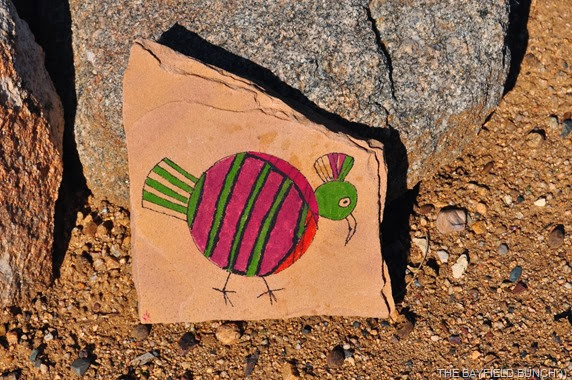 Chinle at SPOTTED DOG RANCH has been doing a little flirting lately but not the kind of flirting we usually associate with flirting.  No indeed, in Chinle’s own words she has been flirting with disaster.  And then something happened…….  Drop on over & she’ll tell you all about it. 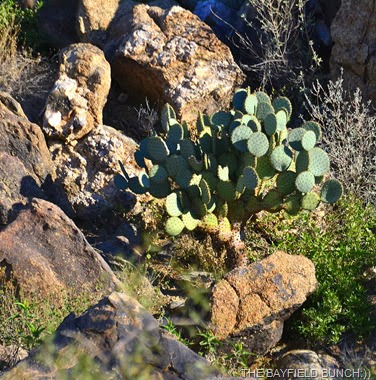 And some changes to a popular RV boondocking site just west of Casa Grande Arizona.  Kelly & I have overnighted here several times over the years.  You can read about those changes at the Jim Kortsen West Pinal County Park  on FRUGAL-RV-TRAVEL.COM. 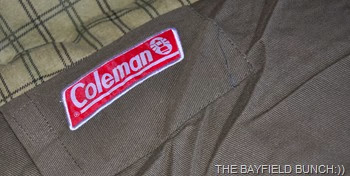 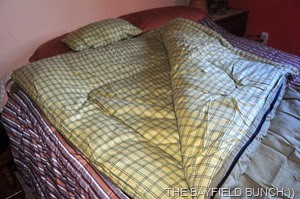 Anyone who has or has had a Class C RV with an over the cab bunk knows the difficulties that can go along with a bed in that location.  One of the biggies is trying to make the bed up there while standing on a short steel ladder.  Frustrating comes to mind & one of those things I do not have a lot of patience with.  I was reminded of those bed making difficulties while in Borrego Springs last week.  And twice I had the top comforter slip off the bed during the night & slip over the edge to the floor below.  Needed a solution for that problem & today UPS dropped off that solution.  Kelly ordered me up a brand spanking new Coleman sleeping bag & I like it.  And I like it because it is not made of slippery nylon, has a patented no stick zipper, lots of room inside, & is rated to 5 degrees below zero.  Like the color as well.  And best of all…..no more precariously balanced on a ladder trying to make a bed with sheets, blankets, & comforters.  Bonus. 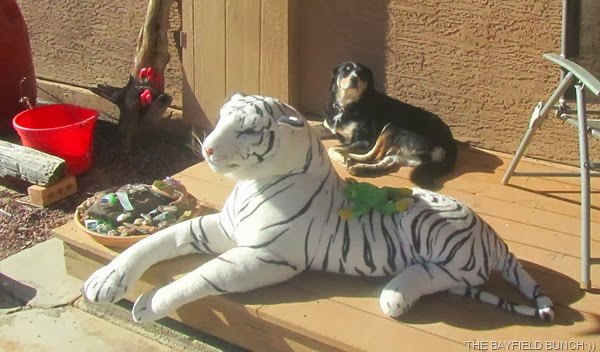 GROANER’S CORNER:((  Canadian/American or should that be American/Canadian………..

This is something deeper than spelling or pronunciation. It goes to the heart of the less-assertive Canadian character. The United States was born when Americans revolted against King George III and asserted their independence. Canada never came to a similar point of self-assertion and that little word "eh?" is their refusal even to assert that it's a hot day without inviting somebody else to verify it.
One definition of a Canadian is "a North American who refuses to join the revolution".
Another way to tell the difference between a Canadian and an American is to invite the suspected Canuck to lunch and watch him eat. If he's really upper crust, he'll eat like an Englishman, with knife and fork held firmly in his right and left hands. He'll cut with his knife, pack the results on the back of his fork and convey the food to his mouth with the fork still in this left hand.
Many an American eats with knife and fork, too, but in a different way. He takes the knife in his right hand and the fork in his left to cut up the food. Then he puts the knife down and takes the fork in the right hand to convey the food to his mouth.
A common garden-variety Canadian does the job differently. He doesn't use his knife at all, except for particularly stubborn steaks and other such tough foods. Instead he takes the fork in his right hand and leaves the knife beside his plate. Then he cuts the food with the edge of the fork and feeds himself with the fork held in the same hand.
But suppose all these tests are inconclusive. There's one more, rather dangerous, way to tell a Canadian from an American. Just remark to the suspect that Canadians and Americans are so much alike that it's hard to tell one from the other. If the person involved is an American, he'll probably agree.
But if he's a Canadian he'll let you know, in no uncertain terms, that you're wrong. And that stubborn sense of difference is one main reason why the two countries, despite similarities, remain separate.