CHRISTMAS EVE SOMEWHERE IN THE KOFA MOUNTAINS & GUESS WHO WE COINCIDENTALLY MET HERE……..:)) 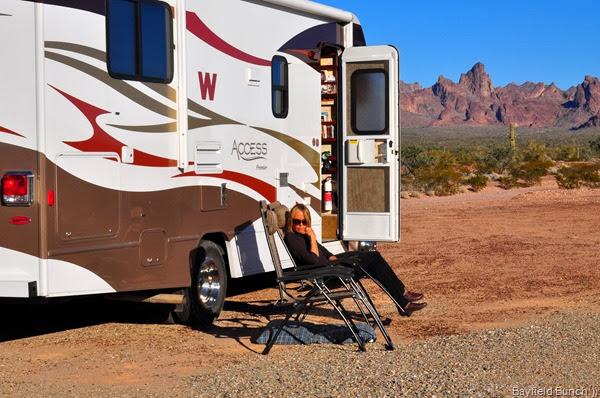 Well wouldn’t ya know it.  After checking temperatures for warmer destinations early this morning we find out that Congress is warmer than the half dozen other areas we were hoping to head for.  Did that mean we would stay right where we are?  No way Jose…….we were in travel mode:)) <<< SPOTTED THIS RED TAIL HAWK ON OUR WALK THIS MORNING

Had ourselves a relaxing ‘getting ready’ morning.  Tossed the final few things in the rig, hooked on the Jeep, & about 10:55 we rolled out the driveway.  Picked up a bit of gas in Congress & swung Winnie’s nose westward on highway 71.  Had we traveled in a southerly direction we would have been heading for Ajo & Darby Well road but finally made up my mind getting gas we would head for the KOFA NATIONAL WILDLIFE REFUGE south of Quartzsite Arizona.  It’s an area we spent some time in 3 or 4 years ago.  Have always loved the Kofa Mountains ever since first coming to Quartzsite back in January of 07. 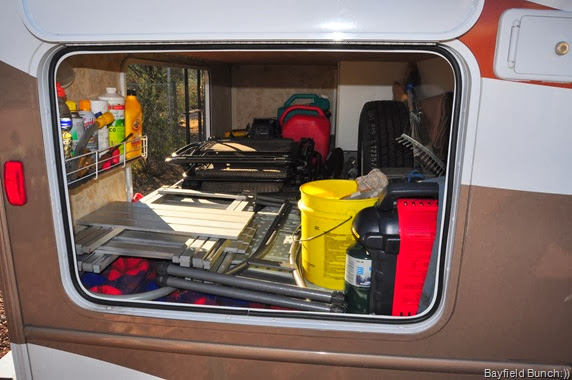 Love the quiet drive from Congress to I-10 just a few miles east of the Q.  The road just rolls across the desert floor with hardly any traffic on it at all.  Rumbled into Quartzsite about 12:45 & made our first stop McDonalds.  Say what you will about McDonalds but I had a hankerin for a burg, some fries, & a coffee that beats Charbucks anyday.  Last time in Quartzsite was on our way home from Borrego Springs about a month ago & we noticed today activity is really picking up in the Q.  Dealers have already stocked up their lots with RV’s of all descriptions for sale.  Vendors tents are up & in the process of going up.  Quartzsite is once again readying itself for the month of January.  Largest annual gathering of RV’s in the world.

Our second stop in the Q was at K&B’s for a couple more LED lights.  From there it was over to another vendor suggested by K&B for a $9 Rodent Deterrent.  Will explain & have a picture in tomorrow’s post about that gizmo.

HERE COMES KELLY OUT OF K&B’S WITH OUR L.E.D. LIGHTS

We marveled at the warmer weather as we headed south out of the Q.  What a great feeling it was once again to be back on the road & heading off somewhere.  The Kofa mountains have always been on my favorites mountain list.  It’s the jagged & ragged peaks that I have always admired.  We knew of several roads heading off the highway into the desert towards the mountains & at first planned on returning to the area & the spot we were before.  But a last minute decision (& we have lots of those) took us down a different road albeit a road we had also traveled one other time.  Road was a bit wash-boardy so had to take it slow.

We pulled off the road onto a wide flat area & stopped.  Got out & were just in the process of deciding about staying there for the night when heard & saw a white trailer coming along the road behind us.  I said to Kelly “oh no, I bet that rig will pull right in here beside us”.  And it did!! 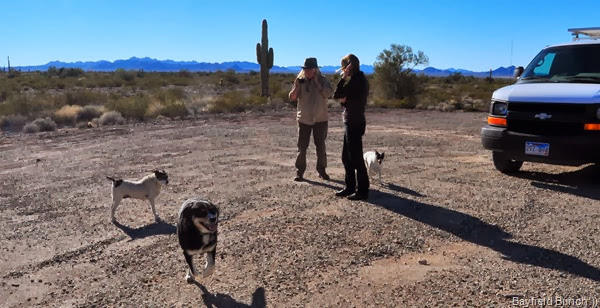 Well we have all had our share of coincidences over the years & the term ‘it’s a small world’ often applies to RV folks & it sure applied to us today as well as the driver of the white van pulling the white casita trailer.  She recognized our rig & we recognized her as soon as she pulled in behind us.  Well Holy Smokes it was none other than RV SUE & HER CANINE CREW.  She had slipped over from Ogilbe Road west of Yuma to visit friends Ann & Bill for Christmas.  Ann & Bill are volunteers here at the Kofa Refuge.  You can imagine how surprised we were to see Sue.  What a huge coincidence.  What were the odds of being in the same part of the desert on the same road at the same time of day.  Of course Spike & Bridget are Pals of Pheebs so it was like old home week with all the wagging tails, smells, & smooches.  How great to see Sue again.  Been about a year since we last saw her boondocking just south of North Ranch near Congress.  Course we did spot her rig near Dome Rock west of Quartzsite from I-10 about a month ago on our way to Borrego Springs. 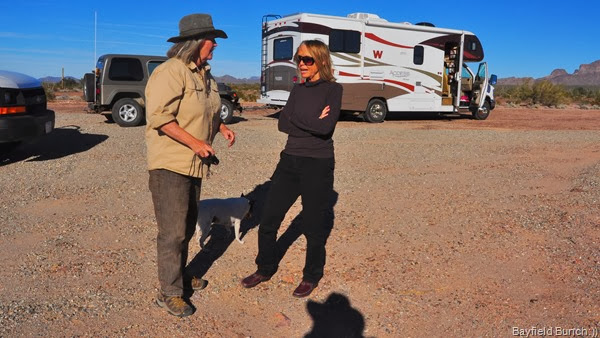 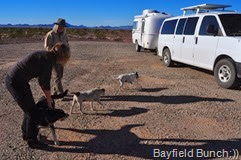 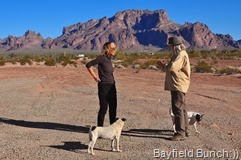 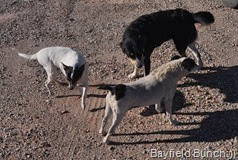 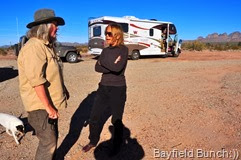 Sue & the crew motored on up the road a short distance to Ann & Bills travel trailer.  It’s the only one out here besides us & we can their trailer from where we are.  I think Sue plans on staying in the area for a few days so we will probably see her again.  We can see her rig parked about a quarter mile north of us in a copse of trees.  You know how we boondockers have the greatest respect for each others privacy.  We’re kind of a funny bunch that way & it’s not something easily understood by most folks who like to gather together & socialize in RV Parks. 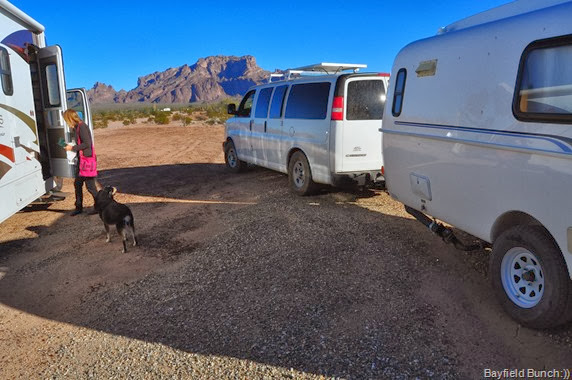 SUE, SPIKE, & BRIDGET, HEAD FOR ANN & BILL’S TRAILER WHICH IS THAT WHITE DOT UP THE ROAD 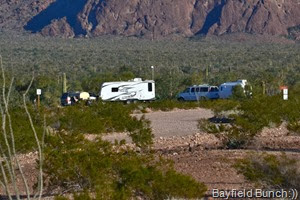 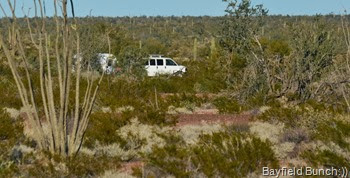 Sue’s friends Ann & Bill dropped by to say Hello later & give us some helpful info about the area plus a map.  We had thought of moving a little further south but after talking with them I think we’ll scout out a better campsite in the morning & stay right here in this area.  Lots of Jeep roads & things to see.  They gave us a good lead on a cave that looks like a skull.  Good time to be here too because Palm Canyon is a popular scenic destination for folks & right now there’s nobody here.  Bonus:))  We hiked Palm Canyon a few years ago.  Bill & Ann by the way have been helping with the re-location of PRONGHORNS.  The sedated Pronghorns are flown from the Ajo Arizona area here by helicopter.  Bill & Ann help off load them to a recovery area.  We first met Ann & Bill over on Darby Well road west of Ajo a couple years ago. 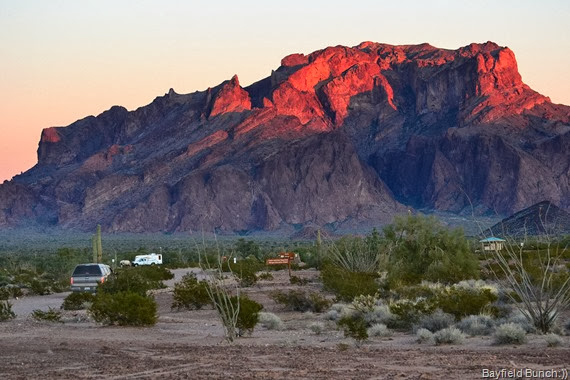 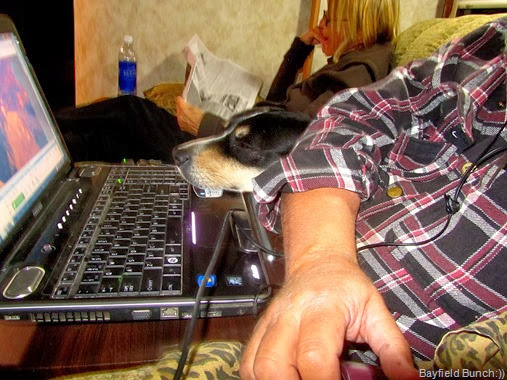 MY WRITING SOMETIMES EVEN PUTS PHEEBS TO SLEEP 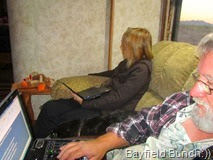 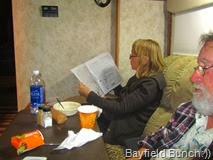 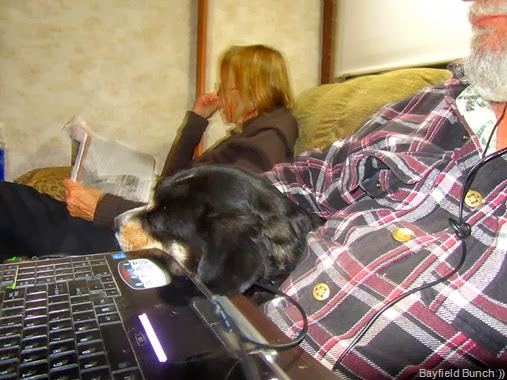 YEP, WE SURE ARE COZY IN HERE ALRIGHT

So anyway, that’s where we are tonight very happily & nicely nestled into the 655, 400 acres of the Kofa Wildlife Refuge somewhere between Quartzite & Yuma Arizona.   And it was Christmas Eve 9 years ago tonight when Kelly & I sitting on a rocky ridge in BIG BEND NATIONAL PARK Texas watching the sun go down decided we did not want to ever have to spend another Christmas at home in Ontario Canada.  With the exception of 05 we have spent all our Christmas’s stress free going where WE want to go & doing what WE want to do………..Merry Christmas everybody & thanks for all the great wishes:)) 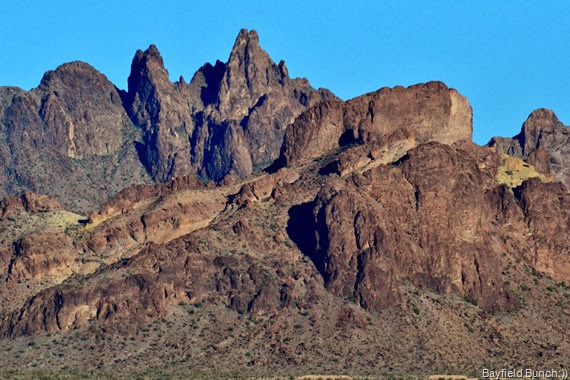 CAN YOU SEE THE GIANT KOFA ROCK SNAKE??  BODY STRETCHES UP FROM LOWER LEFT & THE SNAKES HEAD & EYE ARE JUST ABOVE & TO THE RIGHT OF CENTER…SNAKE IS LOOKING UP TOWARD THE TOP RIGHT HAND CORNER…THE SNAKES EYE IS PROMINENT

And before I forget, a guest in our Shout Box asked, “Did you ever find out what was making the noise in the attic of the house”?  Answer to that question is ‘no’.  After Kelly banged on the ceiling with a broom handle all has been quiet.  Not a creature is stirring not even a mouse. 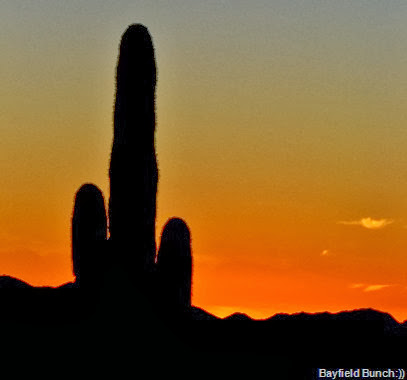 <<< SUNSET OVER THE TRIGO MOUNTAINS TONIGHT

Q: What did Mary Poppins want from Santa?
A: Supercalifragilisticexpialisnowshoes!

Q. Where does a snowman keep his money?
A. In a snow bank.

Q. What do you call Santa when he stops moving?
A. Santa Pause!

Why was Santa's little helper depressed?
Because he had low elf esteem.

What do you call people who are afraid of Santa Claus?
Claustrophobic.

An honest politician, a kind lawyer and Santa Claus were talking when they all noticed a $5 bill on the floor. Who picked it up?  Santa of course, the other two don't exist!