WE DEFINITELY CAUGHT US A CRITTER IN THE NIGHT 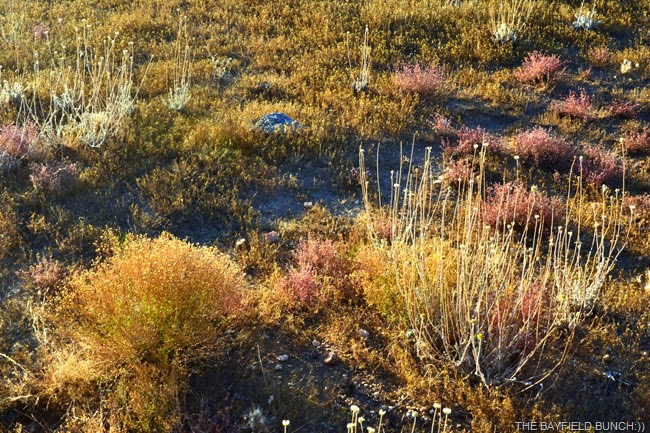 NO LACK OF PASTEL COLORS ON THE DESERT FLOOR

Probably the first first words out of Kelly this morning were something like, “we got a Skunk”.  And sure enough as I shined the flashlight out through the kitchen window there it was in the small cage.  Definitely a Skunk.  I slipped carefully out the back door & retrieved the Critter Cam.  As expected, there were about 40 pictures.  Every time the Skunk had moved the Cam took a photo.  First few pics showed the Skunk circling the cage & then presto….he was in the cage. 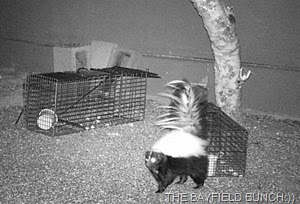 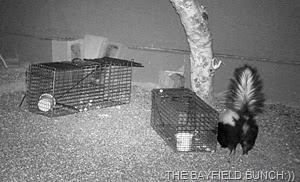 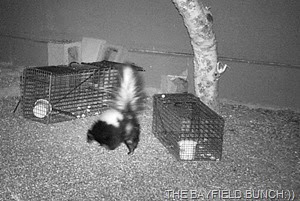 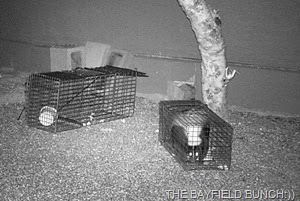 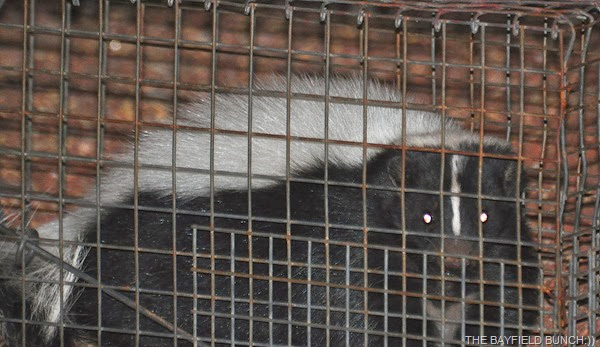 I was going to just delete all the following Critter Cam photos figuring they would all be the same with slight movements between each one.  But whoaaaa, what’s this!!  Scrolling quickly through the the thumbnails something caught my eye & I backed up.  Two frames showed a second Skunk in the other cage.  But then all the following frames showed the cage empty again.  A second Skunk had got away.  (Oooops, forgot to change the font color) 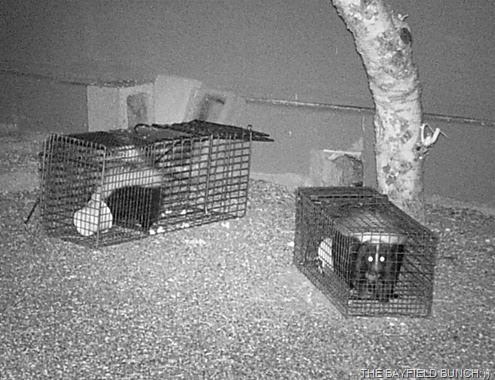 OH NO……….TWO SKUNKS BUT THE ONE ON THE LEFT GOT AWAY

Kelly phoned Les right away & minutes later he rolled in our driveway.  He had been close by just heading out of Congress.  I was in the shower when he showed up so didn’t get any photos of Les putting a blanket over the Skunk cage & carrying it out to his trailer.  Said he had a place where he lets them go.  He figured he had the one cage set to tight & that’s why it didn’t trigger.  Adjusted it & set it up again to see if we can catch the second Skunk tonight. 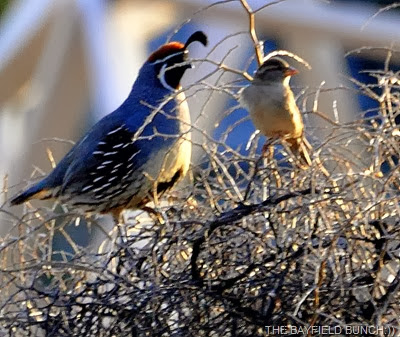 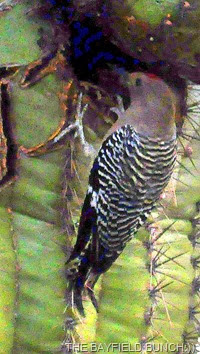 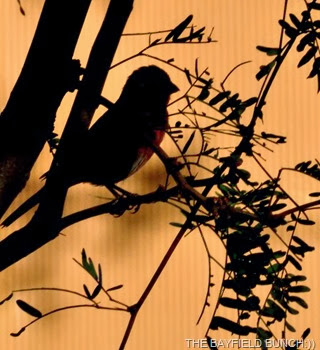 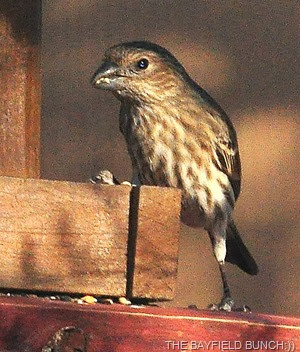 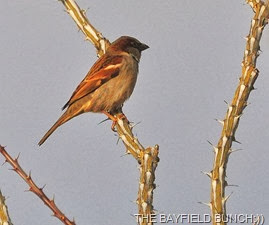 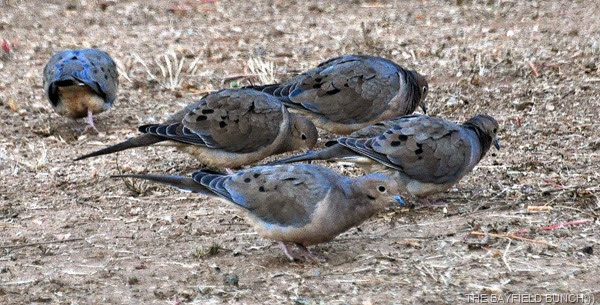 Finished up my railway tie project this morning so I’m glad that’s done.  Surprisingly enough I didn’t wake up this morning with any aches & pains from Tuesdays project.  Thought for sure I would have a sore something somewhere.  But nope, despite my legs being stiff I was good to go. 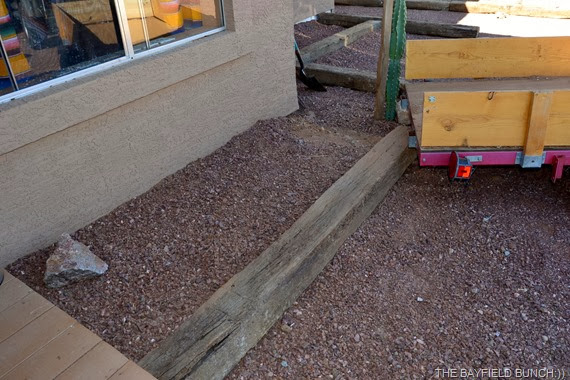 USED TODAY’S FREE DIRT TO RAISE THIS ‘UNDER THE WINDOW’ FLOWER BED ABOUT 4 INCHES & RE-TOPPED IT WITH STONES…FREE DIRT??

Kelly stopped at North Ranch a couple days ago on her way back from Wickenburg & checked their bulletin board.  She’s always checking bulletin boards for things on sale.  Noticed somebody in North Ranch had a bunch of fill (dirt) to get rid of….free.  Well you know where we were this morning with the Jeep & trailer.  Yep, we got us a load of free dirt.  I will probably go over in the morning myself & get another load or two.  Sure is great having a good little utility trailer.  I’m using the dirt to raise some flower beds close to the house.  Don’t know what we will plant in them yet but I’m sure we’ll think of something. 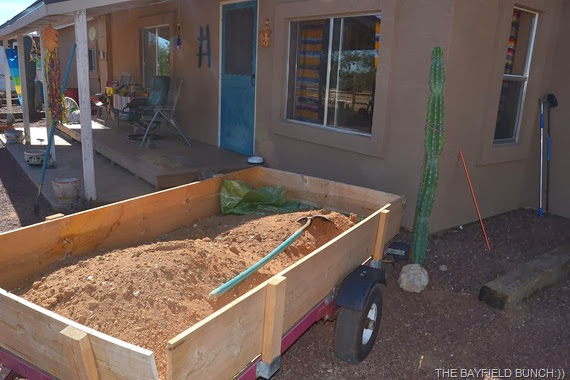 John & Jackie dropped around in their new Ford Escape.  Only got 250 miles on it so far.  Bought it last week in Wickenburg.  Nice little car.  Seems our last two visitors both had brand spanking new vehicles.  Does this mean the economy is on the mend………………….. 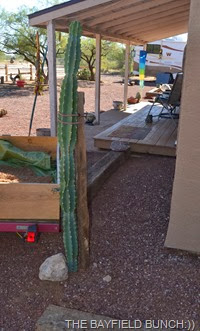 KAMPER KATS is the latest person to join the Bayfield Bunch on their Snow Bird south-westerly adventures whether they be on the road or at the house.  Thanks for stopping by KK:)) 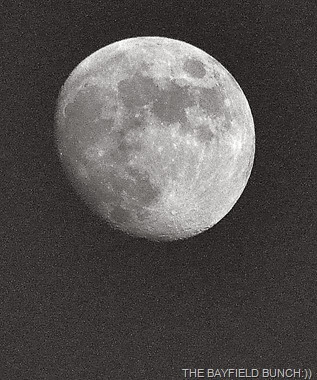 Q: Did you hear about the great new restaurant on the moon?
A: The food is excellent, but there's no atmosphere.
Q: Why did the cow jump over the moon?
A: Because the farmer had cold hands!
Q: Did you hear about the bones they found on the moon?
A: It seems like the cow did not make it.
Q: What holds the moon up?
A: Moonbeams.
Q: How do you know when the moon is going broke?
A: When it's down to its last quarter.
Q: What do you call a clock on the moon?
A: A lunartick.
Q: How does a man on a moon get his haircut?
A: Eclipse it.
Q: What do you get when you take green cheese and divide its circumference by its diameter?
A: Moon pi.
Q: How does one astronaut on the moon tell another astronaut that he is sorry?
A: He Apollo-gises.
Q: What was the name of the first satellite to orbit the Earth?
A: The moon.
Q: What do moon people do when they get married?
A: They go off on their honeyearth!
Q: When is the moon not hungry?
A: When it is full!
-------------------------------------------------------------
- Tourists see the world, travelers experience it.
- Home is where your pet is:))
- "If having a soul means being able to feel
love and loyalty and gratitude, then animals
are better off than a lot of humans."
(James Herriot)
- The pessimist complains about the wind; the optimist expects it to change; the realist adjusts the sails -William Arthur Ward
- The only thing better than right now will someday be the memories of right now...AL.
- It is not so much having nothing to do as it is not having the interest to do something....AL.