WE ARE IN SLAB CITY CALIFORNIA:))

We just turned left in Niland & followed the big yellow Moon all the way back through the darkened desert scrub to Slab City.  This is our third time here so we knew exactly what to expect & exactly where to go.  No street lights in the Slabs.  In fact, no electricity at all for the Slabbers.  Lots of solar garden lights scattered about.  Quite a few folks on solar power here so lights are at a minimum.  A few generators going throwing out some tungsten power into the night.  It was 7:15 p.m. when we quietly rolled in & all is quiet.  We are parked right in front on the Christian Reformed Church just a stone’s throw from Solar Mikes.  This Church building might just be one of the ‘only real buildings’ in all of Slab City 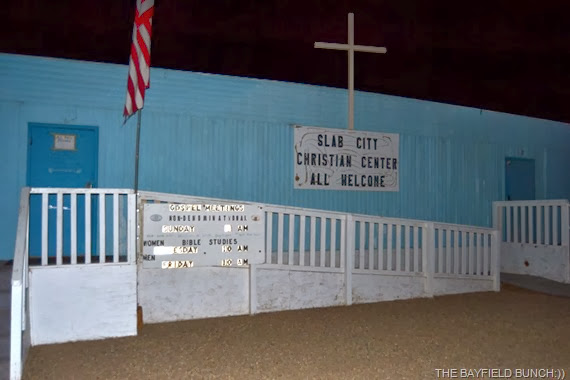 Our morning started out normal enough as we calmly worked away at tying up loose ends prior to travel.  It was when I checked the rigs tire pressures that our day quickly unraveled.  Tapping the tires with a rubber mallet I noticed the outside dually on the drivers side back had a thud sound to it.  Not good.  Same new spare Michelin tire we had put on in New Mexico less than a month ago when we had a blow out.  A quick check with the tire gauge told me the tire was down about 30 pounds.  Still enough air in it to run the rig into the Congress garage less than a mile away.  We left it there & went back home.  Garage fellow could not find any leaks so just aired the tire up about an hour later.  Finished loading up a few last things & we were on the road at 1:10 p.m.  A full 2 hours later than I thought we would be.

ON THAT OVERPASS AHEAD TURN LEFT TO WICKENBURG, RIGHT TO KINGMAN ARIZONA, OR STRAIGHT THROUGH FOR LOS ANGELES 333 MILES AHEAD

The highway from Congress to I-10 east of Quartzite is a nice quiet scenic 2 lane road running fairly straight across the desert floor.  Not a lot of traffic & the traffic we did meet were mostly fellow RV’ers heading the other way.  I-10 heading into the Q was, well…..just I-10.  Figured we had better fuel up in Arizona before we crossed into California’s high gas prices.  We pulled into the same Love’s Truck Stop & right up to the very same pump where our credit card was compromised last winter.  Figured maybe lightning wouldn’t hit the same gas pump twice.  Just up the road from the gas bar is the RV Lifestyle place.  Kinda like Camping World.  We were after some LED lights.  They didn’t have the ones we needed so we headed back down the service road into Quartzsite.  Kelly remembered K&B’s.  K&B’s has everything & of course had the lights we needed.  We got 4 of them.  That stop took about 40 minutes out of our day & I knew we didn’t have much time to reach the Slabs before nightfall.  It was just a few minutes after 4 when we headed west out of Quartzsite. 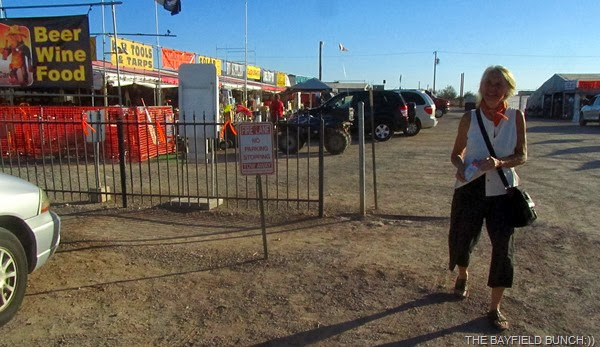 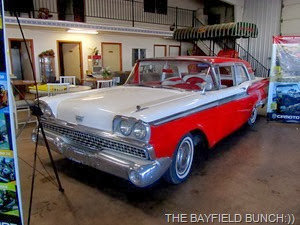 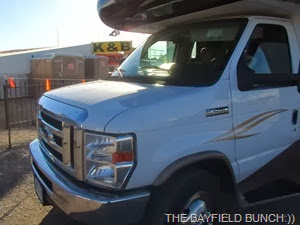 I knew RV SUE & HER CANINE CREW were in the Dome Rock area so I kept watching for here rig.  Not a lot of people in that neck of the woods yet & sure enough I spotted her from the Interstate.  She was configured in an East-West set-up.  Her van facing West & her Casita facing East.  I fired off half a dozen shots (photos) in her direction & blew our horn.  Not that the horn sound would ever reach her.  She was probably three quarters of a mile or more away.  We didn’t stop because we were in a race with the setting sun.  By the time we reached Desert Center the sun was winning the race & slipping down behind the mountains.  I knew then it would be a night time arrival at the Slabs. 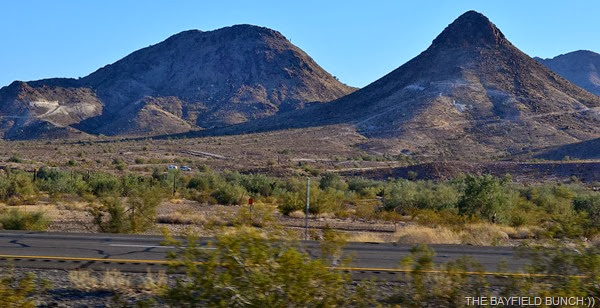 HERE’S A CROPPED VERSION OF THAT SAME PHOTO…7 MINUTES AFTER 4:)) 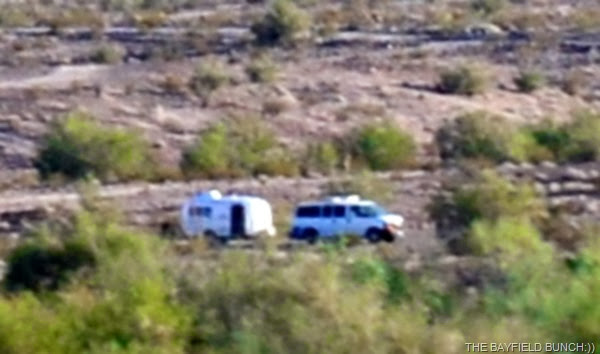 We swung off I-10 at 29 Palms Road.  Had we turned right at the exit ramp stop sign we would have gone right on up into Joshua Tree National Park.  Our destination was Niland in the opposite direction so we crossed back over top I-10 & picked up Box Canyon Road.  Light was fading fast but we could still see the high mud cliffs on either side of the road we were winding our way through.  This was the third time using this route but all 3 times before we had been coming the other way.  From I-10 all the way to a little town called Mecca we only passed one car going the other way.  Now that’s my kinda road.  We got scrambled up in Mecca.

CROSSING OVER I-10 LOOKING EAST

We didn’t know the way through Mecca to pick up the road heading south on the east side of the Salton Sea so we had Garmin Gertie our GPS system leading the way.  Gertie got a little confused somewhere in Mecca & we had to pull over & ask for directions.  Minutes later we were southbound on highway 111.  Had never traveled this section of road before & was hoping to do it in the daylight & enjoy the scenery.  But it wasn’t to be.  Instead we enjoyed the flickering lights of Salton City on the westerly side of the Salton Sea.  I don’t mind driving at night at all & have always enjoyed seeing the lights of towns & cities.  Tonight was no exception as Salton City’s lights shimmered off the placid waters of the Salton Sea on our right.  And to our left we watched the biggest cheesy colored Moon slowly rise over a distant mountain range.  A very peaceful feeling came over me as we headed south through the moonlit night. 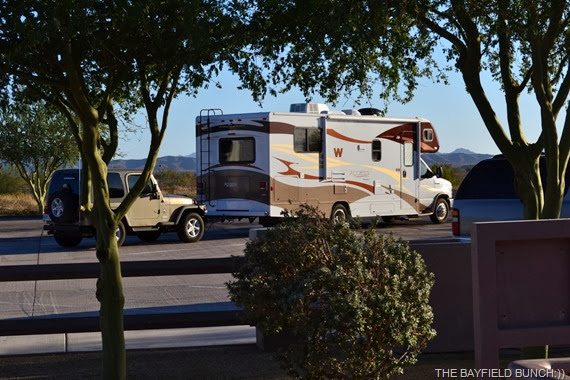 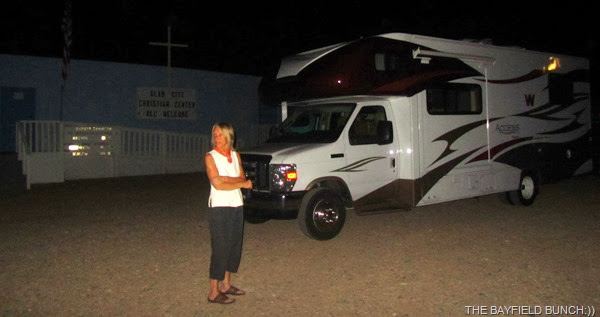 OUR SPOT FOR THE NIGHT IN SLAB CITY:))

There really isn’t any signs or anything to tell someone where Slab City is but we already new where to turn.  I remember one Saturday morning a couple years ago parked along the very street we were on watching a parade go by.  I love old RVing memories like that & tonight’s Moonlit arrival in Slab City will be another one. 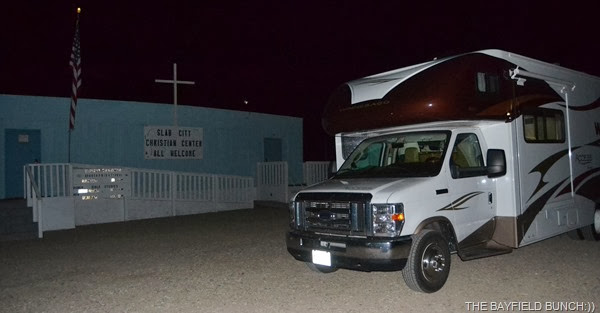 We’ll be up bright & early in the morning & over to Solar Mikes to talk some Solar Power & see what we can come up with for the Winnie Wagon.  Not as elaborate as last time because our boondocking trips will be shorter in duration.  Just enough to get us comfortably by without having to rely on a noisy generator or a crowded RV Park. 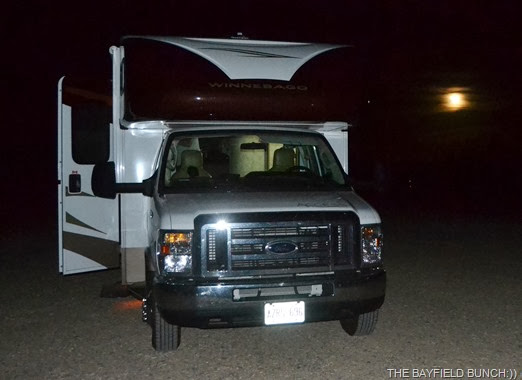 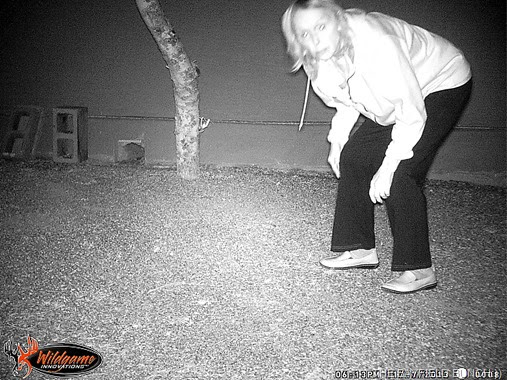 AND THE ONLY CRITTER WE CAUGHT WITH THE CRITTER CAM LAST NIGHT WAS THIS ONE…………………..

--------------------
- Tourists see the world, travelers experience it.
- Home is where your pet is:))
- "If having a soul means being able to feel
love and loyalty and gratitude, then animals
are better off than a lot of humans."
(James Herriot)
- The pessimist complains about the wind; the optimist expects it to change; the realist adjusts the sails -William Arthur Ward
- The only thing better than right now will someday be the memories of right now...AL.
- It is not so much having nothing to do as it is not having the interest to do something....AL.