AN UNEXPECTED ARIZONA THUNDER STORM HAD US SCRAMBLING TONIGHT 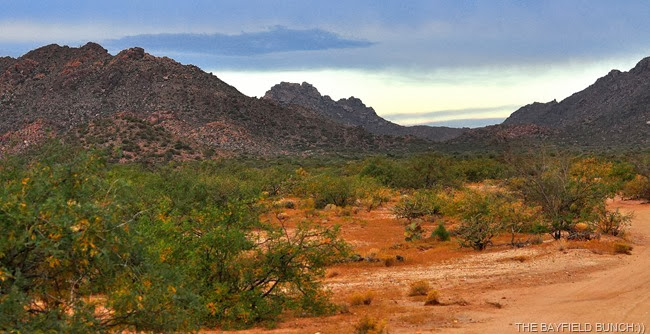 Unlike the previous morning Kelly didn’t say if we had caught another Skunk or not so I assumed we had not.  I assumed wrong.  We indeed had caught another Skunk & when I slipped out the back door to retrieve the Critter Cam I could see this fellow meant business.  He turned & raised his tale so I quickly retreated into the house.  Undaunted I went out the front door & down around the end of the house where I figured I would have a better chance to get the cam without being blasted.  Held my flashlight on him while I clumsily unhooked the cam from the ladder I had it attached too.  He was in a firing position & could have easily pulled the trigger on me but he did not.  Camera in hand I quickly retreated back in the house unscathed or in this case……..unskunked. 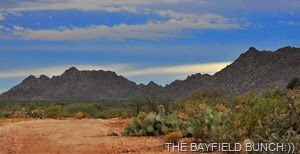 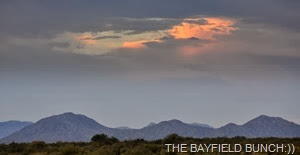 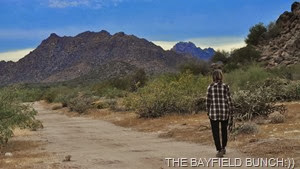 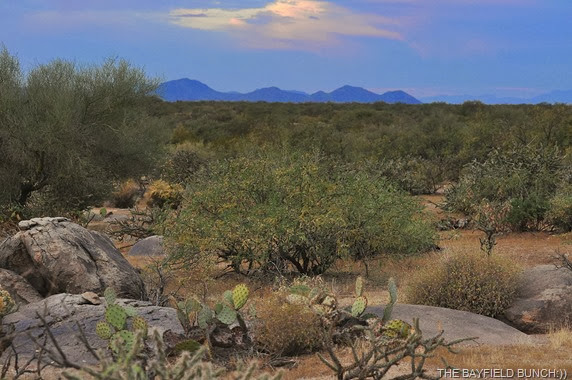 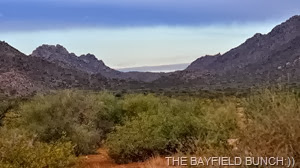 Disappointed I only had 3 blurry unrecognizable photos on the Critter Cam.  Have to chock that up to ‘Operator Error’ I guess.  I may have had the cam aimed a tad to high.  There is no sighting device on these cams & one just aims the cam in the general direction of the expected subject.  Learning as I go……………….. 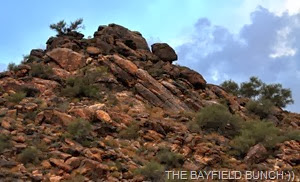 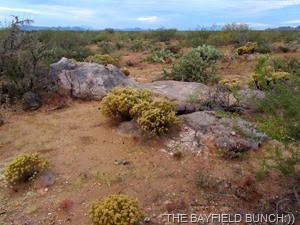 I was in the shower again when Les came to pick up the Skunk.  He was here & gone before I even had a chance to take a picture of Skunk number 2.  Traps are again set for tonight in case there are more.  Would like to get a photo of the critters actually exiting out of that big hole in the foundation.  That way we would know for sure they are not coming in from the outside somewhere.  Maybe slipping through our gate at night.

Was happy to see a high cloud cover this morning.  Knew it would be cooler for working outside today.  And it was.  The clouds gave us some nice subdued pastel colored lighting on our walk this morning.  Love to see the desert landscape bathed in those kinds of soft hues.  We also made it a point to walk earlier.  A quiet peaceful morning walk always starts our day off on the right foot.  We found by walking later around 8 'o’clock we were meeting too many other people out for their morning walks & that often leads to talking, talking, talking, when we would both prefer to be quietly walking, walking, walking. 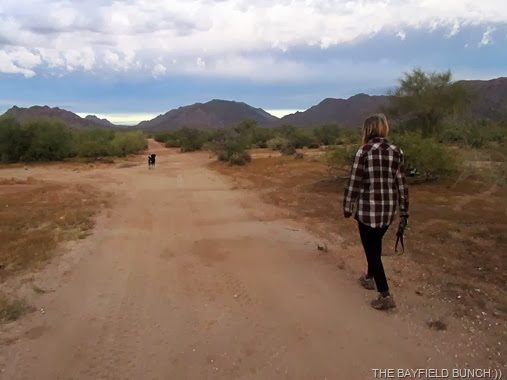 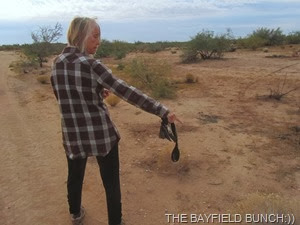 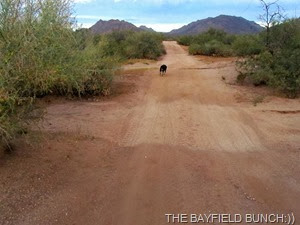 KELLY POINTS OUT SOMETHING OF INTEREST WHILE PHEEBS RUNS ON AHEAD 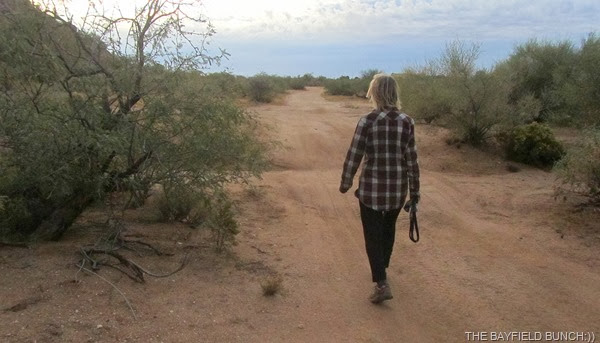 I have absolutely no idea how or where I lost a day this week but somewhere along the line Thursday totally disappeared on me.  I thought today was Thursday & when Kelly insisted it was Friday I just couldn’t believe it.  Or was it Tuesday I lost.  I have no idea where Wednesday went.  In fact I’m not even sure I was really here for any of those days.  I’ve never had a day vanish on me like that before.  Well not that I can remember anyway.

Kelly & I headed over to North Ranch for a couple more loads of free dirt this morning & I went back for another load myself this afternoon.  Probably be back tomorrow for more.  In between those loads Kelly had a couple garage sales to check out as well.  Pheebs & I waited in the Jeep.  Looking for one of those garage sales we discovered another part of Congress we had never seen before.  Located just west of town on the south side of highway 71 was a nice little community of well kept homes called Congress Village.  Really liked the desert landscaping & south west ranch style architecture on many of the houses.  Saw 4 for sale but they were all out of reach for us.  Nice views out there of the Weaver & Date Creek Mountains.………………. 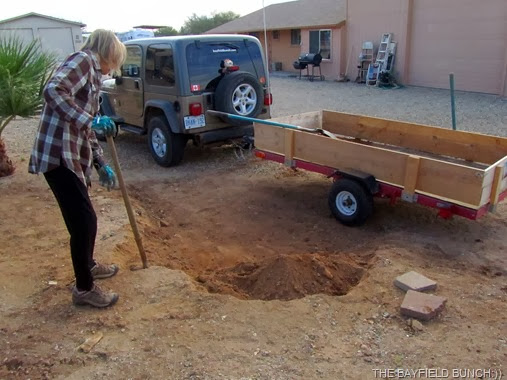 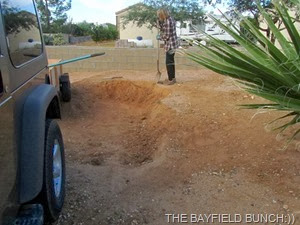 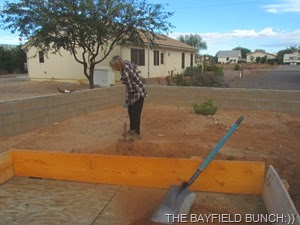 Worked on my flower beds project again & by late afternoon I was whupped & in my recliner resting my legs.  It’s my darn legs that get tired on me all the time.  Probably a good thing because that at least makes me go sit down.  Had figured on dropping over to Mike & Pat McFalls for their 4 o’clock Happy Hour today but we never made it.  We were both just too tired to even go open the gate. 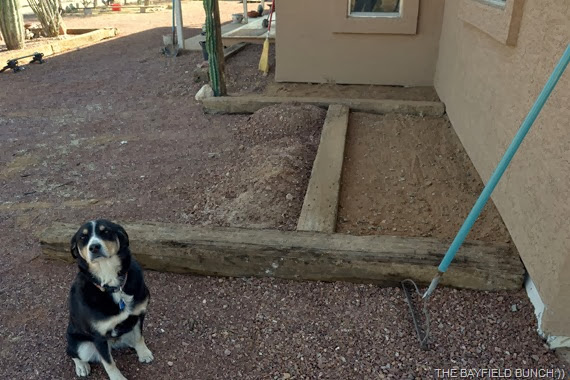 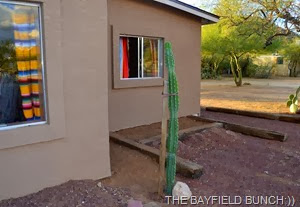 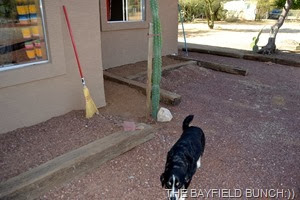 Kelly was busy packing the rig for next week’s trip over to that California place.  Because of this week being shorter for me (remember I lost Thursday) I am going to have to scramble to get my rig loading chores underway as well.  Geeez I didn’t even get the rig washed from our trip down from Canada.  Oh well, no use wasting precious energy units when we’ll just be out into the dusty desert with it next week anyway. 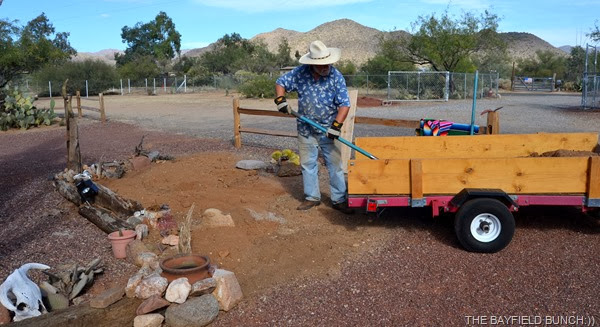 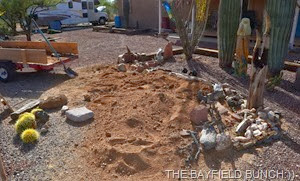 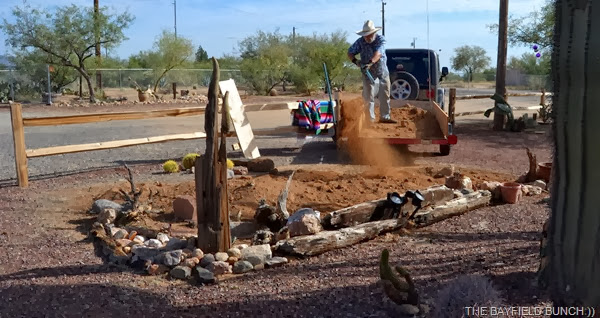 MOVED MYSELF A FAIR BIT OF DIRT TODAY

RETIRED ROD found the rattle in his new Jeep.  Well, he didn’t find it but the Jeep garage finally found it.  Took them awhile to track down the source.  Rod will tell you where that source was at, THE JEEP RATTLE. 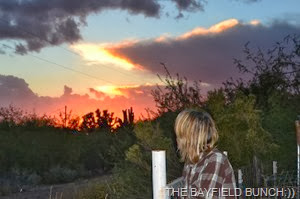 KELLY WATCHES THE SUNSET FROM OUR BACK YARD

We were totally caught off guard tonight by a fast moving Arizona thunder storm.  Heard the thunder & saw the lightning so dashed out of the house to roll up Jeep windows, bring in the rig’s slide, close the vents & put up the cab windows.  I quickly got things rounded up on the porch as the first rains were upon us but as the rains got heavier I had to bring all that stuff inside.  Quickly retrieved the Critter Cam, folded up & put away lawn chairs, & raced around looking for anything else I had left lying around outside.  As I am typing this now I am slightly on the damp side & the rain is really coming down.  Lost the satellite signal for our TV.  Could be heavy rain laden clouds or it could be one of our satellite dish legs has sunk into the mood throwing us off the satellite.  And yep, we sprung us a couple leaks.  Nothing serious but leaks nonetheless…………………….. 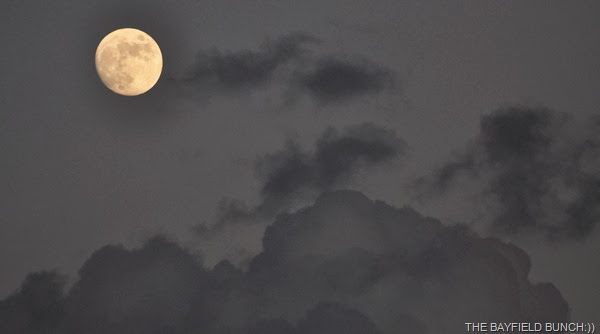 Q: How many skunks does it take to make a big stink?
A: A phew!

Q: How much money does a skunk have?
A: One scent!

Q: What did the judge say when a skunk entered the courtroom?
A: Odor in the court!

Q: What did the religious skunk say?
A: "Let us spray!"

Q: What do you call a flying skunk?
A: A smell-icopter.

Q: Why are skunks so smart?
A: Because they have a lot of scents!

Q: Why did Sally bring her skunk to school?
A: For show-and-smell!

Q: Why didn't the skunk call his parents?
A: Because his phone was out of odor!

Q: Have you heard any good skunk jokes?
A: You don't want to, they really stink!