EVER NOTICE SOMETIMES DURING CERTAIN CONVERSATIONS, YOU MIGHT GET BLANK STARES……… 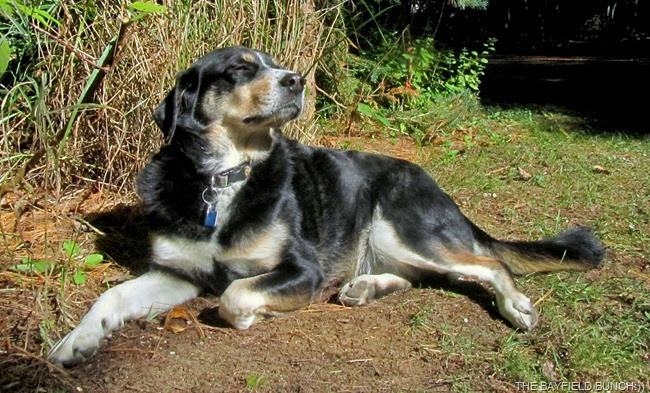 JUST SOAKING UP SOME OF THESE MIGHTY GREAT AUTUMN DAYS

Another fine October morning & we spent most of it buzzing about the RV. Kelly continued loading & I busied myself cleaning Winnie's windows, etc. Took the motorcycle for a nice ride & returned it right into storage for the winter. I sure didn't get too far on it this past summer. I logged a total of 531 kilometers which probably works out to around 350 miles. Oh well, by keeping the mileage down the bike will last a lot longer. Total kilometers on the 2002 Honda Shadow Aero 1100 is 43,860 kilometers which I figure is somewhere around 28,500 miles. Bikes hardly broke in yet. I have ridden my Honda 8,122 miles since trading in my 1984 Yamaha Virago 750 on it back in May of 07. 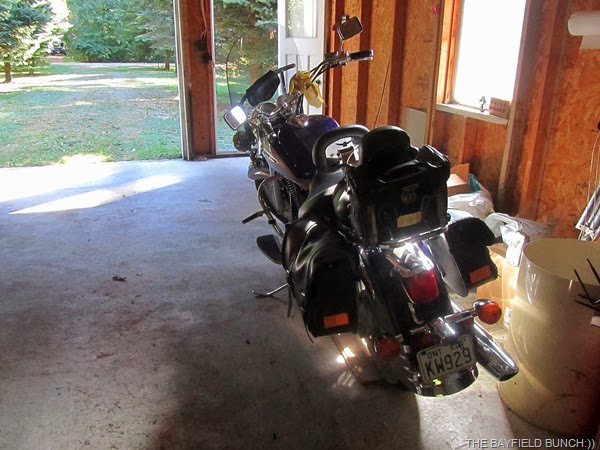 BIKE IS IN STORAGE FOR THE WINTER 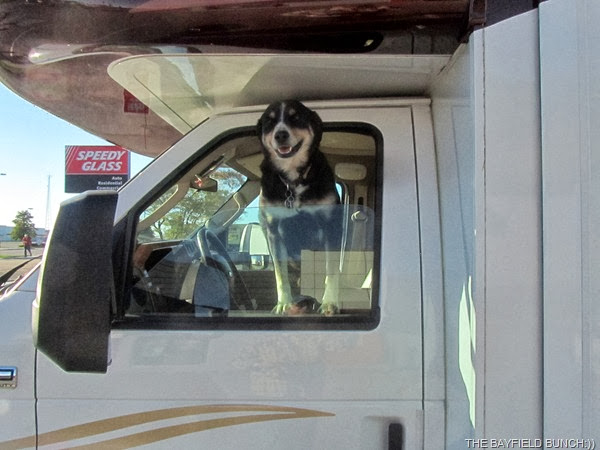 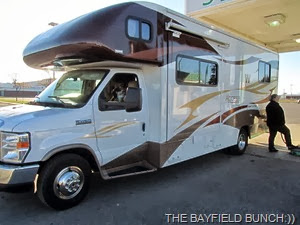 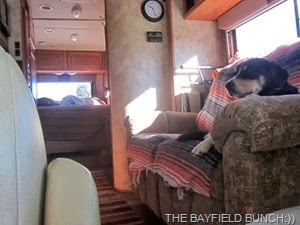 LAST CANADIAN GAS STOP UNTIL NEXT APRIL & PHEEBS RIDES ON THE LOVESEAT COMING HOME
Snowbirds & fellow Boondocker friends JEAN & SKIP from Vancouver Island BC are into their 4th day of travels since leaving home. They had originally planned on heading to Utah first but cold temperatures have steered them over into Nevada. Weather has a habit of doing that to RV’ers sometimes.  Fortunately they are not locked into reservations or time frames so are free to wander.  Nice way to travel:)) 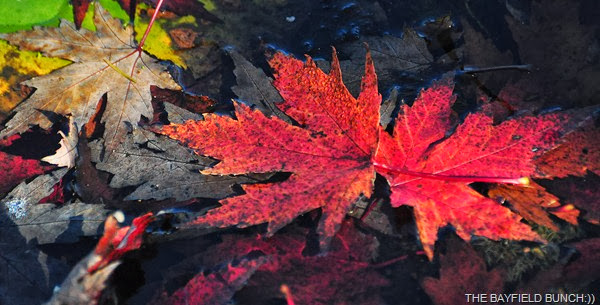 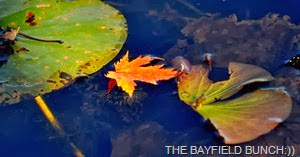 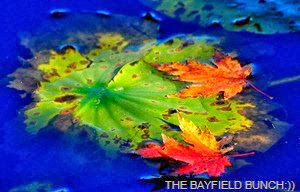 Never picked up a camera today so tonight's photos are a collection of unused pics from the last 3 or 4 days. I'm hoping Pheebs & I can get a few more scenic gravel runs in before we head south a week from today. As nice as it is here right now I will be glad to be on the road heading for the South-West again. 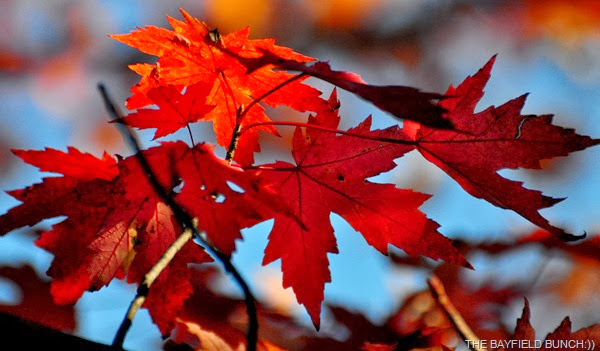 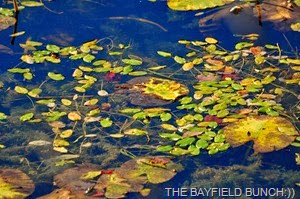 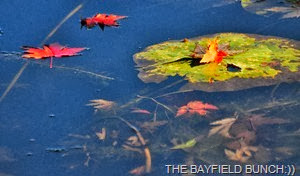 Ever notice sometimes during certain conversations you might get blank stares. Sometimes happens when talking to a casual stranger, somebody you just met or maybe an old friend you haven't seen for awhile. We here in RV Land tend to take our RV lifestyle for granted. We are all quite familiar with every day words such as RV (Recreational Vehicle), Full Timing, Diesel Pusher, Toad, Fiver, Rig, Slides, Boon Docking, Black Tank, Snow Birding, Brake Buddy, Hitch Pin, Hitch Itch, etc. These same words however can bring a completely blank stare when talking to someone who is not of, nor is aware of the RVing world. As strange as that may seem to us, we still have to realize and accept the fact we are in the minority of understandable and socially acceptable lifestyles. I'm sure all of us at one time or another have found themselves on the defensive end of a conversation trying to explain the RVing lifestyle concept to someone who just doesn't get it. I have read blogs and talked to folks, who when putting their RV dream plans together told absolutely no one about their intentions. No friends, no business associates and in some cases, not even family. I'm sure there are Full Timers on the road who's casual friend's have no idea where they are or where they have disappeared to. Might even be some family members left wondering too. 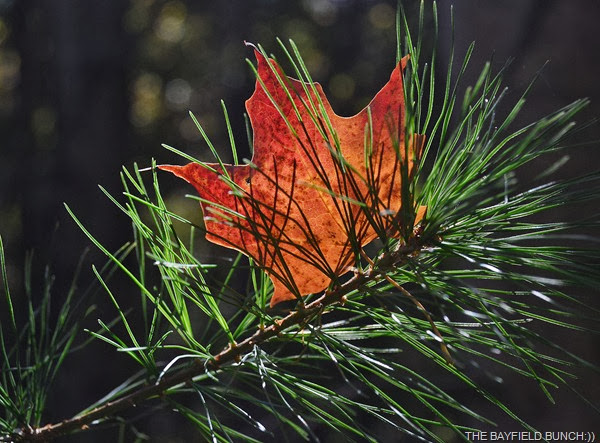 One of the quickest ways to attract criticism in our society is in daring to be different. Society tends to set a normal style of life…….as for example, working 9 to 5, couple kids in school with a nice house on a nice street in a nice town. And a nice car in the driveway of course. Deviate too far from this and eyebrows begin to get nervous. Whispers can be heard. To the majority of the norm it is totally inconceivable that someone would sell their precious car and house along with all their worldly possessions to go live in a steel and fibreglass box on wheels. No roots, no social club, no steadfast daily routines, no same-same friends, no seeing the Grands 3 times a week or eating at your favourite restaurant 4 times a month.  No being in that same church pew every Sunday morning year after year after year either. How is it possible to live without the daily normalcy of routine. How can people exist without all their 'stuff' clustered around them. 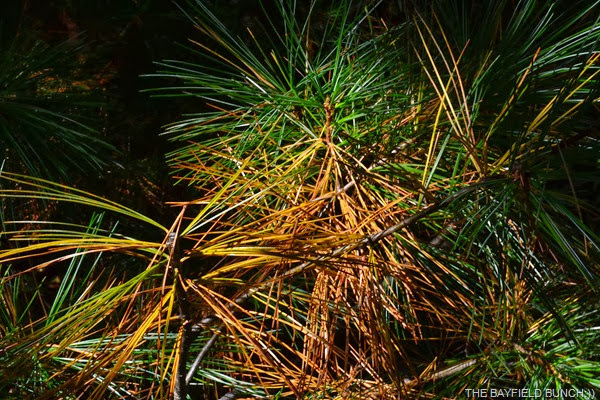 I can't remember when it was I first became aware of and interested in the RV world but it was a very long time ago. I have always had that wanderlust feeling right from early childhood but it was probably in my first days of tent camping that my mind began to formulate the understanding and feasibility of a different kind of realistic lifestyle. The word 'Gypsy' still did not have a good reputation back when I was a kid so one had to be careful when expressing any kind of interest in living a life other than the accepted norm. A kid sure didn't want to be associated with those wild Gypsies after all. Luckily, along with a lot of other old wives tales and myths, the stigma attached to the word Gypsy has long ago gone the way of the Dinosaur. Well, at least in my sometimes topsy-turvey little world it has. 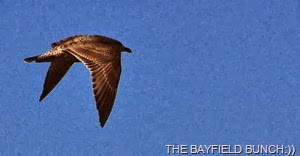 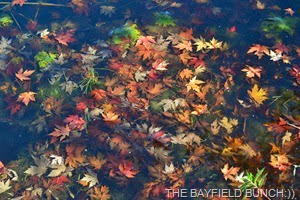 How fortunate I consider myself to be since making the leap into the Nomadic lifestyle even if it is only half a year at a time. Our first rig back in the late 90's was a 17' Class C Dodge Centurion and from the time we headed that little RV down the road until now we have never looked back. Although not Full Timers we do manage to spend 5 or 6 months a year as Snow Birds traveling and living in our Motor Home in America's great Southwest. Our alternating lifestyles have brought us a far greater understanding of not only our surroundings, but ourselves as well. Personally, I much prefer our life on the road as opposed to our sitting at home life but that's just the way it has to be right now. My mind sometimes spends too much time on this problem trying to figure out a reasonable solution and agreeable compromise on how to better tip the balance in favour of spending less time at home and more time on the road enjoying all the benefits the RV lifestyle has to offer. A lifestyle outside the box, a lifestyle outside society's 'norm' and a lifestyle like no other…………. 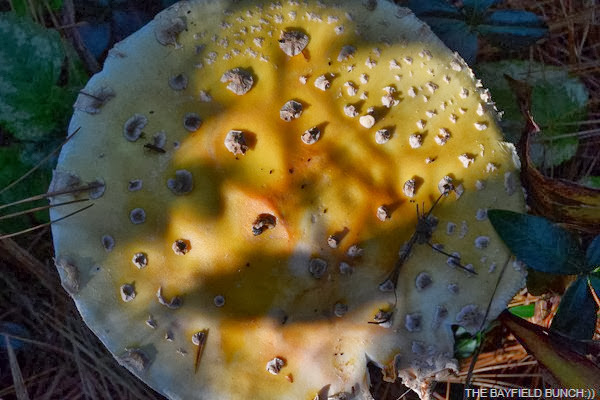 ANOTHER ONE OF OUR BACKYARD MUSHROOMS

With our temperatures in the low 70's today under sunny skies I couldn't help thinking as I puttered around outside, it just cannot get any better than this. Sunlight shining through gold & orange colored Autumn leaves & a soft warming breeze in the tops of the pine trees. Bees buzzing about & unseen crickets chirping their late Autumn charms. Tis the season magic abounds in the land's early October air. A mere month from now this landscape will be gray & barren of it's Autumn warmth & colors. Temperatures will be much colder as icy winds come sweeping in off Lake Huron bringing rains & probably early snow flurries. As long as we are financially able & healthy enough to travel we will always look forward each & every October to escaping the harsh ravages of winter. Even a mild winter here in no way compares to the weather down south. Not even a little bit. Oh the horrors when one day our traveling days are ended. Oh the horrors.............:((

-For every vision, there is an equal and opposite revision.
-Four-wheel-drive just means getting stuck in more inaccessible places.
-Free advice costs nothing until you act upon it.
-Friends come and go, but enemies accumulate.
-Frustration is not having anyone to blame but yourself.
-------------------------------------------------------------
- Tourists see the world, travelers experience it.
- Home is where your pet is:))
- "If having a soul means being able to feel
love and loyalty and gratitude, then animals
are better off than a lot of humans."
(James Herriot)
- The pessimist complains about the wind; the optimist expects it to change; the realist adjusts the sails -William Arthur Ward
- The only thing better than right now will someday be the memories of right now...AL.
- It is not so much having nothing to do as it is not having the interest to do something....AL.