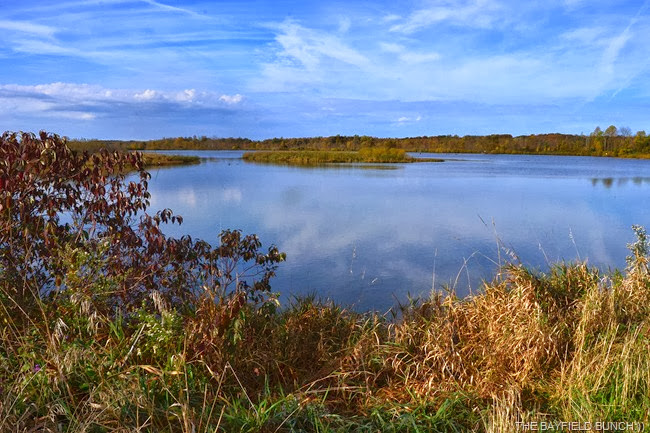 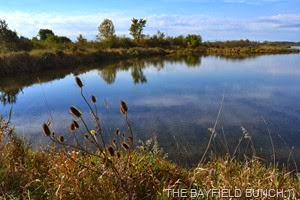 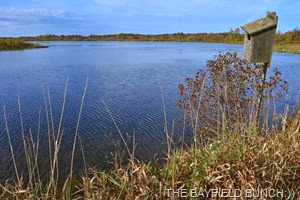 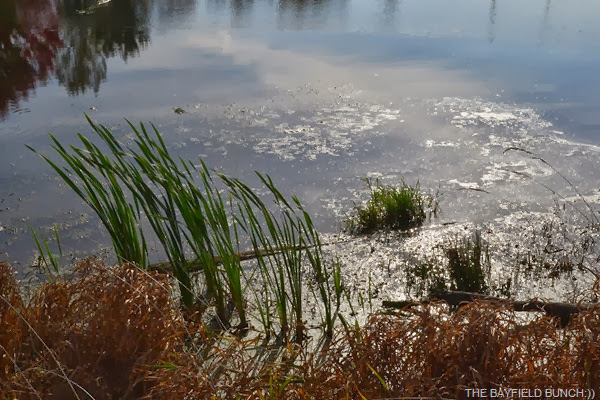 Slept all night with my fingers crossed that it would be sunny this morning & not raining. You know, sometimes that crossing of fingers really works. In fact today's rains never did show up as predicted. However, not knowing that Pheebs & I were on the road early for what turned out to be a 5 hour outing for us. 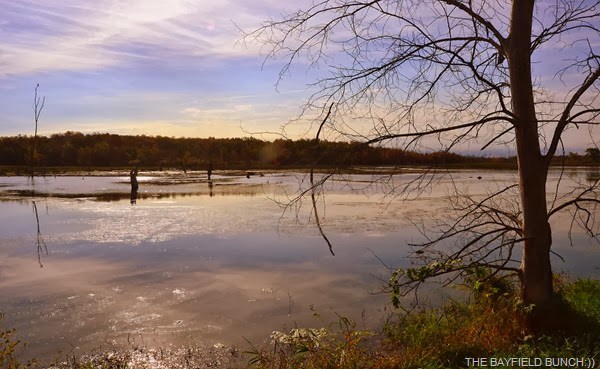 COULD HEAR MANY DUCKS QUACKING WAY OUT THERE IN THE MARSH SOMEWHERE
Think I dodged a nasty bullet while waiting in a TIM HORTONS drive-thru line up this morning in Clinton Ontario.  I could have ended up on the receiving end of a morning coffee mob gone wild.  Pheebs & I were headed over to the HULLETT MARSH early & decided to grab a coffee & carrot muffin to go at Horts.  Soon as I pulled in I noticed people standing in the parking lot & a wire fence erected around the building.  Also noticed some big metal dumpsters.  What I didn’t notice was a portable Tim Hortons trailer sitting at the north end of the building.  I was soon to wish I had recognized that trailer for what it actually was.  Drove slowly around the back of the building & entered the drive-thru lane.  Only a couple cars ahead of me.  The speaker box had a big sign on it saying to proceed to a portable speaker box.  I didn’t see any other signs.  Moved ahead 20 feet & a lady came on the portable box & I placed my order.  She told me the price & I moved up to the window.  Usually they are pretty quick but the window remained closed.  Waited, waited, & waited some more.  Meanwhile in my rear view mirror I saw traffic building up.  Figured I was at the head of the usual 652 car line-up.  Well there always seems to be that many cars to me anyway.  Looking in the window I noticed something was not looking quite right inside.  Staring at the interior it dawned on me that there was no interior.  It was gone.  Looking closer I could see the inside was totally gutted right down to the bare concrete floor which even had a trench dug in it.  In my confusion I figured the ladies must be making the coffee back around the corner somewhere near the rear of the building.  Unfortunately my reasoning powers sometimes take awhile to bring me to logical conclusions.  Somewhere in the fog of my confusion I hear the distant voice of the lady in the speaker box about 2 cars behind me.  That kind of brought me out of the fog a bit & I glanced in my side mirror to see a girl in the car behind me leaning out her window waving her arm furiously & hollering at me……MOVE!!!!  In a panicked split second now laced with some real fear I suddenly understood what that trailer was I had seen pulling in.  It was the mobile Tim Hortons coffee trailer where I should have been 5 minutes before picking up my coffee.  Popped the clutch & took off around the corner like Jack the Bear.  I knew the unruly coffee stressed mob would be close on my heels with pitchforks, baseball clubs, & tire irons.  The lady in the mobile sensed my dilemma & seeing the stark terror on my face practically through my coffee & muffin through my open window as I hastily whizzed by heading for & seeking the quiet safety of the countryside nearby.  Whewwwwww, close call!!  Never, never, get between the morning coffee mob & their caffeine fix. 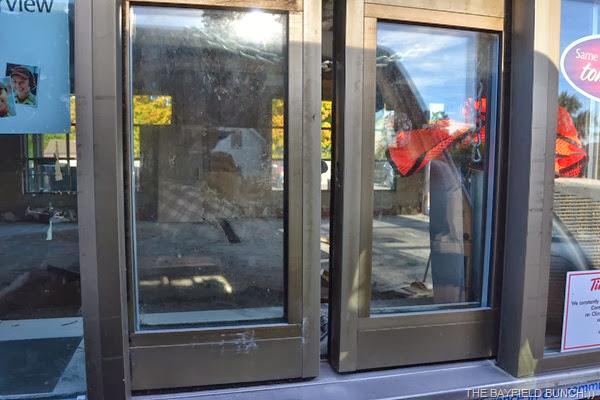 NOW WHY WOULD MY BRAIN SIT HERE FOR NEARLY 5 MINUTES LOOKING IN THIS WINDOW EXPECTING A COFFEE TO APPEAR????
Being back in the security of my element again Pheebs & spent about an hour in the Hullett Marsh exploring around some new areas & revisiting some old spots. Aside from a colorful bird which may have been a type of Pheasant we were not lucky enough to see too much wildlife. I thought a large bird atop a dead tree out in the Marsh was probably a Red Tail Hawk. The bird was in shadow but I took a 300mm shot of it anyway. Later in my Picasa photo editing program I cropped in close on the bird, enlarged & lightened it. Very surprised to see it appears to be a Bald Eagle. Not very often I have seen Eagles in these parts. 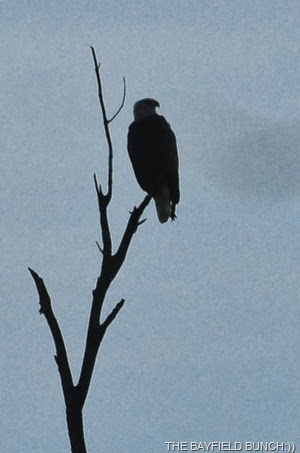 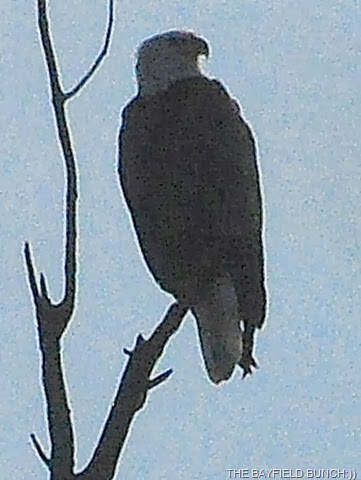 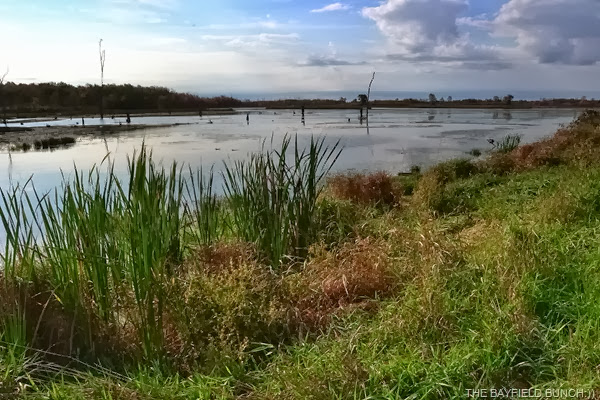 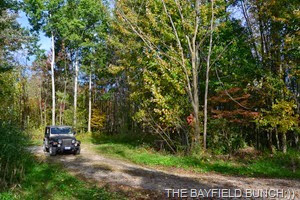 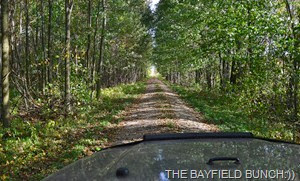 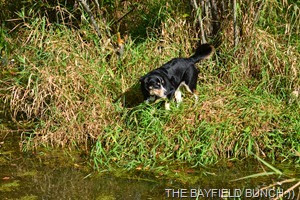 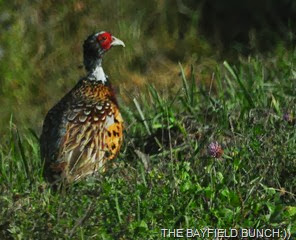 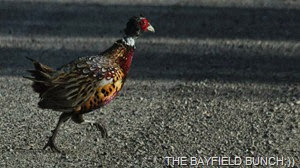 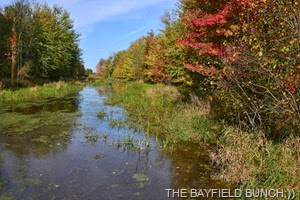 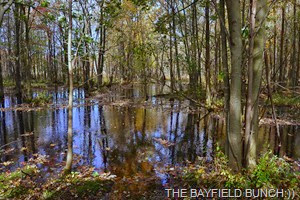 With our temperature's soaring into the 70's Pheebs & I were able to cruise the countryside with windows down. Just another one of those magical Autumn days I love so much. Farmers were sure busy in their fields harvesting the bean crops. Large combines, tractors, & wagons on the roads moving about between the many bean fields. Had to keep a wary eye in my rear view mirror. We usually crawl along about 20mph enjoying nature's scenery so we have to be careful not to get mowed under by a big combine barrelling up behind us. Those young farm fellows in their big green machines do not like doddering Seniors getting in their way & holding them up.

AND SOME OF THESE FELLERS WERE REALLY RAISIN UP THE DUST
Our Autumn colors have not peaked along the bush lines yet but that may happen next week. Individual trees are sporadically turning & our countryside's Autumn colors are slowly coming alive. 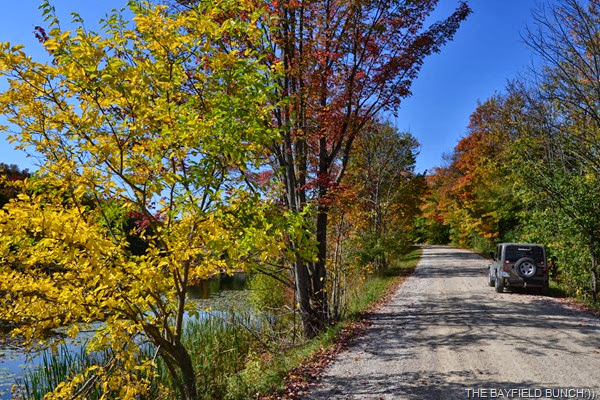 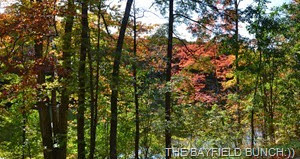 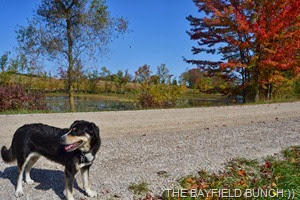 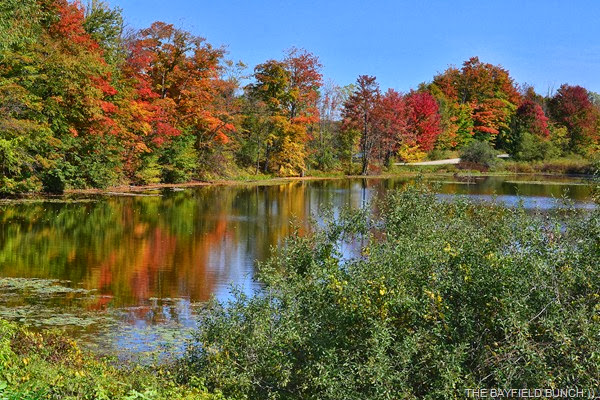 Question in our Shout Box asks, "What is the deal now with taking meat or dog food etc. across the border A few years back it was easier to take NOTHING. You mentioned about Kelly loading the can cupboard".............We do not take any meat whatsoever, cooked or uncooked. No fruits & no vegetables. Dog food must be made in the States & remain unopened. If in doubt about something, don't take it. Rules have a habit of changing at the border & you do not want to get yourself pulled over for an agriculture check. They are no fun!! Seems there were a couple other questions from readers somewhere but they are escaping me at the moment. 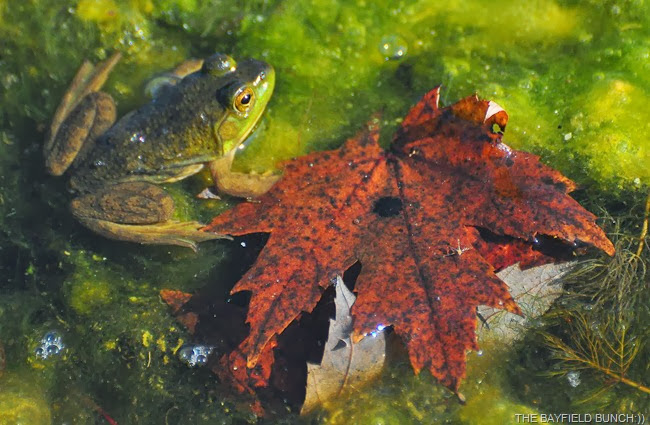