Dag Nabbit!!  Just after saying in Thursday’s post we probably would not be in another Cracker Barrel for 6 months there we were this morning in Gallup New Mexico less than 21 hours later seated for breakfast at Cracker Barrel.  Well, ya just don’t know do ya……………. 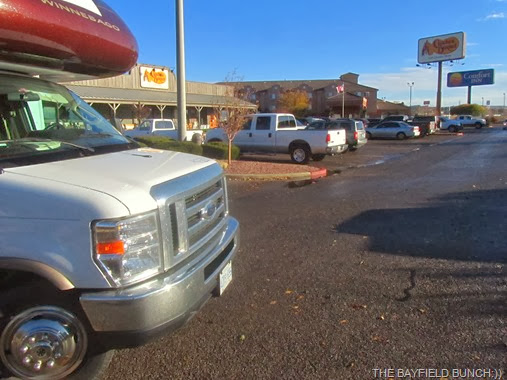 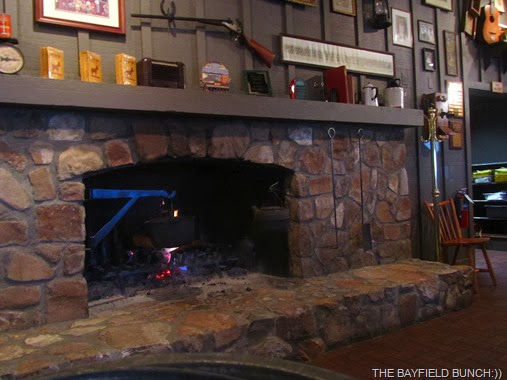 HAVE ALWAYS LIKED CRACKER BARREL’S AMBIENCE
Rained most of the night but quit about a half hour before we headed out about 6:40 a.m.  Nice to not have freezing cold morning temperatures for a change.  And did I mention we had our A/C on a couple days ago.  Yep, we’re on the desert floor now & it’s getting warmer.  Supposed to reach 88F in Congress Saturday.

So nice to see big storm clouds moving by in the opposite direction we were going.  Watched another great sunrise in my driver’s side mirror.  I-40 remained wet all the way to Gallup as we passed through intermittent rain showers.  Low fog in some far away areas & distant mountains were wrapped in sinewy Angel Hair.  Remember that’s the stuff we used to put on Christmas trees.  Watched for but never did see any rainbows as we passed through sunlit rain showers.  By the time we reached Gallup for breakfast we were in full sunshine with big white puffy clouds.  Nice:)) 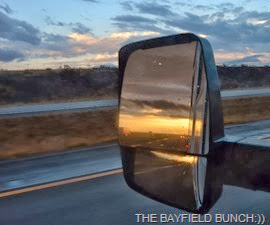 SUNRISE IN MY DRIVER’S SIDE REAR VIEW MIRROR
It was Kelly this time who mentioned there was a Cracker Barrel ahead of us in Gallup & that is how we ended up there.  Big breakfast which we later finished off for supper.  Around the corner from Cracker Barrel was a Walmart so popped in their for some groceries to take on home to Congress.  Turns out this is the same Walmart parking lot we stayed in last year on Halloween night.  The next morning we made the last leg of the journey down through the Chino Valley, Prescott, Yarnell, & home.  But not today………………….

BET YOU DIDN’T KNOW THIS IS HOW THEY MAKE THOSE BIG CLOUDS OUT HERE:)) 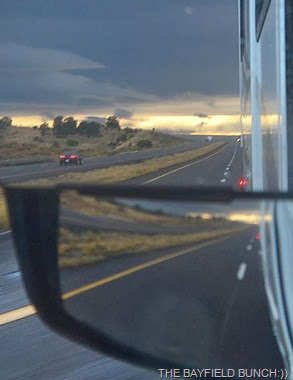 Our Ford E450 sure had another work-out today with all the moderate hills & grades as we I-40’d our way Westward.  Just love all the western scenery going by & the long 40 & 50 mile views to distant horizons & mountain tops.  And we are back in the land of long seemingly endless trains.  We can see them stretching & winding their miles long serpent like chain of train cars across the desert floor.  This is the land of big.  Big skies, sweeping panoramic desert landscapes, towering mountains, pine forests, & views in all directions that stretch eyeballs & imaginations to their fullest.  There may be those who do not like this kind of terrain & then there are those of us who just love it:)) 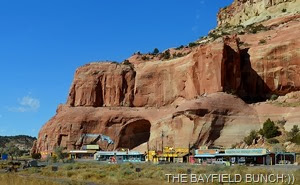 AT LAST………….ARIZONA:))
By the time we reached Flagstaff around 3:30 this afternoon I was beginning to feel a  bit ker-pooped.  Knew we could push it & make Congress but it was going to be late afternoon & maybe even early evening.  That was just too late after a long day on the road to have to get water turned on in the house etc. etc.  And besides, morning light would be nicer.  Last year we arrived in late morning & I remember how nice that felt to be relaxed when we reached our house.  So today by the time we reached our I-40/Chino Valley turn off at Ash Fork we had made our decision.  We would stay in Ash Fork for the night & head for Congress at first light in a refreshed state of mind. 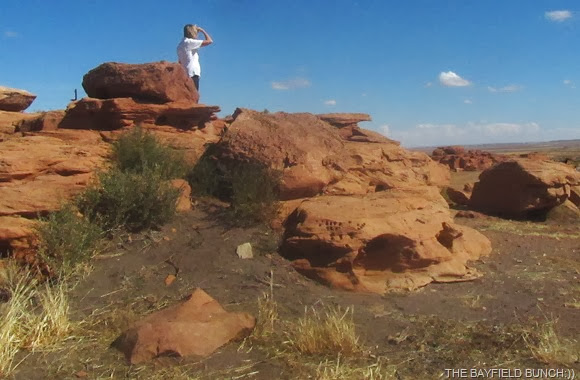 I THINK I CAN SEE ARIZONA 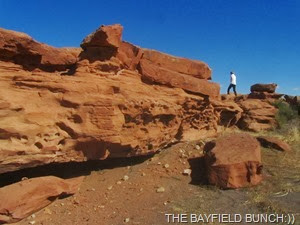 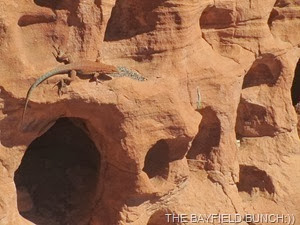 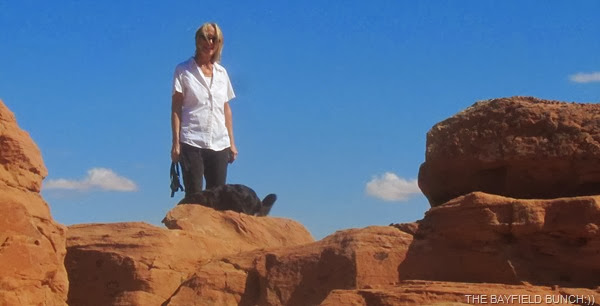 A REST STOP AREA EAST OF FLAGSTAFF ARIZONA
Ash Fork has been nothing more to us than the place we either get on or off I-40 so we knew nothing about the little settlement here.  Kind of a dusty little western town with a short main street, a museum, & a tourist info stop.  We were looking for a quiet little hideaway without much luck when we spotted a small RV Park tucked away down a stretch of road that I believe was part of the original Route 66.  Awwww, what the heck, let’s just do it. 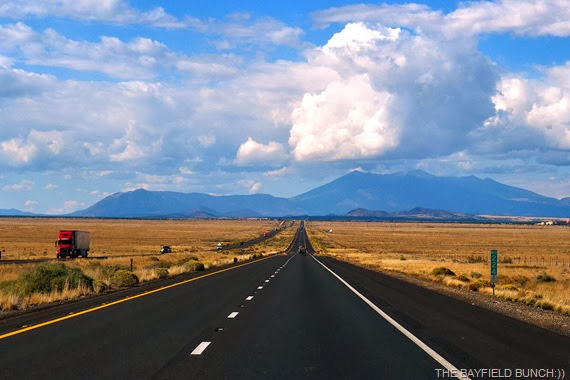 FLAGSTAFF AZ AHEAD & THOSE ARE THE SAN FRANCISCO PEAKS 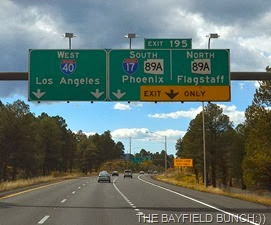 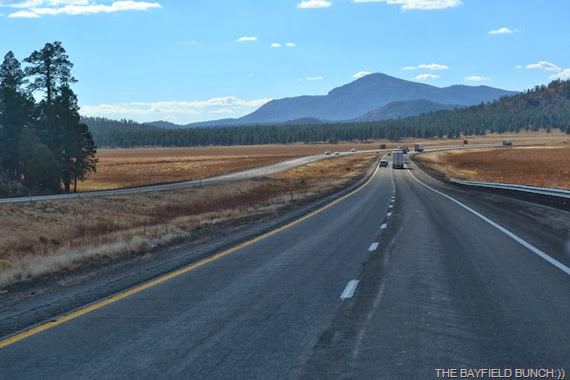 EAST OF ASH FORK ON I-40
The I-40 GRAND CANYON RV PARK was a former KOA that had fallen on hard times.  Visible on the north side of I-40 traffic noise is minimal.  We are parked on gravel under a swatch of shady Utah Juniper trees.  It’s a short pull through site & would not be conducive to anything longer than what we are with our 26’ rig & Jeep.  I like this park because it is not fancy, at least not where we are.  And I like the fact we are the only transients here.  A few other travel trailers & 5’vers look a little more permanent.  Good Verizon signal but no antennae TV channels.  30 amp & water.  Central dump station.  The off season rate was $25 for the night. 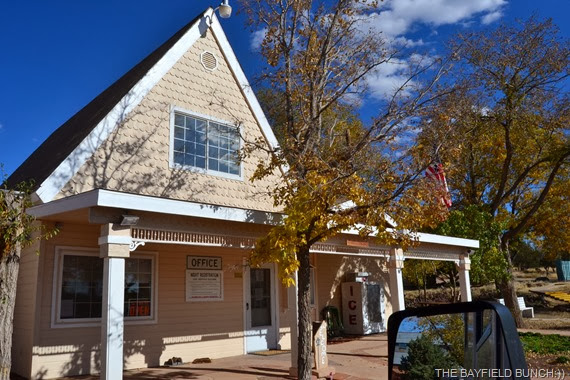 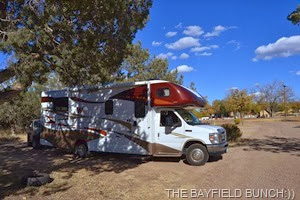 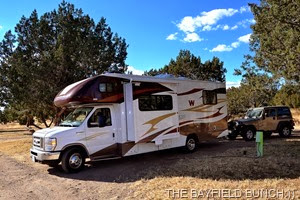 OUR I-40 GRAND CANYON RV PART SPOT FOR THE NIGHT 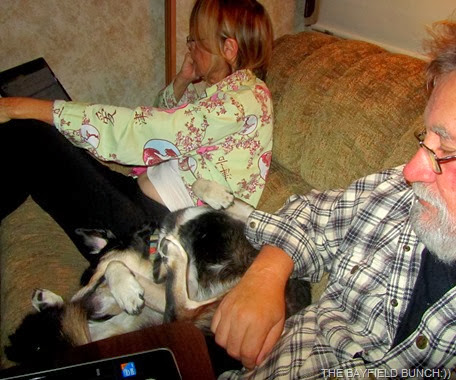 We will roll out in the morning, cross over I-40 & begin our descent down through the Chino Valley.  We’ll slide quietly around the northwest side of Prescott & slip our way down through Skull Valley’s twisting & winding roads to Kirkland & sleepy little Yarnell.  We will gleefully tumble ourselves down the infamously steep & winding Yarnell Hill to our dusty little Adobe house tucked away somewhere on Congress’s Ghost Town Rode near some old western cemeteries & a century+ old semi-abandoned Gold Mine.  Part’s of our house were built from old lumber scrounged from that mine site years ago.  It will be soooooooo nice to be back to our South West home once again.  Ahhhhhhhhhhhh:)) 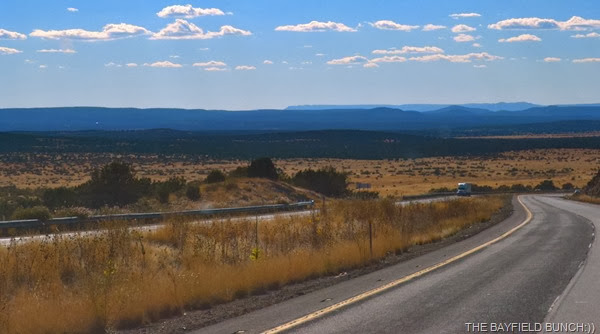 IN THE MORNING WE WILL TRAVEL THROUGH THE CHINO VALLEY AHEAD 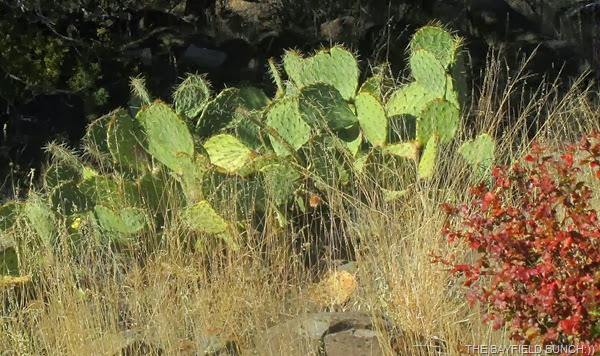