SOME SAD NEWS FROM A FELLOW RV BLOGGER TODAY 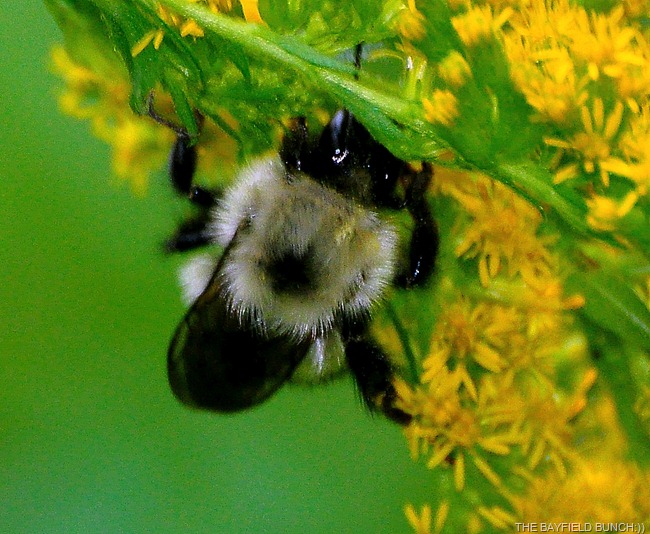 It is a sad day here in Blogville. One of our own Rving fellow bloggers, RETIRED ROD, has just lost his beloved wife Loyce just 8 days after celebrating their 45th year of marriage on September 1rst. It happened suddenly leaving many in a state of shock. Difficult days for Rod & his family as they now try to cope with Loyce's untimely passing. Very sad. And very sad for their little dog Biscuit as well. I understand Loyce & Biscuit were very close. We are all thinking of Rod & his family at this time of sadness & sorrow.  Our hearts go out to them. 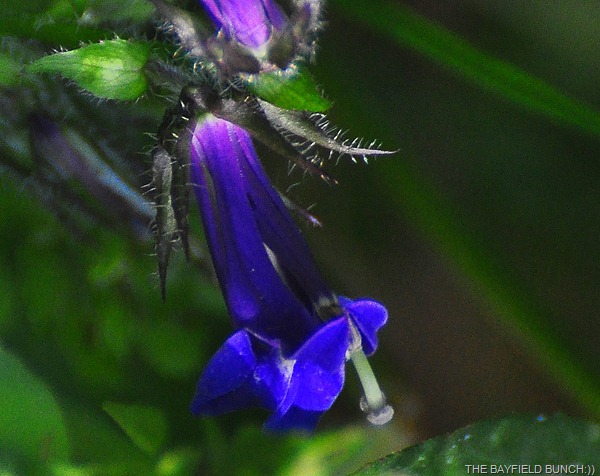 With some hastily written ‘back road’ short cut instructions we were out our driveway heading for a destination in Komoka Ontario by 9 a.m. this morning. Our utility trailer has small tires that are older than dirt so I wanted to stay off the 60 mph highways just in case. Had aired up the tires plus the spare & things looked good to go. Half an hour after leaving I realized we were temporarily off track & slightly lost. My back roads shortcut did not jive with my Map Quest directions. Dead reckoning came to the rescue again but we still had to stop & ask for directions in the town of Parkhill. We weren't too far off course & were soon well on our way again.  Didn’t bring our Garmin Gertie GPS unit because her & I always argue over directions anyway.  Some days she’s right & some days I’m right.  And other days we’re both wrong & Kelly’s right.  Decided to stay on the highway finally because there was hardly any traffic anyway. Bonus. We arrived at our destination in Komoka shortly before 11. 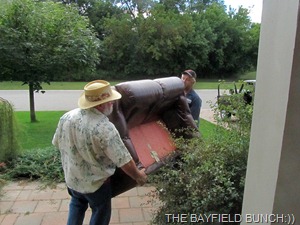 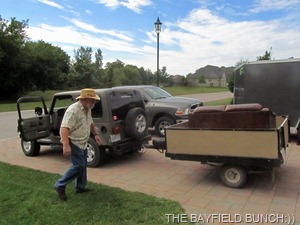 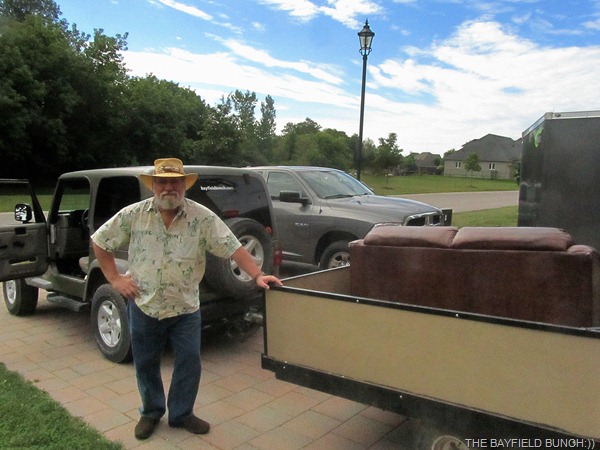 We were very pleased with the NAUGAHYDE Loveseat for sale & found it in great condition. Some may remember that term Naugahyde from a bunch of years ago in the 60’s & 70’s when a lot of furniture & car seats were made from that fabric. It's tough stuff & that is why this Loveseat has stood the test of time. Urban legend says it comes from the hide of a Nauga but if you click on the above link you will see where it really came from. 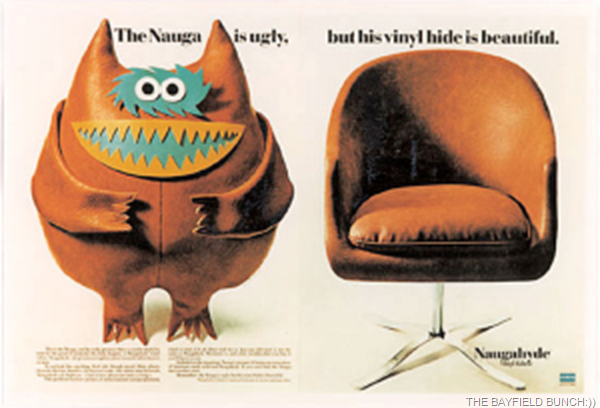 Paid the lady for the couch & her husband helped me carry it out to our utility trailer. Not nearly as heavy as a Loveseat recliner with all the steel in it. No problem heading back to Bayfield as the traffic was still surprisingly light. We did run into a coincidence on the way home though & it occurred at a Tim Horton coffee shop in Parkhill. 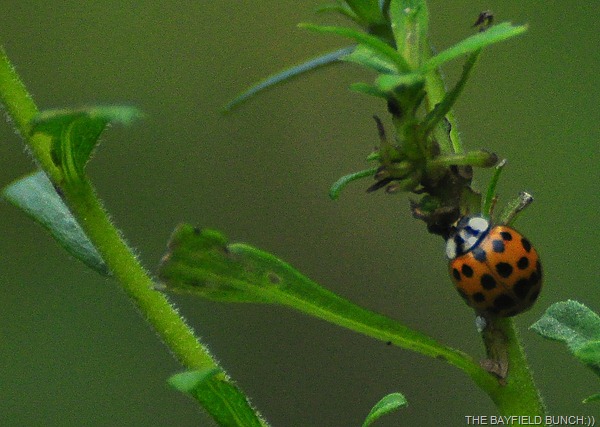 We still had the instructions for the couch/air-bed that Ron Krauter from FOUR SEASONS PERFORMANCE (couldn’t access your site link tonight Ron) had removed from our Winnie Wagon last week. We planned to drop them off in Grand Bend on our way back this morning. While standing at the Tim Horton counter ordering up a couple coffee's to go Ron his very self came walking through the door. He had spotted our Jeep in the parking lot on his way by. He & another fella had just dropped off a couple RV’s somewhere & were on their way back to Grand Bend. We were able to give Ron the couch/air bed instructions right there & that saved us having to go through Grand Bend & construction further north along highway 21 on the way home. Ron says he thinks he has the couch/air bed sold but it will depend if it fits the coach someone is bringing in to his place Wednesday. 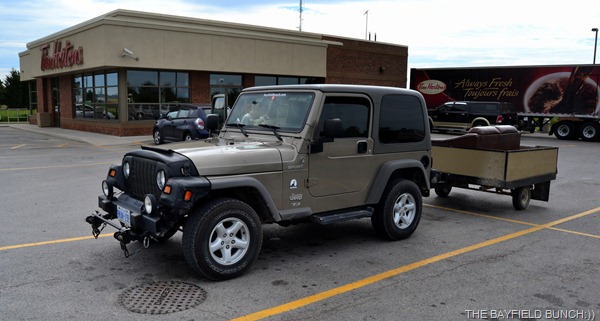 First thing Kelly & I did when we got home was carry the Nauga Monster Loveseat up the steps & set it on our front porch for Pheebs to try out. We both sat on it with her for some snuzzles. We will leave it on our porch for the night because we have a professional carpet cleaning person coming in the morning to do our living room carpet plus the Loveseat/Recliner in the rig. We will move Pheebs Nauga couch into the house sometime Tuesday. 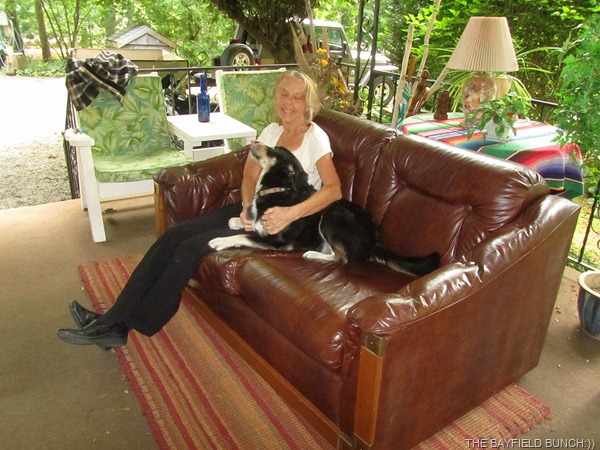 And my apologies to GORDON W for possibly sending him on a wild Goose cyber chase. In Sunday's post I mentioned my pair of new shoes. Gordon's 'Shout Box' question was, "Al, I have no idea what "‘Crawford’ slip on shoes" are. How about a photo or further info". Well, it's no wonder Gordon couldn't find any info on Crawford shoes because these are Hathaway shoes I have.   In what I can only call a 'Senior Moment' I had the wrong name. Maybe had a hang-over from an old Joan Crawford movie or something. They are 'HATHAWAY' shoes & apparently Costgo carries them. Or they did.  If I could have found a good link for Hathaway shoes I would have included it.   Below is a photo of my Hathaways:)) And for some always excellent photography be sure to check out Gordon's professional photography site at GORDON WOLFORD PHOTOGRAPHY.  Now here’s a guy with the patience & smarts to do things right:)) 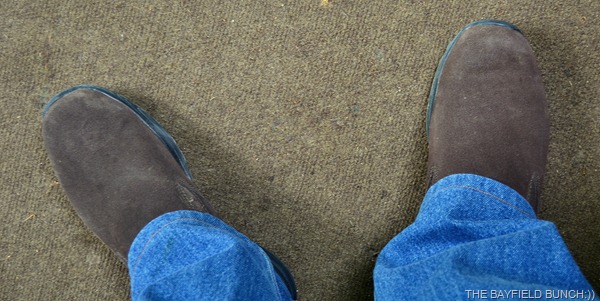 MY HATHAWAYS  ALMOST LOOK LIKE COWBOY BOOTS FROM THIS ANGLE 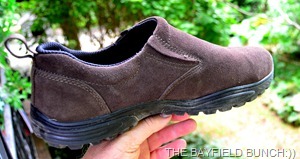 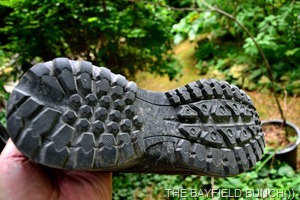 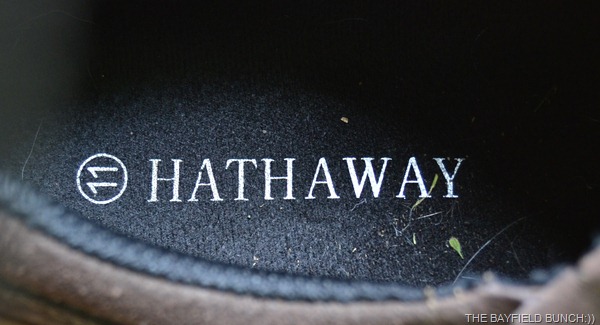 Chinle over at SPOTTED DOG RANCH has picked up her heavy duty Cargo/RV trailer, spent a few nights in it already & is somewhere in Idaho heading who knows where.  Kinda hard keeping track of Chinle sometimes.  Just about as hard as keeping track of RV SUE & HER CANINE CREW.  These Gals sure like to wander.  But it’s not hard to keep track of Chinle’s excited new to her trailer enthusiasm right now though:)) 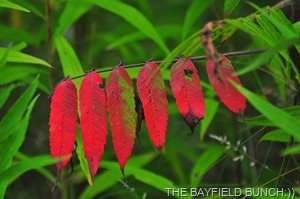 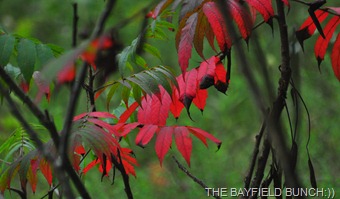 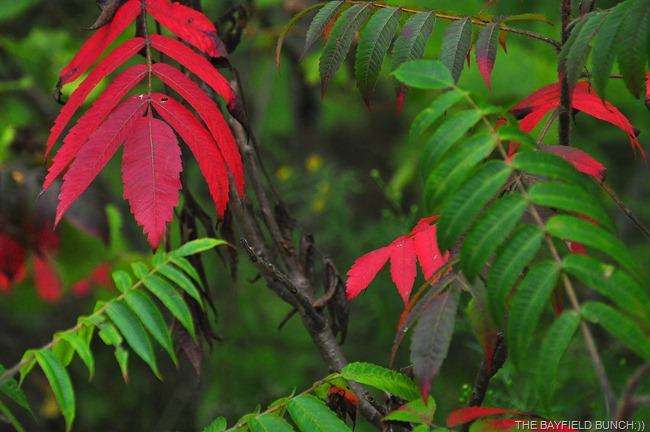 RED SUMAC LEAVES ARE ALWAYS A SURE SIGN OF AUTUMN

GROANER'S CORNER:((  A guy walks in to the Barbershop. Barber says, "What will it be today?" Guy says, "well I want half my hair going backwards with my waves on top, want the other half faded to one side with the back fluffed up like an Afro. And just make it all look out of shape and really messed up." Barber says, "Now why in the world do you want your hair cut like that."Guy says, "That’s how you cut it last time."