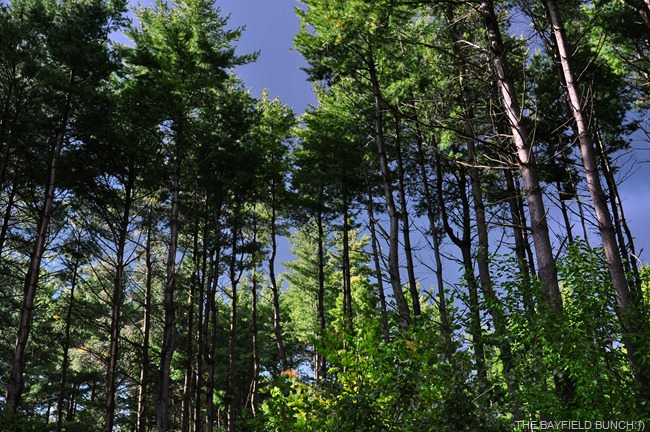 Here we are over half way through September already. For we Snow Birds each day takes on new meaning as we all begin flexing our wings, making travel plans, & checking out some last minute maintenance on our rigs. Maybe a few things already loaded up. Anticipation builds as we think of coming winter adventures in favorite far away places. It is the change of pace I look forward to. A change of scenery, a change of weather, a change of lifestyle. Won't be long somewhere west of the Mississippi when I'll don my big brown cowboy hat for the next 6 months or so. I'll have the 'Sons Of The Pioneers' on the stereo & each day as we travel further west I will be scanning the horizon for the first tell tale signs of mountain tops. Watching the ditches & fields for the first sightings of Cactus. And then somewhere our first Saguaro. Ahhhhh, it will be great to be home again for another winter in America's great South West. 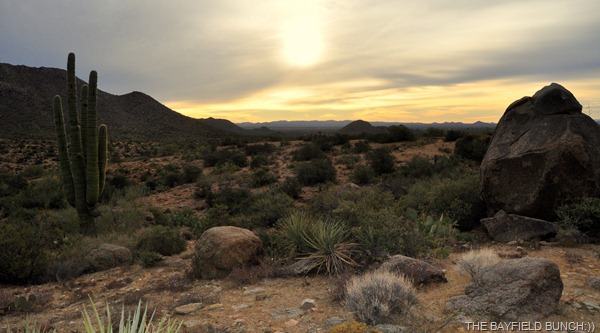 ABOUT HALF A MILE FROM OUR PLACE ON GHOST TOWN ROAD, CONGRESS ARIZONA
But for right now it's back to the reality of today. A sour looking Monday started out completely overcast, cold, & damp. Just about the time Gord the tree cutter showed up a northwest wind blew in taking our overcast away leaving us in a shower of warming sunshine for the rest of the day. Gord finished up trimming & topping one large tree & started on another. The second big pine is the one that drips sap onto the Winnie Wagon. I'll be glad to see it down plus it will give us a bit more sunlight in the area where we park the Winnie Wagon. That tree being down should help with dampness in that area as well.  Pheebs & I kept ourselves busy hauling logs & branches to the Park’s recycle area.  Good old working exercise, the best kind:))

PHEEBS SNAGS A GRASSHOPPER ON OUR AFTERNOON WALK 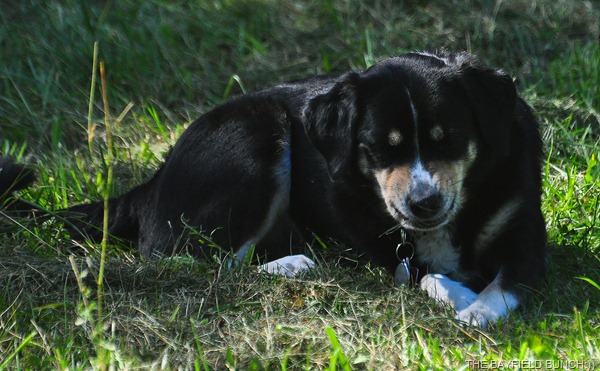 EEEIYOUUUU THAT DON’T TASTE SO GOOD!!

I did try to figure out a way to anchor our loveseat recliner to the floor in the rig but came up short. Thought maybe we could somehow use the seatbelts in the area but no go. It's best to have it secured to the floor in case of a sudden stop or accident. Don't want that loveseat sliding forward into the slide wall & possibly knocking the slide askew. Like I have said many times before, when I want some things done right I have to get somebody else to do them. Ron at FOUR SEASONS PERFORMANCE had offered to help us with that couch installation last time we were there so we called Ron this morning & he said, 'bring the rig on down Tuesday morning." Ron also sold that couch/inflatable bed so he said he had a fistful of cash for us as well. Always nice to have a fistful of cash coming in instead of a fistful of cash going out. 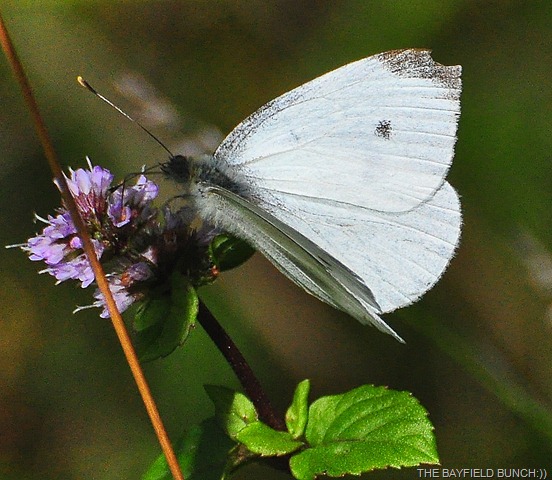 I let my SMUG MUG photo account expire. Despite making half a dozen attempts to organize my thousands of photos I finally gave up. Smug Mug updated itself & launched a brand new re-vamped program touting it as simple to use. Well where have I heard that line before. I did migrate my old account to the new format & immediately found my self in the proverbial forest of confusion. That was the last straw & despite a few attempts at understanding their new program the writing was on the wall & I just let it go. Had an old Flickr photo account from years back so went & had myself another look at that but couldn't seem to get to first base on that one either. Maybe I’m not trying hard enough or not allowing myself enough patience.  But one thing I have totally given up on is trying to figure out my Picasa Web Albums. Probably been a couple years or more since I last put a photo album together. Seems like the great Google Gargoyle is rapidly rolling over me ingesting everything I once felt familiar & comfortable with. I have no interest in social media sites anymore & can't help but think at some point Google will completely swallow up my blog, my photos, & me all in one fell swoop. So maybe that is how my blog will end one day. The great grinding gears of Gargantuan Google's massive techno machinery will rumble through one night in a great cloud of Bravado change & 'poof' I will be gone in a techno nanno second. 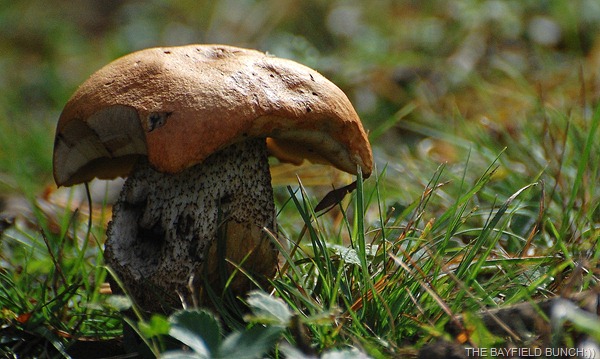 And by golly I watched me a second DVD movie this morning while it was cold & overcast out. And again I liked the movie a lot. Yes, there was some fire, a couple guns, & one feller did get clunked with a board or something but no matter, all those things played a part in the movie & were not added for the usual Hollywood schlock effect. Movie was called GET LOW & starred Robert Duvall, Bill Murray, & Sissy Spacek. Again I could identify with a few traits the Robert Duval character had. Great acting by everyone & I especially liked the the way sets were lit in this movie.  But 2 movies in a row I actually liked.........amazing. 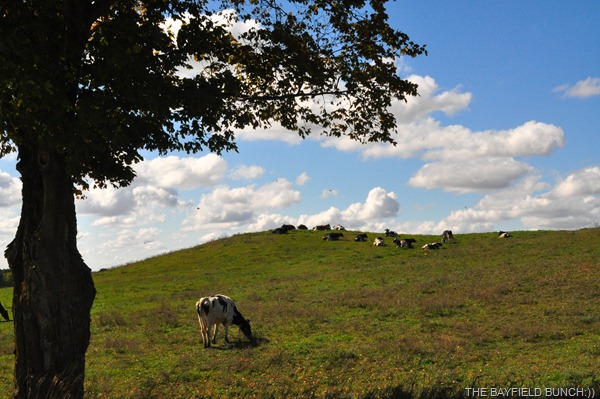 Came across a blog tonight I liked the look of.  Nice photography in an area of the country we love so much.   And I like these folks energetic outdoor hiking spirit, attitude, & sense of adventure.  And besides, ya just gotta love the profile picture of Jim.  Well I’m assuming it’s Jim……….Might just want to keep an eye on these full timing folks & their travels.  LIFE'S LITTLE ADVENTURES. 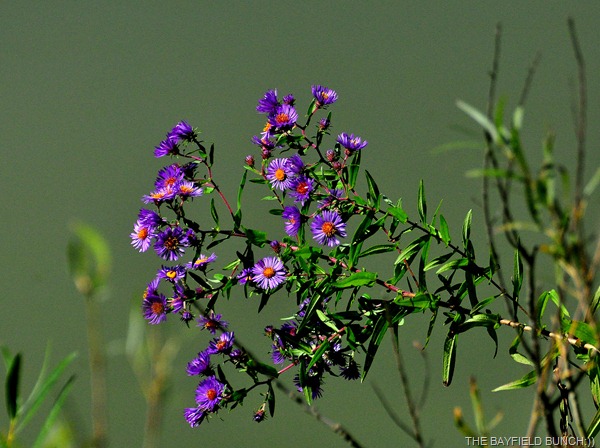 Richard E.Primeau President and CEO of BUFFALO SPRINGFIELD TRANSPORT joined our Blogger's list today. Nice to have you riding along with us when we get ourselves on the road next month Richard. Thanks for dropping by. Appreciate it:)) 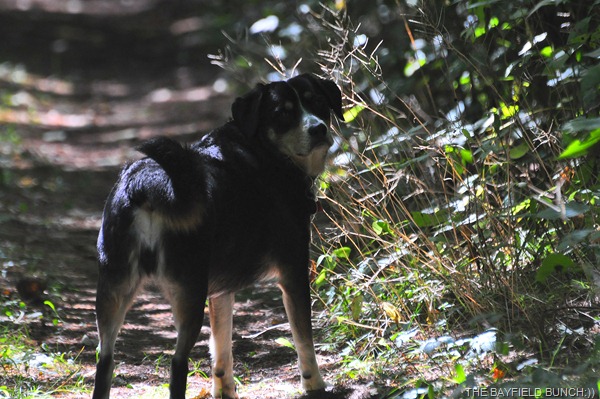 COME ON DAD HOW’S ABOUT WALKING A LITTLE FASTER
And an explanation in Sunday night's comment section about how those Mennonite/Amish buggy wheels have a tendency to wander. MIKE says, "With regards to the crooked wheel path, the buggy wheels do not have the caster set. Think of a shopping cart and how the caster wheel is set a little behind the attachment area to the cart. This makes the wheel follow the front of the cart. When the caster is off, you get a wobble in the wheel and it does not follow straight. 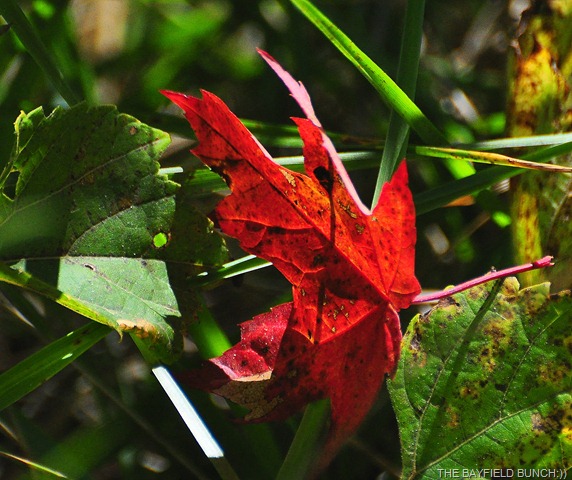 GROANER'S CORNER:((  Murphy's wife borrowed his car and parked in the supermarket car park. Just as she came out laden with shopping, she saw a young lad break into the car, hot wire it and drive off. Naturally she reported the matter to the police.' What did he look like?, the sergeant asked. 'I don't know she replied, but I got the license plate number'.