PHEEBS & I ENDED UP IN THE WILDWOOD CONSERVATION AREA TODAY 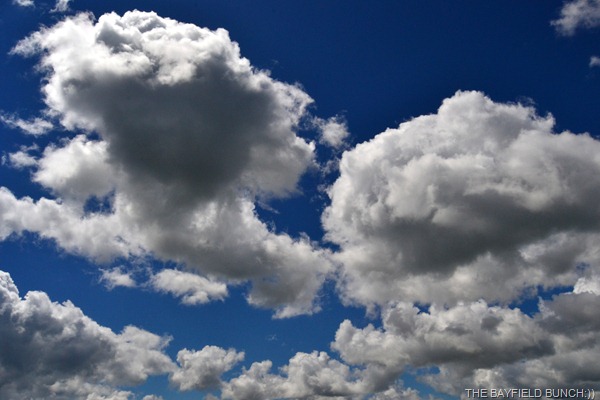 LOVE THESE KINDS OF SKIES

From my recliner each morning it is only the sometimes fleeting colorful wisps of sunrise I see through our thick stand of towering pine trees. Oh how I often wish we had clear views to the east so as to catch each days fiery beginnings. Miss those mountain sunrises, sunsets, & clear night skies we see in our southerly travels each winter. Am so looking forward to getting ourselves back to the great American South West again. 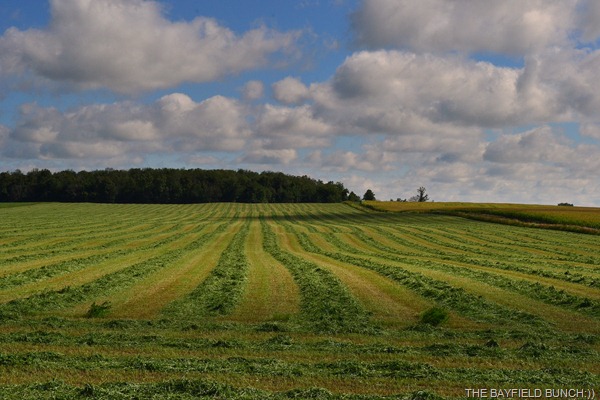 Knew as soon as I saw the first trickle of sunlight spilling through the pine boughs Pheebs & I would be out the door in a couple hours heading off somewhere.  And, we were.  Kelly & Pheebs had to do the morning walk without me again though.  I just can’t go far on my sore foot.  Every time I think it’s beginning to feel better I try a short walk & boom I’m right back where I started.  On the positive side….at least it wasn’t my ankle that twisted or it would have been much worse. 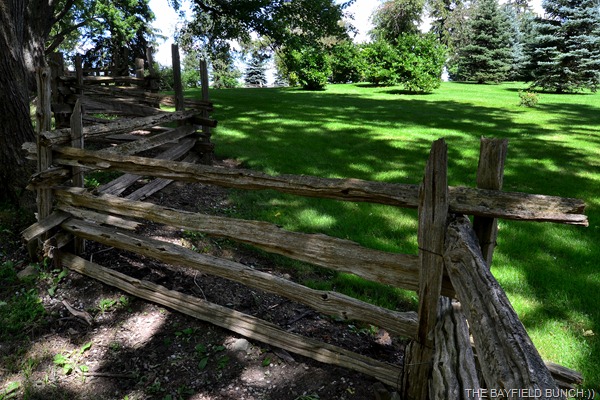 Last week when Kelly had her biopsy I had planned to kill some time that day by wandering around the very familiar Wildwood Conservation Area east of St. Marys Ontario.  Bad weather that day cancelled my plans but I still had Wildwood on my mind.  With that thought in my head Pheebs & I ambled our way in that direction after rolling through Clinton to fill up the Jeeps gas tank & our morning breakfast tummies.  I know I sound like a broken record but it was just another gorgeous morning with those big white magical puffy clouds in the sky.  It is always such a pleasure for me to be out in the countryside.  No traffic, no people, no noise, no problem:)) 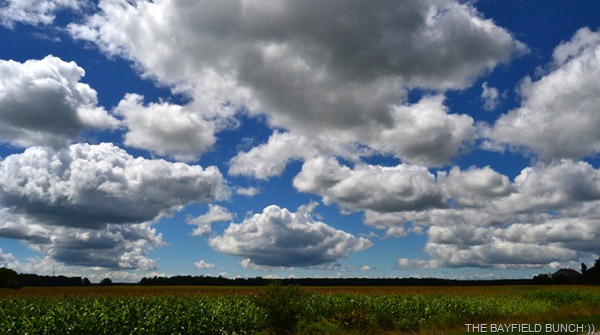 I know the WILDWOOD CONSERVATION AREA & surrounding country side very well having spent a lot of time around there in the mid to late 80’s.  Have hiked every inch of the Wildwood trail & cross country skied much of it as well.  I knew a spot at the end of a road where the trail passed close by & that was our first stop.  Knew Pheebs & I could access Wildwood Lake via a sloping flat footpath.   Chuckled to myself as I recognized & remembered the times I cross country skied this section of trail.  Could always pick up a bit of speed on the skies & end up a crumpled wreck in the snow as the trail made a sharp right hand turn at the bottom. Figured it had probably been close to 20 years since I had last walked this section of trail. Awww, so many great memories of yesteryear for me here in this area.  And all good ones too. 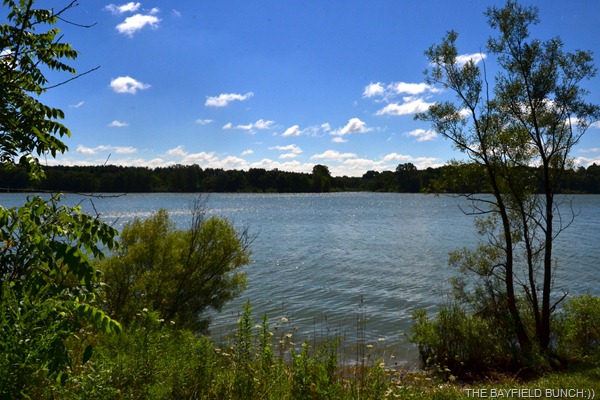 WILDWOOD LAKE IS MAN MADE & HOME TO SAIL & POWER BOATERS PLUS WATER SKIING & WINDSURFERS…TODAY IT WAS PERFECTLY QUIET:)) 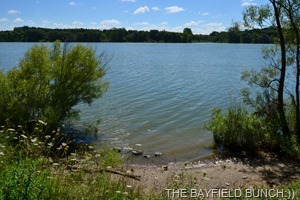 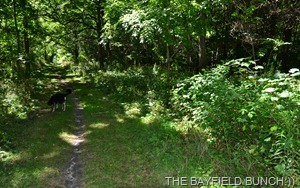 Our next couple of stops were on bridges spanning the lake.  Many the time while living in Stratford I would drive out here on a clear night, park on one of the bridges & just get out & lose myself in the wonderment of so many stars overhead.  I hadn’t learned the Constellations yet but no matter, it was just great to look up & see all those stars overhead & wonder what everything is all about…..& why.  No human sounds around & just the Owls in nearby forests.  Frogs, crickets, & the sounds of an occasional fish jumping somewhere out in the nearby lake.  And then there were those Moonlit nights with the Moon casting it’s long stretching Moonbeams across the placid waters.   Oh how I loved to escape my life in the city during those years. 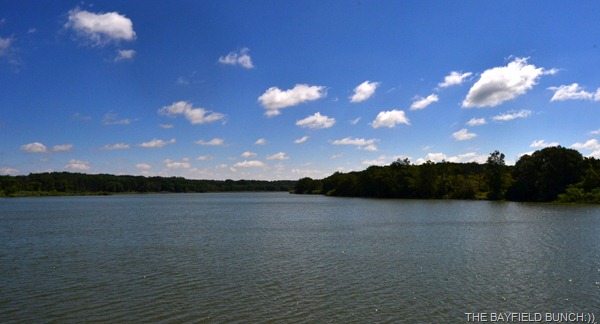 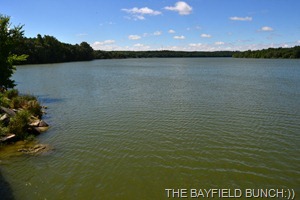 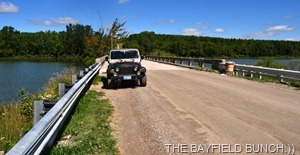 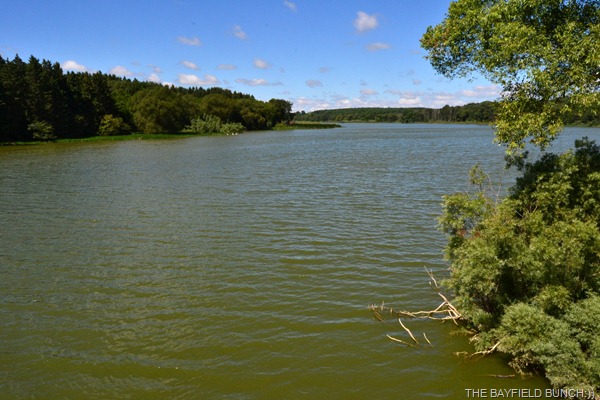 MY 300MM LENS SHOWED ME THEY WERE SWANS

By the time we reached the second bridge I knew I was going to be looking for something.  I always do when I stop at that bridge.  Took a bit of searching with my 7x50 binoculars but by golly there to my surprise it was.  Still standing after all these years.  In the late 80’s I belonged to some clubs in Stratford one of which was the Stratford Field Naturalist Club.  It was decided by the club, in conjunction with the Wildwood Conservation management to construct & place an OSPREY (Fish Hawk) nest along a remote section of the lakes east end.  Myself & 5 other members volunteered to do that & so it was on a crisp Autumn Saturday morning we volunteers plus one fellow from the Conservation management drove as close as we could to the remote area.  We would be transporting all the materials to build that platform about a quarter mile through some pretty heavy duty underbrush.  I had just bought a brand new pair of fleece lined sturdy high rubber duck winter boots.  One of the guys carried a shovel, hammers, & nails, while 2 others carried some plywood & 2x4’s.  The management fellow packed in a chain saw.   Myself & a couple other guys carried a long post the Osprey platform would sit upon.  The lake had just been drained for the winter & our goal was to reach a spit of high ground about 50 feet off shore.  None of us took into consideration the fact that the muddy lake bottom had not had time to dry & firm up.  I was in the lead carrying the front end of the post.  Stepping out of a swatch of waist high grass I was suddenly down & nearly up to my knees in soft lake bottom mud…..& stuck.  We had a bit of time getting me back up out of that mud & I was lucky to retrieve my new boots because the mud just kept trying to suck them right off my feet.  The fleece lining was a mess of course & from that day forth forever smelled like a reeking swamp.  I think when I went anywhere after that people would twitch up their noses saying, geeeezzzz, here comes old Swamp Foot again. 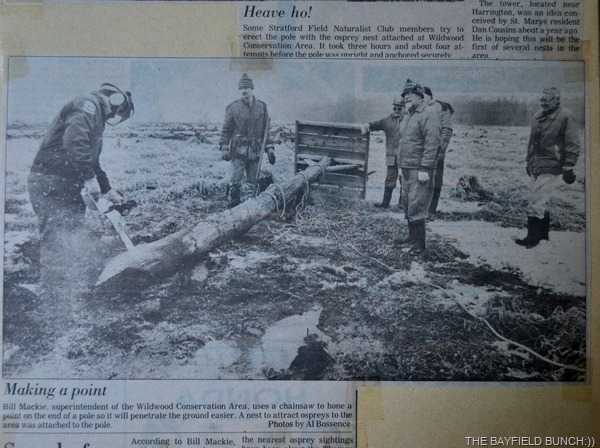 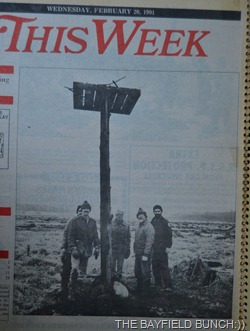 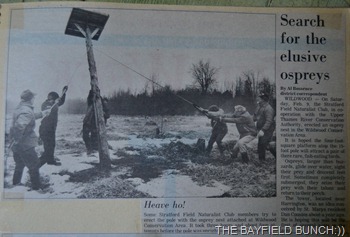 Anyway, despite that little foible in the mud we were successful in getting our Osprey stand materials to a closer spot, assembled, & hoisted up into place.  I had a camera along of course & recorded our mighty feat.  Camera was loaded with 35mm black & white film at the time because I knew our Osprey stand adventure might just end up in the newspaper.  Back in those days my best friend Jim Hagarty was District Editor for the Stratford Beacon Herald.  Aside from sending me out on a few photo assignments occasionally he gave me free reign to take photos of anything in the countryside I found interesting.  I would shoot up a roll & hand it into Jim at the newspaper & many of my photos were published in Jim’s ‘This Week’ farm addition which he would put together each week.  A few times I would do a write up with the photos as well.  Tonight while typing this I remembered a scrap book I kept of my newspaper photos at that time.  Above are a few photos of our Saturday morning Osprey nest adventure.  While I had my scrapbook out tonight I counted up the number of photos I had published in the Beacon Herald’s ‘This Week’ farm addition.  Turns out it was 96 with 12 of those photos making the front page of Jim’s farm addition.  Thanks Jim:)) 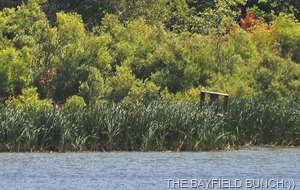 WHEN I ENLARGED TODAY’S OSPREY PHOTOS IN MY EDITING PROGRAM & HAD A CLOSER LOOK I AM NOT SO SURE THAT IS THE SAME OSPREY NEST WE PUT UP…SAME LOCATION SO MAYBE THEY REBUILT OR REPLACED IT…ANYWAY, THAT’S WHERE IT WAS………………..

Back to today………….. After our drive down memory lane around Wildwood Lake Pheebs & I headed into the town of St. Marys for some eats.  It was well after lunch & we had worked ourselves up an appetite.  Amazingly enough I remembered where the ‘Submarine’ shop was across from the high school.  Pheebs waited in the Jeep while I slipped in & ordered us up a 6” Tuna sub with all the fixins.  Back in the Jeep I knew enough to stay put & eat our sub where we sat.  Good thing because we ended up in a bit of a mess again.  The  sauce I had on the sub made it pretty slippery & slidey & we soon had a splotch of Tuna on the steering along with some groovy sub sauce on my clean shirt.  Oozed out some tomatoes & lettuce but Pheebs was quick to clean up that end of our mess dilemma.  I sometimes made a grab for the green peppers but Pheebs usually beat me to it.  She’s pretty fast on her paws. 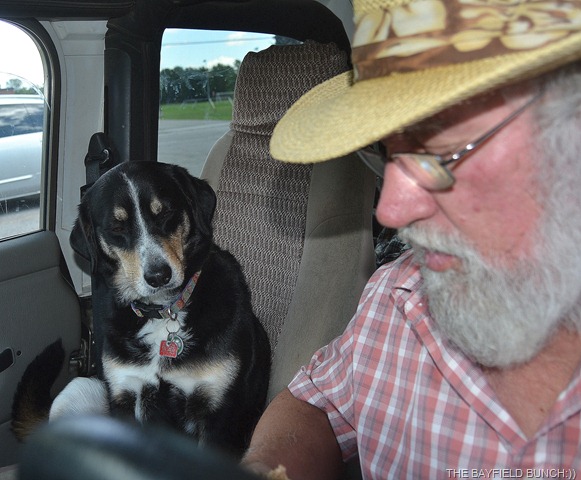 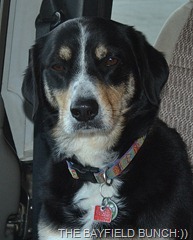 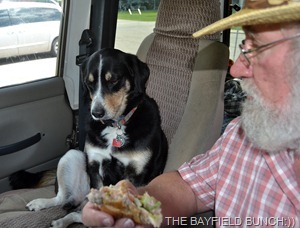 I KNOW YOU WOULD LIKE IT ALL PHEEBS BUT SO WOULD I…..US GUYS JUST GOTS TO SHARE

Following our messy sub debacle we quickly headed out of town for the open countryside & home.  Couple more pit stops along the way for a few pics & we were home by 3.  Todays Jeep adventure had lasted 6 hours.  Nice way to spend some relaxing hours in these sometimes looooooooong days of summer.  Maybe we’ll take the rig for a short run in the morning.  Winnie needs a good outing too…………………….:)) 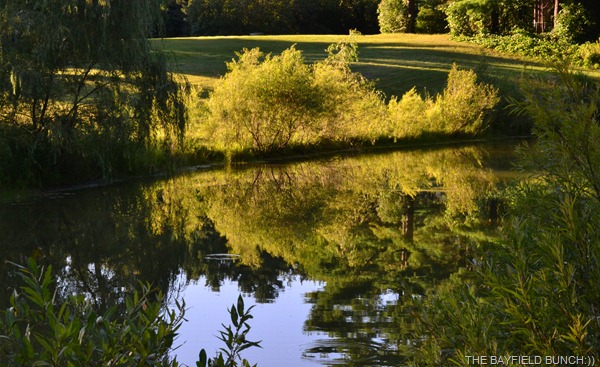 GROANER’S CORNER:((  Bubba and Earl are two avid hunters who got a pilot to take them to Canada to hunt moose. They bagged six.
As they were loading them on the plane to come home, the pilot tells them the plane can only carry four.
The two good old boys objected strongly. "Last year we shot six and the pilot let us put them all on board; he had the same plane as yours."
Reluctantly, the pilot gave in and all six animals were loaded.
Unfortunately, even on full power the little plane couldn't handle the load and went down a few moments after takeoff.
Climbing out of the wreck Bubba asked Earl, "Any idea where we are?"
"Yeah, I think we're pretty close to where we crashed last year."