AL HEADS OFF TO THE VAMPIRE CLINIC THIS MORNING

THIS IS WHAT A ‘DRIVE BY FLOWER BED SHOOTING’ LOOKS LIKE

I was able to walk a little farther this morning but had to turn around at the Goose pond while Pheebs & Kelly continued on. I had a chuckle when I saw Pheebs meet up with her best pal Dexter & both of them made a bee line for the pond. Dexter jumped right in with a big splach but Pheebs would have no part of that getting wet stuff. Needless to say Dexter was in big trouble with his owner when he climbed back out of the pond. 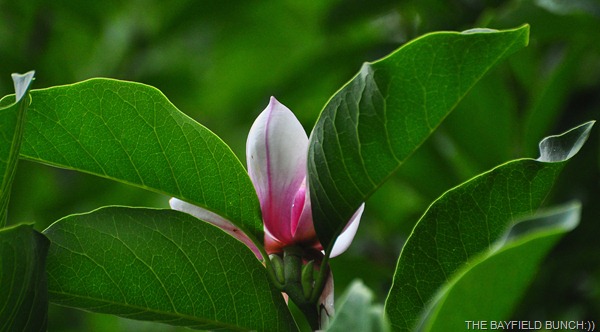 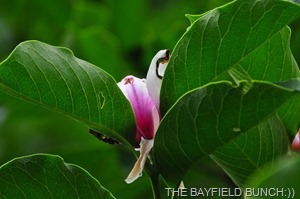 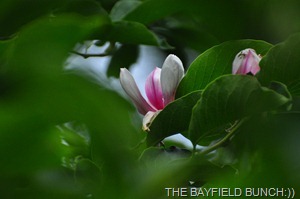 Had a requisition from Doctor Bukala (my kidney stone specialist) in Stratford requesting another blood sample so that meant a trip to the Vampire Clinic in Goderich this morning . My PSA numbers have been slightly elevated this past year & I have another appointment with him on the 27th of this month to talk about that. There is generally a bunch of people awaiting blood work at the Maitland Medical Center so knew I couldn't take my little furry Jeep buddy with me. Didn't want to leave her sitting in the Jeep when I didn't know how long I was going to be. A dozen people in the waiting room with 7 of those ahead of me. My total wait was maybe 25 minutes. My number was 75 so that told me 74 people had already bravely gone before me. Medical waiting rooms are interesting places if one is a people watcher & I have always been a people watcher. There in the waiting room sat the past & the future. To my left a young fella about 30 years younger than me. Good shape & still had his youthful hair color. Looked enthusiastic & appeared interested in his surrounding. Reminded me of my past. To my right an elderly man probably 20 years older than me sat quietly with eyes to the floor. Tall wirily fellow tiredly stooped. A few wisps of white hair left where once a probable full head of hair had once blown freely in a summer's breeze. Skin drawn tightly over a frail frame. He was alone with a distant look in his eyes & his mouth quivered. Reminded me of the future. While at the medical clinic I also made an appointment to see my Nurse Practitioner next week.

From the clinic I headed off to Mr. Submarine for a 6" Tuna Sub on a toasted whole wheat bun. American cheese, lettuce, tomato, green peppers & onions. Sub sauce with a sprinkle of salt & pepper & I was good to go. Still figure that is one of the best food bangs for the buck. All that for under $5. Been eating those 6" Tuna subs for years.  Hey, something fishy about that………………… 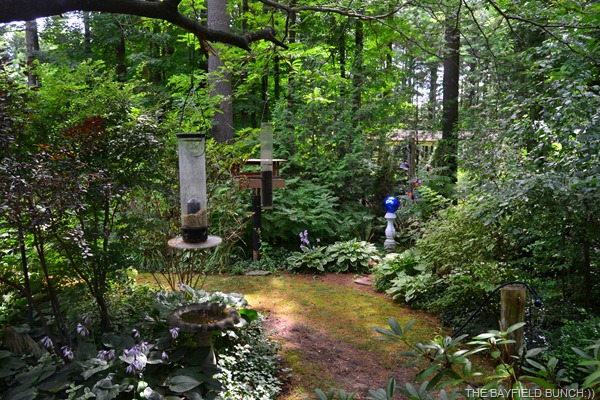 WHERE OH WHERE HAVE ALL OUR LITTLE FRONT YARD BIRDIES GONE

Next stop was the old CPR station down around the harbor again. Wanted to see if I could get a better photo of it putting it's location to the lake in perspective. Had spotted a big pile of dirt on the south side a couple days ago & figured if I could clamber my way up that dirt pile I could get a few photos. Forgot about my sore foot. Gave it a half hearted try but new if I persisted I was only going to hurt myself. Held the camera up in the air overtop a nearby fence & fired off a few shots in the stations general direction. Half an hour later I was home & tiredly tipped back in my recliner. Compared to other years I seem to be doing a lot of napping & resting this summer:((

Kelly is a real action Jackson person when it comes to getting things done. Rather than just accepting her liver diagnosis she has dug her heels in to find out as much about it as she can. Down to her Doctor's office in Bayfield this morning & home again with a handful of up to date Doctor reports. She has all her blood test & procedure numbers, communication info between Doctors, fax copies, & just about everything else related to the history of her condition over the past 4 months. She then goes to the computer & finds out what these numbers & terms mean. Then on the phone to the Goderich hospital to set up her next electrocardiogram. Couple phone calls to Dr. Haffner's office in Stratford with additional questions. Even called the Wickenburg hospital in Wickenburg Arizona this afternoon to see if she could get monthly liver blood tests if we are in Congress. She can & the Wickenburg folks would even fax those results directly to Dr. Haffner's office in Stratford Ontario. As I've said many times before, Kelly has never been one to take things sitting down. When the going get's tough.....Kelly gets going.  Me, I have a habit of slumping into my recliner & holding on for dear life……………….. 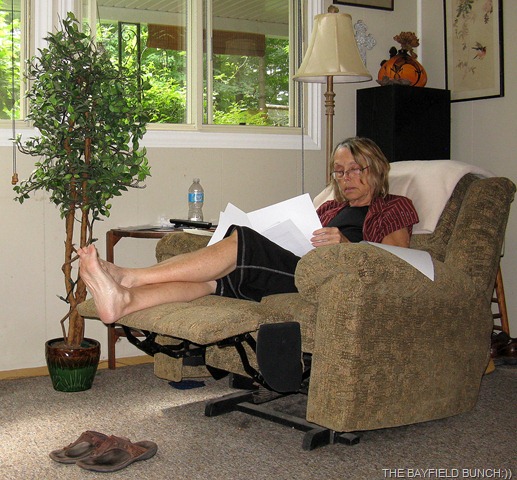 Chinle's back:)) A month ago after reaching a turning point on my blog I had decided it was time to do some housecleaning & make a few changes. I wasn't quite ready to give up my blog yet & I have always found making changes has always worked at keeping my interest peaked awhile longer. My 'Fellow Blogger's list was getting way too long & out dated.  I noticed some folks hadn't blogged for months & other folks I knew to be gone on to other things. One of my favorite Bloggers with a lifestyle unlike many others had packed her blog in quite awhile ago & I didn't think we'd hear from Chinle Miller & the SPOTTED DOG RANCH again. But I was wrong. Happy to say Chinle's back & I quickly reinstated her to my sidebar. I can always relate in some way to what Chinle writes & she expresses herself on a reading level I can understand. Chinle is one of those folks who uses her head to write from her heart. And I like that........................ 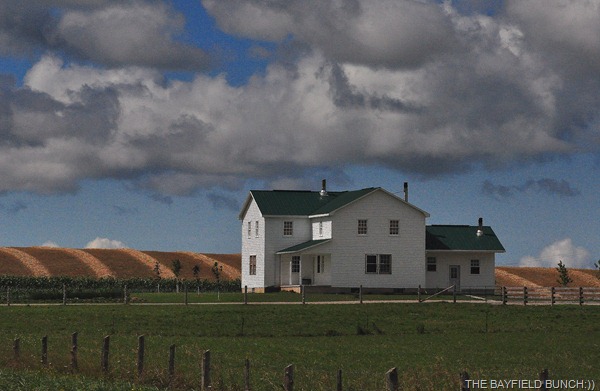 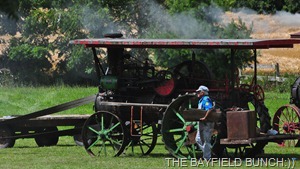 IT’S NOT EVERY FARMER WHO HAS AN AIRPLANE TIED UP ALONGSIDE THE HOUSE, OR AN OLD STEAM ENGINE IN HIS SIDE YARD

While writing the above paragraph & saying, 'she expresses herself on a reading level I can understand' I was reminded of not only my limited vocabulary but my inability to sometimes understand what a writer is sometimes talking about. For me, things have to be written fairly simply. Not the writer's fault of course, it's mine. I just don't read on the same higher level some writers write. Maybe that has something do with my poor education & inability to keep my interest peaked when I run into words, phrases, theories, & philosophies I do not understand. Instead of sticking with a post & trying to understand the writer's thoughts & intentions my impatience & frustrations take over & I’m off like a herd of turtles in a cloud of heifer dust.  Once an avid & rather voracious reader of anything printed it is now a stretch for me to read the time of day on my watch……………… 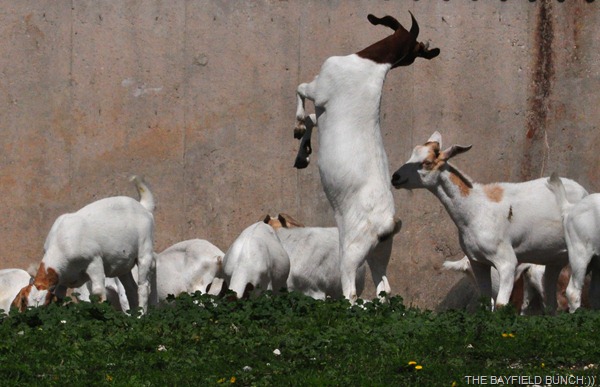 HEY, QUIT GOOSIN ME WILL YA

We are off to the Stratford Hospital in the morning for Kelly's liver biopsy. Going to be a long day they told us……………………. 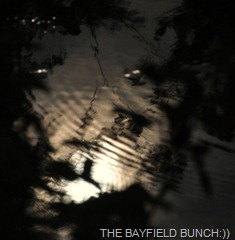 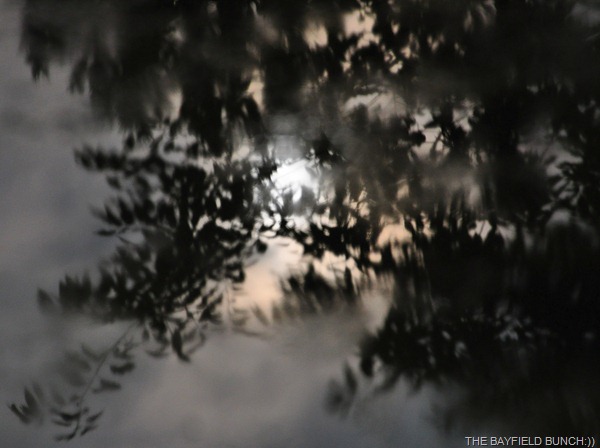 GROANER'S CORNER:(( This is an answering machine message for a school. It came about because they implemented a policy requiring students and parents to be responsible for their children's absences and missing homework. Some parents wanted their children's failing marks changed to passing marks even though those children were absent 15-30 times during the term and did not complete enough schoolwork to pass their various key stages.
Here’s the outgoing message……………………
Hello! You have reached the automated answering service of your school. In order to assist you in connecting to the right member of staff, please listen to all the options before making a selection:
* To lie about why your child is absent - Press 1
* To make excuses for why your child did not do his/her work- Press 2
* To complain about what we do - Press 3
* To swear at staff members - Press 4
* To ask why you didn't get information that was already enclosed in your Newsletter and several other letters posted to you - Press 5
* If you want us to bring up your child - Press 6
* If you want to reach out and touch, slap or hit someone - Press 7
* To request another teacher, for the third time this year - Press 8
* To complain about bus transport - Press 9
* To complain about school lunches - Press 0
LASTLY: If you realize this is the real world and your child must be accountable and responsible for his/her own behaviour, class work, homework and that it's not the teachers' fault for your child's lack of effort, hang up and have a really wonderful day!
If you want this in other languages, tough, you must be in the wrong country. This is America.