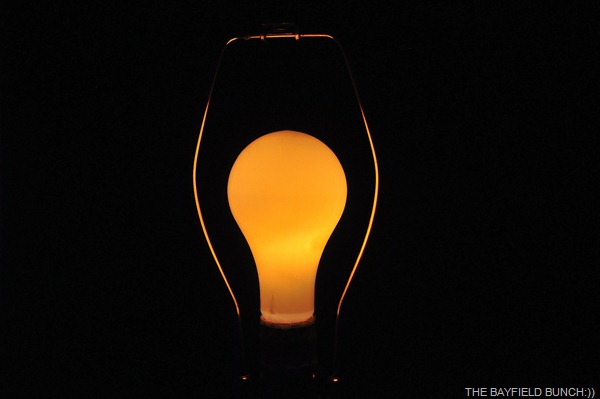 HAD HOPED TO HAVE A SUPERMOON SHOT IN THIS SLOT TONIGHT BUT DUE TO THE HEAVY HUMIDITY THE MOON WAS WRAPPED IN A MURKY ATMOSPHERIC HAZE SO JUST  TOOK A PICTURE OF A LIGHT BULB WHEN PHEEBS & RETURNED HOME ABOUT 10…I ALSO MADE A COUPLE MISTAKES IN MY ISO & EXPOSURE SETTINGS WHICH DIDN’T HELP EITHER…………:((
Shortly after publishing ‘Saturday night's post’ Pheebs & I were out the door & on down the road headed about 3 miles northeast to a hilltop location in the country. Figured we might catch us June's big Supermoon rising up over the landscape. Didn't have my timing quite right I guess plus with the days high humidity the air was hazy & we had a cloud cover. Scanned the horizon, fought off a ka-zillion bugs, & waited about 20 minutes. No Moon, & not even a glow on the horizon so it was back home we went. Did see the Moon a couple hours later through our pine trees but it was hazy behind the clouds & soon disappeared altogether. 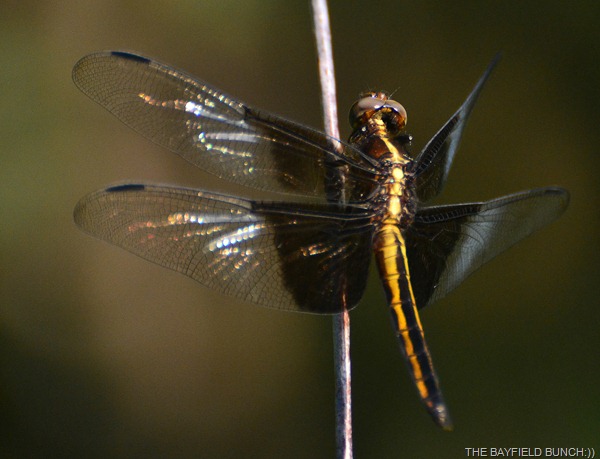 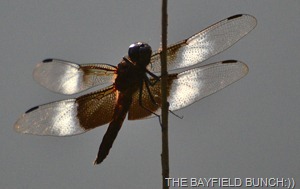 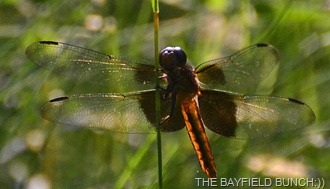 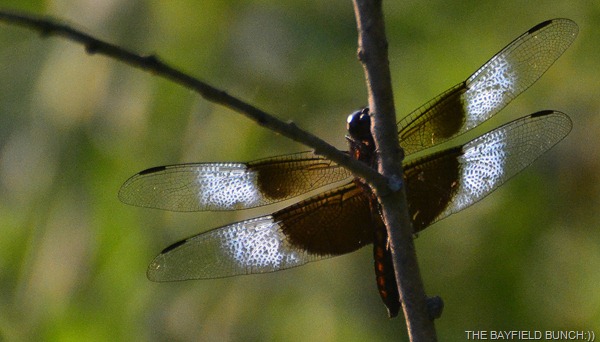 LOTS OF THESE LITTLE FELLERS AROUND THE GOOSE POND THIS EVENING
I am probably like many folks when it comes to making decisions. Some come quickly & others seem to take forever. One difference for me from other folks may be in my haste to act on a decision once it has been made. I can waffle along on something for days, weeks, & months but once that ‘OK’ green light comes on in my head it's pedal to the metal to kick that decision into action. Action now, not tomorrow or a week or two from now…………...Now!! 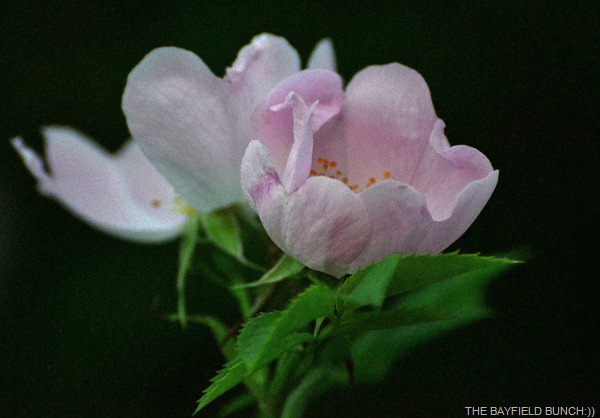 And so it was with my very long drawn out decision to replace my aging & sensor problematic Nikon D40 camera body. A few posts ago I included an unedited photo showing the problem I have with dirt on the camera's sensors. It's an expensive fix. Kind of like pouring money down the drain on an aging car. I have spent a lot of time these past few years retouching countless numbers of photos & I think it was the fact I posted about the problem a few days ago that I woke up this morning knowing not only what I wanted to do, but what I had to do, & just exactly what I was going to do.  And there was absolutely no point putting it off till tomorrow, the next day or maybe next week. No, if I am going get a D3100 camera body I am going to get it.....TODAY!! 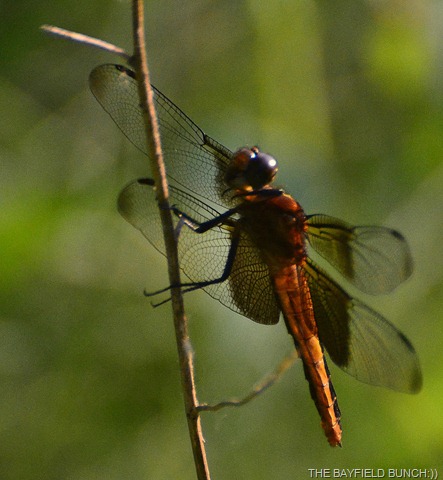 Checked on-line prices & surprisingly saw HENRY'S CAMERA STORE chain had new Nikon D3100 bodies for $349. ADORAMA'S refurbished D3100 bodies were the same price so without further ado I was off to London Ontario this morning. Henry's camera store opened at 12 noon & AL was there at 12:06. It's an hour's drive to London’s Masonville Mall & a smart person would have waited until noon, then phoned Henry’s to make sure they had that cameral body in stock. But my logic told me if I phoned & they didn't have one in then what would I do for the rest of the day. So at 11 a.m. my impatience pushed me out the door & headed me for London. Heat & humidity were bad so I left the little Skeeziks at home in our cool air conditioning. No A/C in the Jeep so it was a hot trip to London & back. Highways all the way there & country roads on the way back.  My time in & out of the camera store……20 minutes.  Should explain that DSLR cameras are actually made up of two parts.  The camera body & the lens.  Each can be bought separately or together.  I already have a lens to fit the new camera so I did not need a second lens the same.  Hence, I only needed the camera body itself. 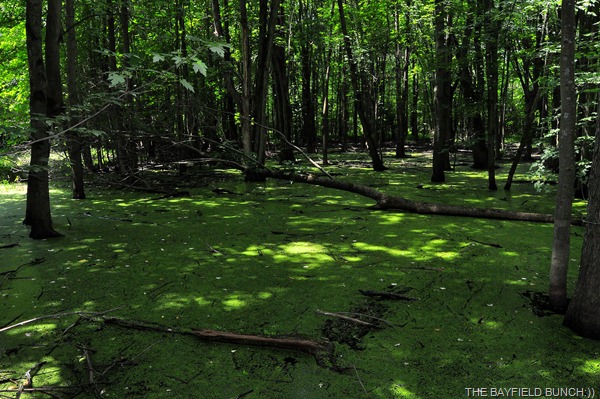 I THINK THERE MIGHT BE SOME ONTARIO ALLIMAGATORS IN HERE 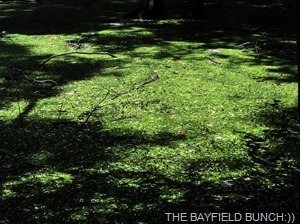 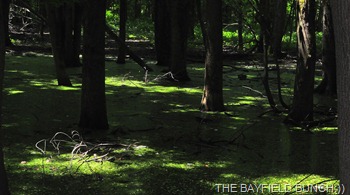 JEEPED OUR WAY HOME THROUGH AN OOBLY GOOBLY SWAMP THIS AFTERNOON
A D3100 is not a top of the line Nikon camera. It's referred to as an entry level camera & that's all I wanted or needed to replace my D40. First, the price was right for me & second I didn't want one of the larger & heavier bodied Nikons. My cameras travel around my neck & shoulders when I'm hiking or walking & weight is an important factor. Also I do not need all the bells, whistles, waazles, & woozles that come with todays camera technologies. For me at this stage it is better to keep things simple. I sometimes think people pay way too much attention to, & get all wrapped up in camera technologies when they should be nailing down some good old standard basics of photography.  Invest some of that waazle woozle money in some good photography classes.  Just my opinion of course.  If I was a professional photographer or used my cameras commercially or for business, etc then maybe I would have to get into all that new waaz wooz stuff to compete. But then it wouldn't be a hobby anymore & the enjoyment would be out of it for me. I did experience a bit of the business side of photography back in the old 35mm days & it was one of the reasons I packed all my camera gear away one day & never touched it again for years. Anyway, my photos only appear in my blog now so no stress & it keeps things on an even keel.  And you probably will not see any difference in my pics with the new cam but I will sure notice a big difference at my end when I do not have to re-touch all the dust spots out of nearly every photo my D40 was taking.  Geeeezzzz, what am I gonna do with all my spare time now eh……………………………. 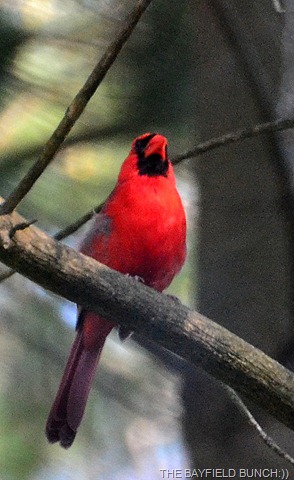 <<< ONE OF MY FIRST D3100 TEST PHOTOS TAKEN THROUGH OUR LIVING ROOM WINDOW
And today another Blog Follower.  RICK DORR has climbed aboard so a warm welcome to Rick for stopping by & finding enough interest here to jump through & over all Google’s entanglement of hoops & barrels to join us on our travels.  Whenever it is we can get back to traveling again that is.
---
And Monday morning at 9 a.m. we have to be at the Stratford General Hospital to meet with Kelly’s Specialist regarding what is going on inside her chest.  She is much improved from 3 weeks ago but is still bothered with chest pains, shortness of breath, & tiredness.  We are hoping they will have pin pointed something so she can begin some kind of treatment to make things right again. 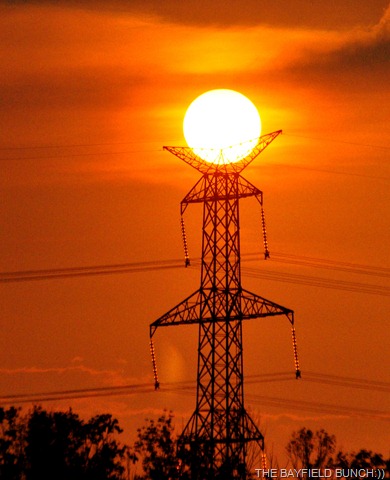 GROANER’S CORNER:((
A couple in their nineties are both having some short term memory loss. While in for a check-up, the physician says that physically they’re okay, but since they’re having trouble remembering things, they might want to start writing things down.
Later that evening they’re sitting and reading, when the husband gets up.
“Would you like anything from the kitchen?” he asks.
“Some vanilla ice cream,” his wife replies.
“Okay.”
“Shouldn’t you write it down so you don’t forget it?” she asks.
“Don’t worry, I won’t forget.”
“Well,” she says. “A few raspberries on top would be great. You want to write that down?”
“I’ve got it, honey. A bowl of vanilla ice cream with raspberries on top.”
“And chocolate sauce, too. Maybe you’ll forget that. Want me to write it down for you?”
A little miffed, he replies, “I’ve got it! Ice cream, raspberries and chocolate sauce. I don’t need it written down, for gosh sakes!”
He waddles out to the the kitchen. A half hour later, he comes back with a plate of ham and scrambled eggs, and gives it to his wife.
She looks at the plate a few seconds, then says, “You forgot my toast.”