“OH OH” JUST FOUND OUT A GROWING 1,500+ ACRE FOREST FIRE IS WITHIN ABOUT 20 MILES OF OUR CONGRESS ARIZONA HOUSE!! 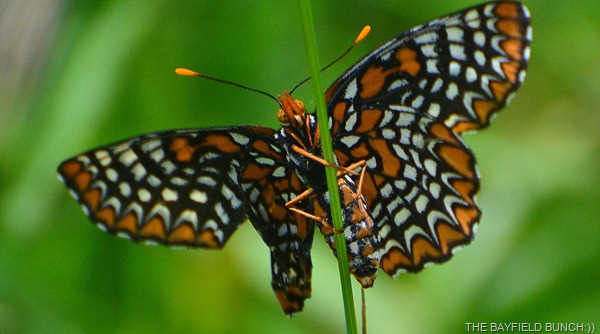 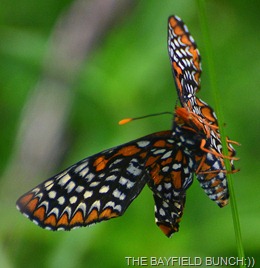 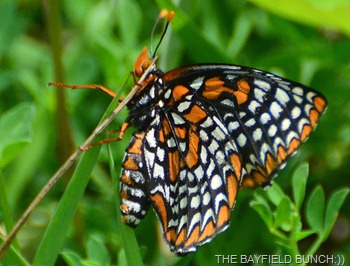 AT THE HULLETT MARSH SATURDAY & GUESSING THIS LITTLE FELLOW MIGHT BE A BALTIMORE CHECKERSPOT
Again, a nice cool morning so took advantage of that to trim our Basswood tree plus a neighbor's Magnolia tree & some Lilacs. No bugs for a couple hours so it was nice to get a few outside things done without being annoyed, irritated, or pestered. 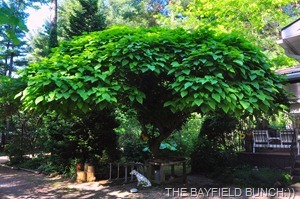 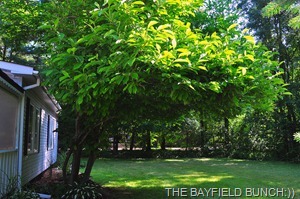 OUR BASSWOOD TREE & OUR NEIGHBOR’S MAGNOLIA 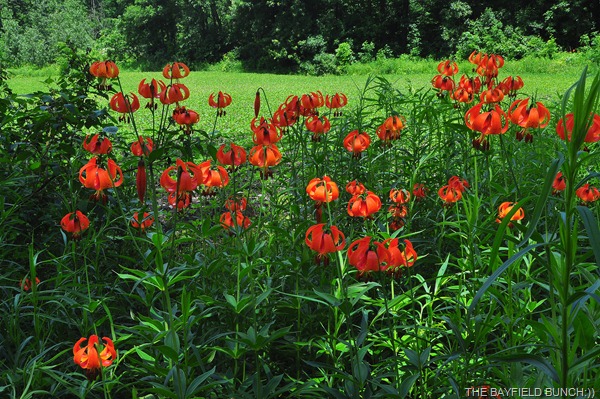 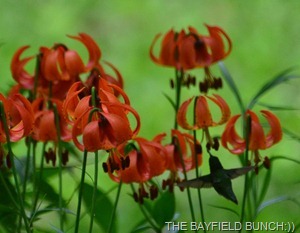 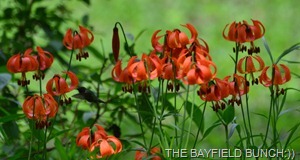 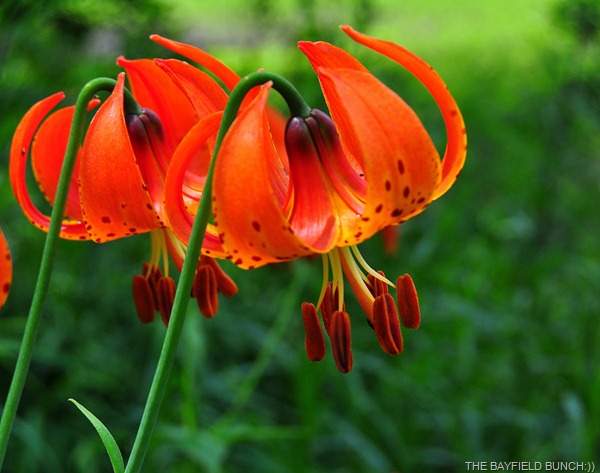 I'm afraid my poor Motorcycle has spent most of it's time sitting around in the carport collecting dust again this year. Wished I could recapture the excitement I always had in the early days of riding but it just isn't there anymore. Once I do get the bike out heading down the road I do enjoy the ride but it's just getting myself into Motorcycle mode is where I run into problems. Each Spring I think to myself 'this is it, I'm going to spend the summer on my motorcycle'. But it just never seems to happen. I've never had a desire to ride with other bikers & my enjoyment has always come from my solitary journeys around the local countryside but often as not I take the Jeep now.  And yet I know if I sold the bike it's not very likely I would ever have another one at this stage of the game. It's just that $45 a month 12 months a year for insurance that bugs me. Oh well the less I drive it the less I will have to spend on maintenance & repairs and of course………….the longer I can keep it:)) 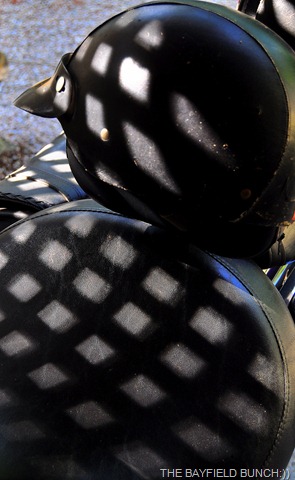 Now, having written the above paragraph earlier this morning I did jump on the bike later this morning & head on up to Walmart in Goderich for a few things. Nearly pulled the same dumb stunt I did last year when I dropped into the Supermarket & bought too much stuff to fit in my saddlebags. Seems as soon as I park the bike, turn my back on it & walk away, I totally forget I even brought the bike. Lucky break this morning as I stood in the Pet Department mulling over whether to buy a big 50kg bag of birdseed or not. No thought whatsoever that I had just brought the bike & would have no way of carrying a big heavy bag of birdseed back to Bayfield. Decided on a smaller bag simply because I didn't want to have any birdseed left over at the end of the season & the feeding frenzy will probably begin to slow down a bit soon. As it was I was still pushed a bit for space stuffing in the smaller bag of birdseed, 2 litres of milk, a pkg of flat bread, & a tub of honey into the right side saddlebag.  Yep, I get a tad discouraged with myself sometimes when I make those short term memory mistakes. 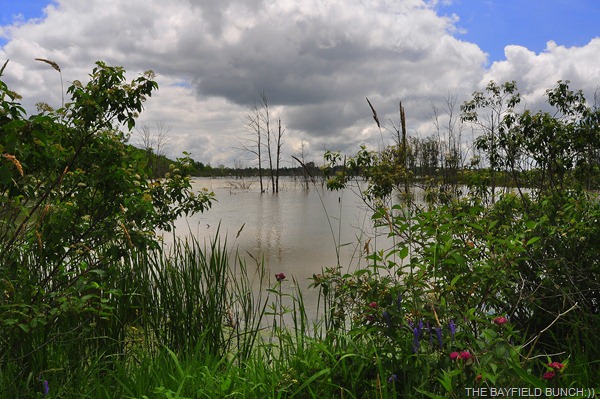 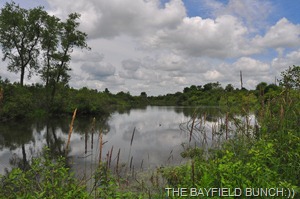 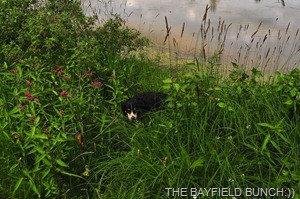 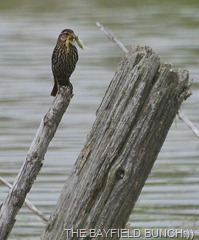 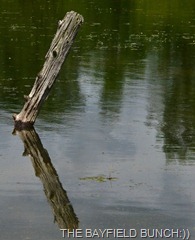 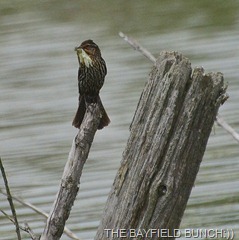 HULLETT MARSH…WE ARE FORTUNATE TO HAVE THIS LARGE WILDLIFE REFUGE CLOSE TO US & I HAVE BEEN HIKING SLOSHING AROUND IN HERE SINCE THE LATE 80’S
The learning curve on my new NIKON D3100 has been gentle. A few auto focus issues I have to adjust to but other than that I have been able to understand things & with a little trial & error shooting I am getting the minor bugs worked out. Not that the camera has any bugs of course but it's operator does have a few resident cobwebs that do get in the way of the learning process from time to time. If you have been confused by all that Megapixel, ISO, Resolution gobble be sure to click on the above D3100 link & read Ken Rockwell’s no nonsense take on some of that techno stuff. He also gives you his expert & unbiased opinion on what he considers the best types of cameras & lenses to buy. He discusses both Nikon & Canon as well as all the other brands. 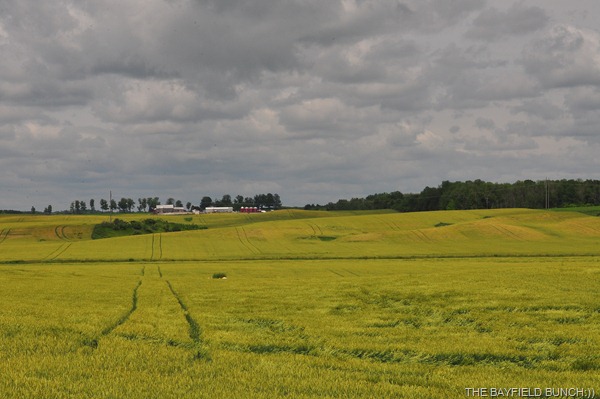 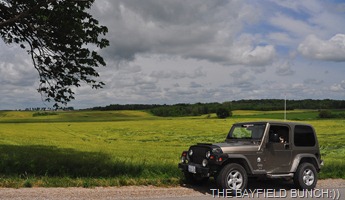 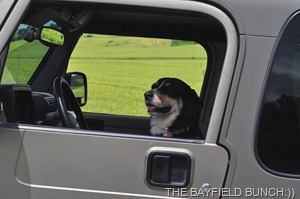 PARKED ON A HILL SATURDAY PHEEBS HOLDS THE EMERGENCY BRAKE ON WITH HER PAW:))
Hey George, here’s the info on that house & property for sale a few minutes southeast of Exeter Ontario…..HOUSE FOR SALE.  The house sits about 40-50’ from the highway.  Some places you get a feel for & some you don’t.  For me, this place regardless of price & without even getting out of the Jeep, was a definite ‘don’t’.

I THINK ONE OF OUR FRONT YARD BLUE JAYS IS MISSING A FEATHER
“OH OH” just found out tonight we have a forest fire raging close to our Congress Arizona house.  I’m guessing maybe 20 miles or less if it’s coming down the Yarnell Hill.  Check out this YARNELL FIRE LINK.   Thanks for posting that on Facebook Mike.  Kelly just noticed it.  Got ya another windmill big guy.  It’s in my Saturday post:)) 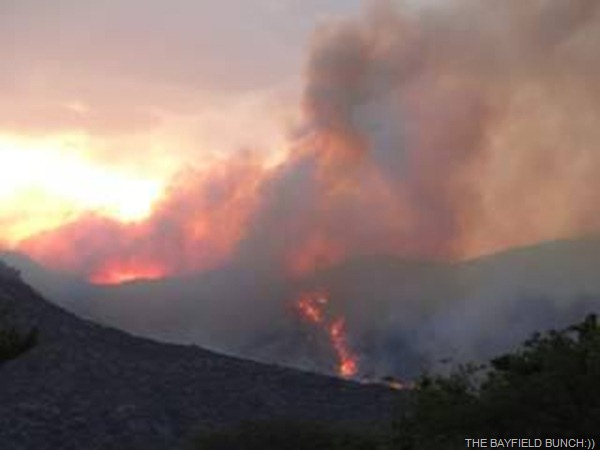