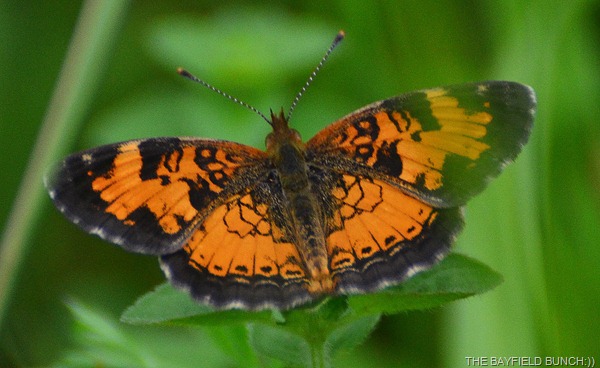 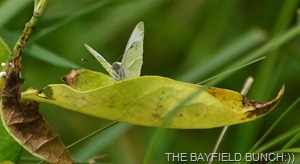 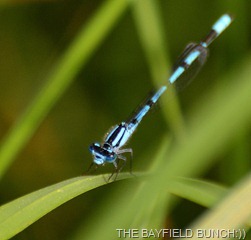 By a sheer stroke of good luck our Hyundai Santa Fe's A/C broke down just in the nick of time a few days ago. Had it not done so we may very well have been in for a blown engine. A few days ago Kelly said she thought the Santa Fe sounded a little louder & different somehow. I assumed it was probably the muffler starting to go & never thought any more about. I didn't go out, start the car & have a listen for myself. The air conditioning in the car had quit late last week so Kelly phoned & made an appointment with the BAYFIELD GARAGE to have the A/C looked at this morning. She took the car in before 8 & I followed in the Jeep. Left the car at the garage & headed home. 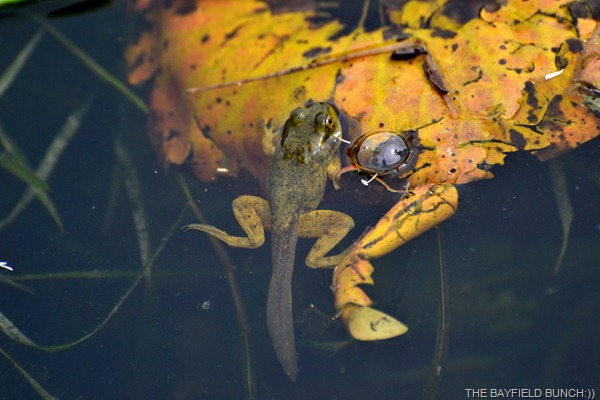 THIS LITTLE FROGGY FELLOW STILL HAS HIS TADPOLE TAIL 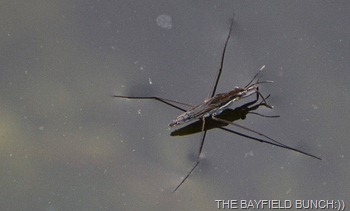 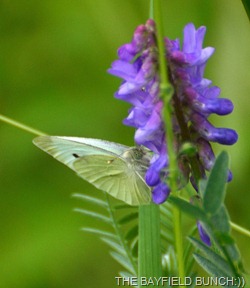 Couple hours later we had a phone call from the Bayfield Garage. Figured the Santa Fe was done. Nope, bad news. And good news at the same time. First, the bad news. Soon as Don at the Bayfield Garage started the Santa Fe he immediately knew there was a serious engine problem. Shut it down quick & never attempted to start it again. A closer inspection revealed the timing belt assembly with only a few gears left on something was on the verge of flying apart. They didn't know how Kelly even drove the car in. Apparently had that assembly come apart it could have permanently damaged the engine. Good news the problem was discovered when it was. Bad news is the $400+ unexpected repair bill we are facing now. And that wasn't the end of the bad news but at least the car will be fixed up & ready to go sometime Thursday. 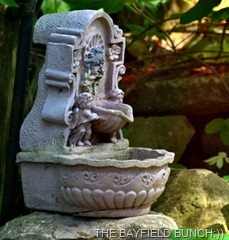 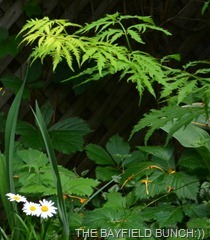 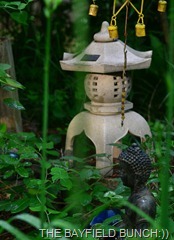 We had hoped the Santa Fe's A/C problem was low coolant & it would be as simple as topping it up with fluid. Nope. Turns out the clutch assembly on the compressor was shot.  It’s a $700+ fix we decided not to go ahead with. The Santa Fe is 10 years old. With the necessary timing belt repair we decided the dozen or so humid days we have each summer just doesn't justify spending money on the Santa Fe’s A/C repair. Especially when the car is not being used every day anymore. If push came to shove & it was an unbearably hot humid day we can always take the Winnie Wagon anywhere if need be. Both dash & coach A/C work just fine in there. All & all the bottom line is that despite the Santa Fe's timing belt repair cost at least the engine wasn't wrecked & that ended our day on a positive good news note. 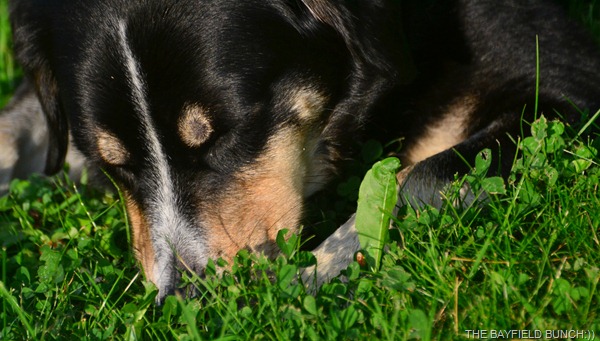 SSSSHHHHHHH, PUPPY IS HAVING AN AFTERNOON SNOOZE

Sun was out full force today so that brought our heat & humidity levels back up resulting in another inside day. I suppose there is a positive side to that as well in that my sore leg/hip has been getting a lot of rest & has not been bothering me like it had. Only used my cane a couple hours to get around in the past two weeks. But I do think my days of doing THE TWIST, the Limbo Rock, the WAH-WATUSI, & the Boogaloo are over. Well if I know what's good for me that is.  And of course all this sitting around inactivity isn’t doing anything to help my weight problem either:(( 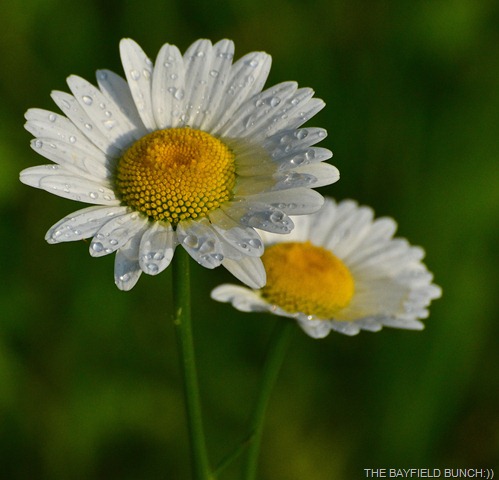 Wondering if anyone has tried out that new OUTLOOK.COM.  Noticed it in our in-box Tuesday. I think it is replacing Hotmail or something. We happen to use Hotmail a fair bit & I would hate to transition a familiar email account to something radically different again. I know we will have to do it sooner or later but just wondered if anyone has made that Hotmail to Outlook transfer & what they thought about it. 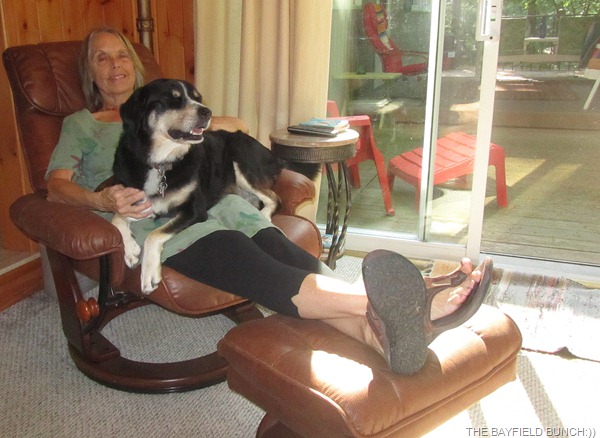 JUST HANGIN OUT IN THE SUNROOM THIS MORNING

Thoughts & even memories of our winters in the South-West over the years seem so far away right now.  Almost hard to comprehend we actually have a house & an acre of land in Arizona.  But the same thing happens when we are down there.  Ontario & our life here in Bayfield always drifts out of our minds & becomes a hazy memory as we take on our totally different South-West lifestyle.  And so different it is too.  I have posted many times my thoughts on how much I love the South-West.  When I reach into my mind & press the ‘best memories’ button for the past 7 years it is always our travels south that fill the giant screen.  Places we’ve been, things we’ve seen.  The mountains, the valleys, & the canyons.  Sunrises & Sunsets.  Those beautifully quiet & sweeping landscapes.  The glittering diamonds scattered across a pitch black night sky.  Campfires & those beautiful boondocking spots we always seem to find.  No human sounds anywhere, just the lonesome wail of the Coyotes & desert winds whispering through tall giant Cactus arms.  The hikes, the rock scrambles.  And I so much love our daily morning desert walks. There is something spiritual about the desert & I feel it every time we are there.  It’s like a calling, a beckoning, a welcoming.  I can feel it growing inside each year as our annual southern journey swings us ever further westward.  I can feel it inside as we first catch sight of mountain ranges ever so slowly looming up out of a hazy horizon.  And then it is into, up, & over the mountains & down the other side.  It is here where the transition firmly takes hold & ever so peacefully slides me into the type of lifestyle I so much love.  And it is here right now where I have to wrap up this post before I get myself downright depressed.  Next thing I know I’ll be out in the driveway loading up the Winnie Wagon.  Maybe tomorrow night I will tell you a few more reasons why we, & especially me, like the great American South-West so much.  Maybe, just maybe……..:)) 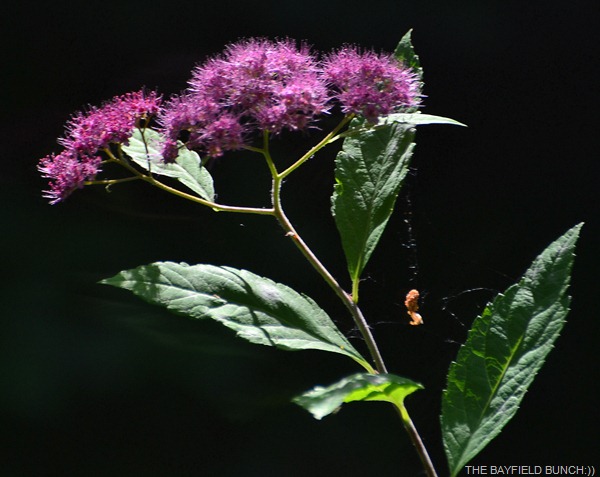 OUTSIDE OUR SUNROOM WINDOW TODAY

GROANER'S CORNER:((  A young Grandson asked his Grandfather how old he was, and the Grandpa teasingly replied, "Well, I'm not exactly sure how old I am."
The little boy advised, "You have to look in your underwear, Grandpa.  Mine says I'm 4 to 6."