COLDWATER MICHIGAN TO BAYFIELD ONTARIO & SOME ‘AWWWWW NUTS’ THOUGHTS AT THE BORDER……….. 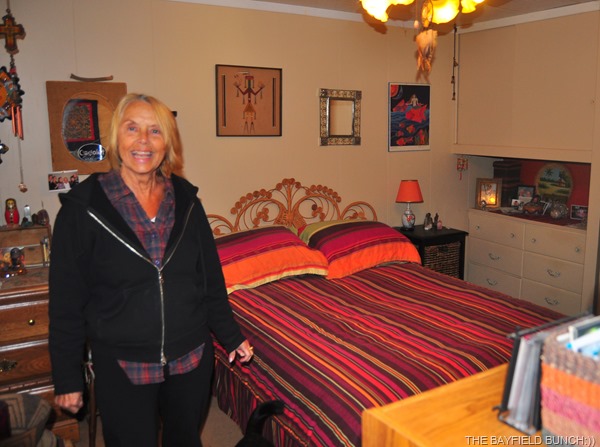 Easy to tell we were further north Sunday night.  Had to crank up the rig’s furnace.  A nice advantage of our small Sunseeker’s size is the fact it’s basically one small room & warms up very fast thus not using much propane.  Bonus.

By 5:10 a.m. this morning Coldwater Michigan was fast fading in our rear view mirror as we headed east for the border.  It was a 3 hour drive & I was glad to see a band of clouds sitting on the horizon.  That simply meant we would not be driving right into a blinding sunrise.  We’ve run into that problem before on this stretch of Interstate with old Sol sitting right on the road.

We reached the U.S. side of the border at 8:35 a.m.  With the border office opening at 8 we had figured it best not to be there right at 8.  A good idea to let the border staff get a couple good jolts of Monday morning coffee under their belts first.  And, as it turns out, it’s a good thing we did!!

Now, you would think with all the agonized worrying I have been doing over this whole importing of the Sunseeker from the U.S. to Canada, & after all the glitches, stumbles, border stress, fretting about being detained forever, put in shackles, & all the rest of it…….the border guards could have had the decency to give us at least a good 15 minutes of their most miserable time ever.  But, oh no……they were all as nice as nice could be.  Well, except for the guy who warned Kelly to ‘step back’ because I think he thought she was going to blow him up!!  Ok, to explain……………

We crossed at the Port Huron/Sarnia border crossing.  As we approached the first line of border check booths at 8:40 we pulled off the road onto a concrete shoulder on the right side.  Nowhere did any sign tell us where to go when ‘importing’ a vehicle.  We saw a brick building to our left so Kelly grabbed her papers & quickly crossed the road dodging lite border traffic & headed for the building.  Outside the building was a man in an elevated booth.  Kelly approached the booth to ask for directions & the man quickly put up his hand & hollered, “do not come any closer Ma’am”!!  Maybe he thought she was a terrorist.  Kelly was able to get some directions out of him anyway despite her threatening presence & about 10 minutes later came out of the brick building with a smile on her face.  This building was U.S. customs where one has to let them know one is ‘Exporting’ a vehicle out of the United States.  That went off without a hitch & Kelly said the man was really nice.  Ok, now comes the part where everything goes into the dumpster, right?

Over the big steel girder Blue Water bridge we go with great views all around.  The vastness of Lake Huron on the left & the St. Claire River stretching away to the right.  We get ourselves into the RV Lane & pick a border inspection booth ahead.  Hope we get a border person with a good Monday morning attitude.   We did.  Young fella who, despite the usual fumbles on my part answering questions, had some smiles for us & a double take on the great price we paid for our Sunseeker.  He instructed us to pull over to a nearby building & park under a canopy.  Border staff were there to meet us.  Now, here’s the best part, for me that is….I got to stay in the rig with Pheebs while Kelly went inside the building to do the paper work for ‘Importing’ a vehicle to Canada.  Twenty minutes later she was climbing in the passenger door with an even bigger smile on her face.  It was all done & Kelly said the lady inside could not have been any nicer or more helpful.  It’s not fair I tell ya…..after all my grumbling, worrying, complaining, fretting, speculating, predicting, etc. etc. etc. & then everything goes off without a hitch.  ‘Awwwww nuts’ it’s just not fair to us grumbling folks I tell ya!! 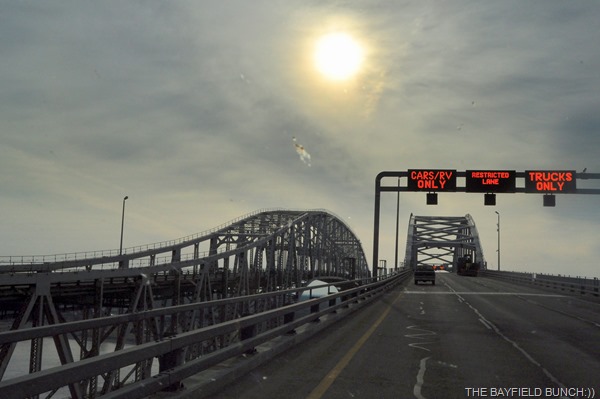 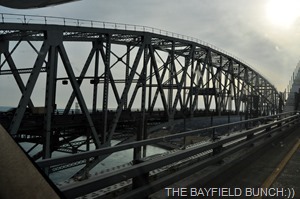 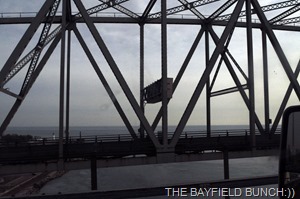 LAKE HURON STRETCHES LIKE AN OPEN SEA TO THE NORTH

Within minutes of leaving the border inspection area at 9:20 we knew we were back in Canada.  Even with our eyes closed we always know.  How?  Smooth roads:))  From the time we arrived at the border until the time we left the border spanned about 40 minutes.  Who would have ever thunk it would have gone so smooth eh.  Hint….Kelly did her homework:))

BACK TO THE FLAT LANDS OF ONTARIO

We were on the homeward leg of our journey & half an hour later we were at a Tim Hortons coffee shop in Forest Ontario for our annual coffee & donuts to go.  Ohhhhh, what a great feeling that was.  And what a great feeling making that final 45 minute drive home to Bayfield.  Home is always home no matter where you go & we are lucky enough to have two of them.  But Bayfield is home-home. 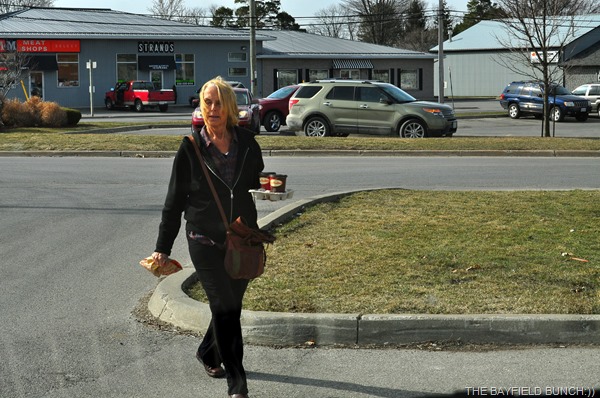 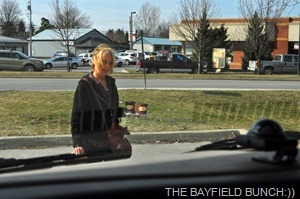 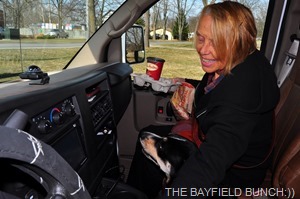 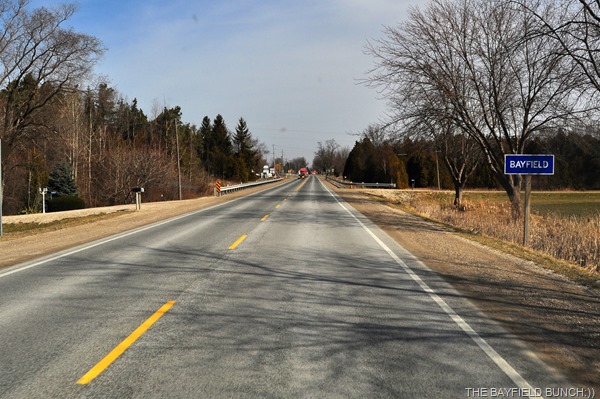 ROLLING INTO THE SOUTH END OF BAYFIELD AT 10:45 THIS MORNING

We always stop on ClanGregor square in Bayfield & unhook our Jeep before driving the final couple miles to our place just outside of town.  Just a little easier doing it that way. 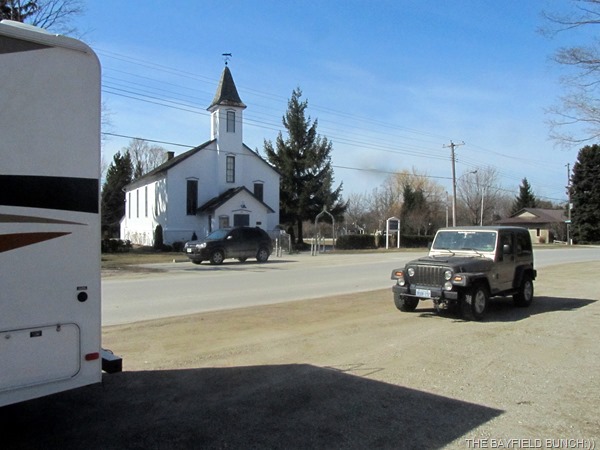 Pheebs went absolutely Bonkers as soon as she jumped out of the Sunseeker & saw where she was.  She raced around & around & around about a hundred miles an hour.  She was so totally excited & happy the long journey was over & she was home.  She could hardly contain herself as she ripped back & forth up the driveway, down the driveway, into the back yard, into the front yard, & upside down around the side yard.  Pheebs & I even made it out for a trip around the pine forest trail later. 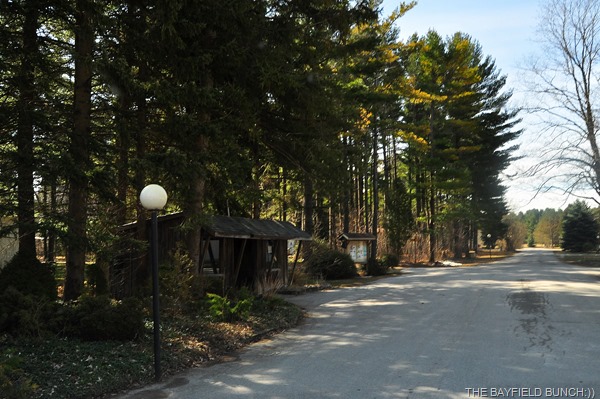 ENTRANCE TO OUR PARK WITH OUR MAIL ROOM ON THE LEFT 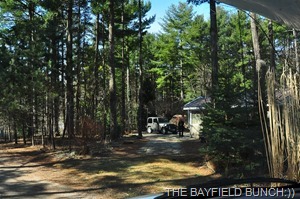 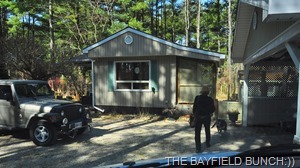 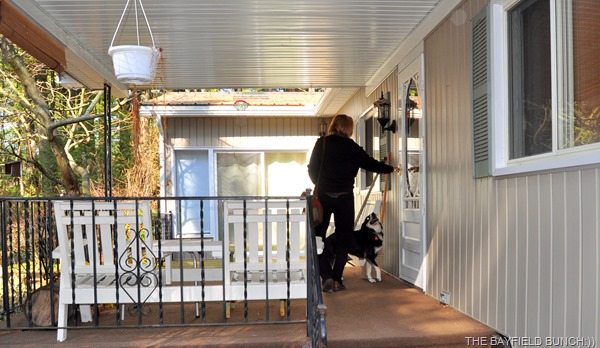 More thoughts on returning home, our hurried trip, Congress, how the Sunseeker performed, & our busy agenda ahead in the coming days & weeks but for tonight it’s time to just kick back in my favorite recliner & grab a few hours of unconscious time.  In the morning we kick things into high gear again as we hook up the utility trailer & quickly head for Mitchell Ontario between gathering rain fronts to clean out Uncle Harry’s room.  For the next while there just isn’t going to be enough hours in the days for us.  Uncle Harry’s funeral will be one week from today…………. 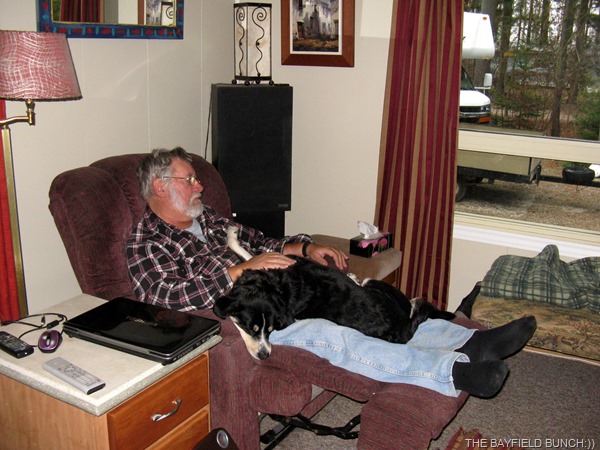 IT WAS FOUR & HALF DAYS OF GRUELING TRAVEL FOR THE BUNCH

GROANER’S CORNER:((   A man is having a really bad day on the golf course. By the 14th hole, he's missed one putt too many, and he lets loose with a string of profanities, grabs his putter, and storms off toward the lake by the 15th tee.
"Uh-oh," says his caddie to one of his playing partners, "There goes that club."
"You think so?" said the other golfer. "I've got five bucks says he misses the water."