KELLY ‘ACED’ THE WRITTEN PART OF HER ARIZONA DRIVER’S LICENSE TEST THIS MORNING, BUT………

SPRING IS IN FULL SWING WITH A LOT OF NEST BUILDING IN OUR YARD
How nice to be outside last night doing a bit of stargazing under a clear night’s sky in a short sleeve shirt.  To me, that is always special.  Sunrises are earlier these mornings & with the temperatures rising each day we are out for our a.m. walks sooner.  Think we got over 80 degrees today & it was very typical of a hot July day in southern Ontario.  On our walk we came across neighbor Matthew out grazing his young family of Sheep in the cooler morning air. 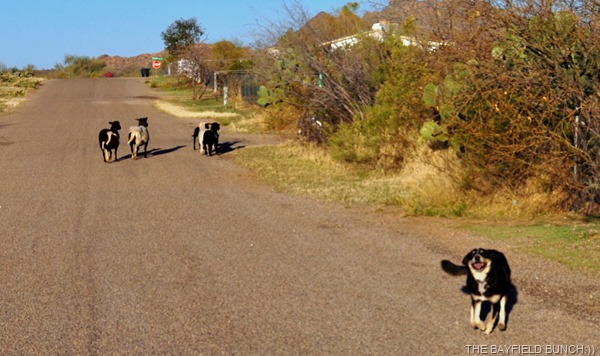 PHEEBS COMES RACING DOWN THE ROAD TO TELL ME SHE HAD JUST SMOOCHED A SHEEP
Good news is that Kelly scored 92% in her written Arizona driver’s license test this morning.  She had thought it was only the written test she had to do.  Then they dropped the bad news part on her.  A vision test plus a driving test was required as well.  She was not mentally prepared for that.  Bit of a struggle with the vision test which really stressed her out for the driving test.  A quick trip next door to McDonald’s for a pail full of coffee to steady the nerves & it was back to the License Bureau for her driving test.  Orange cones were placed in various parking lot places for Kelly to back around & park, etc.  Did OK there but then it was out onto the highway with the lady Examiner heading for one of two round-a-bouts in Wickenburg.  Round-a-bouts are built for no other reason than to confuse & be-frazzle unsuspecting motorists who are not used to them.   We are not used to them!!  Bit of a ker-fuffle as Kelly & the driver Examiner lady got themselves into a wrong lane confusement but Kelly managed to wheel it over into the right lane with tires screeching & headed for downtown Wickenburg….as instructed.  Kelly said the Examiner made a big face careening out of the round-a-bout scuffle & she thought her license was doomed for sure. 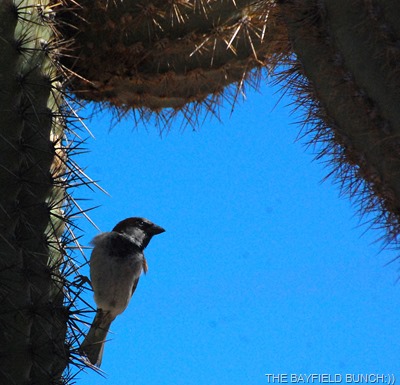 Next, a stop sign on a hill.  No problem.  A few more twirls around the streets of Wickenburg & it was back to the driver’s license place they headed.  Kelly figured the frightened Examiner cut the test short once she regained her frazzled nerves from the round-about incident.  Now here’s where I kinda get blamed for something again.  I had meant to take the tow bar off the front of the Jeep upon returning from Borrego Springs last week.  Of course I forgot.  Kelly pulls up to a big tall curb & forgetting the tow bar was on….crashes into it propelling her & the examiner over top the windshield into a couple heaps on the sidewalk ahead of the Jeep.  Ok, so that never really happened but Kelly said the driving Examiner lady did make another big face after the curb crash.  Total doom now for sure, but hey, no damage to the Jeep or tow bar.  The Examiner never says a word & they proceed into the building…..without the Jeep of course. 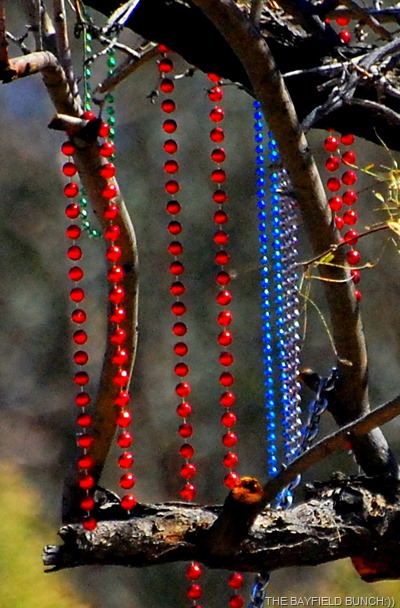 OUR FRONT YARD BEAD TREE IS DOING WELL >>>
Lady hands Kelly a copy of ‘How To Stay Alive In A Round-a-Bout’ & tells her to study it.  Kelly figures that’s it, no driver’s license today.  But suddenly a turn of unsuspected events.  The driving Examiner lady proceeds to issue Kelly her very first ever official Arizona Driver’s License.  Yay team:)))))))  My question is, when the lady Examiner handed Kelly her driver’s license……did she make another big face………… 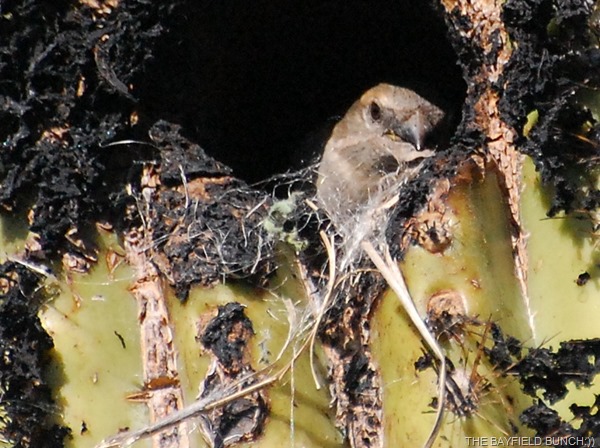 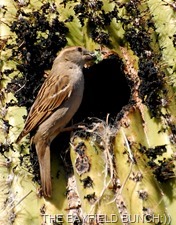 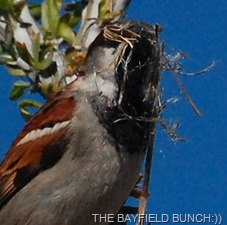 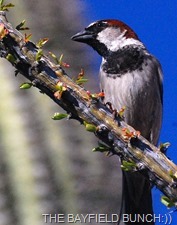 OUR BIG FRONT YARD SAGUAROS SEEM TO BE A FAVORITE NESTING SPOT
With Kelly’s Arizona driver’s license in place it is now up to us to decide on where to register our Class C Motorhome.  Will it be Arizona or will it be Ontario.  We are still weighing the pros & cons & all the ‘what if’s'.’  It has to be a right decision not only for now, but the future as well. 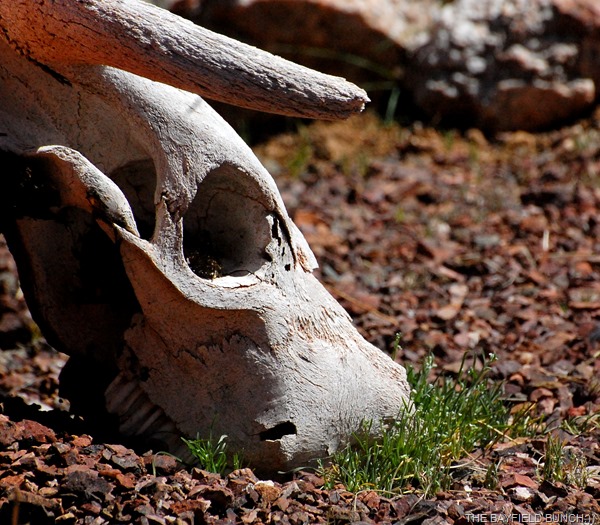 What is discouraging about importing a vehicle into Ontario are the additional side costs.  The vehicle has be inspected by a Canadian Government approved facility to insure it meets all Canadian standards.  It is Canadian Tire who has that contract.  The mandatory inspection at Canadian Tire is where the RIV is done.  A charge of $260 has to be paid to the ‘Registrar of Imported Vehicles.  Another $100 charge if your vehicle has A/C (air conditioning) And you have to have a recall clearance letter.  In Arizona we can get that letter free from a GM dealer.  In Canada the cost for that letter is $270.  We know this because Kelly called GM in Michigan.  That call was re-directed to GM in Oshawa Ontario & the person on the line gave Kelly a number to call about that recall letter.  That is where she was told the letter would cost $270!!  Boy, this one sure sounds ‘fishy’ to us, but that’s what the person on the line told Kelly.  Oh, & then there is the ‘Gas Guzzler’ charge.  Depending on what 8 cylinder engine you have in your particular vehicle being imported there is also a charge ranging from $800 to $4000.  I know this all sounds very bizarre & I am shaking my head writing this but Kelly did do her homework & these are the answers she received to her phone call questions this past week.  If I have any of this wrong, maybe somebody out there could correct me & I will do an updated corrections if that’s the case.  Also keep in mind, each Province has it’s own set of rules, regulations, do’s & don’ts.  What may be easy to do in one Province is not necessarily so in another Province.  Also keep in mind, we are dealing with questionable Government agencies & inadequacies here.  A lot of bureaucratic red tape & pure BS!!!!!!!!! 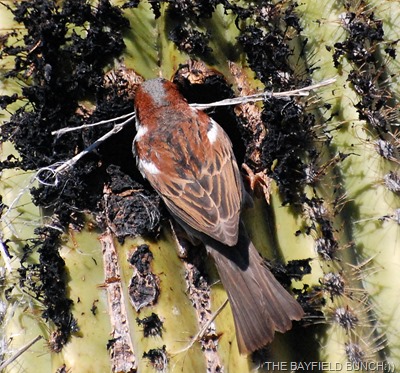 Emily from EMILY'S ADVENTURES IN RETIREMENT had the following questions in Tuesday night’s comments.  “  Will you be doing any "boarding" up of your Congress home - shutters on the windows and doors, in case window glass is broken, etc.? Will there be someone to "keep an eye on" your place while you are gone”?  Answering Emily’s questions I can say we will be doing the same as last year which means closing all the curtains mainly to keep out the hot summer sun.  No boarding up though.  Both electric & water shut off.  And yes, we do have a neighbor who will be coming in regularly to check our house.  He will be grazing his sheep here to help keep the weeds down as well.  Our Mexican neighbors on our north side will also be keeping watch on things as well as a neighborhood watch program in operation.  Yep, we’ll have lots of eyeballs on the house alright.  One of the few pluses about living in a neighborhood is local security. 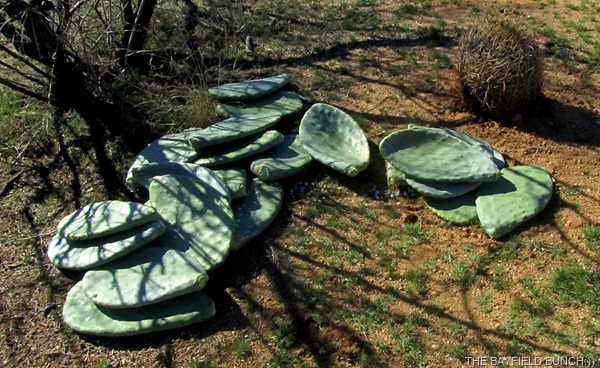 A WHEELBARROW LOAD OF CACTUS TO PLANT THIS AFTERNOON
Busied myself planting 23 Cactus plants this morning that were brought over by a neighbor in his wheelbarrow.  Placed the cacti along our new fence line by the road.  In a few years these cacti will form a tall thick impenetrable green wall.  My goal is to eventually surround our property with greenery making it totally private.  It is nature I want to see when I look out the door, not neighbor’s house’s, yards, RV’s, sheds, or any motorized vehicles.  The idea is to turn our 1 acre piece of property into a perfect boondocking site with electricity & running water:))

THESE CACTUS PLANTS WILL ALL GROW IN TOGETHER MAKING FOR A TALL 8 OR 9 FOOT IMPENETRABLE HEDGE…GREAT SOUND BARRIER:)) 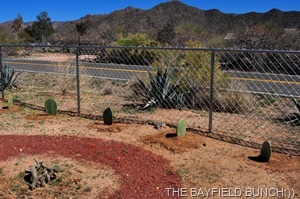 I never think of ourselves as having or driving a convertible.  But we do.  With our convertible we can also take the doors off, flop the windshield forward onto the hood & turn that convertible into kind of a dune buggy as well.  Of course we have a Jeep Wrangler & have never done any of those things except take the roof off once just long enough to take the dogs for a ride. 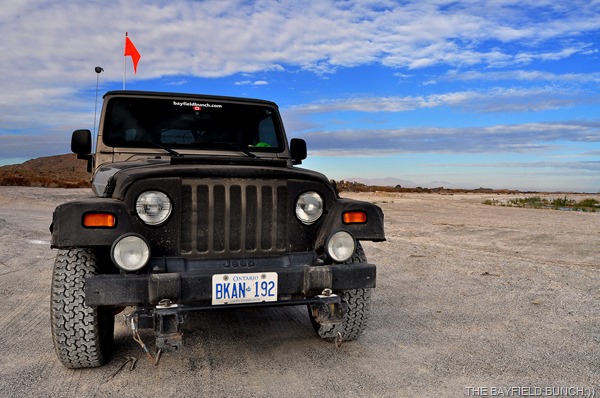 If it wasn’t such a PITA to put the soft top on & take off we might do that.  The hardtop roof we now have on the Jeep can be taken off easy enough by two strong armed people but it’s just too much for Kelly to help lift.  And with our cool winter days & cold winter nights here I just don’t see it as a practical thing to do anyway.  Maybe in the warmer Spring, Summer, & Fall months but we’re not here for most of that.  If our Jeep had an automatic fold down top we would use it for sure. Especially here in the southwest for daytime desert cruises. Press a button & the roof folds down, press a button & the roof goes up. Come on Jeep makers, let’s work on this concept & give us older adventurous folks an ‘automatic’ easy top down break for our Jeeps eh:)) 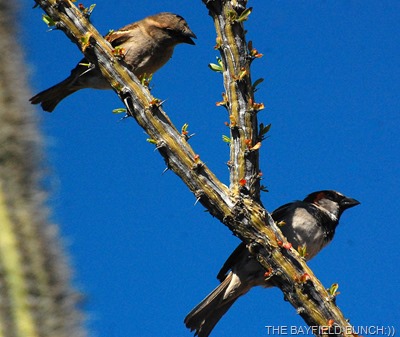 <<< LOOKS LIKE MOMMA BIRD IS GIVING PAPA BIRD A GOOD BEAK LASHING
And speaking of the Jeep, it looks like we are pretty much due for a new set of tires.  When towing a vehicle one cannot take any chances on worn tires blowing out.  We had to replace one of the original 4 tires just over a year ago & the replacement, although the same make & model as the the others, had a different tread design & I’ve never liked that.  Always seems to be some kind of hidden expense lurking around every corner:((  And speaking of corners…….. 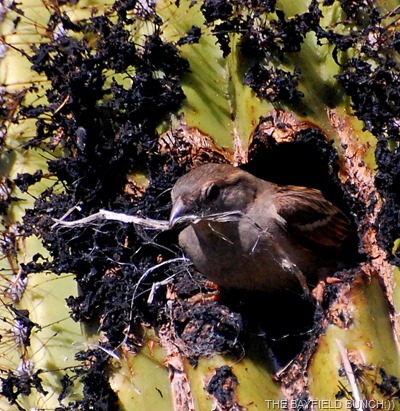 GROANER’S CORNER:(( In an arithmetic class one day, the teacher says to one little fellow, "If you had a quarter, and you asked your father for another dollar and 50 cents, how much money would you have?"
"One quarter," the little boys says.
"You don't know your arithmetic," says the teacher, shaking her head.
The little boy shakes his head, too. "You don't know my father."
-------------------------------------------------------------
- Tourists see the world, travelers experience it.
- Home is where your pet is:))
- "If having a soul means being able to feel
love and loyalty and gratitude, then animals
are better off than a lot of humans."
(James Herriot)
- The pessimist complains about the wind; the optimist expects it to change; the realist adjusts the sails -William Arthur Ward
- The only thing better than right now will someday be the memories of right now...AL.
- It is not so much having nothing to do as it is not having the interest to do something....AL.
Posted by Al Bossence at 3/13/2013