I WAS ONLY ABOUT 10 FEET FROM THE RATTLESNAKE WHEN I SAW IT….BUT SOMETHING DIDN’T SEEM RIGHT 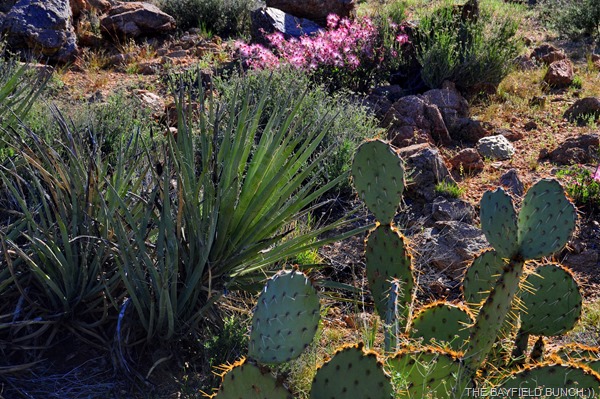 Always like how the Moon casts it’s desert shadows.  A stroll with Pheebs through our little Cactus garden Thursday night sadly reminded me I have only a couple weeks to enjoy the crystal clear starry skies here in west central Arizona.  Back home at our digs in Bayfield Ontario the sky is obscured by tall Pine trees all around us.  One can only catch fleeting glimpses of the night sky through the Pines.  A few stars, a shadowy Moon maybe.  We will not likely see another fiery sunrise creep up over the horizon until we are once again on the road headed south in the Fall.  Sunsets, sunrises, & big mountain edged starry nights are only a few of the many reasons we like it so much here in the southwest & fortunately we are far enough away from any large light polluting cities & urban areas to spoil our nightly starry sky views.

FAIREY DUSTER
Rather than our usual morning walk we decided to Jeep ourselves out to the desert & explore another area we hadn’t been in before.  Loaded up Rascal Buns & we were off on another soothingly calm Arizona morning. 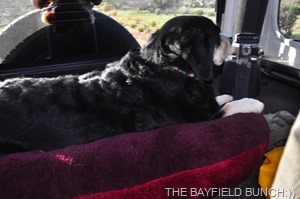 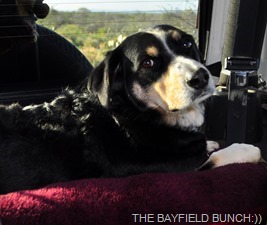 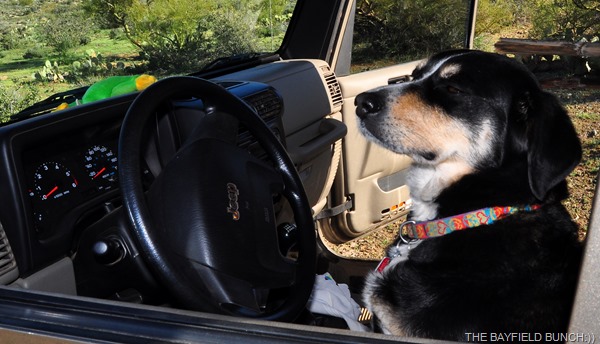 PHEEBS HAS HER OWN BED IN THE BACK OF THE JEEP BUT SOMETIMES JUST LIKES GETTING BEHIND THE WHEEL TO DO A BIT OF DRIVING HERSELF
Jeep roads are everywhere in the desert disappearing into sandy washes, over rocky ridge lines & into the tall greenery of Saguaros, Ocotillos, Mesquite & Palo Verde trees.  One just has to pick a road & follow it as far as one’s adventuress imagination will take them.  Ambled up a dusty rock strewn rut infested chunk of trail this morning not far from our familiar House Rock in the vast desert area behind our house.  Parked the Jeep & headed out on foot up a ridge.  As always here in the Sonoran desert it only takes a few feet of altitude for the landscape to change & just keep on changing.  Once off the flat desert floor we began getting into Ocotillo’s, Agave plants, Saguaros, & a host of flowering shrubs, blossoming flowers, & blooming cactus.  It was 8 a.m. & the low morning Sun tumbled long cactus shadows across the desert floor & beyond. 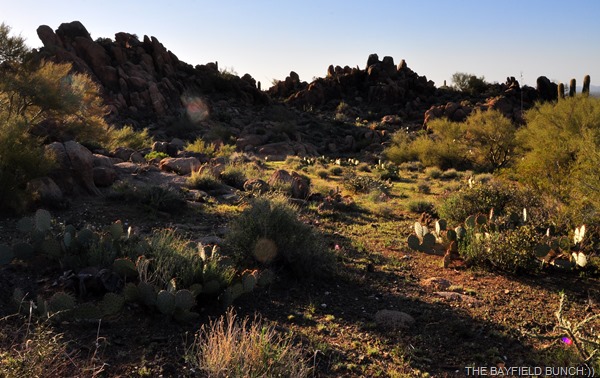 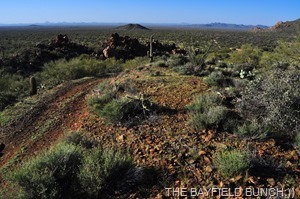 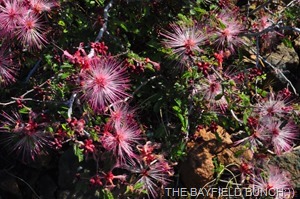 The thought of Rattlesnakes, especially this time of year is always on my mind & that is why we try to get out early in the morning while the night’s coolness is still upon the desert rocks & sand.  Best to hike on the shady side of the rock formations rather than on the already warming sunny side. 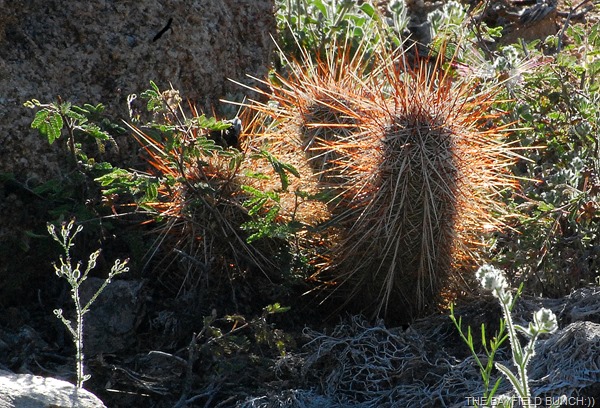 I didn’t see the Rattlesnake just about 10 feet to my right.  And there was a reason I didn’t see it.  It never moved & it never rattled.  It was dead.

IT WAS THAT CURIOUS LOOPING TWIST IN THE SNAKES BODY THAT SEEMED ODD
I have seen live Rattlesnakes in captivity but none in the wild as yet.  Had never seen a dead Rattlesnake before & here was my first one.  Except there was something strange about what I was seeing.  Approaching slowly it looked very long to me.  As I drew closer I could see it had suffered severe head trauma, but there was something odd about the way it was laying there.  The other end of the snake was unrecognizably mangled as well.  I hollered for Kelly who was a couple hundred yards away pursuing an old dead Agave stock.  Pheebs in the meantime kept a safe distance just in case.

Standing near the snake taking a few photos I still could not figure out a curious looking configuration about two thirds the way along the snakes body.  When Kelly got there she carefully poked her Agave walking stick about the spot where the confusing part was.  When she slowly pulled the snake’s body back a few inches……we were in for a surprise.  Under that curious twist in the snakes body were two rattles.  That could only mean one thing.  We were looking at two snakes.  Peering closer I suddenly realized the tails of the Rattlesnakes were joined.  The mystery of that curious twist was solved.  They had obviously been killed at the same time while mating.  There was no other trauma to either snakes body.  Just the mangled heads.  With that mystery solved, it immediately led to another one for which we have no answer.  What killed both Rattlesnakes basically at the same time, in the same manner, in the same place?  I’m guessing the snakes may have died sometime late Thursday afternoon. 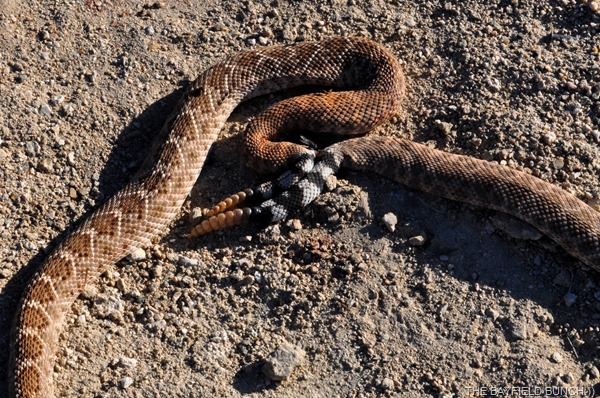 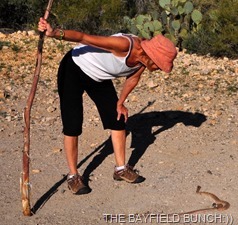 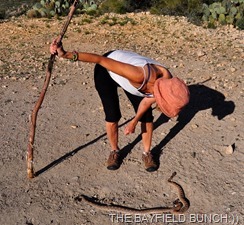 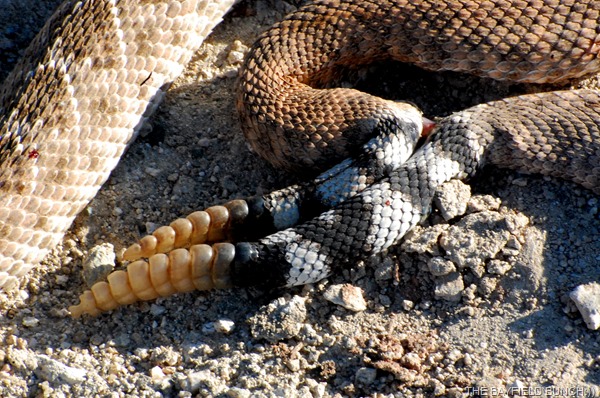 We continued our walk with a heightened sense of awareness.  The early morning views across the sweeping valley floor from our elevated position on the ridge were awe inspiring.  Totally alone & at one with Nature.  The little town of Congress was far distant on the horizon & barely visible enough to interfere with the desert stillness.  Their were photographs everywhere & I knew for every photo I took, I had missed a thousand.  These are the moments special memories are made of.  And this morning………we made a few more. 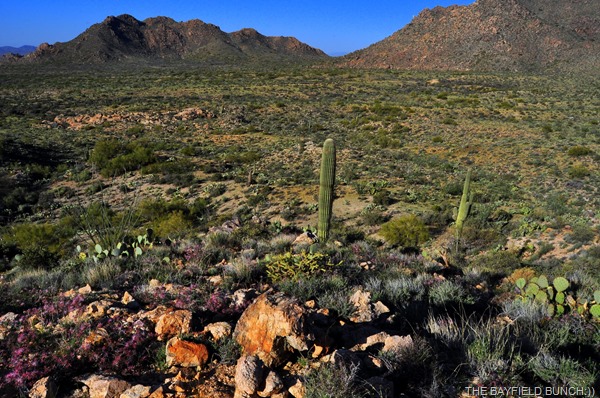 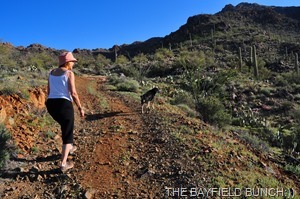 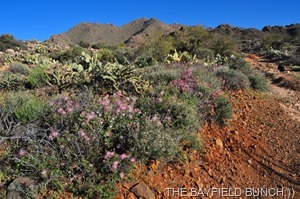 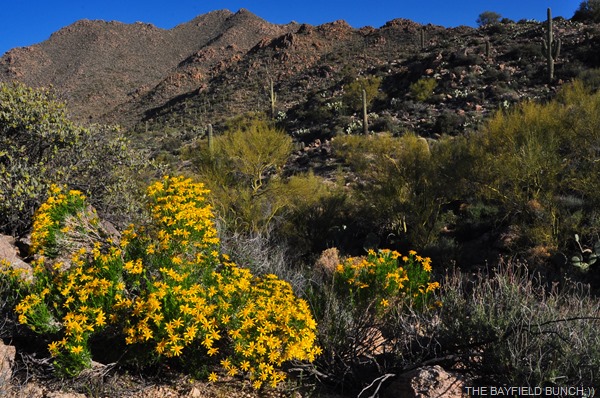 BRITTLE BUSH
We were home before 10 & Kelly headed off to Wickenburg for groceries.  Pheebs & I headed off around the other side of the house to feed the birds. 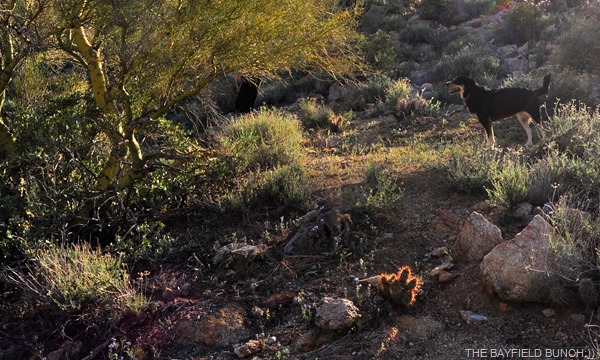 On the heels of Nina’s posts on Bisbee Arizona, Mark over at the BOX CANYON BLOG follows through with his own take on Bisbee.  Turns out the WHEELING IT folks were in Bisbee the same time as as the Box Canyon Blog folks but never the twain did meet.  Both these Bloggers are fine writers & photographers & both do a mighty fine job capturing the ambience of a little town Kelly & I have come to love over the years & visited many times.  In fact, this is the first winter in 6 years we have not been to Bisbee Arizona.  To experience Bisbee proper one has to get their boots on the ground, their heads into exploration mode, open their minds to the sights, sounds, & colorful characters around them & take the time to experience what it is all about.  Bisbee is much, much, more than walking through a few trendy shops along main street. 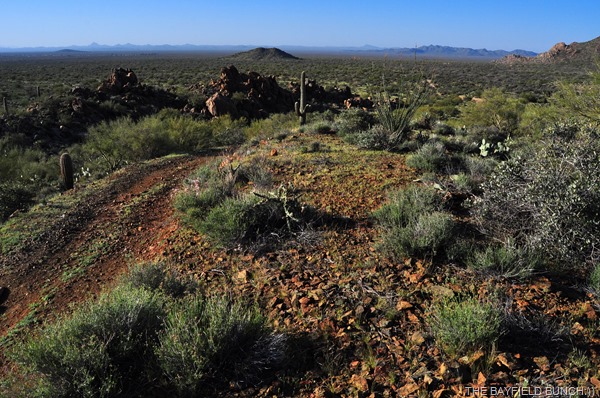 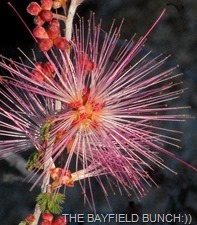 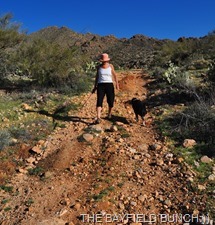 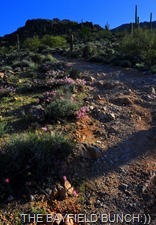 I’m writing this paragraph at 5:25 a.m. Friday morning.  Two weeks from now about this time we will probably be somewhere north of Congress Arizona in the first hour or so of our long journey home.  How long it takes us to get there will depend on weather but usually it is about a 6 day journey.  And it’s not an easy journey.  But a journey nonetheless & I’m always happy to be on the road going somewhere.  Whether we will stick to our quickest way home route or not remains to be seen.  We do have a habit of sometimes changing directions in mid stream.  Peter & Bea from AMERICAN TRAVELER currently on their even longer journey to the east coast have had to take a slight jog southwards because of cold & snowy weather along their path to the northeast.  We may have to do the same if these current winter-like weather patterns do not smarten up!!

Ever wonder why some men grow beards.  Think I read somewhere it comes from prehistoric times before the invention of razor blades.  It seems men also grew (& still do) beards to make themselves look fierce & intimidating to friends & foe alike.  Nobody in their right mind wants to mess with anyone who looks fierce & intimidating, right.    I grew my beard to hide my chin.  So much for ancient beard theories. 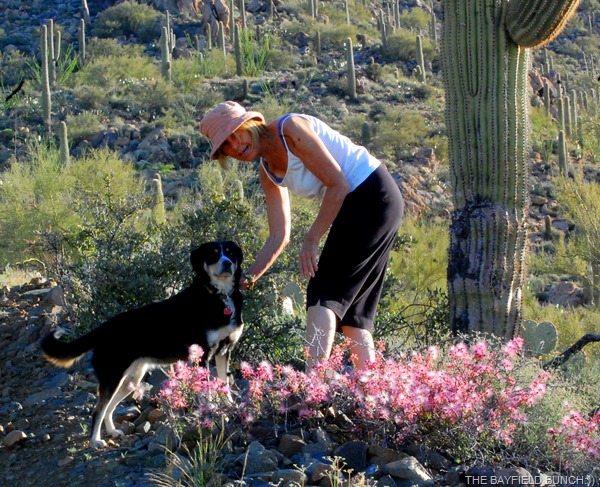 GROANER’S CORNER:((  Grandma was making her very first flight aboard a plane from L.A. to New York.
They had only been in the air for a few minutes when she complained to the stewardess that her ears were popping.
The girl smiled and gave her some chewing gum, assuring her that many people experienced the same discomfort.
When they landed in New York, Grandma thanked the stewardess. "The chewing gum worked fine," she said, "but tell me this... how do I get it out of my ears?"
-------------------------------------------------------------
- Tourists see the world, travelers experience it.
- Home is where your pet is:))
- "If having a soul means being able to feel
love and loyalty and gratitude, then animals
are better off than a lot of humans."
(James Herriot)
- The pessimist complains about the wind; the optimist expects it to change; the realist adjusts the sails -William Arthur Ward
- The only thing better than right now will someday be the memories of right now...AL.
- It is not so much having nothing to do as it is not having the interest to do something....AL.
Posted by Al Bossence at 3/22/2013