My aim with this post is to quickly get things up to date starting with our departure from Indio California early Wednesday morning.

When we turned in for the night Tuesday the weather was calm & the air warm.  Opened all our roof vents.  It was those roof vents which woke me a few hours later with their rattling.  The winds were upon us.  The surrounding Palm trees were flapping while dust & debris scattered itself across the large parking lot.  Had my fingers crossed it would turn out to be a tail wind for us & not a cross wind.  Luckily, it turned out to be a tail wind.

In a comment, RETIRED ROD mentioned about Home Depot being right at I-10.  Not so, at least not the one we were at.  We had to backtrack south from Jackson Street for maybe 3 or 4 miles to pick up I-10 east.  The huge mall parking lot we were in also had a ‘Toys R Us’ store plus others.  Lots of neon signs around us.  I’m guessing it was a newer mall.  We were on the road by 5:30 a.m. heading home.

I was hoping to make the Arizona State line & Quartzsite with the existing fuel we had left in the tank.  I had filled the tank in Congress before we left & sure did not want to pay the high California gas prices.  Ever notice how aware you become with a low fuel gauge & the fact that all of a sudden there are no gas stations for miles.  Saw one gas station on I-10 just east of Indio & that was it until Blythe California.

Rolling into Blythe nearly 2 hours later the sun was slowly rising as our fuel gauge was rapidly dropping.  Crossed the Colorado River & Arizona State line with fingers crossed & eyes on the gauge.  We were on the empty mark at that point.  Would we get an audible ‘low fuel warning’ with this vehicle.  I knew Quartzsite was only another 10 miles or so.  Just had to make it through the Dome Rock Mountains.  Where is a flat fuel saving stretch of road when one really needs one!!

But make it through the Dome Rock Mountains we did & there stretched out on the valley floor ahead was Quartzsite Arizona.  I knew there was a ‘Loves Truck Stop’ on the west end of the Q on our side.  My eyes darted back & forth between the fuel gauge & searching for the big ‘Loves’ sign.  Phone rang & it was a Deer Park Lodge call for Kelly.  She was on the phone as I slowed for the exit off I-10 to Loves.  I was on the ramp when I heard the low fuel ‘bong, bong, bong’, sound.  Now, that was just way to close for comfort & not something we normally do. But from the tank being full to the tank being empty we had a little over 500 miles of running time.  I now know where my fuel limit is & how far a tank will take us under average conditions. 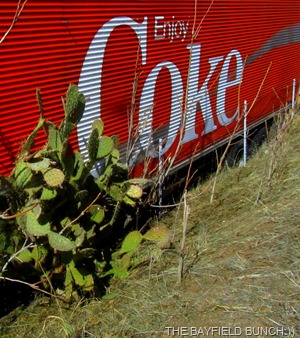 Put just enough fuel in to get us home because I didn’t want the rig sitting with the weight of a nearly full gas tank for the next month before we head back to Canada.  Distance traveled from the time I filled the tank in Congress to the ‘bong-bong’ warning in Quartzsite…539 miles.  Total distance traveled for the rig’s shakedown cruise…..632 miles. 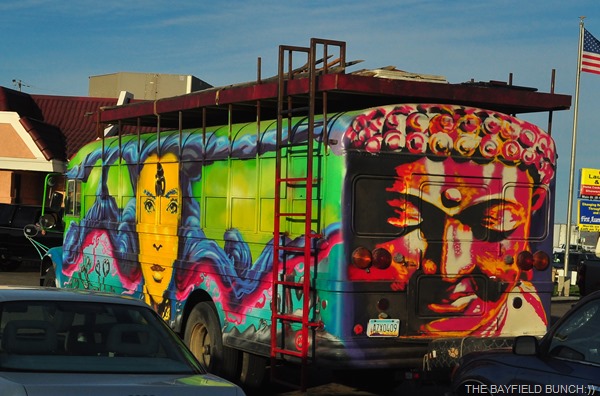 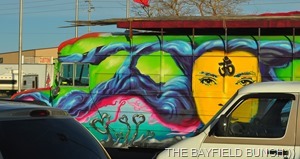 ALWAYS LOTS OF COLORFUL HAPPENINGS AROUND McDONALDS IN QUARTZSITE ARIZONA

A quick breakfast to go at McDonald’s in Quartzsite & we were headed for our Congress home base on another beautiful Arizona morning.  As I’ve said before, my favorite time of day for driving is between sunrise & about 10 in the morning.  It is that earlier morning light that gives the beautiful landscape it’s magical charm.  And nowhere is it more apparent than here in the west with long mountain shadows spilling & stretching into surrounding valleys & canyons.  Rolling across the quiet desert floor, many memories were brought to mind.  Again, my thoughts turned to how fortunate we are to be living the lifestyle we do.

ON THE ROAD TO HOME BASE JUST WEST OF CONGRESS AZ.

We were home by 10 a.m. & I noticed right away how our yard looked a little greener than just a few days ago.  Pheebs was glad to be home too as she raced all around the property, in the front door of the house & out the back.  Kelly & I immediately busied ourselves with unloading the rig & getting ourselves re-organized.  An hour later we slipped quietly back into our house routine & there we remained for the rest of the day.  I like being organized & our 2 day shakedown cruise had really scrambled me.  But, I’ll be back with more thoughts on that in the next few days.  Now, for today……. 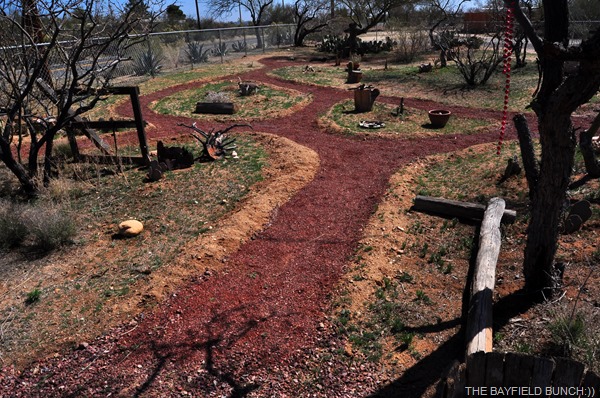 LOOKS LIKE WE FINALLY HAVE SOME GREEN STUFF GROWING

Cheryl Ann from DEEP CANYON had a question regarding her high clearance Nissan X-Terra & could it make the sandy road trip to Ghost Mountain.  Answer is yes, no problem.  Just be aware of some ruts & pot holes along the way.  And, do not head in there if it has been raining.  Chances are good you could get stuck.  By the way, lots of info about the Marshal South family’s story atop Ghost Mountain on the internet.  And, there is a film/DVD by producer & director John McDonald called, THE GHOST MOUNTAIN EXPERIMENT.  We met John & wife Lydia at the base of Ghost Mountain a few years ago.  My post about that meeting is here at, THE JULIAN CEMETERY & DIRECTOR JOHN McDONALD. 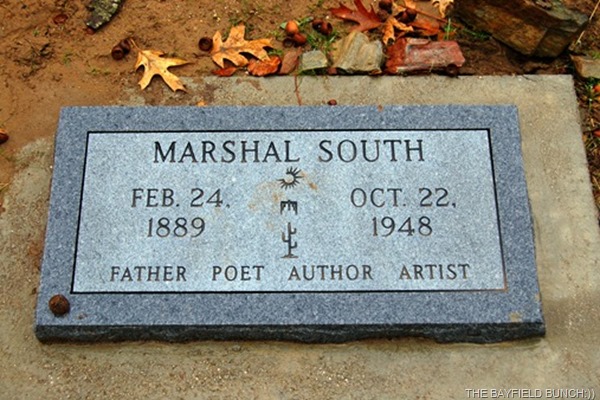 Did me a little crawling around under the rig this morning.  Everything looks so new.  Kind of interesting how the rear wheel wells & other areas of the coach are sprayed heavily with a brown foam.  Had never seen that before.  We will definitely get the whole unit undercoated this Fall. 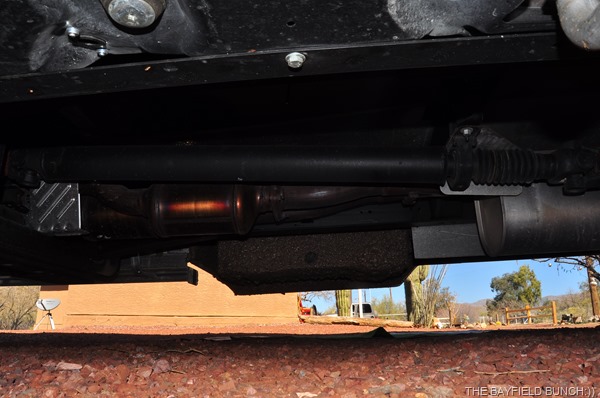 EVERYTHING LOOKS SO NEW UNDER HERE 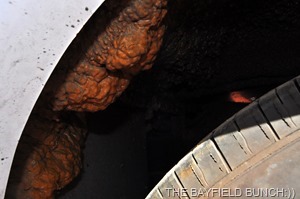 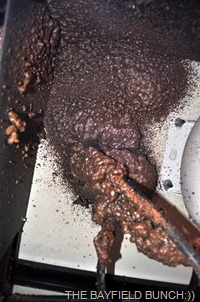 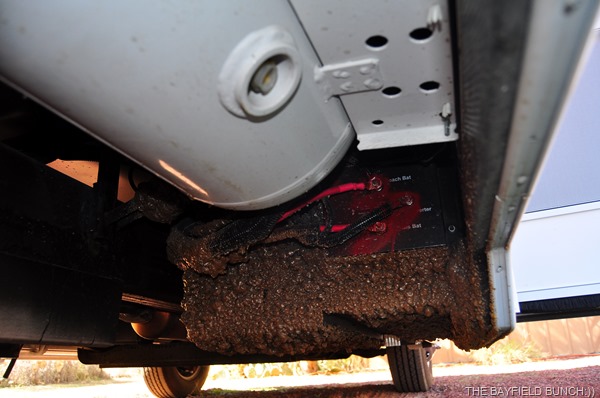 LOTS OF SPRAYED FOAM UNDERNEATH THE COACH PART

And that totally uncomfortable dinette has to come out of the rig for sure.  In the 4 days we were away we never sit on that  thing for one minute.  Didn’t even take the table with us.  After our shakedown cruise, that dinette area renovation has become priority one.  The folks who owned this rig before we did, ordered it right from the factory in Elkhart Indiana with that dinette in it.  That may have been a big contributing factor as to why they only put 3,000 miles on the Sunseeker & decided to sell it.  Kelly did call ‘Forest River’ (the company that built the rig) today to see if they do renovations but the lady said no, they only do warranty work.  We did put a ‘dinette for sale’ note on the Forest River forum site.  Have had a couple replies.  Myself, I would just be happy to give it away if someone would come & remove it for us.   Been looking at suitable recliners on line this morning.  Thought about a love seat idea but we like the independent versatility of recliners.  They can be swiveled towards the TV & of course, less weight. 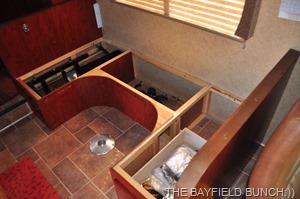 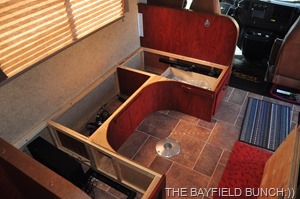 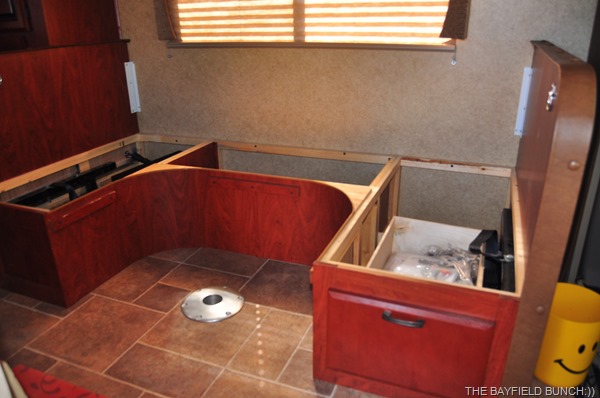 THIS DINETTE FRAMEWORK HAS TO BE TAKEN OUT

Looks like we might be heading back to Ontario sometime in the first week of April.  It will depend on weather, & whether we feel like leaving then or a bit later.  We like to stay flexible.  But like every year, after a few days of being home we’ll say, ‘why did we come home so early’:((  Always happens.  But one reason is the bad tornado weather that can kick up across the mid west starting around mid April it seems.  It’s another reason we don’t dilly dally around on the way.  Point A to point B just as quick as we can go.  No sightseeing, no visiting.  Just head er on home & slide quietly into our Canadian lifestyle once again for the next 6 months. 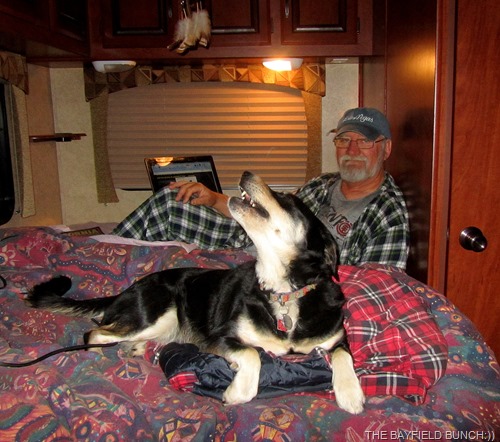 Got some bad weather headed our way & it looks like the week-end is going to end up being cool & wet. Oh well, hopefully the rain will help spark the desert into bloom. And, by the looks of the comments we received from folks in Borrego Springs, it’s good we got out of town when we did. They have had a couple really, really bad windy nights. Not good.

I have a special place in my heart for all animals, especially dogs.  It was Jim from JIMBO'S JOURNEY who opened the door to that place for me today with his post about Chica, the hungry & stray little Chihuahua dog who, needing help & human kindness, wandered into Jim’s life recently………….. 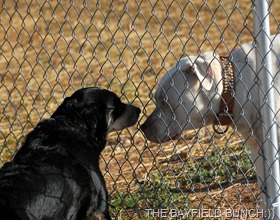 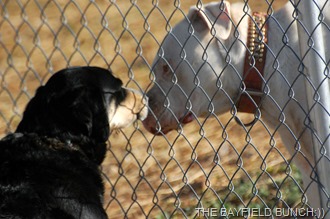 PHEEBS WASN’T TOO SURE ABOUT THE NEW KID ON THE BLOCK THIS MORNING, BUT THEN…..A SMOOCH

GROANER’S CORNER:((  "I'm sorry," said the clerk in flower shop, "we don't have potted geraniums. Could you use African violets instead?"  Replied the customer sadly, "No, it was geraniums my wife told me to water while she was gone."

And did you know brain cells come and brain cells go, but...fat cells have a tendency to live forever.