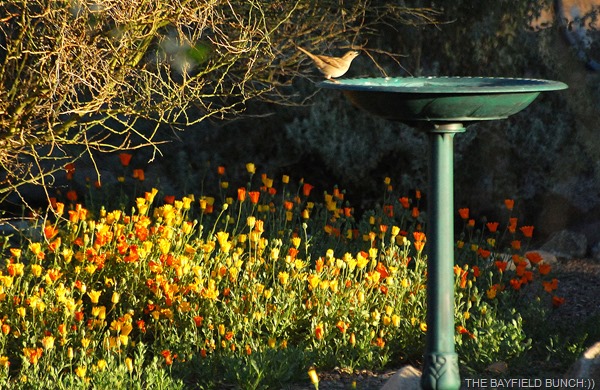 I think it was the first time I have seen the Milky way stretch from horizon to horizon so clearly.  Beginning on the northeastern horizon in Cassiopeia it stretched across the heavens overhead through the flying swan known as Cygnus & on down into the southern hemisphere brushing through Sagittarius the great teapot & tickling the very tail of the large Scorpion, Scorpios.  Totally magnificent clear night time skies out here in Arizona:))

Kelly again phoned the Canadian border folks in Port Huron Michigan.  After talking with officials this morning we have made our decision as to where to register the Sunseeker.  And, it will be in Canada.  Bottom line is this……with our main residency in Canada the ‘vehicle has to be imported’.  And, by the way, Kelly does keep her Canadian Driver’s License & no, I will not be getting an Arizona driver’s license.

CAN YOU SEE THE LARGE STONE DESERT TORTOISE

We could still register it in Arizona & drive it to Michigan & store it until we return to the States in the Fall but that is not an option for us.  Wouldn’t think of storing a motorized vehicle for 6 or 7 months.  Besides, we want to use it for further travel in the coming summer months.  Plus, storing a vehicle comes with a whole lot of ‘what if’s.’ 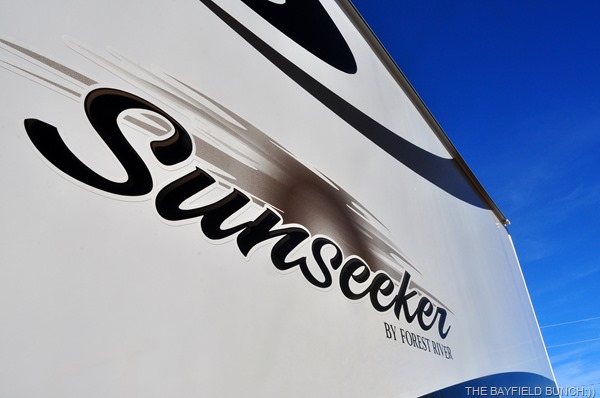 That 8 cylinder ‘gas guzzler’ charge mentioned in my Wednesday post is bogus.  Asked the official about that this morning & he said, ‘no such thing’.  The RIV (Registrar of Imported Vehicles) & A/C (Air Conditioning) are both factual charges & after double checking Kelly found out the RIV charge is $220 not $260 or $270.  The border official, as well as PETER also said, “The RIV inspection is free (at Canadian tire)! You have then already paid $220. That covers the inspection. The inspection itself is a 15-minute affair.  The $220 can be paid at the border crossing.  Peter also said, “As long as your main residence is in Canada you are not allowed to drive a vehicle with U.S. license plates into Canada.  We have been through it and it wasn't any fun at the border. They will stop you right there at the border”!  Barrie in the Shout Box is also correct with his information.  But, here’s something else we just found out this morning.  Not only do we need an updated ‘recall’ list from General Motors on our Sunseeker’s chassis but we also need one from Forest River the rig’s manufacturer.  GM’s letter which we will pick up in the morning at Sands GM dealership in Surprise is no charge.  Forest River on the other hand charged us $25 to send us a an updated ‘recall’ email:((  It’s one of the things that does not impress me about the human race.  Seems just about every human being always places waaaaay to much importance on making a dollar off every other human being.  Ohhhhhhh, don’t get me started!! 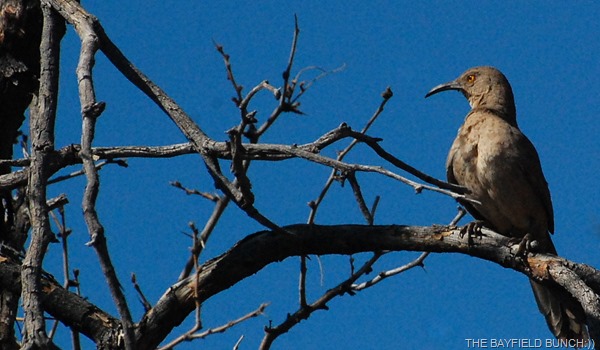 We know there are likely loopholes & short cuts to get around all this vehicle registration stuff but we do not want to take the chance of having Kelly’s American duel citizenship compromised in any way & that is exactly what can happen by trying to skirt around the edges with the Government. We will just simply play this one by the books, pay the fees, & rest secure in the knowledge we have done things right. If in the future we decide to sell the Sunseeker or something happens to one of us it will be far less complicated with a Canadian registration on the Sunseeker as well. And, ‘less complicated’ has been my latest two new buzz words these past few years. 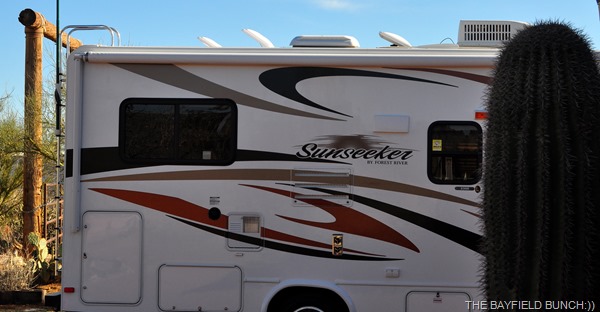 YEP, GONNA NEED 3 VENT COVERS ON THAT ROOF FOR SURE

Now, to clear up another point.  Kelly phoned the Canadian Tire Store in Goderich Ontario this morning & was told they do not add an additional charge for their shop time.  I had some wrong info there again!!  My apologies to Canadian Tire of course.

In conclusion, one thing is absolutely clear to me about all this.  Everything, & I mean everything you talk to people about whether they be Government Officials, friends, border personnel, neighbors, readers, Title Company people, Insurance folks, Ministry Of Transportation, vehicle dealers, on-line forums, the local candle stick maker, or Grubstake Joe & his lame duck horse out in the middle of Montana, it will be extremely rare for two pieces of information to ever be exactly the same.  And, it is that one fact more than anything else that makes most everything about anything soooooo confusing.

Example:  Three days ago we had a Canadian border official tell us it wouldn’t be any problem bringing our rig into Canada with Arizona registered plates.  This morning we had another border official at the same location explain in detail why that was not the case & why we could not do that.  So there ya go.  Who do you believe?  In our case we chose to believe the information we were given this morning & that is what our decision was based upon.  The fellow this morning just presented a far more detailed & logical approach as to what the proper procedure is & what in the long run would be best for us.

Ever had a quilt over you & then been wrapped up in it like a sausage in a crescent roll & carried by paramedics & firemen out to a waiting ambulance for a jouncy stomach turning ride to the hospital?  No, me neither but it happened to MERIKAY Wednesday night.  And that was all before she encountered the Elephant thing-a-ma-jig. 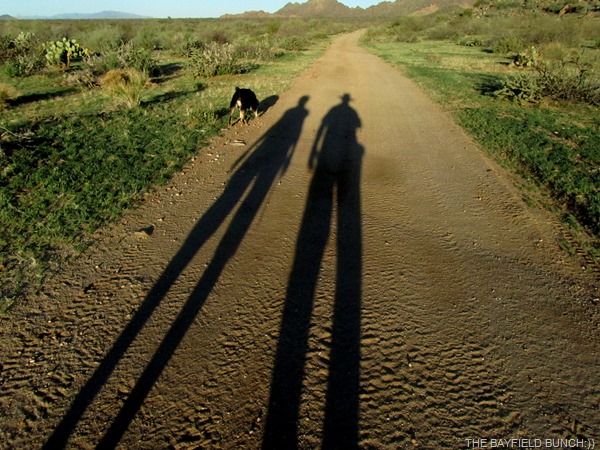 And for you outdoorsy adventurists I remind you to keep an eye on the, OH, THE PLACES THEY GO blog as these folks hike & explore the canyons & mountain trails of southern Utah right now.  One of my all time favorite scenic States:))

With our temperatures soaring up into the mid 80’s today our shaded front porch has become a favorite spot.  House stays cool even without A/C but it’s that nice cooling breeze on the porch that just feels so right.  Despite the sun wanting to burn my skin off I find this dry heat easier to take than our hot & humid July/August weather in Ontario.  Humidity turns me into a ball of sticky paste & I find it stifling & soooo energy draining.  This drier Arizona air is definitely preferable as far as I am concerned.  I think this has been our hottest Arizona day since traveling the southwest & it feels just fine if you don’t let the sun burn your skin off that is. 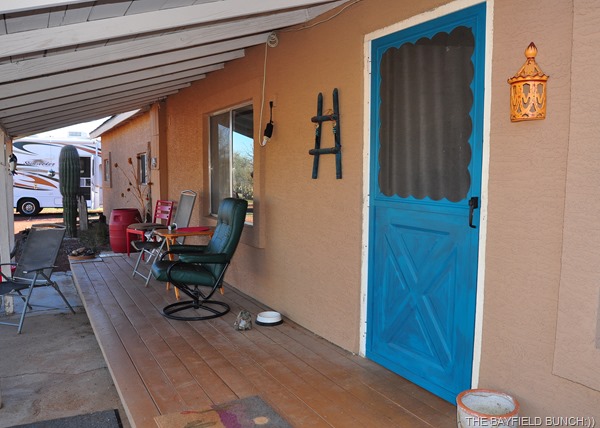 A steamboat cruise in Arizona?  What!!  Despite the recent sad loss of their beloved Basset Hound, Lucy, the folks over at THE FRITZ ADVENTURES have continued their travels east of Apache Junction.  It was along the Apache Trail drive they came upon Canyon Lake…& a Steamboat.  Check it out:))  I met Laurie, Bob, & Lucy just a few weeks ago:))

Question about the Cactus I planted Thursday. Speed of growth depends on moisture. If Arizona has a wet summer the cactus will grow faster. The cactus I planted will definitely grow much faster than Saguaros for sure………….. 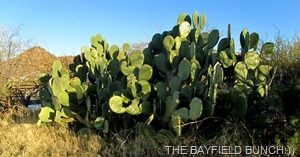 We are off to DISCOUNT TIRE in Surprise Arizona in the morning for new tires.  Spent time on the phone today talking with a couple tire guys to determine what is best for our kind of Jeep driving & have come up with Goodyear’s ARMOR TRAC tires.  Had thought of going to a wider tire but the guys explained some of the problems with doing that.  One thing we forgot to do with our last set of new Jeep tires was rotate them.  Just plum forgot.  Discount Tire sends out reminders to people.  At my age, I need reminders. 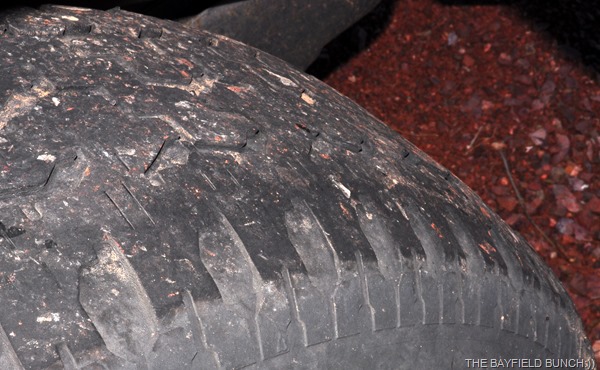 Ok, & what did we do all day?  Easy one word answer……nothing!!  Well, at least that sums up my day but Kelly was pretty busy most of the morning making phone calls & enquiries about you know what.  Been trying to stay off my right leg & hip for a few days to see if that helps so it has been a pretty slow couple of days.