ROOF IS DONE, NO RAIN, BUT MAYBE SNOW ON FRIDAY:(( 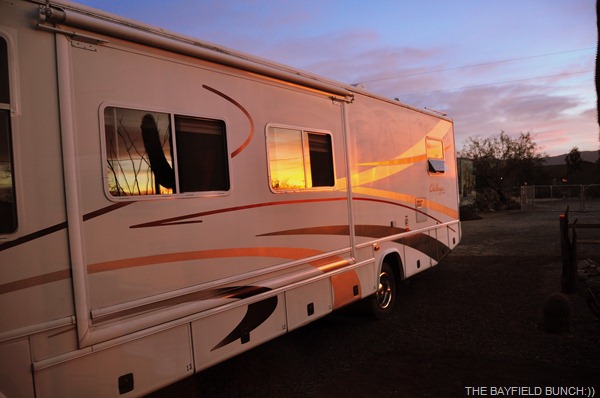 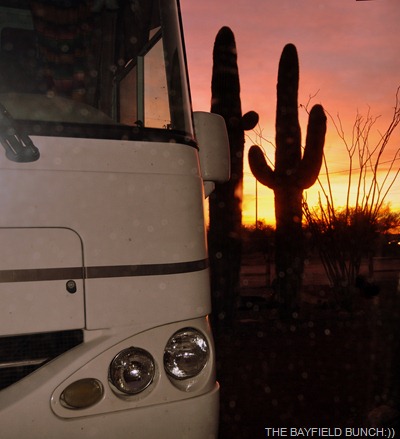 SUNRISE FROM MY BEDROOM WINDOW

Up at 3 a.m. & right away checked the sky.  With stars visible I knew the incoming inclement weather front possibly carrying rain, had not arrived yet.  My bedroom may not become a swimming pool after all.  Kelly, Pheebs, & I were just heading out on our morning walk when Terry Dresher, the roofing company owner, & helper Jose rolled in.  It was 7:40 a.m. 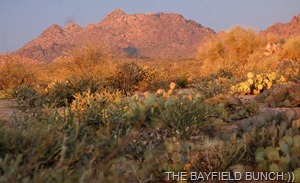 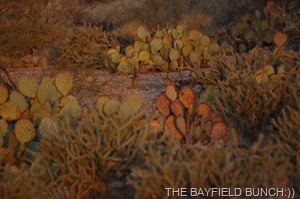 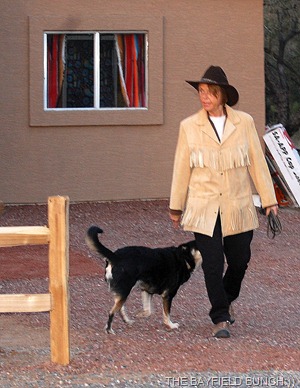 Didn’t take the fellas long to hoist up 10 sheets of 4 x 8 plywood & get er all nailed down.  I did crawl up their ladder & take a few pics.  Terry spotted a hole in our brick chimney & siliconed that for us.  Also did the seams on the section of metal roof that butts up against the new roof.  Fixed another small hole near the peak.  Nice when a contractor goes the extra distance to make things right for a customer. 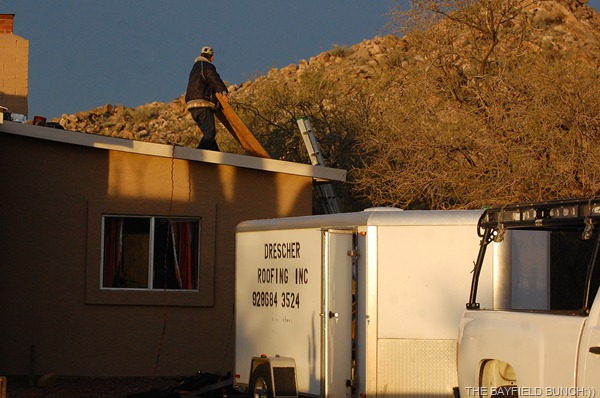 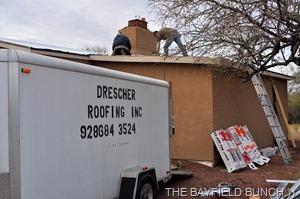 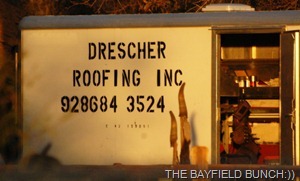 Knowing bad weather was heading our way we hopped into the Motorhome & headed over to North Ranch to take care of the holding tanks & top up our propane tank.  Stopped in Congress & threw $80 worth of gas in the tank as well which put it up to well over half.  Generator won’t work if the gas tank drops to a quarter tank so we wanted to be sure our Rochester guests next week could run the generator if they had to.  The rig is plugged into shore power but just wanted to be sure we had auxiliary power if needed. 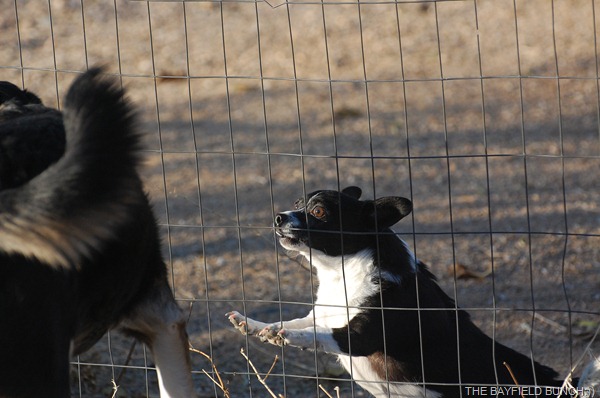 I pretty much kept myself on the end of the wheelbarrow again moving gravel.  Terry called me up the ladder a couple of times to have a look at what they were doing & I was able to grab a few more pics.  I think this is going to be a good quality roof from what I could see.  All materials seemed to be very heavy duty & the fellas certainly knew what they were doing. 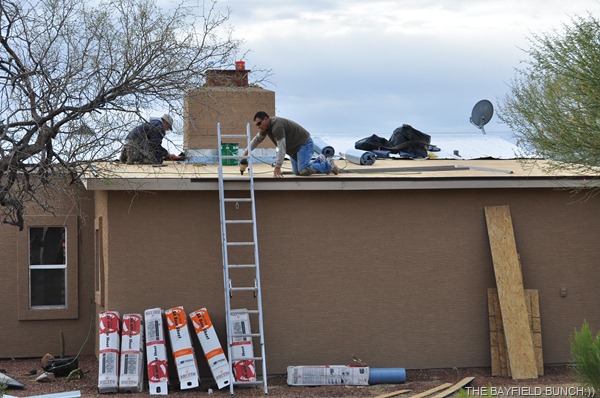 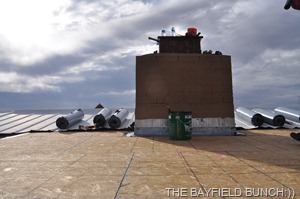 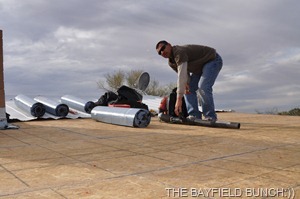 Skies became increasingly overcast as the morning went on.  Our computer weather map showed a rain bank far off to the northwest headed our way.  Winds picked up & temperatures dropped.  I gathered up all our outside stuff including lawn chairs, tables & garden tools, putting them in the shed.  Would the fellas on the roof finish the job in time? 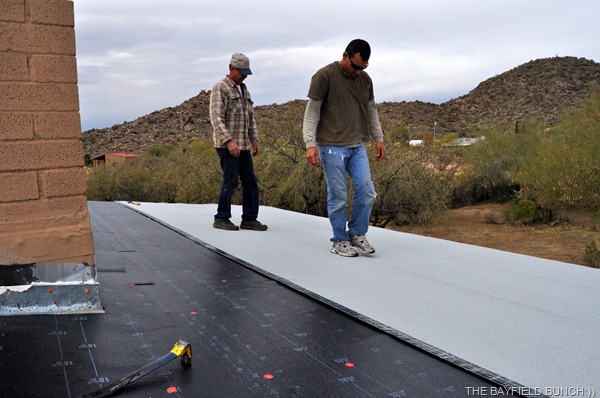 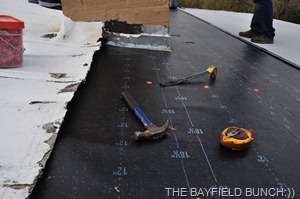 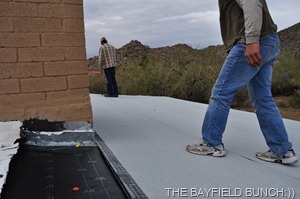 I kept plugging away with my wheelbarrow & they kept plugging away at their roofing job, & in the end…..the rain never came.  The roofers finished up their job about 12:30.  Couple hours later the sun was shining.  Dark skies to the southeast so the storm had gone around us.  I actually wouldn’t have minded some rain to soften the ground slightly underneath the 3/8 crushed stone I was working with.  Could have used the Jeep to pack the stones down.  Wished I had a water filled roller, oh well, I don’t….so quit wishin. 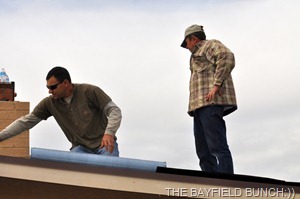 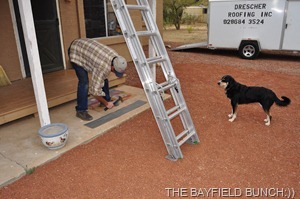 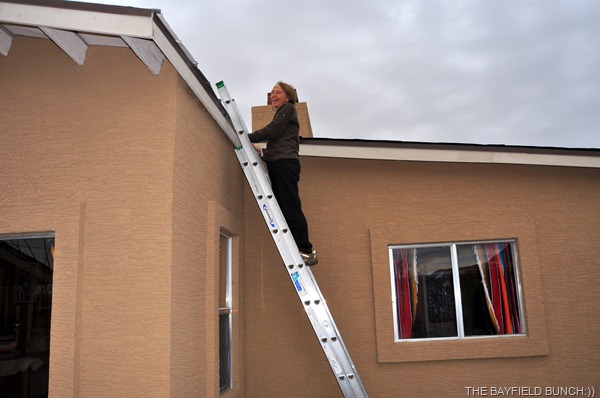 When Kelly, sitting at her computer this morning, uttered the words, “it’s hard to copy & paste without a mouse”, I knew exactly what she was talking about.  Imagine the blank stares of people just a few short decades ago.  Why would anyone want to paste a mouse on anything & why would anyone in their right mind want to copy a mouse.  A lot of folks got enough of the darn things running around their house as it is!! 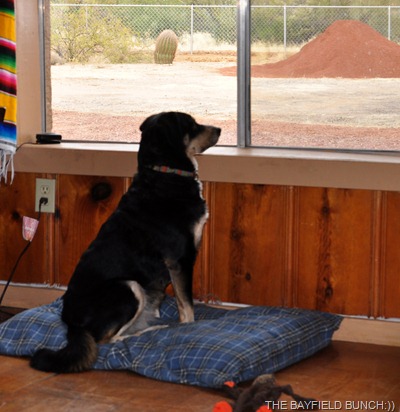 PHEEBS KEPT A CLOSE EYE ON THE WEATHER TODAY

Been literally drinking gallons & gallons of Cranberry juice for over a year now.  Not crazy about the Cranberry taste so have mixing Ginger Ale with it.  Makes for a great drink & has enabled me to cut down on drinking so much milk.  Kelly brought home a couple jugs of Cranberry Lite mixed with Raspberry juice a few days ago & ‘Walla’ I no longer have to add Ginger Ale.  Cranberry/Raspberry juice straight up.  Good stuff:)) 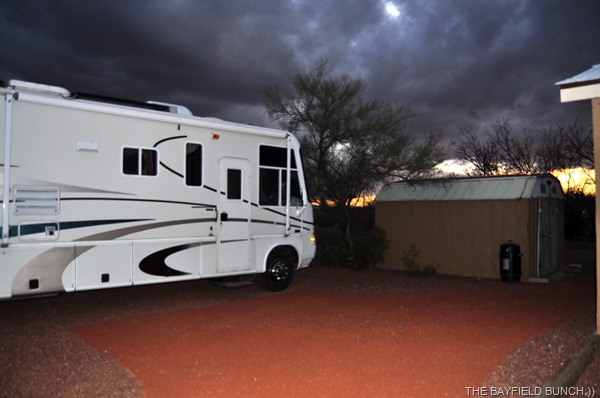 MAYBE TOMORROW I WILL HAVE SOME SNOW PICTURES

GROANER’S CORNER:((  You're in incredible shape," the doctor said. "How old are you again?"
"I am 78." The man said.
"78?" asked the doctor. "How do you stay so healthy? You look like a 60 year old."
"Well, my wife and I made a pact when we got married that whenever she got mad she would go into the kitchen and cool off and I would go outside to settle down." the man explained.
"What does that have to do with it?" asked the doctor.
"I spent a lot of time in the great outdoors."