NO, THIS IS NOT THE OLD STAGECOACH TRAIL, IT’S HIGHWAY 89 BETWEEN YARNELL & CONGRESS

We had heard of Indian Petroglyphs somewhere up around the old gold mining town of Stanton.  Also heard there was a narrow but drivable back road leading up through the Weaver Mountains from Stanton to Yarnell.  Our goal this morning was to find those two objectives. 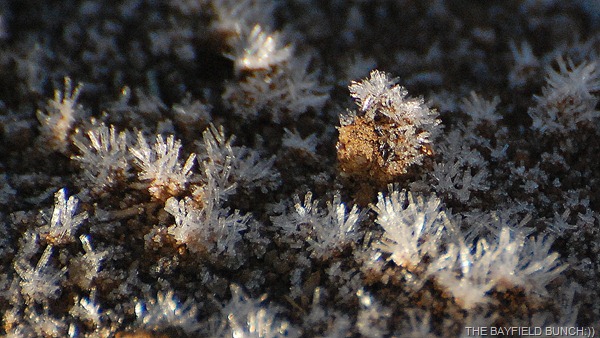 WE ARE HAVING SOME FROSTY MORNINGS 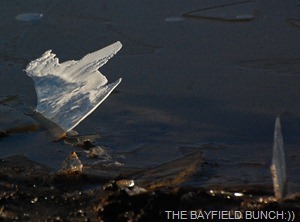 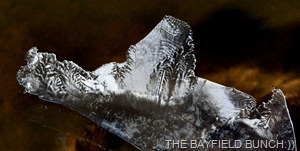 While in Wickenburg’s ‘Safeway’ store a week ago we both searched the isles for Tylenol Pain Meds.  Everything on those shelves but.  Tylenol cold products but no pain meds.  Asked at the Pharmacy counter where the Tylenol was & this is what we were told.  “We have not had Tylenol pain meds for a about a year now because of the big recall.’ What!!  We had never heard of that & found it hard to believe but the lady was insistent that the recall which had begun in 2009 was still in effect.  We talked about it on the way home & we couldn’t find any logic in the ladies statement.  Kelly called the CVS Pharmacy in Wickenburg after we got home….same story, no Tylenol.   Tylenol in Canada but no Tylenol at the Dollar Store in Congress.  Obviously, from reader’s comments, there is definitely Tylenol in America.  We just haven’t found it yet:(( 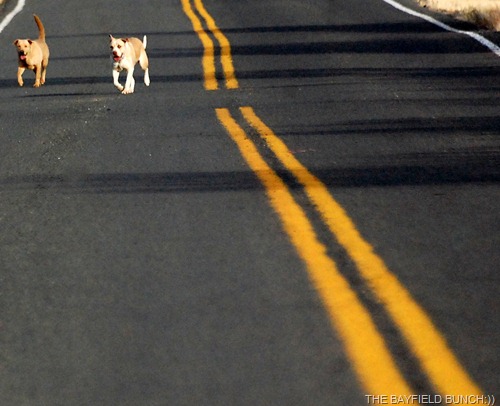 COUPLE OF OUR NEIGHBOR’S OUT FOR A MORNING STROLL

Kelly came across a newspaper article this morning that fits me to a T.  And, I am sure it fits many other men as well.  "GET OFF MY LAWN" WHY SOME OLDER MEN GET SO GROUCHY 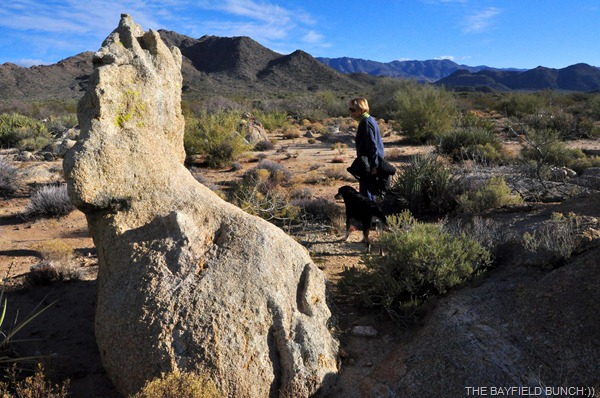 Had ourselves loaded into the Jeep & out the gate by 8:30 this morning.  Quick stop for gas in Congress & it was off to the  little RV mining community of Stanton Arizona.  With a warming sun beaming in the windshield we didn’t mind the cooler outside 35 degree temperature as we headed east. 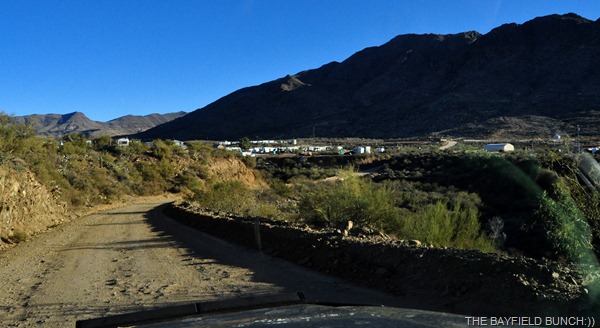 APPROACHING STANTON ARIZONA FROM THE WEST

With Stanton rolling by on our left we followed a rough & tumble road veering off to the southeast.  First time on this road so lots of new things to see, but it was the Petroglyphs we were looking for.  Never did find them.

What we did find was lots of evidence & activity regarding the mining of gold.  These mountains & hillsides are home to countless prospectors living in tents, shacks, RV’s, vans or whatever.  A few have even built sizeable houses.  I figure those are the guys who actually found some real gold & quickly built a real house with their loot.  Mine shafts can be seen on the hillsides, pits in the ground, digging machines scattered about & just about any barren inaccessible area there is, somebody will be there somehow mining for gold.  Some of the pick up trucks & ATV’s passing us had some pretty grizzled looking characters inside.  We hear there is a lot of ‘firepower’ here in these rocky cactus strewn areas.  Lots of ‘No Trespassing’ signs as well. 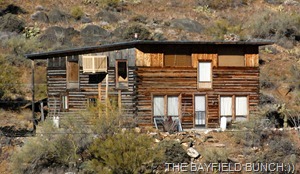 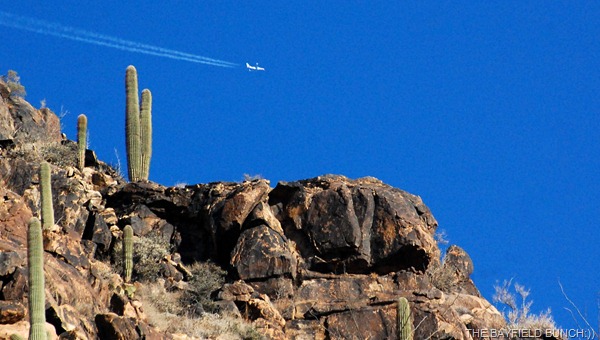 With no Petroglyphs to our credit we doubled back to Stanton for a drive through.  Seemed to be a lot more RV’s here than a month ago when we were here with Jean & Skip.  For a little old wild west history about Stanton, check out Jim & Sandie’s post over at WHERE ARE THE DIXONS TODAY.

THE NORTH SIDE OF STANTON ARIZONA…ORIGINAL BUILDINGS

Back in the wild west mining days an old trail linked the town of Stanton at the base of the Weaver Mountains to the town of Yarnell at the top of the Weavers.  This would have been the way travelers would have made their way from the desert lands to the south up the mountains to the higher grassy & treed plateaus of the north.  A stagecoach made this perilous journey & today the Bayfield Bunch made the same journey as well.

FROM STANTON OUR DESTINATION IS YARNELL, SOMEWHERE ATOP THOSE MOUNTAINS AHEAD

We picked up ‘Stage Coach Road’ in Stanton & began the slow climb to the north.  All the usual twists & turns & of course all the usual beautiful scenery.  The road narrowed at a few points where two vehicles could not have passed.  Somebody would have to back up.  And, some of those points had hair pin turns in them so you just kind of eased yourself around the corner watching closely for someone else easing themselves around the corner coming the other way.  Now, having said that, let me say, this is a great drive & I would recommend it to anyone.  The road was in good shape & can easily be done in an SUV or higher clearance car.  There are some bumpy spots but not bad.  No big rocks & no deep ruts.  Only one dry wash to go through & it’s no problem.  Of course that was today & I wouldn’t want to try the road after a rain storm or a heavy snow fall.  At the Yarnell side you can find this road just a few hundred yards south of the Road House Restaurant. 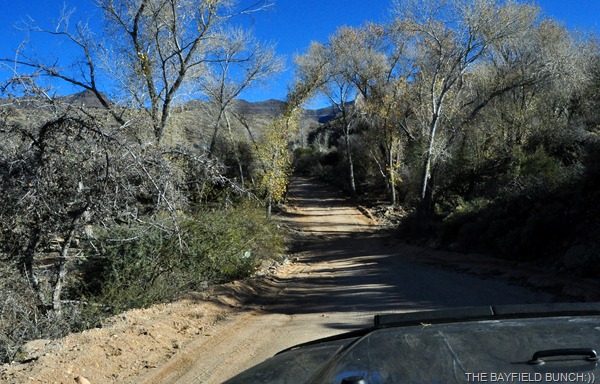 CROSSING THE ROAD’S ONLY DRY WASH 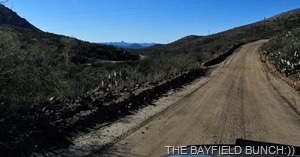 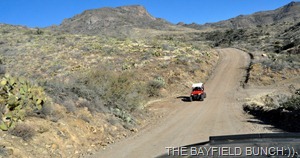 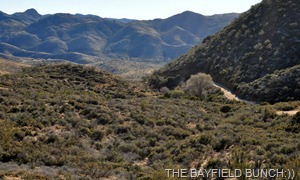 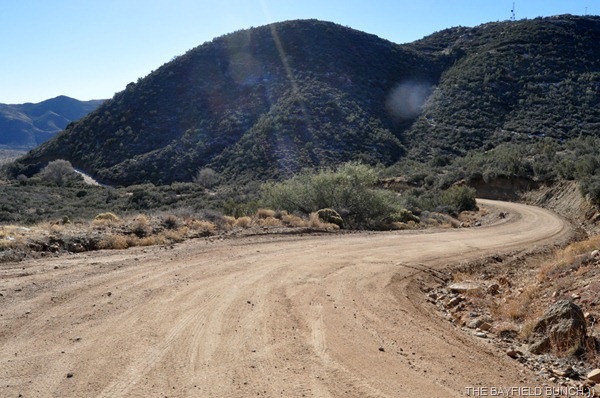 DESPITE A FEW BUMPS, A FEW NARROW STRETCH’S, & A BIT OF DUST, THIS IS NICE ROAD WITH GREAT VIEWS BETWEEN STANTON & YARNELL

And, it was the Road House Restaurant where we stopped for breakfast.  Been awhile since I had myself a good mess of bacon & eggs & the Road House sure did it up good.  Just the way I like it except they got my toast wrong.  Rye instead of Sourdough.  Not being a complainer of course (ya right) I happily chowed down anyway.  Definitely would recommend the bacon & egg breakfast here.  Kelly had a bowl of clam chowder which she also said was very good.  This is a popular place for travelers on the road between Prescott, Wickenburg, or Phoenix. 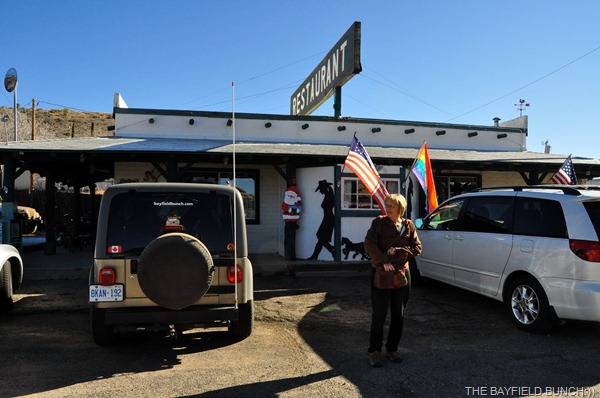 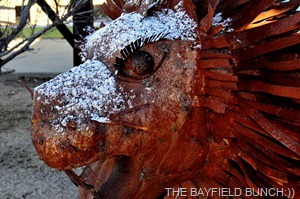 What’s a stop in Yarnell without something from the Yarnell Cornerstone Bakery so Kelly zipped in for some donuts.  From there it was a quick stop at the well known & slightly legendary hardware store for a paint roller. KELLY EXITS THE BAKERY WITH A COUPLE BAGS OF GOODIES 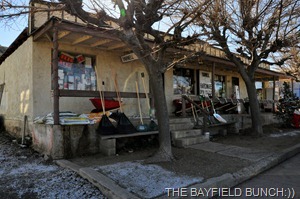 It was nearly noon & time to head back down the mountain to Congress.  Highway 89 is a newly paved winding road tumbling down the side of the Weaver mountains.  It is often referred to as the Yarnell Hill.  Well, it’s quite a hill.

WE BEGIN OUR DESCENT 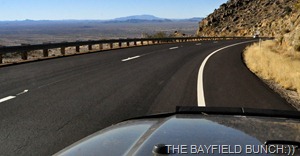 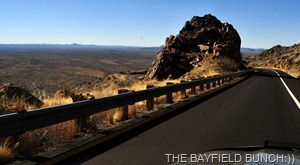 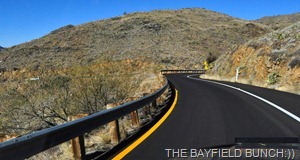 WE ARE BACK ON THE VALLEY FLOOR

A few weeks ago we received an email from long time readers & fellow RVers, Doug & Michelle from Kingman.  They were passing through the area on their way from Quartzsite to Prescott & wondered if we would be home today.  We would:))  Nice folks for sure & it was nice to meet them.  I’m always a bit nervous meeting new people but I could tell after a bit they were folks we would have things in common with & be comfortable with.  I like when that happens 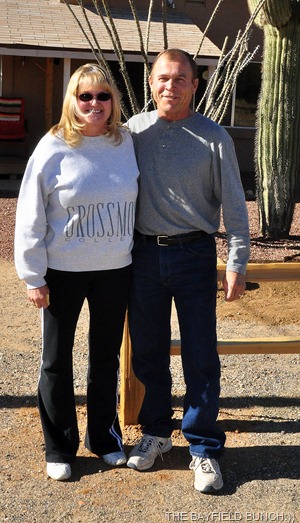 It was early afternoon before I checked our blog site & noticed that miserable Spam comment.  In deleting it I accidentally deleted a legitimate comment but was able copy & paste it from our Hotmail account back into the the comment section. 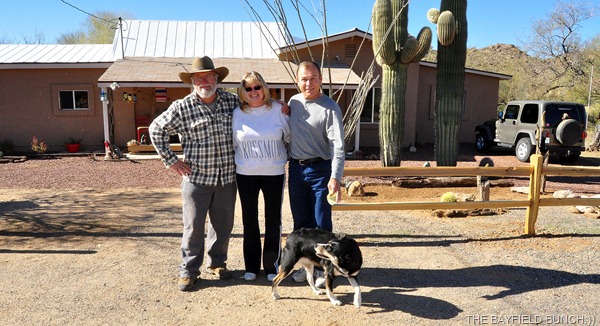 Rest of the day was quiet as I enjoyably began putting tonight’s post together…:)) 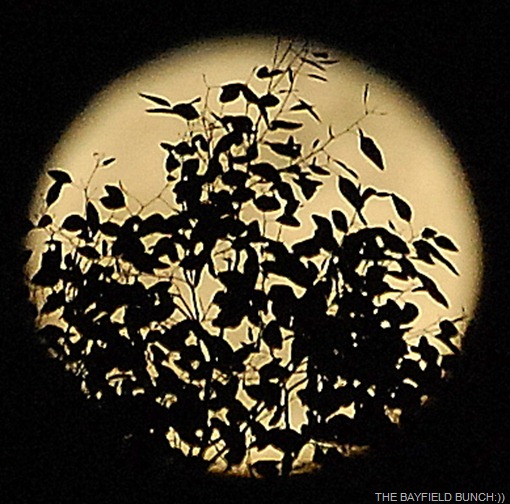 GROANER’S CORNER:((  Did you hear about the great new restaurant on the moon?  The food is excellent, but there's no atmosphere.

Q. What do you call a clock on the moon?
A. A lunartick.

Did you hear NASA wanted to study the effects of the moon on an aging individual, so they decided a few years ago to resend the late Neil Armstrong. Unfortunately, they canceled this because they were afraid the first words from the moon in 30 years would be: "Houston? I have fallen, and I can't get up."