AS SOON AS HE DUMPED THE CRUSHED STONE, I THOUGHT…..’OH OH’ 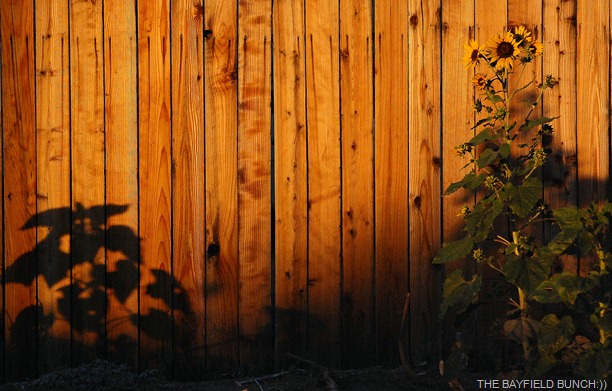 Had me one of those early starts today. Went to bed at 10 Wednesday night, woke up 4 hours later & that was it....I was up for the day. Hate when that happens. Finally made it out for a morning walk. Kelly & Pheebs have been out everyday but I missed a few mornings because of a bothersome right leg. 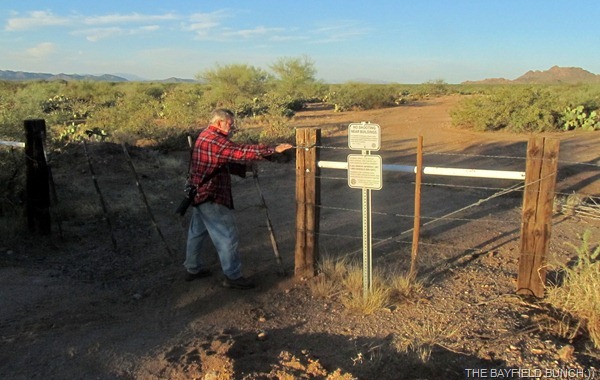 OPENING A GATE TO THE SONORAN DESERT THIS MORNING:))

A white dump truck rolled in about 8:30 this morning with our 8 tons of half inch crushed stone. Soon as he dumped it I knew we had underestimated how much we need & maybe the stone size itself. Next size up they will deliver is 17 tons. One more ton than Tennessee Ernie Ford sang about years ago. Turns out 8 tons was plenty for now because we're just not sure if we like the size. I put a small patch down in front of the porch to walk on for a bit, so we'll see. Pheebs walks around the patch of stones....not a good sign. I did spread some out along the house where I plan to plant Cactus. By the way, thanks to the folks who sent in gardening comments. Guess I better reconsider those Yellow Bells eh. Think I’ll get meself a ‘how to’ book on planting Cactamuses & other South-Western plants. 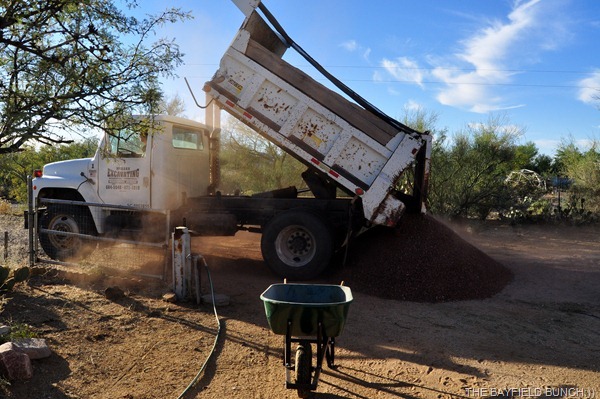 While cleaning up another room in the house today we found an old torn part of a yellowed Wickenburg newspaper. No date but there was an ad visible for Lewis Motors. An 'Oil Change Special' said oil, filter, & lube...$13.88. A couple cars for sale as well. 1985 Chevy Blazer...$4,495. A 75 Olds Cutless for $1,495. No idea how long ago that might have been but am guessing late 80's. 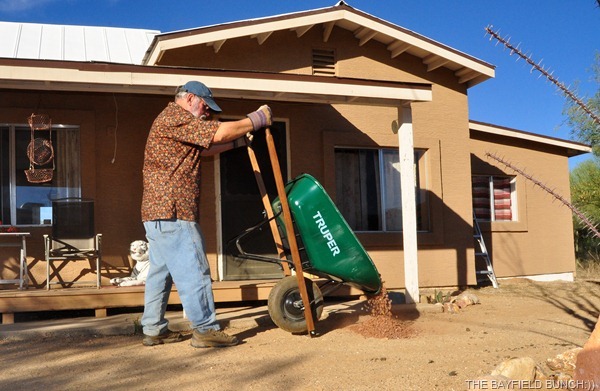 Thanks to Larry C & Hot Shot for letting me know I had duplicated a paragraph in my Wednesday post. I have since fixed that. When editing my finished post I sometimes re-position paragraphs by copy & pasting them. On several occasions I have forgot to 'cut' the original positioned paragraph. Shows you how short term my short term memory can be sometimes. Thanks guys:)) Maybe catch you in Congress next time Larry........ 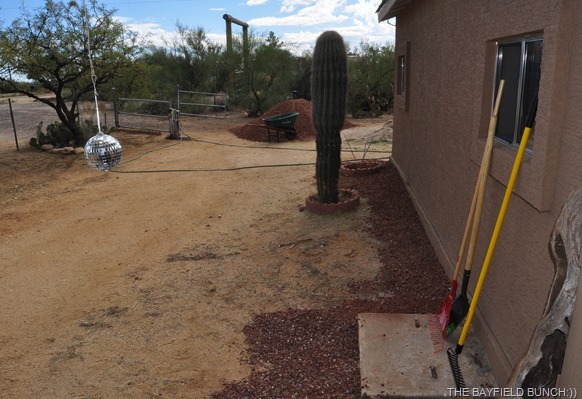 I WILL PROBABLY PUT VARIOUS CACTUS PLANTS ALONG THIS WALL

While standing in his undies, TOM got to see a swat team swing into action pretty much right in front of him. Hours later, he needed some blood work done....but it didn't have anything to do with the swat team or him being in his undies. 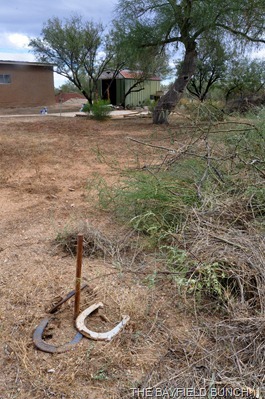 <<< YES, WE EVEN HAVE HORSESHOES IN OUR BACKYARD

The American Air Force was busy over Congress again today. I can hear fighter jets training up there but can't see em most times.  With today's heavy cloud cover moving in, some of them were down to the deck a few times in their high speed turns. Somebody with a turned up radio 3 blocks away bothers me but high speed jets overhead.....no problem:)) 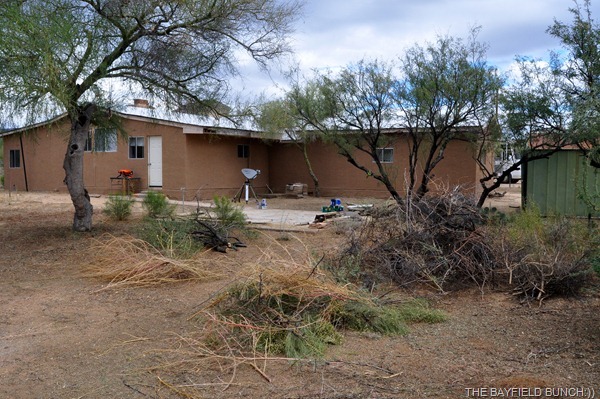 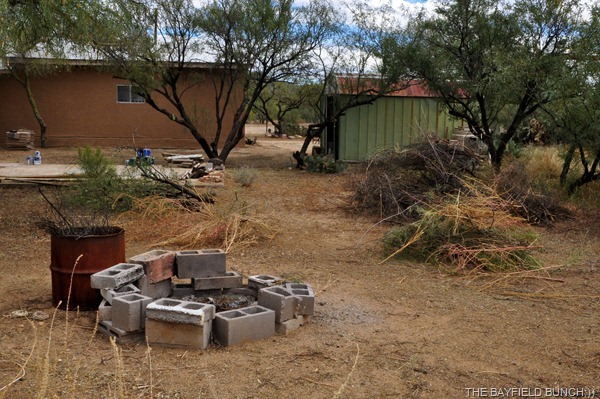 MY BACKYARD BRUSH PILES ARE GROWING

And again, just a reminder to folks on Facebook. Because I have been hacked, scammed, & slammed several times, I do not accept friend requests, game requests, birthday calendar stuff, or anything like that, etc. etc. I post my daily blog on Facebook & that's it. 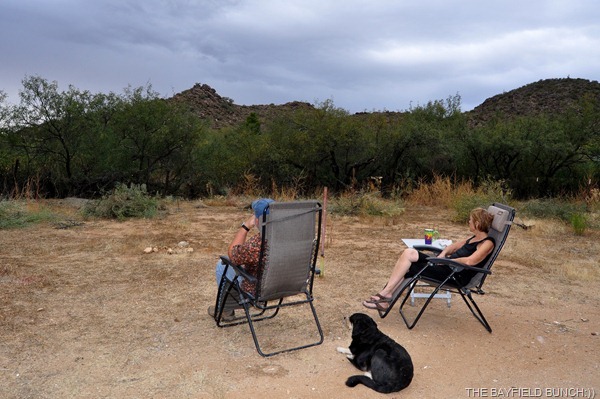 SITTING IN OUR BACKYARD WATCHING AN APPROACHING STORM THIS AFTERNOON 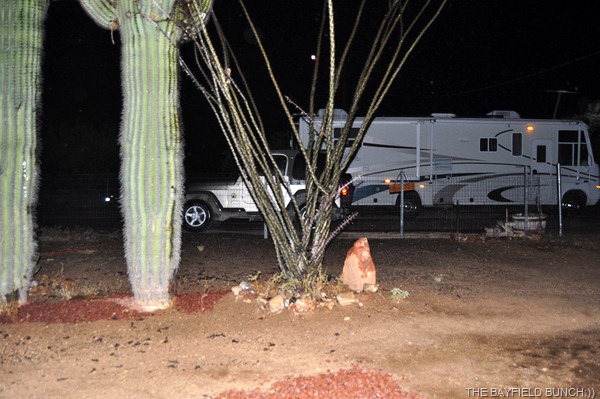