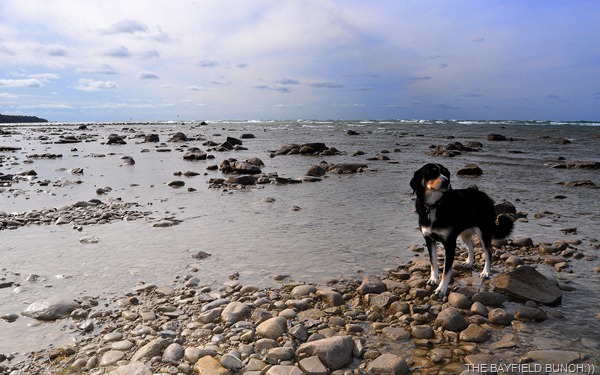 ‘STRAIGHTENED’ THE HORIZON‘ PLUS CROPPED’ BOTH BOTTOM & TOP OF THIS PHOTO, ADDED SOME ‘FILL LIGHT’ TO LIGHTEN THE FOREGROUND & THEN SOME ‘GRADUATED TINT’ TO DARKEN THE WASHED OUT SKY, PLUS I ‘SHARPENED’ THE PHOTO TO BRING OUT  SOME DETAIL

Tonight’s photos were all taken today & I am going to use some of them in this post to explain a few of the tool buttons used in the PICASA PHOTO EDITING program I & many fellow RV Bloggers use.  Each word under the photos has ‘these’ marks around them refers to a specific Picasa button, or tool.  Tomorrow night I will pick a couple tools & explain how to use them.  Tonight, it’s just photo examples. 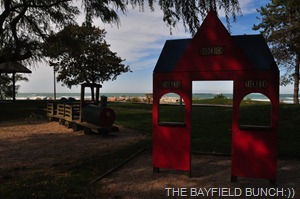 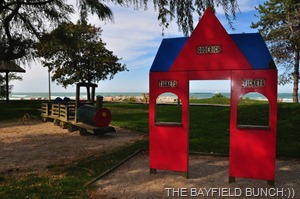 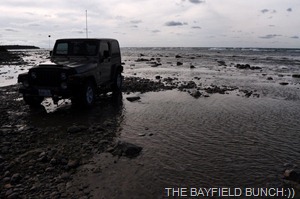 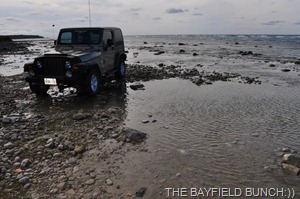 The little Peachy Princess & I headed off to Goderich this morning on a few errands. Split a Turkey salad sandwich & headed down to the beach & harbor area for a short walk. Our weather has turned much cooler & there was a stiff chilling wind coming in off the lake.  As I type this tonight it is pouring rain. 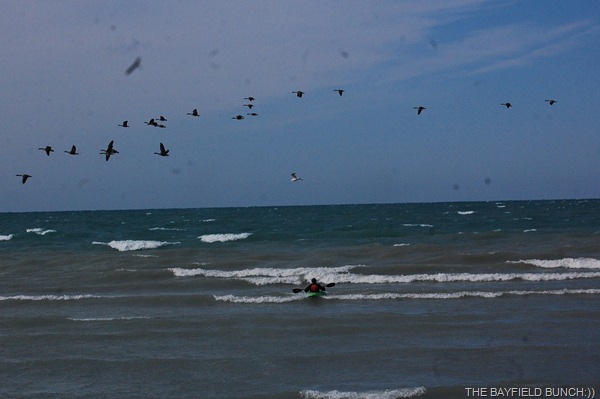 I CORRECTED THE ORIGINAL TOP PHOTO BY FIRST ‘STRAIGHTENING’ THE HORIZON, ‘CROPPED’ BOTH BOTTOM & TOP, ADDED SOME ‘HIGHLIGHT’ & ‘SHARPENED’ THE PHOTO… THEN WENT TO WORK WITH MY ‘RETOUCH’ TOOL TO GET ALL THE DUST SPOTS OUT OF THE PHOTO.  LEFT ONE SPOT IN UNDER THE LAST GOOSE AT EXTREME RIGHT…ALSO USED THE ‘RETOUCH’ TOOL TO COMPLETELY TAKE OUT THE FOURTH & FIFTH GEESE WHO WERE BUNDLED TOGETHER
We are at a point in our 'loading of the Motorhome ' now where decisions have to be made. Available space is filling up fast, so looking at the 'stuff for Arizona' pile in the carport I knew today that everything we had hoped to take with us is not going to go. No way I was going to get my electric roto-tiller in anywhere. Dropped my 'south-west brochures to Congress' idea. Too much weight & space involved. Deciding whether to take some gardening tools like a shovel & rakes, or just buy new ones when we get there. And, certainly no room to fit my trusty wheelbarrow in anywhere. Decisions, decisions, but I'm sure we will get it all worked out just fine. 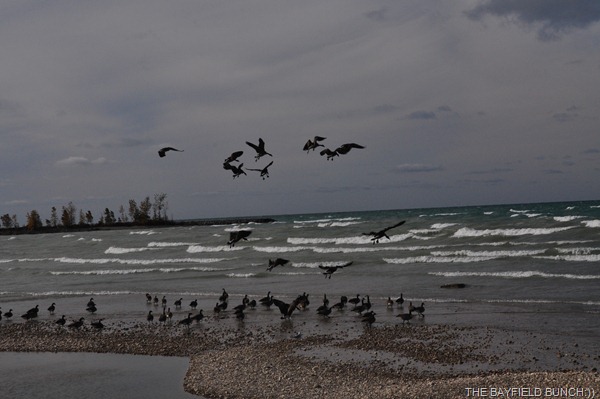 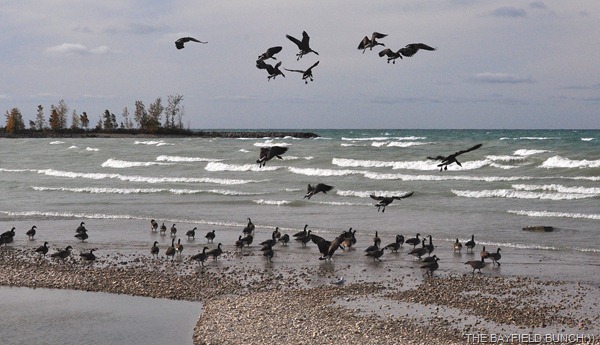 PHOTO ON TOP IS ORIGINAL & UNEDITED…WITH SAME PHOTO I ‘STRAIGHTENED’ THE HORIZON, ADDED ‘AUTO CONTRAST’ & ‘CROPPED’ A BUNCH OF UNNECESSARY SKY OUT.  ALSO ‘SHARPENED’ THE PHOTO A BIT

Kelly dug up some additional info on that house & property I had in Thursday's post. She found out there is an air of mystery & intrigue about it's recent past, and an explanation of why it has been sitting empty since August of 2009. First, this police report........ 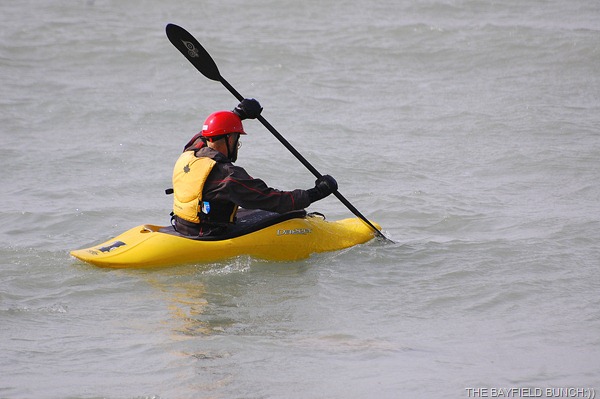 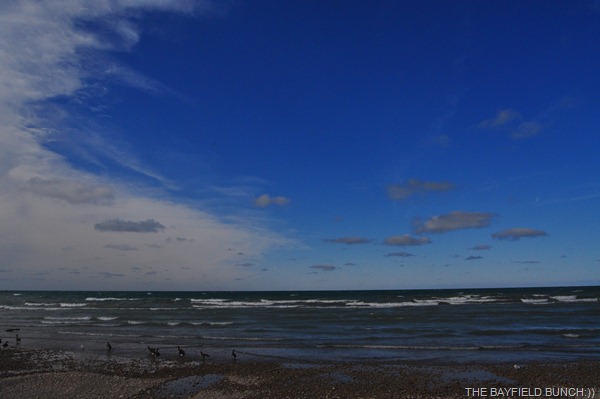 Kelly also found out by calling the nearby town of Wingham's District Clerk's Office today that the property is at this moment in the process of changing ownership. Clerk said she did not know if the house has been sold or is being defaulted back to a bank. When Kelly talked to the Realtor Thursday he seemed to be unaware of any sale & said he had been having trouble with the Toronto drug dealer who owned the property. It all seems to be in limbo right now.......... 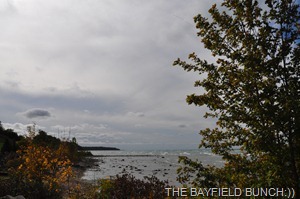 Angers me to no end to think low life drug peddlers in Toronto would come all the way out here into the peaceful countryside & buy up a beautiful 70 acre farm property to use for no other purpose than to grow, make, & peddle drugs. That explains the trash lying around & the obvious neglect to that property. If it was up to me I would have absolutely no mercy for those scum bag drug dealing #!!%(#:*#}*!! No doubt my photo of that cleared 10 acres in the post Thursday is where they were growing their marihuana . 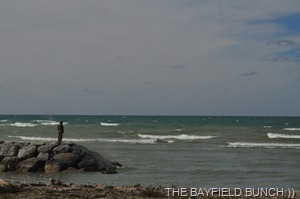 Over the next few posts I am going to include more photo examples of what you can do with Picasa’s free photo editing program.  I know one can do far more with the Photoshop programs but if your looking for a photo program that’s easy to use & doesn’t cost anything, I whole heartedly recommend Picasa. 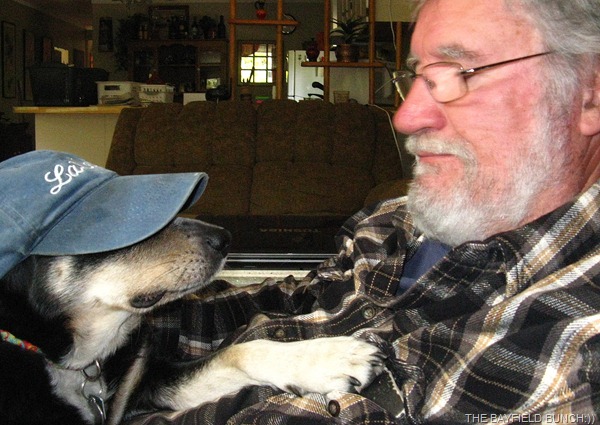 GROANER'S CORNER:)) Osama Bin Laden was living with 3 wives in one compound and never left the house for 5 years. It is now believed that he called the US Navy Seals himself.