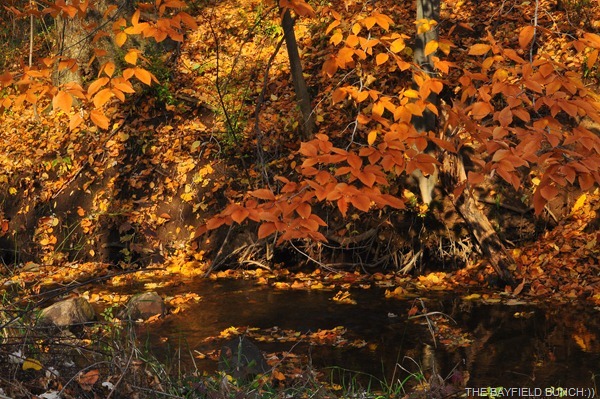 First thing to check this morning of course was the weather. With winds & rain heading for the area from the southeast & a rain front converging from the west we figure we’re probably gonna get ourselves wet Saturday no matter which way we go.  But, we have opted for the shorter route & decided to head for Buffalo & beyond. 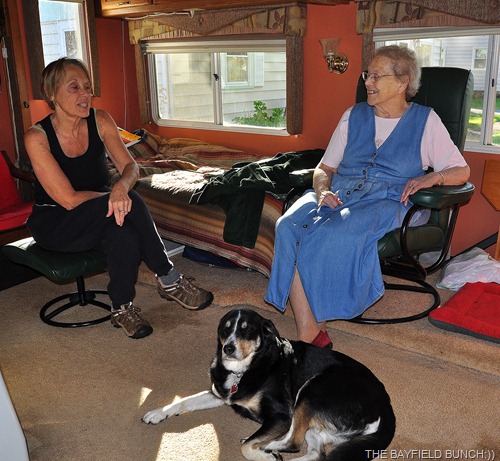 MORNING VISIT IN THE MOTORHOME 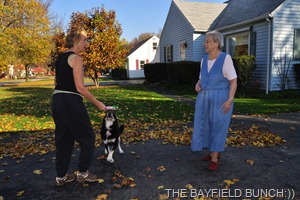 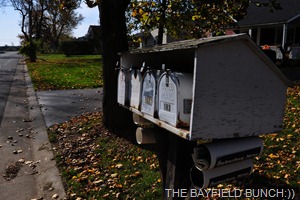 EVEN SOME OF THE MAILBOXES ON COLEMAN AVE HAVE SHELTER

With the possibility of rain starting later in the day or overnight, I decided to move the Motorhome off the grass & onto the paved driveway for an early morning departure. Hooked the Jeep on because I didn't want to have to do that in the dark or in possible rain come morning. Just get up, pull the slides in & boogie on down the road.

Busied myself checking solar battery levels & re-distributing the rig's load a bit this morning. Checked all 6 locks on our hitch assembly & everything's good there. I remember somebody trying to steal JANNA & MIKE'S Jeep off their Motorhome last December while on their way to Florida. 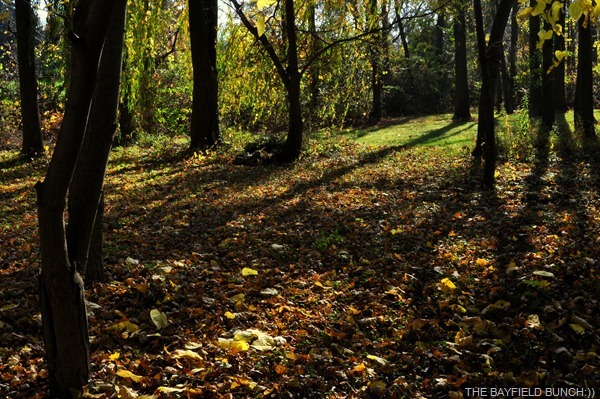 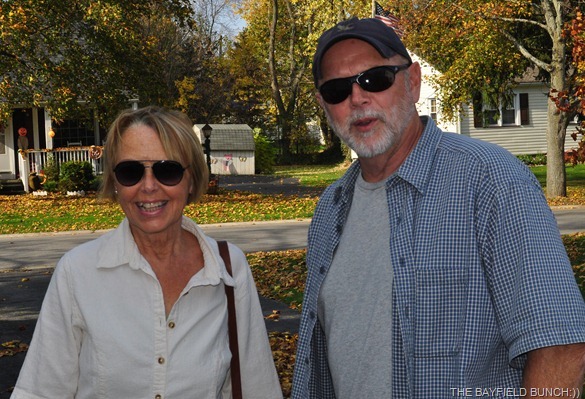 KELLY & HER BROTHER PETER
Kelly & her Mom did some rooting around in her Mom's attic for awhile.  Last two mornings in a row Pheebs has gone into the house & jumped up on Gene's bed smothering her in smooches trying to get her up. Pheebs & Gene have become quite the Pals. 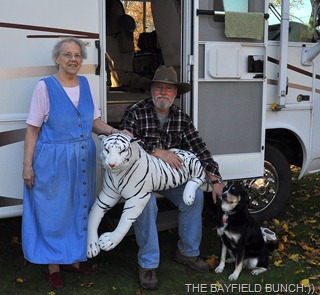 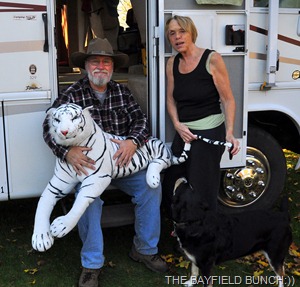 Knowing we were leaving first thing in the morning, Kelly's brother Peter & wife Leslie dropped over to say goodbye just after lunch.  They hadn’t been in our Motorhome since we rid ourselves of the uncomfortable furniture a few years ago so a little tour was in order. 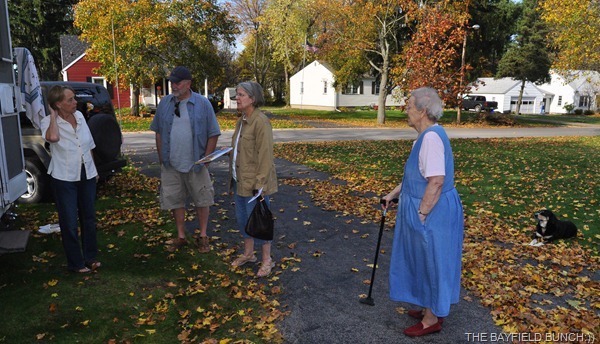 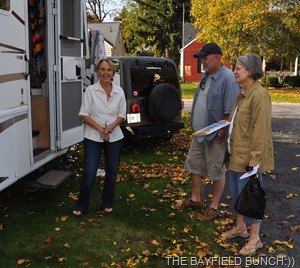 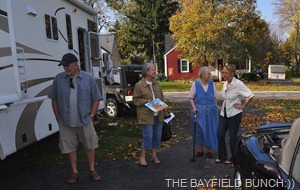 Kelly & Peter slipped out & brought back a couple huge great tasting Subs. Peter, an education Professor at Roberts Wesleyan College has spent the last couple days hosting Vancouver BC author Steven Galloway who wrote the book, 'Cellist Of Sarajevo'. (BOOK REVIEW) Peter set up a program at the College several years ago whereupon he selects a book for the school & community to read. He then brings the author to the College for a few days where lectures are given & the author is in attendance at the College's writing classes. Peter has taught at Roberts since 2008 & before that was Director of Education for Rochester New York. He is looking forward to his retirement this coming December. 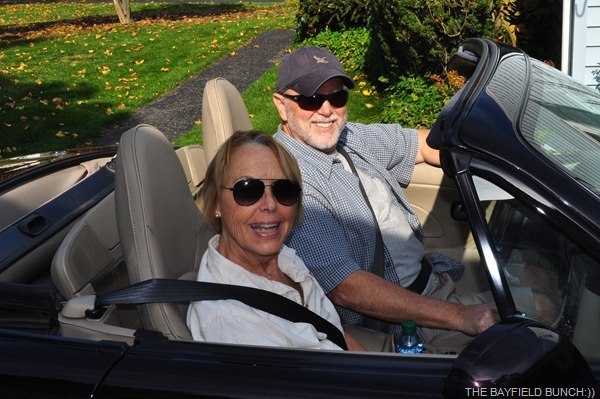 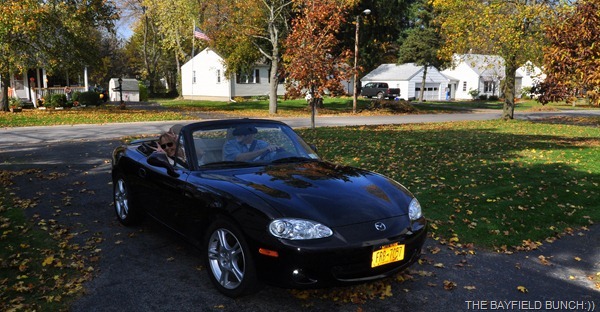 KELLY & PETER HEADING OFF TO GET THE SUBS…HEY, IS THAT A PEACE SIGN I SEE THERE

After re-locating the rig to the driveway & hooking on the Jeep, Pheebs & I took a last walk down around the creek.  I can understand why Kelly’s Dad enjoyed his time there. 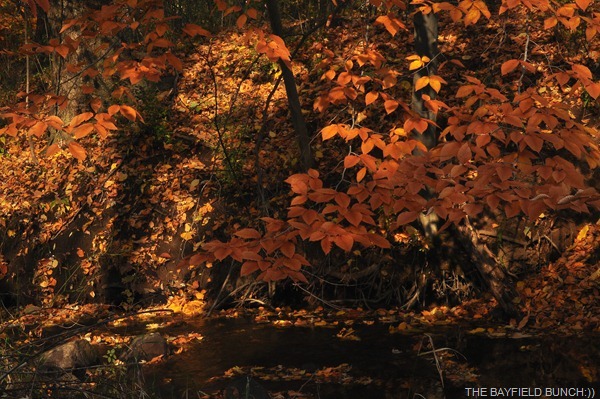 Kelly’s cousin Nathan & wife Lori dropped around to say good-bye.  Kelly later slipped out to bring some fish & chips back for a late night supper.  And…..more Abbotts frozen custard.  I think we are leaving here just in the nick of time or else both Kelly & I would have trouble fitting through the Motorhome door.  We normally do not eat so much, but this week just seemed to be right out of control.  For sure, we should not eat again until we reach Arizona!! 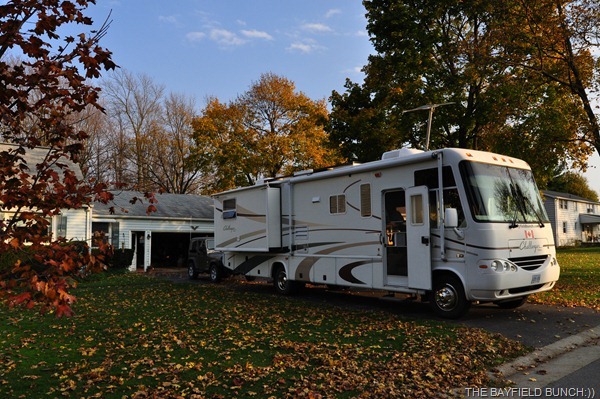 WE’RE READY TO ROLL FIRST THING IN THE MORNING

No idea where we will spend Saturday night.  Every travel day is different for us.  No rules, no regulations, no scheduled stops, no reservations.  It’s just the way we roll……….Westward Ho:)) 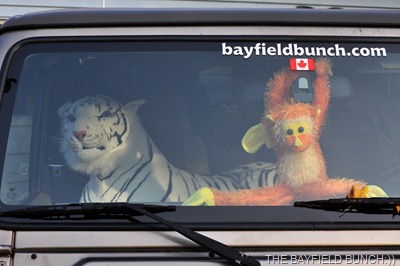 GROANER’S CORNER:(( A Russian, an American, and a Blonde were talking one day.  The Russian said, "We were the first in space!"  The American said, "We were the first on the moon!"  The Blonde said, "So what? We're going to be the first on the sun!"   The Russian and the American looked at each other and shook their heads.  "You can't land on the sun, you idiot! You'll burn up!" said the Russian.
To which the Blonde replied, "We're not stupid, you know. We're going at night!"