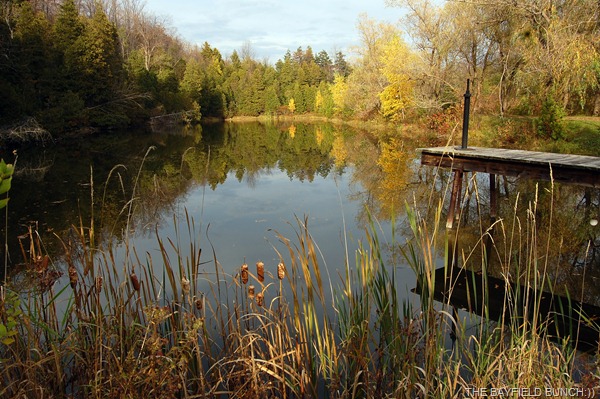 We have moved our departure date back from this Wednesday to this coming Saturday. We are kind of like the walking wounded here at the moment. Kelly with her bad cold & me with a painfully troublesome right leg that isn't easing up. Also, we don't want to take any of Kelly's cold germs with us when we go to visit Uncle Harry this week & we do not want Kelly's Mom catching anything when we get there either. Hopefully by the end of the week Kelly will be out of the woods & it really doesn't matter how my leg feels. I'll just throw it in the rig & bring it with me anyway. 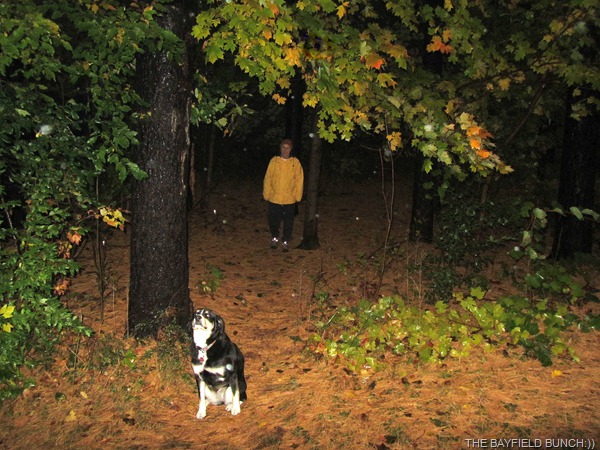 OUR MORNING WALKS HAVE BEEN A BIT ON THE SOGGY SIDE THE PAST COUPLE MORNINGS
Kelly spent quite awhile on the phone this morning with companies like Verizon, Hughes Net, the 3G Store, & several other internet type carriers & equipment places. Our house in Congress is in a Verizon fringe zone & we have been going around in circles trying to come up with a best solution for internet when we get there. There is a Verizon signal but it was weak so we were thinking of alternatives. Verizon assured Kelly today, changes to the towers have been made & we will see a change in signal strength when we return to Congress.  If need be, we will upgrade our older 3G Verizon Mifi to a new 4G Mifi. The more powerful 4G network will be in the Congress area very shortly, but in the meantime the newer 4G Mifi is still able to function with the older 3G system. We have our fingers crossed that this is all accurate information coming from Verizon. We're fine for TV with our Shaw satellite dish so the only problem left to solve is the very weak & poor cell phone coverage. And, it is the Canadian Bell Telephone plan cell phone connection Kelly needs because it is the Deer Park Lodge phone we carry. May have to push Deer Park a little harder for a necessary phone upgrade. The Samsung work phone Kelly now carries is about 5 years old.  We think a new more powerful techno-age phone could very well solve the weak cell phone connection we have in Congress, Arizona. 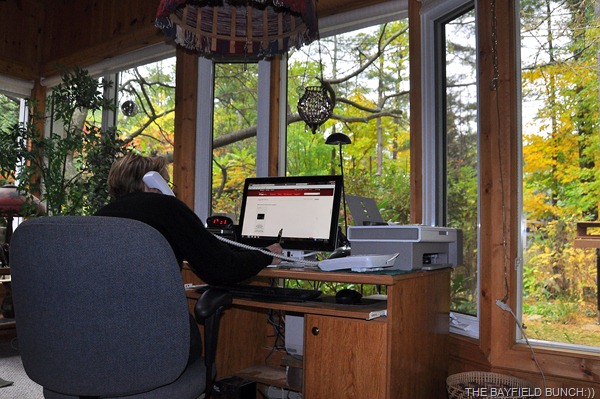 KELLY WORKS THE PHONES THIS MORNING
Spent most of the day in my recliner in hopes of totally resting my right leg. I have obviously pulled, strained, or screwed something up in my hip & thigh area sometime in the last few weeks. Had been doing a lot of landscape gardening & was up & down off the ground quite a few times so obviously something has been irritatingly wrenched out of whack. Not impressed with this rotten aging process!! 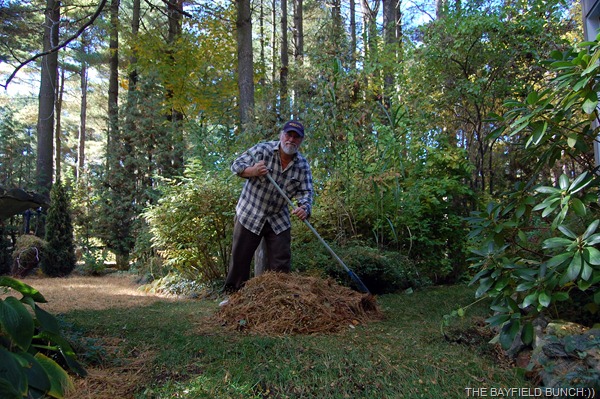 TIS THE SEASON TO RAKE PINE NEEDLES
Mr. Ed from the FLIP FLOP RESORT INN cleared up the mystery of the cell phone in the Hosta leaves with a follow-up comment today.  In it he said, “Look at the photo, the one on your blog site.  From left to right 3/4 to right.  Now top to bottom look down 1/4
In the opening of the leaves looks like chrome trim of an outline of a black phone laying sideways.  Looks like 3 sides”. 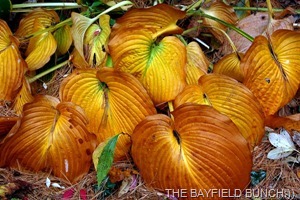 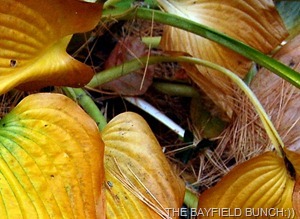 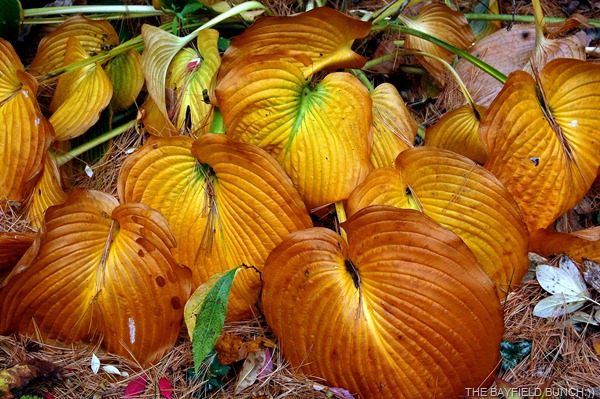 A FEW QUICK CLICKS OF THE MOUSE WITH PICASA’S ‘RETOUCH’ TOOL TOOK CARE OF THE REFLECTED FILL-IN CAMERA FLASH ON A STEM THAT LOOKED LIKE THE CHROME SIDE OF A CELL PHONE:))
Sometimes I hear the word ‘cheating’ when it comes to retouching a photo.  There is definitely two schools of thought when it comes this subject & no broad sweep of a paint brush can fill in a general answer.  Personally, I do not see it as cheating, but we are getting close to another age old question……what is art?  If I wake up in the morning & my hair is a mess, is it cheating if I comb it before going out in public?  A teen-ager puts a dab of Clearasil on a pimple to cover it up, is that cheating?  When I did that in high school I didn’t think I was cheating anyone, I just didn’t want to look like a Doink.  How about ladies putting on make-up in the morning before heading out….is that cheating?  Not in my books it isn’t.  If a photo contest specifies in it’s rules that photos must not be retouched, & a competitor does some retouching anyway, is that cheating?  Darn right it is!!  The rules specifically stated, no retouching.  Had I been on the ball with that Hosta photo above, I would have removed that distracting ‘hot spot’ that Ed thought might have been a cell phone, therefore eliminating any confusion.  Oh, & why was I in the doghouse on Sunday nights post? (photo)  Good question Donna…………..I can’t remember.   Well, that’s my excuse today & I’m sticking to it:)) 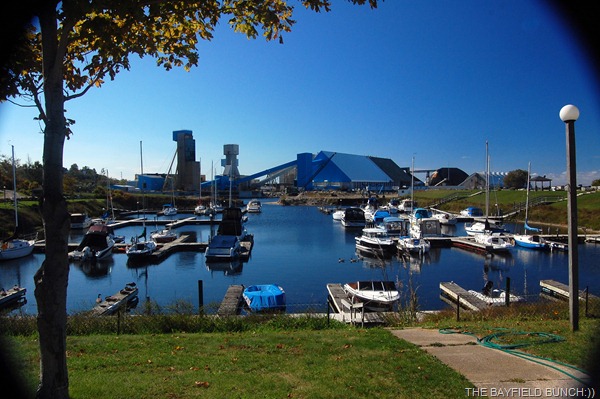 THE MISTAKE I MADE IN THIS PHOTO WAS HAVING THE WRONG LENS HOOD ON WHILE USING A WIDE ANGLE LENS WHICH CAUSED THE DARKNESS IN THE CORNERS
Know that when you see those super great photos of perfection in magazines or in those many emails & Power Point presentations traveling around the internet, most of them only look like that because of the many great photo editing programs available to everyone today.  And, you do not have to be a photographer to effectively learn & skilfully use any of these program.  But, ya do gotta have a mess of good smarts to understand them there mind twistin Photoshop programs all right!!  That’s why I don’t use them & stick with Picasa instead……………….10-4:))

GROANER'S CORNER:(( A 6-year-old and a 4-year-old are upstairs in their bedroom. "You know what?" says the 6-year-old. "I think it's about time we start cussing." The 4-year-old nods his head in approval. The 6-year-old continues. "When we go downstairs for breakfast I'm going to say hell and you say ass." "OK!" The 4 year old agrees with enthusiasm.
Their mother walks into the kitchen and asks the 6-year-old what he wants for breakfast. "Aw hell, Mom, I guess I'll have some Cheerios."
WHACK! He flies out of his chair, tumbles across the kitchen floor, gets up, and runs upstairs crying his eyes out, with his mother in hot pursuit, slapping his rear every step. The mom locks him in his room and shouts "You can just stay there till I let you out!"
She then comes back downstairs, looks at the 4-year-old, and asks with a stern voice, "And what do YOU want for breakfast young man?
"I don't know," he blubbers, "But you can bet your ass it won't be Cheerios!"
---------------------------------------------------------------
- Tourists see the world, travelers experience it.
- Home is where your pet is:))
- "If having a soul means being able to feel
love and loyalty and gratitude, then animals
are better off than a lot of humans."
(James Herriot)
- The pessimist complains about the wind; the optimist expects it to change; the realist adjusts the sails -William Arthur Ward
- The only thing better than right now will someday be the memories of right now...AL.
- It is not so much having nothing to do as it is not having the interest to do something....AL.
- OUR PHOTO ALBUMS - .https://picasaweb.google.com/117858411710794543295/
stargeezerguy@gmail.com
Posted by Al Bossence at 10/15/2012