I NEVER SET FOOT OUT OF THE RIG TODAY:(( 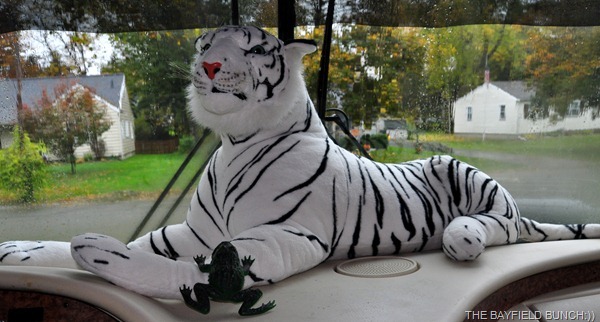 The relentless rains began at 5 a.m this morning & continued with noisy patter on our roof for the entire day. I am a little concerned because we are parked on grass & if the rain continues for a few days it could be a little tricky getting out of here. Long range forecast is for a sunny Friday but rains again Saturday. Might be a good idea to roll out a day earlier & leave Friday. We'll keep our eyes on the weather & play this one by ear.
---
Thought for sure last weekend this head cold of mine was on it's way out, but noticed Monday I was beginning to cough more & by Monday night the cold had gravitated to my chest. Went to bed feeling rough & woke up the same way. Never even got out of my pajamas for the entire day. Stayed inside where it was warm & dry & never set one foot outside the rig. 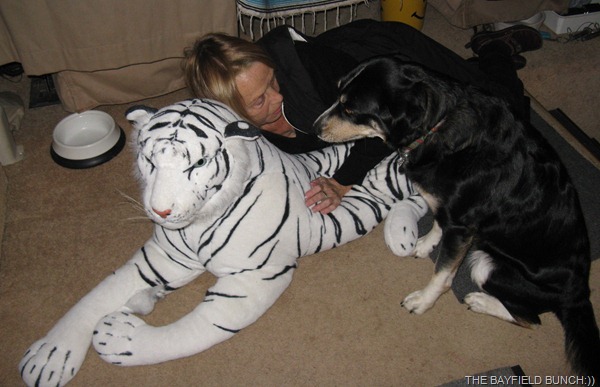 Now, to explain that big white Tiger sitting on the Jeep Monday night. Kelly had a couple coupons for ABBOTT'S CUSTARD & headed off downtown to pick up a couple Sundaes after supper. On her way back she spotted that big white Tiger by the curb & first thought it a dog. Garbage pick-up today & the Tiger was sitting beside a larger pile of garbage for this morning's pick up. Kelly went around the block, stopped & immediately rescued the Tiger by stuffing it in her Mother's car. When she got back she set the Tiger on the lawn, came in & told me there was a big cat outside. I thought she meant a big domestic cat so I didn't bother getting up. She said Pheebe was outside playing with it & took a camera out to take a picture. Later, when I uploaded the pics to the computer I saw the big 'cat' on the Jeep. So now, we have a new Mascot for the Bayfield Bunch & as I'm typing, the big Tiger is sitting on my bed right beside me in his warm, safe & dry new home.  Gonna have to think of a name for this little Kitty. 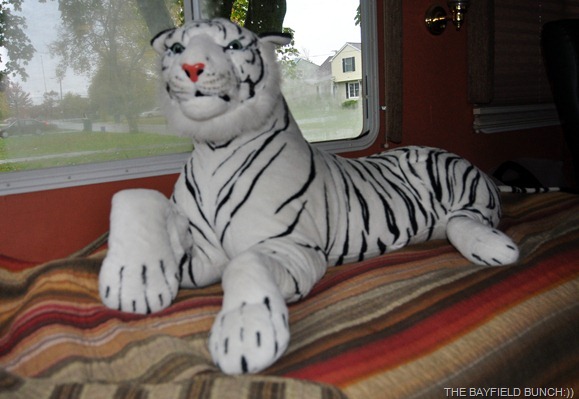 Not much to write about today. I think the last time I spent an entire day inside was when I was a kid. My time today was divided between the computer, blowing my nose, playing with Pheebs, coughing, & watching television. Not much to watch on the dozen channels our aerial pulls in but I did try to watch some old dusty westerns. Gunsmoke, Bonanza, The Wild Wild West, Big Valley, & The Rifleman.  I remember them as exciting shows at a time when I was a lot younger.  They just don’t seem to hold the same kind of magic anymore they once did.  But, not much on the other 11 channels so kinda watched them between snoozes anyway.  Kelly brought me some beef stew from the house & slipped over to the Pharmacy & picked me up some more cold medication. I have my fingers crossed this is still just a lingering cold & not the same bacteria infection Kelly had. She finishes the last of her prescribed anti-bacteria pills tomorrow & is doing much better than a week ago. I'll see how things shape up tomorrow.

We were invited over to Kelly's brothers place for supper so Kelly & her Mother kept that appointment. Pheebs stayed home to look after me & the new Tiger. Kelly had to sew up the big cat’s leg where it was loosing some of it’s stuffings.  With our green frog on the dash & orange Monkey in the Jeep, we are beginning to look every bit like a real traveling circus………. Groovy:)) 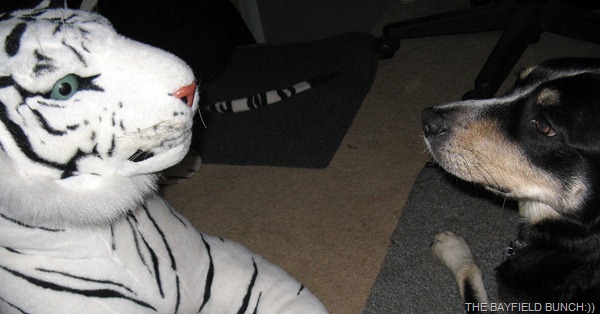 KIND OF REMINDS ME OF THE SONG…’GETTING TO KNOW YOU’

GROANER'S CORNER:(( One summer evening during a violent thunderstorm a mother was tucking her small boy into bed.
She was about to turn off the light when he asked with a tremor in his voice, "Mommy, will you sleep with me tonight?"
The mother smiled and gave him a reassuring hug. "I can't dear," she said. "I have to sleep in Daddy's room."
A long silence was broken at last by a shaken little voice saying, "The big sissy."