“ARE YA GEOGRAPHICALLY CHALLENGED,” he said….:(( 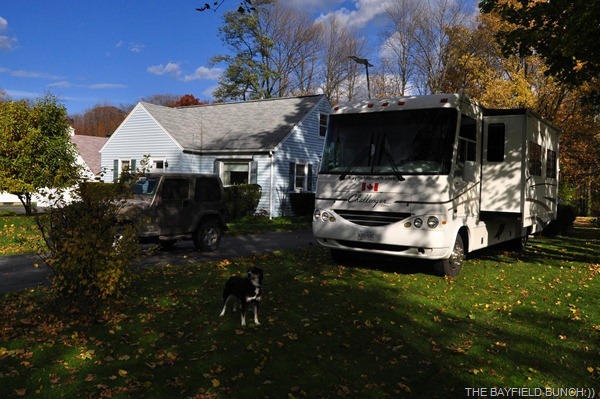 WE ARE IN SPENCERPORT NEW YORK:))

We had the big wheels rolling at 8:05 this morning & you know I don’t have to tell you what a great feeling that was. At last, at last:)) 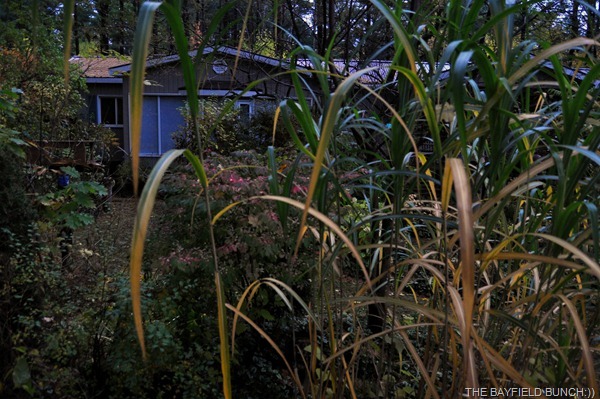 A LAST PHOTO OF OUR HOUSE AS WE PULL AWAY

Roads were wet but at least the rain had ended. Cloudy skies with a bit of mist on the surrounding horizons. Kept a close eye on things for the first few miles checking to see everything was running & towing right. It was, but again, I could tell we were on the heavy side. Great to be back in the driver’s seat once more watching all the beautiful scenery sliding by the window. Didn’t take long to get all the cobwebs out & back into the swing of driving a Motorhome. Just comes natural I guess. 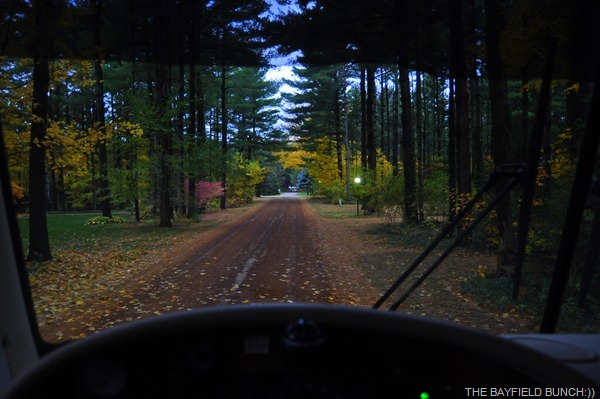 AFTER NEARLY 7 MONTHS', THE BIG WHEELS ARE ROLLING AGAIN:))

About 9:45 we hit ourselves a big blast of gorgeous sunshine just west of Brantford Ontario & it was sunny for the whole rest of the way. Been awhile since I've mixed things up in the heavy traffic department but it was just like the old days when I used to do that for a living for awhile.  Like riding a bicycle…..one never forgets.

We were half an hour in the traffic line-up at the border & we were both surprised at how easily we got through. The border fellow hardly had any questions for us before handing our Passports back with a "have a safe trip." I almost said, "hey wait a minute, we're used to way more questions than that Mister". Ya right!!. 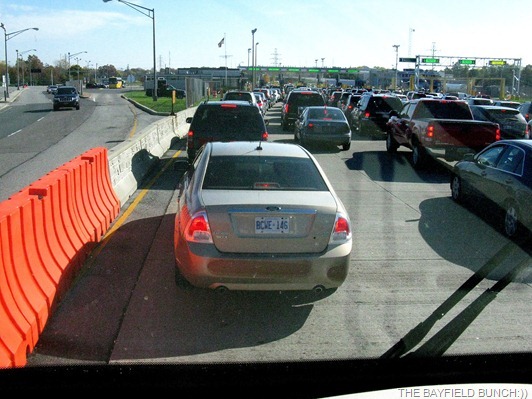 ABOUT A HALF HOUR WAIT AT THE BORDER

Soon as we crossed the border we headed up onto the Robert Moses Parkway. Kelly had never travelled this way to Spencerport & back before & we heard it was a nice scenic drive along the southern shores of Lake Ontario. And, with all the fall colors it was indeed scenic, & would have been even more scenic had we drove the full length. But, we had a problem. 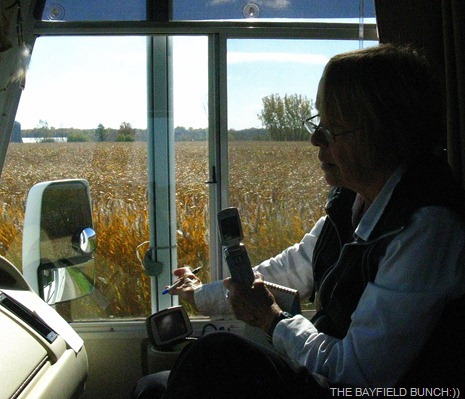 I had miscalculated our gas. Knowing we were on the heavy side this trip we did not leave Bayfield on a full tank of gas. Figured we had enough to reach the border, which we did, but hadn't figured on not finding any gas stations along the Parkway. Wasn't long before our gas gauge was into the red zone. It was Sunday & the few little towns along the way, if they had a gas station, were closed. Reached the little town of Kuckville & the 'low fuel' audible buzzer came on. Pulled off to the side of the road & for only the second time in nearly 8 years of RVing I had to haul out our big spare can of gas. About a 5 gallon can I'm thinking. Very heavy to lift & hold while pouring gas in. But, it saved the day. YEP, STARTING TO LOOK LIKE A DIRTY OLD JEEP AGAIN

Retraced our steps for a few miles back as Kelly plotted us a new route & headed south in an effort to find a larger town with gas closer to Kelly’s familiar route. Stopped at a farm's roadside Pumpkin stand & picked up some directions. Problem was we had to get over the Erie Canal & not all bridges were big enough for a Motorhome. Those directions sent us off in a direction which brought us to a T-intersection. Which way, which way?? An old tumble down house stood on the other side of the intersection so Kelly walked over & knocked on the door. Young fellow came out, talked for a bit then walked up to my window, looks up & says, "are ya Geographically challenged". "Yep", I said, "sure am". He gave us a few new directions & 10 minutes later we were in the town of Medina at a Sunoco station filling up the rig......and, empty gas can. Not one of our better RVing afternoons I can tell you, so we just gots to gets our travel heads back on a little tighter.......10-4. 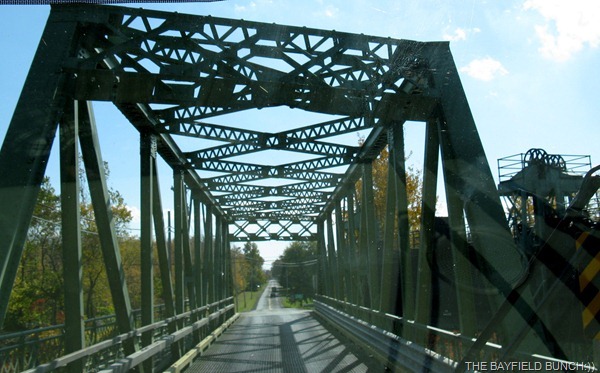 Rolled into Spencerport about 3 p.m. & by 3:20 we were parked on Kelly's Mom's lawn out front the house....exhaustamacated. Well, pretty tired at least. It had turned out to be a 7 hour driving day. Not unusual for us but we will have to work at getting ourselves re-tuned & up to speed. 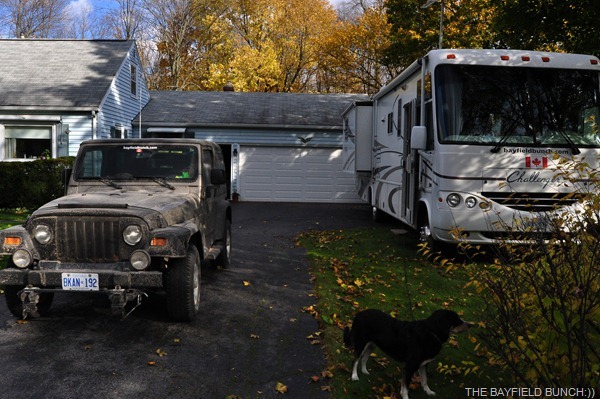 OUR HOME FOR THE WEEK

Nice to see Kelly's Mom again. I hadn't seen her for about 4 years. Kelly's Brother Peter & his wife Leslie brought pizza for supper & we finished everything off with Abbott's ice cream. Groovy. No idea what's happening with Monday but we'll deal with that when we get there. zzzzzzzzzzzzzzzzzzzzzzz 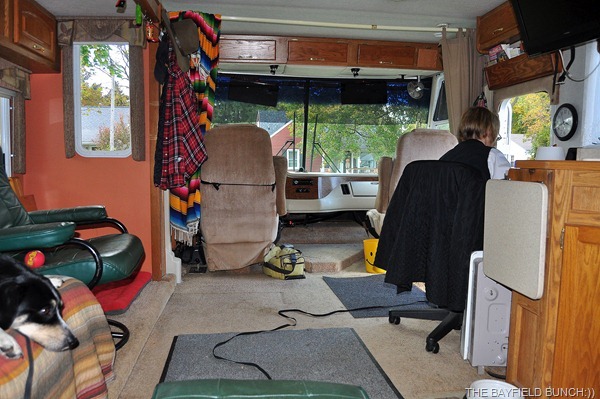 YEP, WE’VE GOT A BIT OF RE-ADJUSTING TO DO THIS WEEK

GROANER'S CORNER:((  An elderly Floridian called 911 on her cell phone to report that her car has been broken into. She is hysterical as she explains her situation to the dispatcher: "They've stolen the stereo, the steering wheel, the brake
pedal and even the accelerator!" she cried.
The dispatcher said, "Stay calm. An officer is on the way."
A few minutes later, the officer radios in. "Disregard." He says. "She got
in the back-seat by mistake."