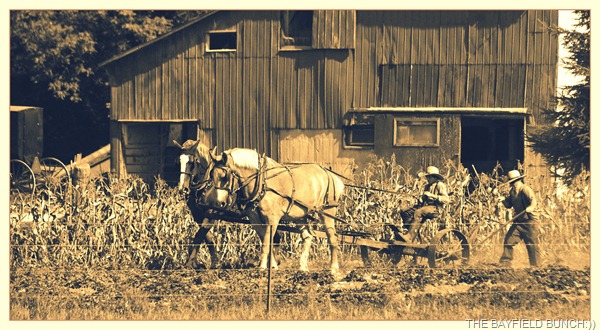 THE WAY THINGS WERE DONE IN THE OLD DAYS

Wandered around for awhile this morning waiting for the great squawking bird of enthusiasm to alight on my shoulder & spike my day.  No bird came.  Figured I’d fire the bike up for a run but the sad little face sitting by the gate changed my plans.  Minutes later Pheebs & I hit the road for a 2 hour Monday morning country road Jeep tour.  She loves riding in the Jeep & is as good as gold when it comes to traveling.  Split a hamburger at a roadside restaurant in the little hamlet of Auburn.  Later stopped for a few photos, a stretch, & we were back home before noon.  Just as well, it turned hot & muggy again:((

Mark & Bobbie have themselves some excitement going on over at the Box Canyon Blog.  I'll give you a couple hints....'Bobbie thought it was easy to drive and that it rode nice''. Mark said, 'it didn't feel any bigger than Petroleous Rex'. Better slide on over & check out GOLDILOCKS:))
---

Yes, I know loading up some clothes & stuff into the rig 6 weeks before we leave is waaaaay on the early side but it is the psychological lift it gives me & that is the important part. A nice travel feeling for the moment. When one is as travel oriented as I am, one grasps at as many travel straws as one can. 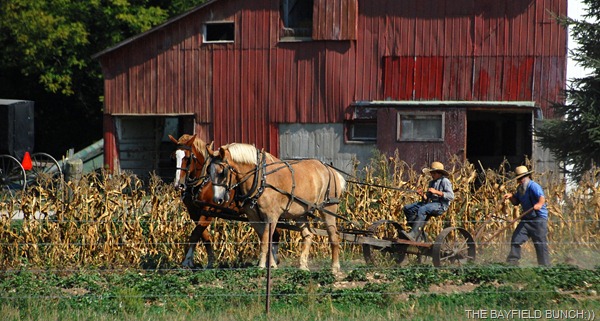 AND THE WAY THINGS ARE DONE TODAY AS WELL………………….PHEEBS & I SPOTTED THESE HARD WORKING FELLAS & THEIR HORSES THIS MORNING

GROANER’S CORNER:((  Two fellers were in desperate need of cash, but admittedly were a bit cowardly.
So the one suggested they break into the Amish market.
The logic being that since the Amish were non-resistant, even if they were caught, no harm could befall them.
Thus they carried out their plot.
However, just as they were breaking into the cash register, the owner turned on the lights and confronted them, a shotgun pointed directly at them.
Calmly, the Amish man said, Boys, I would never do thee any harm yet you are standing where I am about to shoot.