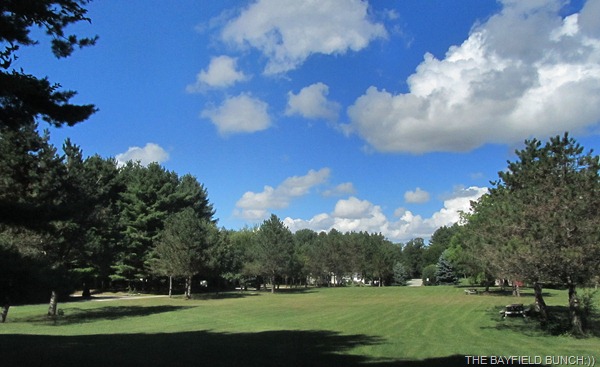 Living only a mile from Lake Huron we are accustomed to small rain showers sometimes forming up out over the lake & traveling inland. Maybe only 20 minutes or so & that is what we had on our morning walk. Just a nice light rain shower but it was Pheebs who drew my attention to it. Walking just ahead of us I could hear her softly humming a song to herself by B.J. Thomas from the movie, Butch Cassidy & The Sundance Kid............ Raindrops Keep Falling On My Nose:)) 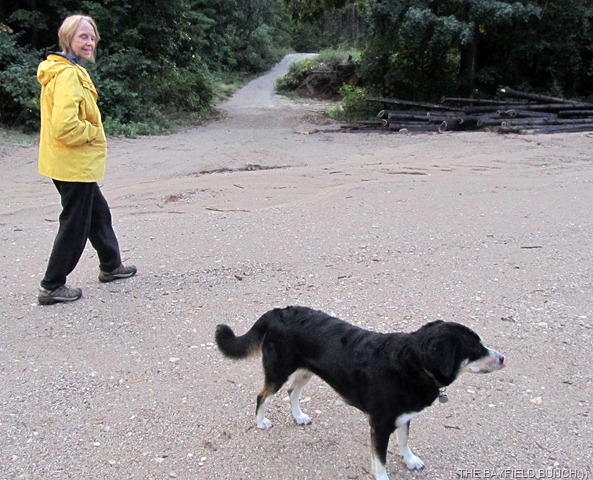 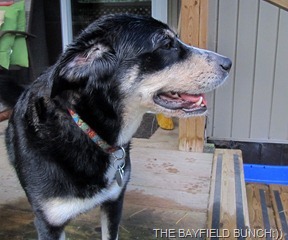 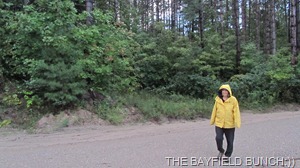 Our rainy morning was over by 10 as clouds gave way to morning sunshine.  Hadn’t had the bike out for a couple weeks & as expected, it didn’t fire right up.  Our colder nights had run down the battery a bit so it was out with the battery charger.  An hour later I was cutting through sunny but cooler morning air to give the bike a run.  A stop at Tim Horton’s in Goderich for a decaff coffee & I was on my way home again.   Nice:))

We have a TV show here in Canada called, Market Place. Similar to the 60 minutes type of show they go after scam artists, fraudulent business owners, etc. I enjoy these types of programs that have the courage to deal with real issues & real people. And, they are not afraid of the big drug companies. Just this week we watched Market Places' program on the harsh & terrible realities of the drug, Oxycodone. This morning I noticed a post from Mike over at PHANNIE & MAE that dealt with this drug on a first person basis. This is a must read for anyone taking or thinking of taking Oxycodone!!  About 5 years ago I was in severe pain from an old back injury.  A friend gave me an Oxycodone.  It made me sick & turned me into a Zombie for a day.  That was my one & only experience with Oxycodone & that was enough!!

There is just something about typing that I enjoy. Always have. I remember my first typewriter. It was a huge metallic monster kind of thing & weighed about as much as small foreign car. Bought it from a lady in Toronto back in the late 60's. Something about getting that white piece of paper lined up & rolled in made it all seem important or something. Probably saw Walter Cronkite doing that on television one time. All manual keys on that machine & no electronics. The typewriter was shiny black & I remember the keys were round. Long thin arms on each letter carried them from the carriage to the paper with a loud thwack. I had learned to type in high school so I could get those thwacks almost sounding like a staccato machine gun at times. Of course the faster I typed the more I had to stop & pry apart jammed metal arms too. But, I loved this old typewriter & would sit up late some nights just a hammering away on it. And, what did I write about??

Well, that was my poetry & short story phase & I can tell you it is very rare for me to go back & embarrass myself by reading any of that stuff now. Still have it somewhere though.  But, no matter, I just liked to drag out my old typewriter some nights & hear the clack-clack-clack of keys striking paper. Wonder how many people remember a computer communication program about 10 years ago called ICQ. Kind of similar to Microsoft Messenger & Yahoo chat etc. The program had a feature you could turn on that gave you the sound of typewriter keys striking paper. I loved that & always had it turned on. Late at night in the old farm house I would have the lights turned down & the volume turned up.  Kelly, already in bed, would  holler, "turn that typewriter sound down will ya"!! Well, I did turn it down......but only a little:)) 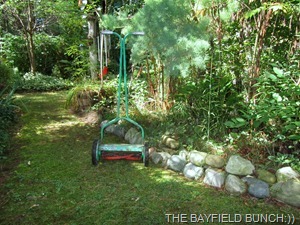 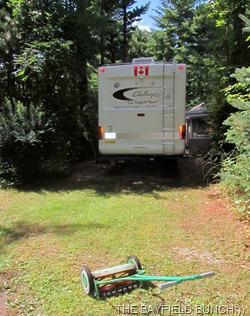 Reading GYPSY'S post this morning I was reminded of why Kelly & I decided early on in our RVing days not to try our hand at working on the road.   Kelly spends 6 & 7 months each year dealing with the retail public & all the stress that goes along with that. I had my share of that aggravation for a few years back in the mid 80's. Neither one of us has ever wanted to be bound by commitments, time schedules, rules or regulations while traveling. Yes, like many other folks, we could definitely use the extra income, but at what cost. RVing for us has always meant freedom of choice. Our choice, not somebody else's.  I remember how we talked about different types of working scenarios on the road & the one thing we totally agreed on was that it would never include working & having to deal with the public. Figured as long as we had a couple extra dollars in our pocket we would try to hang onto our way of doing things.  Figured as long as we could come & go as we pleased & kept our people contact to a minimum, our loner RV lifestyle just might end up being everything we hoped it would be. And, it has:)) We did enjoy our Ranch sitting days at Jeanie & Ray's near McNeal Arizona the past 5 years with one of those years on another property for security purposes. But, there was a difference with that. We had no public to deal with & we had our quiet out of the way privacy. Nice:))

Gypsy, in her post, also touched on another topic that is close to the heart of all Bloggers out here. Just soooooo many blogs to read. Both Kelly & I have cut our blog reading way back. Times have changed & are still changing from just a year or two ago when I spent a lot of time reading & commenting on fellow RV'ers posts. This past year & especially the past 6 months I have cut way back on my daily reading & commenting by about 80%. I still have a few blogs I read every morning & others I drop in periodically to see how folks are doing. I have narrowed my reading down to a few friends & RV folks with 'interests' akin to my own. No point in me trying to read through somebody's tour of a Marmalade factory in downtown Baltimore. Probably nice folks writing the blog but my interest just isn't there. 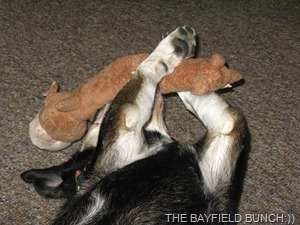 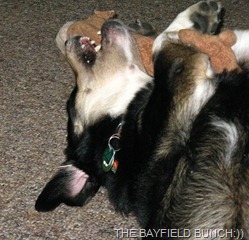 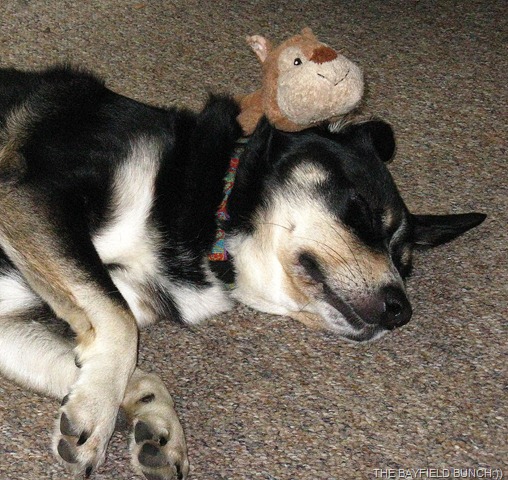 NO, I DIDN’T POSE LITTLE SQUIRRELY FOR THE PHOTO, THAT IS EXACTLY HOW THE 2 OF THEM ENDED UP AFTER THEIR PLAY TIME:))

Also, reading Donna's post from TRAVELS IN THERAPY I was again reminded of something else important to all RV folks.  Always lots to read about the positive, fun, & exciting times of RVing whether it be full timers, part timers, or week-enders. Not too many posts about the day when all that comes to an end. 'Coming off the road' awaits all of us in one form or another one day. Donna blogs about some of the reasons & realities her & Russ are facing right now.

And, lastly but not leastly, George, over at OUR AWESOME TRAVELS left the following comment on our blog this morning....." Dumb things just seem to happen sometimes, like me flooding our coach with black water, not once but three times"!   ……………… Say, d'ya suppose maybe if we all got after George, he just might write a post telling us, in detail of course, exactly how he did that:))

And, be sure to check out this PANTOMIME CLOCK. 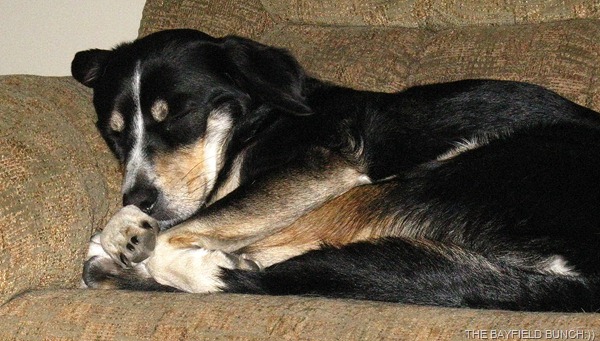 GROANER'S CORNER:((   As a young minister, I was asked by a funeral director to hold a grave-side service for a homeless man, with no family or friends, who had died while traveling through the area. The funeral was to be held at a cemetery way back in the country. This man would be the first to be laid to rest there.

I was not familiar with the backwoods area, and I became lost. Being a typical man, I did not stop for directions. I finally arrived an hour late.

I saw the backhoe first, then spotted the crew eating lunch. The hearse was nowhere in sight. I apologized to the workers for my tardiness, and stepped to the side of the open grave where I saw the vault lid already in place.

I assured the workers I would not hold them long, but it was proper to offer a eulogy. The workers gathered around, their sandwiches in hand. I poured out my heart and soul.

As I preached the workers began to say "Amen," "Praise the Lord" and "Glory." I preached and preached like I'd never preached before, from Genesis all the way to Revelations. I closed the lengthy service with a prayer and walked to my car. I felt I had done my duty for the homeless man and that the crew would leave with a renewed sense of purpose and dedication, in spite of my tardiness.