PHEEBS & I TAKE THE MOTORHOME FOR A SPIN 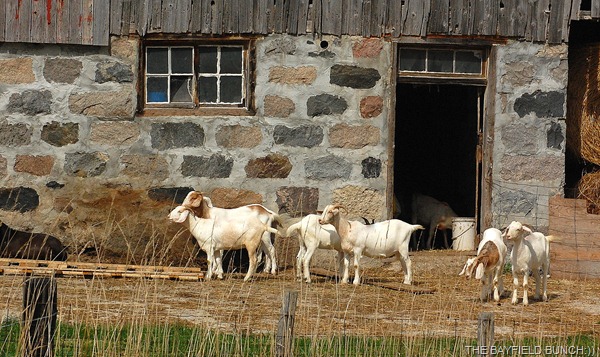 How nice to be rolling down the road in our Motorhome this morning. Still 5 weeks away from our departure date, Pheebs & had the rig out for it's monthly summer run. With a bit of luck, the next time I back the rig out of it's spot here, it won't be back for another 6 months or so. Forgot to pick up a prescription in Goderich Thursday so little Muffin Face & I cruised on up to Walmart.  While there, we picked ourselves up a new set of seat covers for the Jeep. A bit of gas & topped off the propane tank. Also stopped at Bayfield's STORMRUNNER on the way home. Harry easily replaced a worn out torsion bar on one of our bin doors & I was on my way again.  Yes, I did try to change it myself but I think I must have been using the wrong end of the hammer or something………. 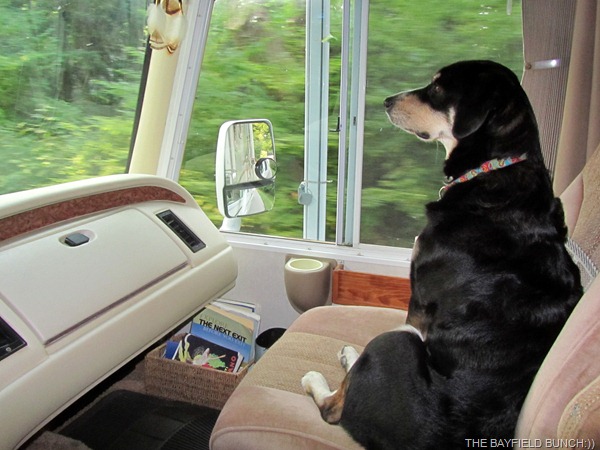 It was while taking out the old seat covers & putting the new ones on that I finally found our small triangular shaped 'off-roading' fluorescent orange flag that mounts atop our whip aerial on the back of the Jeep. Been keeping an eye out for that all summer & found it on the floor behind the passenger seat under a coil of heavy rope. Right where I had left it of course. While back there I figured I'd better get the vacuum out & do the Jeep's interior. Another job off the list. 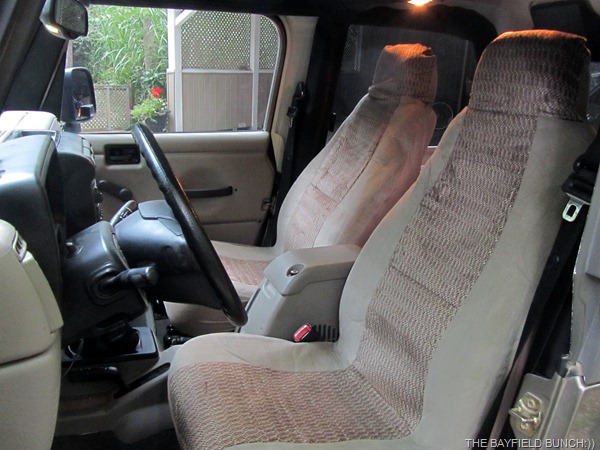 NEW JEEP SEAT COVERS…..DON’T KNOW WHATEVER POSSESSED ME TO PUT BLACK SEAT COVERS IN HERE A COUPLE YEARS AGO:((

I think Gypsy's ON THE ROAD AGAIN blog is one of the first blogs I put on my side bar years ago & I have been following her life ever since. Her ups, her downs, her adventures while on the road, & her home life. I like Gypsy's honesty with her feelings. She doesn't sugar coat anything & if she is having a bad day she will tell you about it. I admire her courage as a single lady to strike out on her own taking on new challenges. A few years ago she hauled a big fifth wheel around the country with a big truck living a full time life on the road. She now has her boots on the ground & calls Sacramento California, home. But, that hasn't stopped her from venturing out in her car all the way over to the east coast of America & back several times. At the moment she is camp hosting at LASSEN VOLCANIC NATIONAL PARK, a place I remember her being just a few short years ago as well.  This Gal’s got a lotta spunk:)) 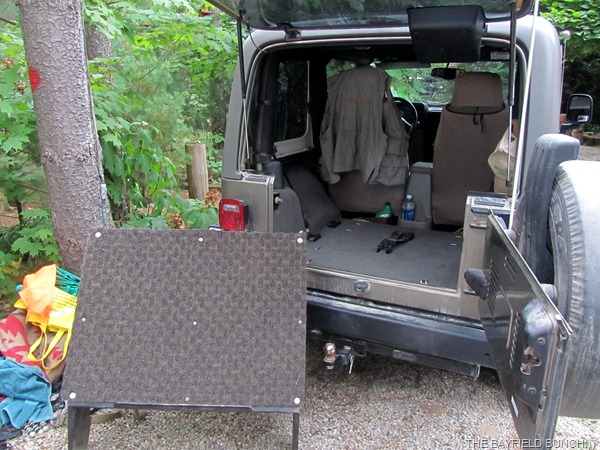 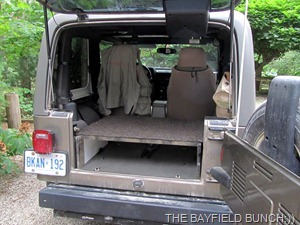 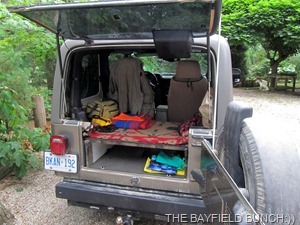 OUR FRIEND BRUCE BUILT US THIS NEAT LITTLE PLATFORM FOR THE BACK OF OUR JEEP A COUPLE YEARS AGO…PHEEBS LIKES TO TRAVEL BACK THERE & LOOK OUT THE WINDOW, ALSO GOOD FOR MY CAMERA EQUIPMENT TO BE OUT OF SIGHT UNDERNEATH…LIFTS OUT EASILY

Read another blog this morning that I can totally identify with. Fellow Snow Bird, Peter, over at AMERICAN TRAVELER is feeling the stirrings of travel for the upcoming season. We are like minded about our destinations & love of the great American south-west. The very morning we received a phone call from our Real Estate agent in Prescott Arizona saying 'the deal was done, the Congress house was ours' we were sitting outside in the shadow of Wickenburg's Vulture Peak this past March having breakfast with Peter. Minutes later we were in his Motorhome beginning what would turn out be an almost endless trail of paper work over the following weeks. 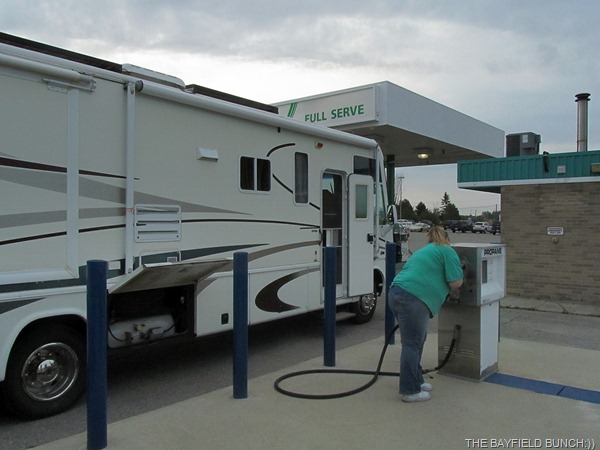 In April of 2008 shortly after returning to Canada from the American south-west I wrote a humorous little post about our travels to the States.  Well, I thought it was kind of humorous but apparently not everyone shared my thoughts.  I received this comment on our blog the following day…. "Why can't you Canadians stay on your side of the border and quit complaining about the USA in your blogs?"  Well, I couldn’t let that one go could I.  Following, are my original comments, but with a difference.  I re-posted the article, answering each & every one of my comments with an explanation of sorts.  Here then is the post………………… 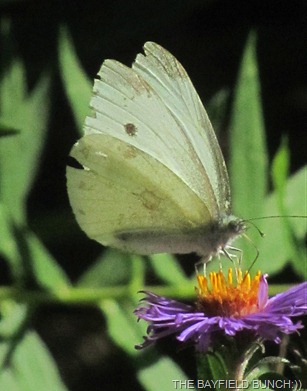 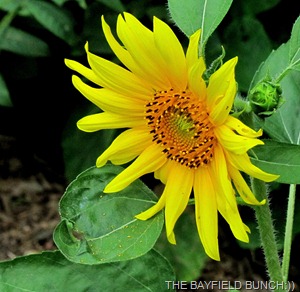 A COUPLE PHOTOS ALONG THE TRAIL THIS AFTERNOON WITH MY LITTLE POINT & SHOOT CANON POWERSHOT SX 210IS
(written in April of 2008) Below are a few thoughts, opinions, ideas, observations & basic musings I have concluded about our trip. Some are greatly exaggerated, some are slightly humorous, some are angry, some have no basis in fact whatsoever, some are biased, some are off the wall, some are pure speculation & some I have no idea where the thought process came from in the first place. However, they all have one thing in common. There is an element of truth in each one. Even the ones with no basis in fact whatsoever:)) 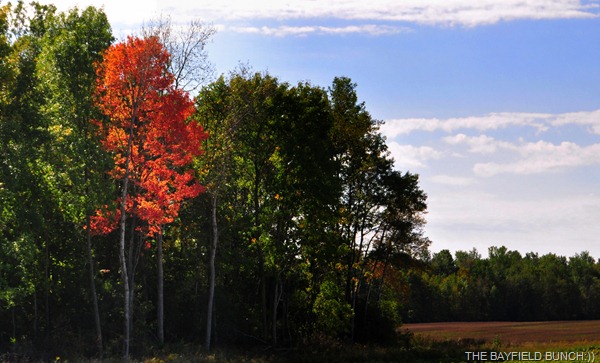 AN EARLY SPLASH OF AUTUMN COLOR

So, let’s just look at this as my own personal…..GROANER’S CORNER tonight:((

1. Why does the American southwest have to have sooooo much wind!!
>>Just a curious question on my part. Probably has something to do with the mountains to the west & the flat plains to the east & the fact that most prevailing winds come from the west. Complaining?? I think not!!
-

2. There are more McDonald's restaurants than there are grains of sand!!
>>Complaining?? No sireeee!! I happen to like McDonalds & we've got lots of em here too:))
-

3. There are more shards of broken glass along some of the roadsides in the southwest than there are stars in the sky.  We find this problem in many places & the Reservation lands between Tucson & Why Arizona comes to mind. >>Unfortunately, this one is fact. And it's a sad fact too. I just don't understand why some areas have let their roadsides become such a mess. We have similar problems here in Canada as well. Is it a complaint?? Yes, but it applies here as well.
-

4. Why can't convicted drunk drivers & alcohol related driving offences people be made to crawl on their hands & knees along the countless thousands of roadway miles picking up all the broken glass from a ka-zillion booze bottles they have thrown out of their cars year after year after year!!!!
>>This applies to any country, anywhere, & not just in the USA.

-
5. What are all those American military planes doing in the sky every night over southern Arizona. >>Pilot training is the obvious answer here. This was not a complaint, just an observation.
-

6. What ever happened to simple gas pumps. Nowadays you need a degree in engineering just to figure out all the different types of pumps & how they operate. I hate those things!!
>>This one's about gas pumps. All gas pumps everywhere!! Complaint, yes. Specifically about America...no!! Gas pumps are gas pumps wherever they are.
-

7. Why can't we just do away with the border between Canada & the U.S. & cut down on those long border waits & silly customs questions. And stop those stupid agriculture checks. The customs officials make enough money to buy their own food!!
>>Well, this one is self explanatory & works both ways. Canadian or American customs practices coming or going no matter which side of the border your on. Anti-American?? No, not at all.

-
8. And if I fly my Canadian flag it doesn't mean I'm there to claim I have just defeated the United States of America in some big huge war or something. It's just a Canadian flag to say, hey, we're from Canada guys. Your friendly & helpful neighbors to the north, remember. Geeeeezzzzzzzz!!  However, I have done a little search on protocol here & in the future we will fly the American flag above our Canadian flat & hopefully that will smooth the troubled waters.
-
9. How come the United States hasn't smartened up to Tim Horton's coffee yet. That Charbucks stuff you got is awful.
>>Well, I could get me in big trouble over this one but I'll have to defend myself by saying it's a personal choice I guess. However, they don't call Starbuck's, Charbucks for nothing you know. Anti-American, Anti-caffeine, or anti-anything?? Nope, just happen to think Tim's brews a better cup of coffee:))
-

10. Why can't some places put butter on the toast.... I'm talking to you Cracker Barrel!! And while I'm at it, why can't you people include the price of coffee in the breakfast price. Coffee is separate??...why is that!!
>>And, I'm squawking about toast not being buttered here. Not exactly earth shattering & probably something I shouldn't have squawked about in the first place but some days you just got to complain about something & for me right now it’s unbuttered toast. I don't know if we have Cracker Barrel here in Canada, but if we do.........I hope they butter the toast or I'm gonna be really ticked!!!!!!!!!!!!

-
11. How come so many towns have so many wrecked & tumble down buildings in them.
>>I think this is a legitimate question & I'm assuming the southwest has a different set of by-laws & building codes about derelict old buildings. I think most places in the east tear the buildings down for safety reasons. However, on the flip side of that question........Every time you tear down some of those old buildings, your destroying a part of history forever. And after all, isn't that what the American West is all about..........history of the old west. So, I'm on the fence here. But complaining........... no, just wondering.
-

12. And, why can't you Americans put some color in your money so us Canadians up here can tell a one dollar bill from a hundred dollar bill.
>>Alright, you got me on this one............maybe we should stay on our side of the border before we all go broke!!
---

By the way, I didn't include all the favorable comments about America I've made because for sure I'll have some Canadian with his nose out of joint emailing me to say, "well, if ya like it down there so much, why the hell don't ya just stay there!!

---
Lastly, a word to the commenter……. I'd like to thank you for your comment because it gave me something to think & write about on an otherwise boring Sunday night & if you have the time to read the blog about our recent trip to the southwest you will see that we love the USA:)) My positive comments about your country probably outweigh the negative comments by about 500 to 1. Have yourself a good day & welcome to our Canadian blog......on both sides of the border!!
P.S. My lovely American wife is from Spencerport, New York.  So there!!    Toodles:))