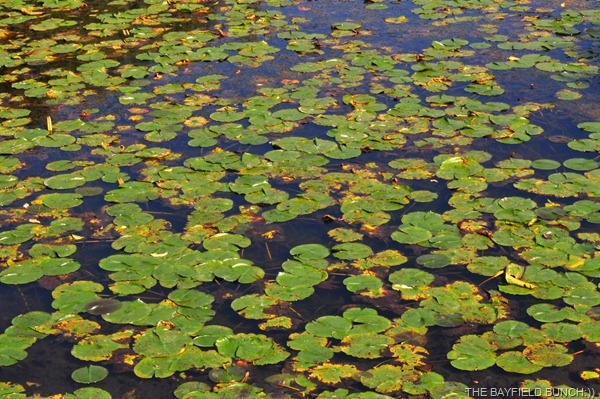 With rain forecast over the next few days I figured it would be good to tidy up a few outside loose ends in the back yard & put some gardening tools away. Didn't seem to have the new campfire pit just right so ended up moving it a couple of feet all the while telling myself, "Al, if you just took a minute to do things right in the first place, you wouldn't have to do them a second time!! 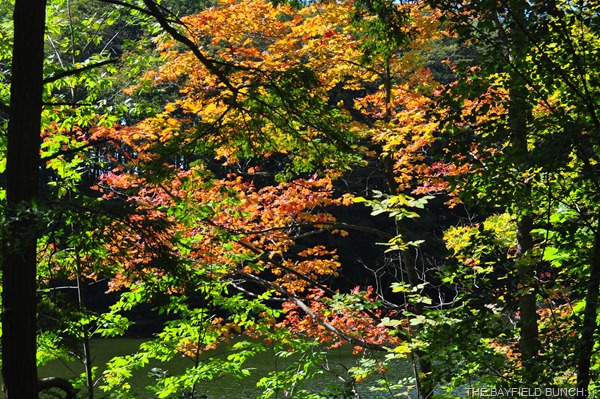 BEGINNING TO GET A BIT OF COLOR IN OUR TREES
JoAnn Dubrouillet, who many will remember from her & Doug’s RV Blog called 'Living Our Dream,' contacted us this morning saying she was in London Ontario & coming to Bayfield today with some friends & would we like to meet for coffee. Yep, sure would. JoAnn is visiting from Florida.  Last time we saw JoAnn was a couple winters ago in Sunsites Arizona. We met JoAnn & husband Doug (Doug passed away in August 2011) along with Jo & Fred Wishnie at Margies Cafe for breakfast one fine morning. Originally met JoAnn, Doug, & Filmore their big Standard Poodle (Filmore passed away in April 2012) in Yuma about 5 years ago & they are the one's who put Kelly & I onto the Ranch sitting job at Jeanie & Ray’s near McNeal Arizona. Had seen them one other time in Borrego Springs, California. 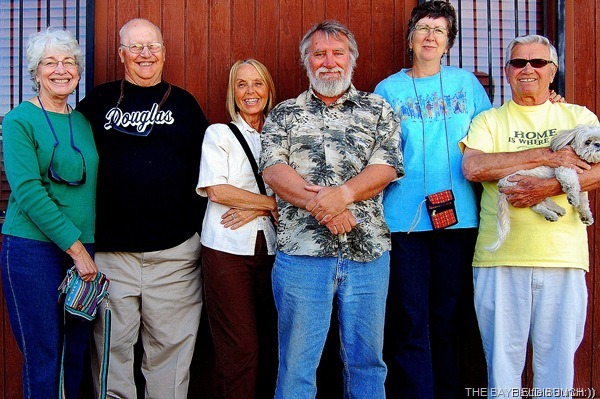 JOANNE, DOUG, KELLY, AL, JO & FRED WISHNIE OUTSIDE OF MARGIES CAFE IN SUNSITES, ARIZONA…DECEMBER 12TH, 2010
Met JoAnn & friends Kathy & Larry today at an easy to find prearranged spot in Bayfield about 12:15.  From there we convoyed a short distance to the Bayfield Berry Farm for lunch.  Tourist season is over in Bayfield now so we basically had the whole place to ourselves.  So nice to see JoAnn again & we have been keeping up with her traveling times on Facebook. 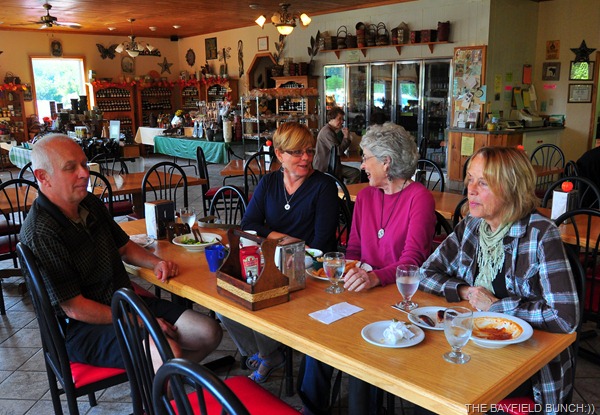 LARRY, KATHY, JOANN & KELLY AT THE BAYFIELD BERRY FARM TODAY FOR LUNCH
From the Berry Farm it was just a short drive to our place where JoAnn got to meet the fabulous Pheebs.  And, she especially wanted to see our sunroom where I put the blog together every night & have taken so many nature photos of our front yard from over the years. 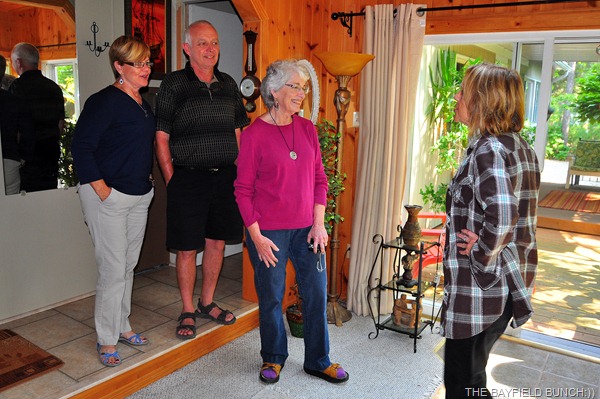 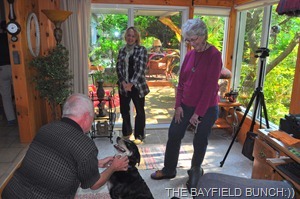 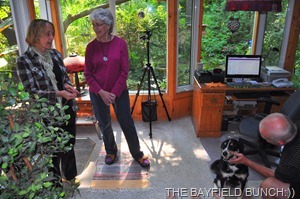 THAT LITTLE PHEEBS SURE LIKES ALL THE ATTENTION We also got to meet Kathy & Larry’s little 11 year old Yorkie, Maggie.  A sweety for sure & of course Pheebs liked her as well.  We did a little walk around our yard & snapped a few photos along the way. 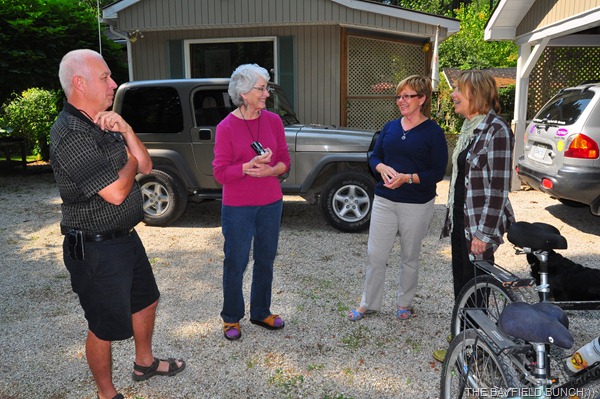 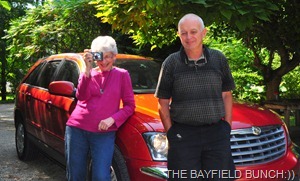 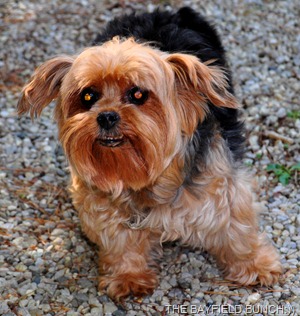 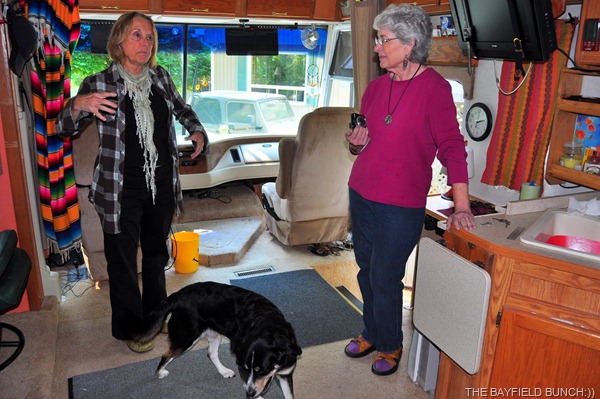 AND, A LITTLE TOUR OF THE MOTORHOME AS WELL
On the way back to Bayfield we did a little sight seeing with JoAnn riding with me in the Jeep & Kelly in Kathy & Larry’s car.  Kind of a double tour guide if you will.   Stopped at DEER PARK LODGE where Kelly works & showed the folks a few of the cottages. 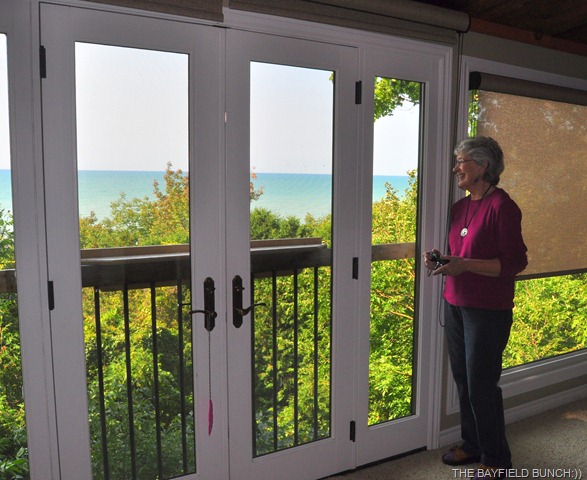 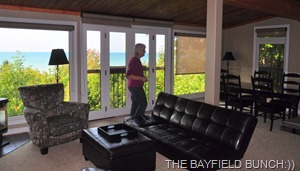 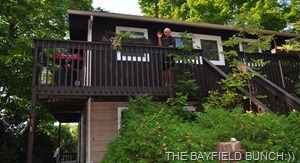 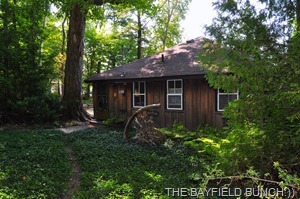 From Deer Park we swung down around the harbor where all the sailboats are at anchor.  But, not at anchor for much longer because it is the time of year now when all boats have to come out of the water & spend the winter months on wooden stilts in various areas around the harbor.  Watched a truck haul a big sailboat up from the harbour on a trailer & skilfully back it down a short curvy road to deposit it on the hard surface of a tennis court. Toured around Bayfield's Sunset Park overlooking the lake & up Bayfield’s main street to Clan Gregor square where it was time to say good-bye.  They were headed for Goderich next & still had some more sight seeing to do.  Nice to have met Maggie, Kathy & Larry to day & it sure was nice to see JoAnn again.  A week from today JoAnn heads back to her home in Panama City Florida.  Don’t know if we will ever meet again so it was nice spending a few hours with these folks today.  All the best JoAnn & thanks for stopping by to say Hello:)) SAYING GOODBYE TODAY………………………
It’s always kind of sad saying goodbye to folks in the RV world because of the lifestyle’s nature.  People are on the move & quite often get togethers are pure happenstance.  And, there is another reason.  I don’t know what the average age of RV’ers is but I’m guessing it has to be 60+.  That alone adds a touch of sadness to good-byes in RV land.  The reality is simply that you may never see someone again.  Yes, we all say, ‘see ya down the road’ or ‘catch ya next time’ etc.  But, one never knows for sure anymore at this age & stage of life………………….. 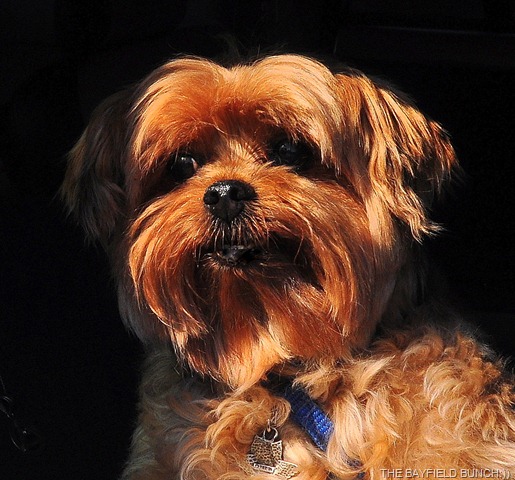 NOW, HOW’S THIS FOR THE CUTEST LITTLE MAGGIE MUGGINS YOU EVER SAW:))
GROANER’S CORNER:((   Upon entering the little country store, the stranger noticed a sign saying DANGER! BEWARE OF DOG! posted on the glass door.
Inside he noticed a harmless old hound dog asleep on the floor beside the cash register.
He asked the store manager,
"Is THAT the dog folks are supposed to beware of?"
"Yep, that's him," he replied.
The stranger couldn't help but be amused.
"That certainly doesn't look like a dangerous dog to me. Why in the world would you post that sign?"
"Because", the owner replied,
"before I posted that sign, people kept tripping over him."
---------------------------------------------------------------------------
- Tourists see the world, travelers  experience it.
- Home is where your pet is:))
- "If having a soul means being able to feel
love and loyalty and gratitude, then animals
are better off than a lot of humans."
(James Herriot)
- The pessimist complains about the wind; the optimist expects it to change; the realist adjusts the sails -William Arthur Ward
- The only thing better than right now will someday be the memories of right  now...AL.
- It is not so much having nothing to do as it is not having the interest to do something....AL.
- OUR PHOTO ALBUMS - .https://picasaweb.google.com/117858411710794543295/