TURNED OUT TO BE A 3 DOG AFTERNOON:)) 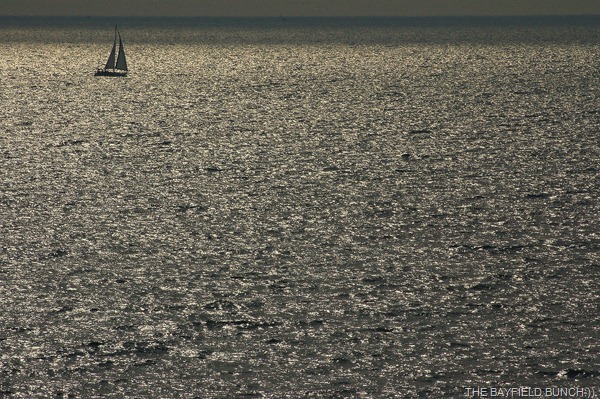 It was the soft pitter patter of rain on our steel roof that had me on my feet about 5 a.m. this morning. Shed doors were open as well as the rig's door & the Jeep's windows were down. The rain was light & I had everything closed up in a couple minutes with no problem. That early morning hour is always a nice time to be outside anyway.
---

Couple surprise visitors for Pheebs today.   Stella & Guinness dropped in for a bunch of hours when Kelly brought them home from the DEER PARK LODGE office while she ran some errands.  With today’s rains she didn’t want to leave them outside or in the office while away because puppy Guinness has a habit of leaving the office looking like a bomb went off inside. 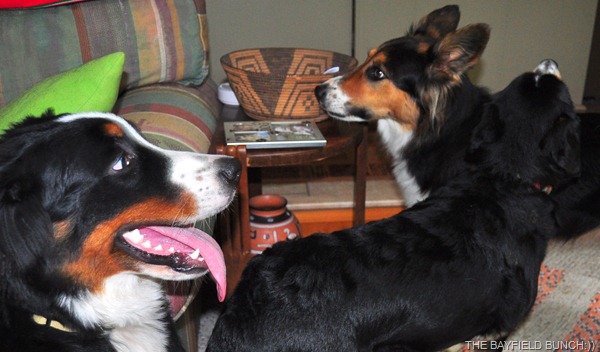 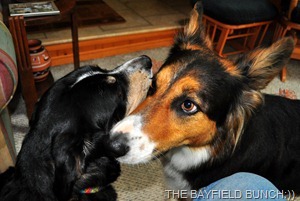 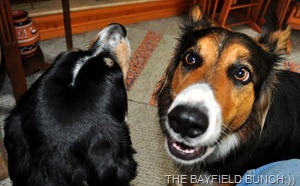 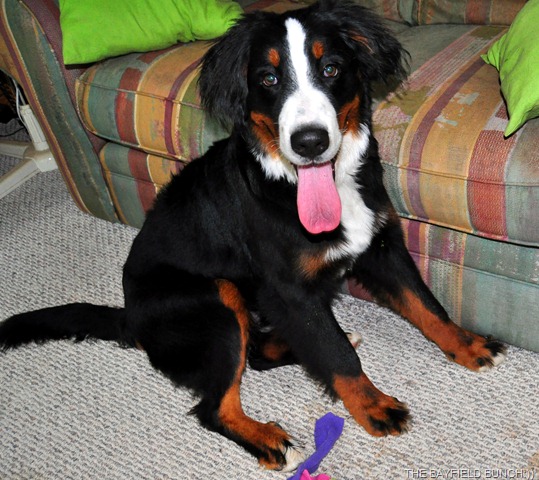 AND PUPPY BOY GUINNESS IS REALLY A SMALL HORSE WITH A DOGGY SUIT ON…GUINNESS IS TOTALLY IN LOVE WITH THE PHEEBS:))

Park Ranger Gaelyn at GEOGYPSY caught herself some nice sunset photos at the North Rim of the Grand Canyon recently.  Clouds make for spectacular sunrises & sunsets & with Monsoon season in full swing, Arizona is showing off some of her finest scenery.

Might want to check out Debra’s post about THE BANE OF A TRAVELING COMPANION.  We RVing Snow Birds sometimes take it for granted traveling with almost all the luxuries of home with us.  Our own washrooms, beds, showers, kitchens…..& space, etc.  Whole different story when traveling in a much smaller vehicle like a car, truck or SUV.  Debra tells it like it is…………….

When's the last time you had your rig stuck in a ditch? Never, you say. Geeezzzzzz, wished I could say that.  We were RVing Newbies & had only had our Motorhome a few months when this incident occurred while in Lindsay Ontario to get a satellite system installed back in 07. 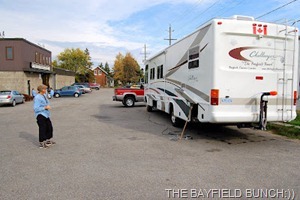 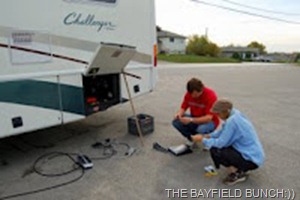 I knew the mistake I made as soon as it happened & I knew right away without getting out of my seat we were gonna need a tow truck!! I had read about this happening to other RV'ers, especially upon entering or leaving a campsite road & especially at night. It wasn't a campsite I was turning off the road into, but a large parking lot on a dark street in an industrial section of Lindsay, Ontario Canada.

---
We had arrived in Lindsay Tuesday night Oct. 3/07 about 8 p.m. & thought we would take a drive past the TECH MOBILE COMMUNICATIONS place where we were going to have our satellite TV & internet installation & lesson the following morning. We missed the corner near their location but there was a parking lot just up around the corner & up the road on the right with a wide entrance. I could see there was a second entrance & decided to turn into that one assuming it was equally as wide. WRONG!!! It was dark & hard to see so I eased to the left of the road to make a wide sweeping right turn. What I failed to see was the supposed entrance I was turning into was a narrow ramp type road for exiting the parking lot to the west. Everything was fine as we swung round & entered two thirds of the way up into the driveway. And then....... a bump, a scraping crunch sound & we stopped. A little pressure on the gas pedal & nothing. Into reverse, step on the gas a bit, nothing. We were hung up high & dry. 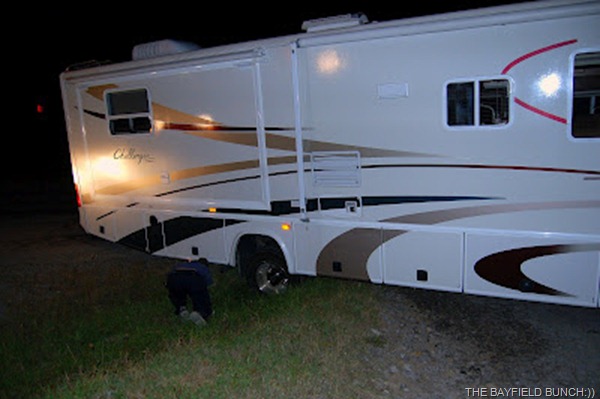 YOU CAN SEE THE TOW TRUCK OPERATOR’S FEET STICKING OUT BEHIND THE BACK WHEELS AS HE TRY’S TO FIGURE OUT A SOLUTION FOR OUR ‘STUCK’ PROBLEM:((

I immediately remembered some of the RV forums where I've read about people getting into this situation so I knew what was wrong, we were in trouble, & needed a tow truck. What a sickening feeling it was as I stepped out the side door because the bottom step was only inches above the ground. The rear passenger side wheels had dropped into a ditch beside the driveway & the rear end of the coach was now sitting right smack down on the road. As I walked around the unit my heart sank even lower because I could not see any way of getting the motorhome out of it's predicament without causing a lot of further damage. Towing it out from the front or back was going to do some real serious bad stuff for sure. It was a really dumb mistake I had made & I knew it. I was ready to give up RVing right there & then & just simply take up basket weaving & stay home forever. No doubt about it I figured...... we were in a rut!!
---

Meanwhile, as I am surveying & fretting over this doomsday scenario Kelly was on the cell phone talking to our E.R.S. (Emergency Road Service) people, explaining our situation & location. The dispatcher had a tow truck scrambled within minutes. (Gaynors Towing Service-Lindsay) They even called back to see how we were doing. Now, that's friendly & efficient service I'd say & we had a tow truck there in less time it takes to drink a quick coffee.

As all the negative thoughts were rolling around in my head I had already made a second miscalculation by assuming the worst. (I usually do that) What I hadn't figured on though, was.....the positive thinking tow truck driver. He was a young fellow, baseball cap, friendly & looking every bit like a capable mechanic type guy as he strode over from his truck. I didn't have to explain the situation, the problem was very obvious to say the least. He didn't say too much at first so I took that to mean we were really up the creek for sure. He got down in the ditch & crawled in behind the back tires for a look see. That's when I took the picture & you can see his legs & feet sticking out. In a muffled voice I heard him say something like, "hey, you got load levellers on the coach." Did I detect some optimism in his voice & maybe, just maybe, a ray of hope here?? 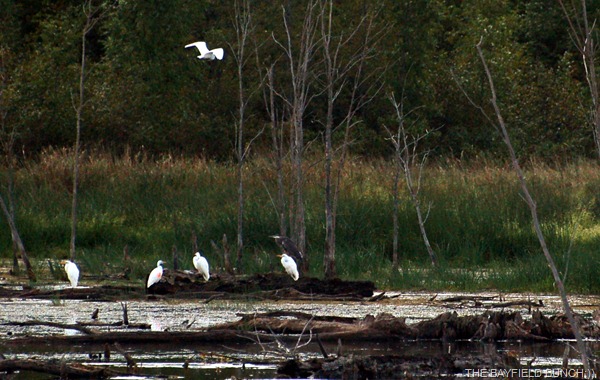 He climbed back out & instructed me to go into the coach & put the rear passenger side hydraulic load leveller down. Well, that instantly got me real nervous for sure because I had only ever put them down once before at home in the driveway when I was trying to figure out how they worked. (which I never really figured out too good anyway) I remembered to put the emergency brake on, plus the hydraulic on/off switch but of course I dumped both valve levers & put all 4 levellers down. WRONG!! I could here him holler something at me from out the side door so I quickly managed to retract the front levellers & get us back down into earth's orbit again. I also quickly retracted the rear drivers side leveller too. Well, at least I think I did. Now, we were back in business & the tow truck driver fellow was probably wiping his brow & breathing a sigh of relief as he was thinking something like, TOURISTS!! He had me carefully move that last leveller lever into a down position & I could feel the back end of the coach lifting, & lifting, & lifting. Any higher & I figured we would be in orbit. When it seemed almost certain we would, he hollered, "STOP!!

Then.... nothing but silence for about 10 seconds. Had he left & gone home, was it coffee break time, did Lindsay have a 9 o'clock curfew?? Finally I heard, "ok retract the leveller all the way up." I nervously put the dump lever in the up position & the coach descended, but not as far as before. Hmmmmmm. "Ok, back up real slow & try not to spin the wheels" he said. What's this, could it be, could it be. YES, as I ever so slowly stepped on the gas the coach very smoothly backed right out onto the road. 'YAAAAAAAAAAAAAAY:))" I quickly parked the rig & got out to see what wondrous miracle this young fellow had performed. "Short planks" he said. "Always a good idea to carry a couple of short sturdy planks with ya." He had them in the tow truck & when the leveller raised the passenger rear side of the coach he simply put 2 sturdy planks under the rear dual wheels. When I retracted the leveller the tires came down firmly on the planks & I was able to back straight out onto the road. Wow, talk about a feeling of relief.....but, then it got even better.

As we inspected the coach underneath with flashlights it was apparent that there was no damage & a following closer inspection the next morning confirmed this. Thank heavens for peanut butter & smart tow truck operators:))))))) Too bad about some motorhome driver's though:(( 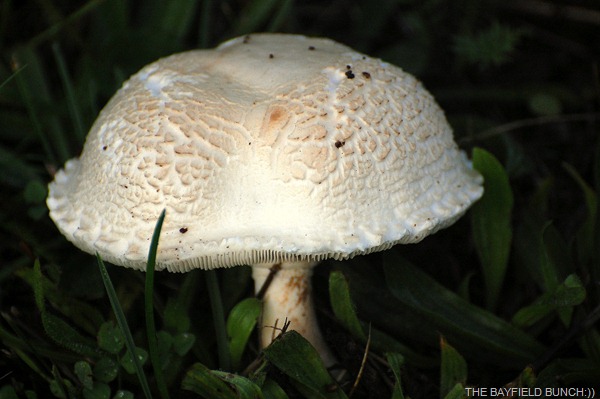 WE ALWAYS HAVE CURIOUS LITTLE CRITTERS POPPING UP IN OUR GARDENS

GROANER'S CORNER:(( One day, a little boy wrote to Santa Clause, "Please send me a sister." Santa Clause wrote him back, "Ok, send me your mother."