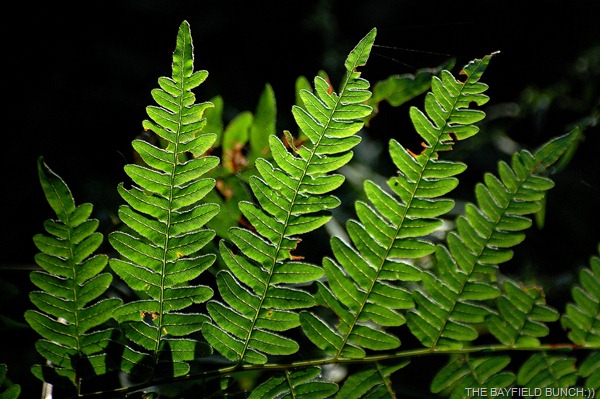 Cooler nights over the past several days have brought a quiet calm to the forest. We have not been plagued by the sounds & bites of flying insects for a couple days. I can hear Crickets around the pond & the air is still. Early stirrings of Autumn are upon us as morning sunlight shifts shadow patterns ever so slightly. Daylight dwindles earlier as evening air takes on a slight chill. In another month, Autumn will begin stirring her paints & colors readying herself to set our forests ablaze in reds & gold's. In coming weeks we will begin to see a few small splashes of color appearing.   But, only a few for now:)) 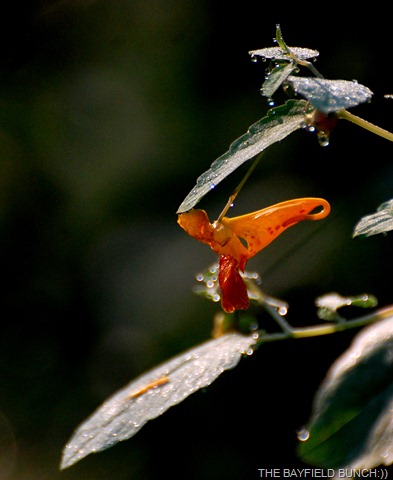 I lost a an old traveling companion & confidant on September 14th of 2008. For a couple of years we had spent many pleasurable moments & travel times together. Then one day, it only took one careless moment on my part, & my old friend was gone.

In a hurry, coffee in hand one sunny morning, I headed out the door to see what the doggy guys were barking at. Not wanting to put my favorite coffee cup Buddy in harm's way I reached out to set him on the deck railing whilst I headed down the steps to do battle with what was probably a chipmunk making faces at little Cora. It was the "thunk" behind me & the tell tale sounds of breaking pottery that reached my ears before my brain did. I knew instantly, my favorite coffee cup Pal had just bit the dust. No point in even looking back as I continued out into the yard to have words with the furry cast of noisy characters. It was good I had something to focus on before returning to....pick up the pieces:(( 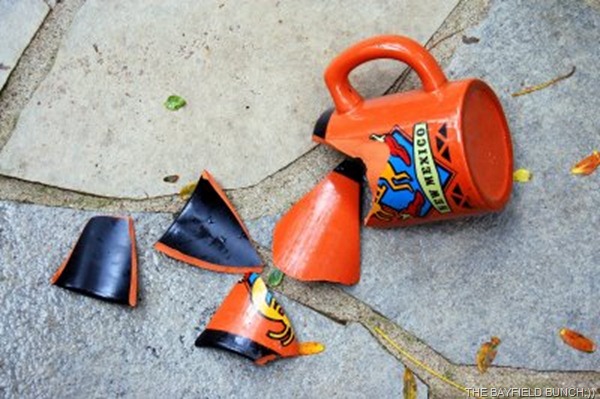 IT WAS A SAD ENDING FOR MY FRIEND AFTER HAVING TRAVELED SO MANY MILES TOGETHER
My old friend & I first met in the Apache Canyon Trading Post near the Carlsbad Caverns in New Mexico back on December 22, 2006. The Bayfield Bunch had stopped in to have a look around after exploring the Caverns earlier in the day. I'm not much for hanging around in gift shops too long so after a quick amble through the place I was headed back out the door when I spotted it.  He was sitting quietly with a bunch of his brightly painted pottery friends on a shelf by a window. 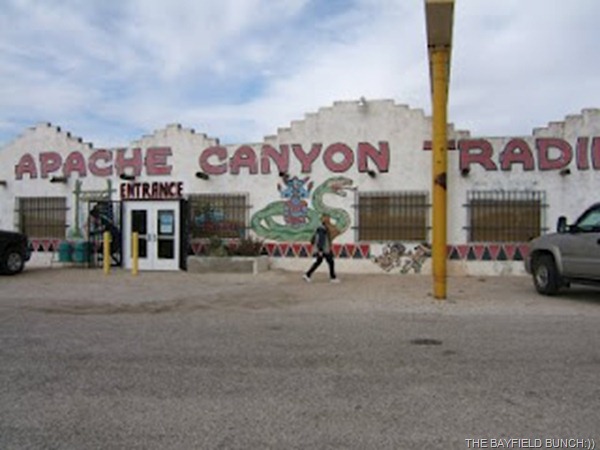 There was a tanned adobe look about this coffee cup fellow & he had colorful markings with a name that read, New Mexico. And I liked his black glazed interior. A handsome little devil indeed. I knew right away we were made for each other as I gently lifted him up off the shelf & headed for the counter. 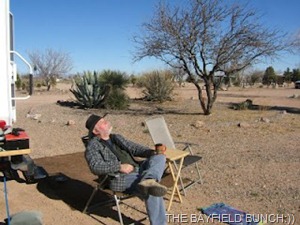 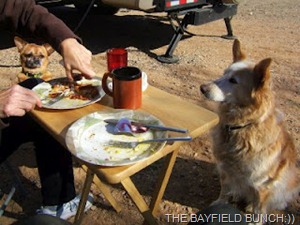 It was the beginning of a friendship that would last nearly 2 years with many memorable moments spent together, relaxing hand in hand. Sometimes beside me as we enjoyed many desert campfires, sometimes riding for endless miles up on the dash of the motorhome scouting the way ahead. There were times he helped me outside in my various projects around home, & other times rode with me to work. Occasionally he went missing for a day or two until I was able to locate him again sitting on a stump in the garden or a rock out in the yard someplace, just where I had carelessly left him. But most often as not, he was right here on my desk beside the computer as I plunked away at the dusty keys day after day. Back in those days I drank 4 cups of coffee a day so don’t know what he would have thought nowadays when I only drink one.  A little dejected maybe. 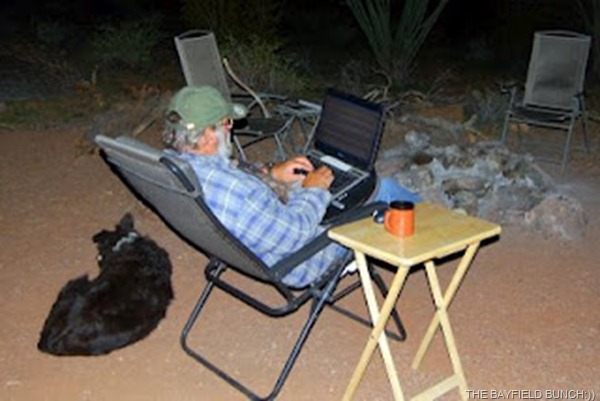 
Yes, it was a sad day indeed & I never had the heart to throw my broken little Buddy away. After 4 years he still sits, in his broken state, in our work shop shed out back waiting for me to put him back together again one day.

Tonight, after writing this post, I went out to the workshop to take a couple photos of the cup & I think tomorrow I will glue my little Buddy back together & take him with us this year to his old home, the Southwest.  There, I will set my old Pardner on the fireplace where he can once again be a memorable part of…..The Bayfield Bunch:)) 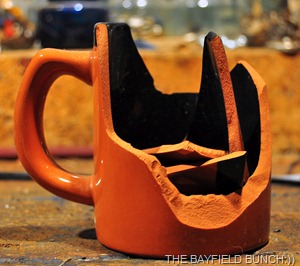 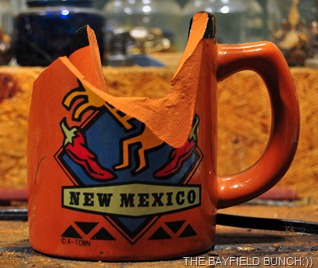 Surprise visit today from fellow RV'er Gerrit Van Keulen. Located in Wingham Ontario for the summer, Gerrit was in our area so popped in to say hello. They had spent the winter in Yuma. I remember Gerrit first emailing me back in 2010 with some RVing questions. Gerrit & his wife have since sold their home in Wingham & now travel full time in their 42' Motorhome. Nice meeting you today Gerrit:))

And Wednesday August 8th marks the first anniversary of our little wonder dog Pheebe coming to live with us.  She has sure brought a lot of happiness into our lives:)) 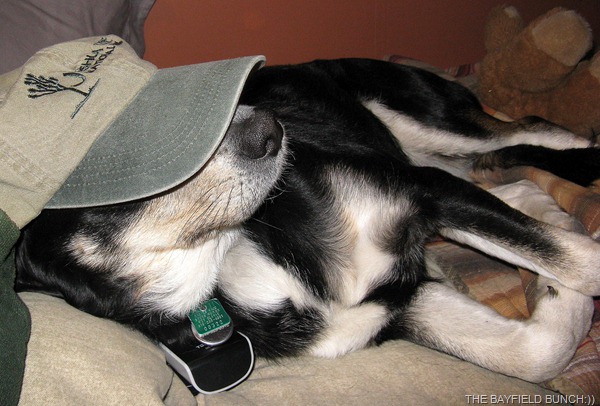 GROANER'S CORNER:(( And, a little coffee humor.......AN OVERWEIGHT MAN WAS COMPLAINING ABOUT HOW COFFEE MADE HIM NERVOUS. I SAID WHY DON'T YOU QUIT DRINKING COFFEE. HE SAID, "BECAUSE IF I DIDN'T HAVE THE SHAKES, I WOULDN'T GET ANY EXERCISE AT ALL."

-SHE'S LIKE YESTERDAY'S COFFEE... --A LITTLE WEAK IN THE BEAN.
-A MAN WENT TO HIS DOCTOR AND SAID, "EVERY TIME I DRINK COFFEE, I GET A STABBING PAIN IN MY RIGHT EYE." HIS DOCTOR SAID, "WELL, HAVE YOU EVER TRIED TAKING THE SPOON OUT OF THE CUP FIRST?"

1 . YOU SLEEP WITH YOUR EYES OPEN.