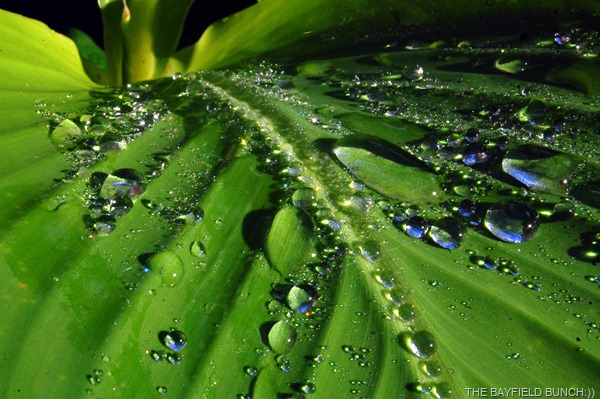 HEAVY DEW ON A HOSTA LEAF

Kelly has a couple days off so we loaded up the fabulous Pheebs & headed off to visit Uncle Harry this morning. Needed to pick up a few things in Goderich first so headed up around that way. I really didn't need to pick up a sausage McMuffin at McDonald's though but Kelly was on the hungry side & I didn't want to see her eat alone:(((( Uncle Harry is still doing reasonably well but it sure isn't much of a life spending one's days alternating between a single bed & a recliner chair.
---
Kelly really enjoys her days off & loves to just sit quietly & read. Like her Mother, Kelly is an avid book reader & I don't know how she gets through so many books so fast. Despite spending some big bucks on new glasses this Spring I still have great difficulty in reading things. As my eyes tire during the day, reading goes from bad to worse. By the time I publish the blog each night I am having trouble reading what I have written on the computer screen. My eyes seem to keep going slightly out of focus. It's the main reason my blog & email text is always on the large size.....so I can see it. Yes, I know about the Ctrl + & - keys but it's a pain switching back & forth.
---

Sprung my new tripod into action this afternoon copying a few old photos. So glad to have that capability now. Reminded me so much of the many hours I used to spend in my darkroom back in the mid 80's copying old black & white photos for folks. Maybe not the most exciting kind of thing for most folks, but then again, excitement can manifest itself in many different ways, depending on the individual. 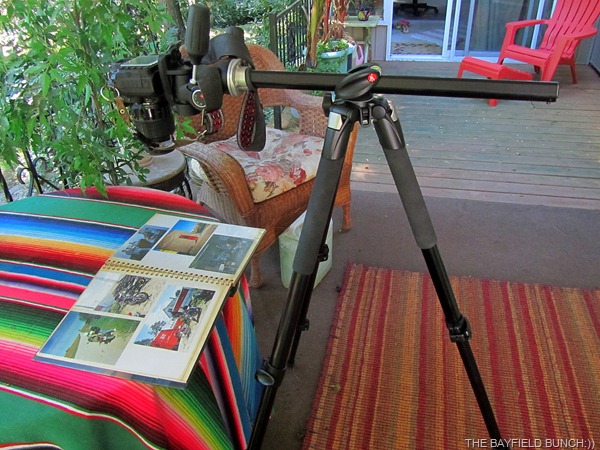 "Excite"....My little Webster's Dictionary here tells me the word excite means, "to call into action, to rouse, to stimulate." What it doesn't tell me is that it is something mostly encountered in large quantities during early youth. The days as a child, when everything was new, exciting, & full of wonderment. Excitement is an elusive quarry now at age 67 but it can still occasionally be had. Excitement can take on many forms for different people & I have always found that fear can sometimes be an important ingredient of excitement. I had never ridden a motorcycle in my entire life until I was 49 years old. A financial opportunity presented itself & I walked into the STRATFORD CYCLE CENTER one day in October of 1993 & bought a used Suzuki 4 cylinder 650cc motorcycle. Can't recall the year but it was a sharp little bike & that was an exciting day for me.  The Stratford Cycle Center is owned & operated by two former Tavistock Brothers who I knew.  John & Jamie Pletsch. 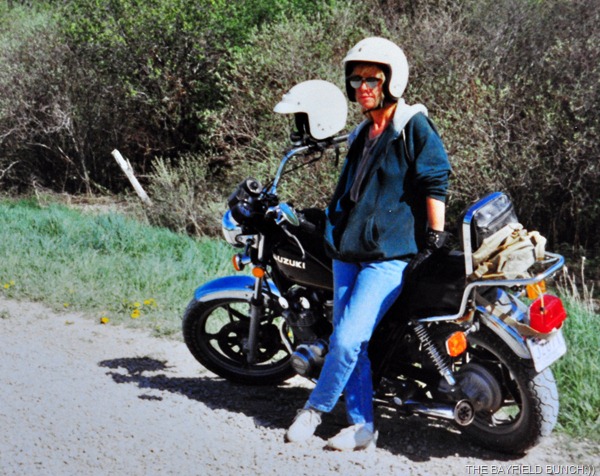 The bike remained in storage at the motorcycle shop for the winter & by Spring I could feel the excitement, anticipation, & fear were all well in place. I signed up at a local College (Conestoga) for an April week-end motorcycle training program. The course supplied the small red noisy smoking Honda bikes & for two days we wobbled & jerked our way around orange traffic cones in the college parking lot That whole week-end was an adventure in excitement all by itself. Back in Stratford a couple days following the course I phoned the motorcycle shop & asked them to bring the bike to my place of employment which happened to be the Stratford Art Gallery at the time. Told them to leave the bike in the parking lot, which they did. I didn't want the young guys at the bike shop laughing at me as I bumbled my way out of their parking lot & that's why I didn't go & pick it up there. 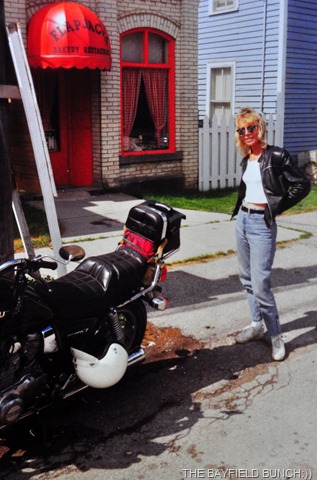 A SUNDAY MORNING STOP FOR BREAKFAST IN WELLESLEY ONTARIO…1994

After work that day when no one was around & everyone had gone home, I donned my spanking new white helmet, gloves, leather jacket, and approached the bike. Excitement began to escalate, but so did the fear. I swung my leg over the seat, put the kick stand up, straightened the front wheel, turned the key & pressed the start button like they showed me. "VaRoooommm"

Now, the fear really took over!!!! This bike was much bigger & waaaaay more powerful than those wobbly little things we had been practicing on at Conestoga College just a few days before. Just ahead of me was the street with lots of big huge noisy cars whizzing by. The fear & excitement was almost overwhelming. Decisions, decisions. Do I really want to do this?? Maybe I should have taken up basket weaving. I clunked the motorcycle into first gear, took a deep breath, eased out the clutch & bounced unceremoniously out the driveway into the traffic, missed second gear, lurched into third, made a mind wobbling left turn & I was off like a herd of turtles in a cloud of heifer dust. The cars all around me seemed close enough to touch, & that’s because they were!!   Made it to the first intersection without getting run over & for the first time felt the teensiest bit of confidence, despite some rapid thumping that was obviously going on in my chest. I had made it half a block & I was still upright, & alive. But, I think my legs were vibrating worse than the motorcycle. Made a shaky left turn through the intersection & headed west. 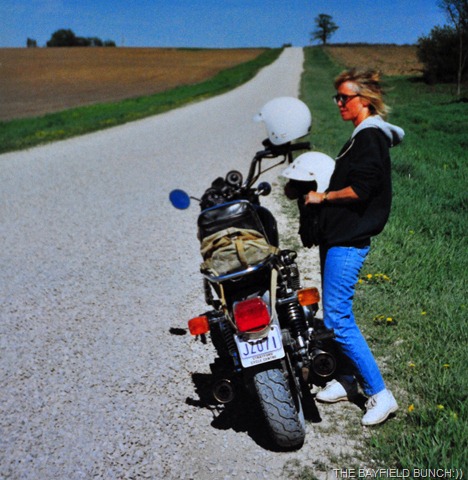 Before starting out that day I had already pre-planned my route so that I knew exactly where I was headed.....the cemetery. Yes, the cemetery!! In Stratford they have a big cemetery with lots of slow winding roads & no traffic. What better place for me to get to know how to handle my 500 pound motorcycle. And, no one to notice my embarrassing beginner's mistakes. The main emotion I was experiencing from the work parking lot to that cemetery was fear, but after reaching the quiet roads of the cemetery the true excitement of what I was really doing began to take over & the fear started to ebb away……a little bit.  It was scary, but I managed to wobble & jerk my way around the roads getting used to shifting the gears, steering, & braking. Corners were unpredictable at first & some over-braking front wheel stops were just about abrupt enough to throw me over the handlebars. But, slowly I began to develop a bit more confidence & actually felt a twinge of enjoyment squeak through that wall of excited fear. Might even have allowed myself a nervous smile or two come to think of it. I was doing OK despite my doubts.  Well, at least until it was time to head the motorcycle home through all that traffic later. 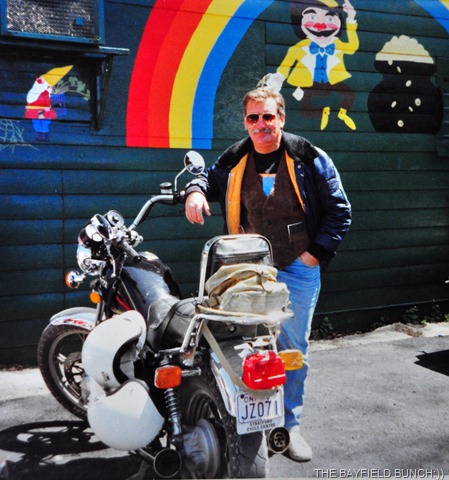 I lived right in downtown Stratford at the time, it was late afternoon, & I knew the traffic would be heavy. I white knuckled my way along & made it alright without embarrassing myself by stalling it at every traffic light or bending up anybody’s bumper. Even managed to get the bike parked okay when I got to my apartment. Pretty proud of myself I can tell you but it was on some pretty rubbery legs that I made the walk from the bike to my apartment. Let me tell you, I was a pretty happily excited fella when I went to bed later that night. And there was no fear left in that excitement....well, not till I got back on that darn motorcycle again the next day.
---
There were more exciting, hair raising, & fearful things awaiting me down the road on that little Suzuki but for the time being I had completed phase one of an exciting adventure that had begun 6 months earlier when I had walked into that motorcycle shop & bought the bike. I had actually done my first ride in real traffic. And for me, that was exciting. Scary, but exciting. Four short months later I had a bone busting motorcycle crash that landed me in a Kitchener Ontario hospital, but that's another ‘exciting’ story for another time.  But, it did involve another cemetery, many miles away……………. 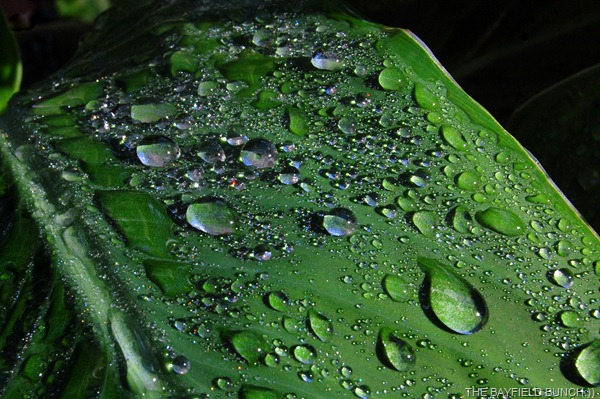 GROANER'S CORNER:(( There's the sad story of the poor guy who was in a terrible motorcycle accident. When he came out from under the anaesthetic, the doctor was leaning over him anxiously.
"Son," he said, "I've got some good news and some bad news.
"The bad news is that your were in a very serious accident, and I'm afraid we had to amputate both your feet just above the ankle."
"Jesus," gasped the patient.
"What's the good news?"
"The fellow in the next bed over there will give you a good price for your boots."
---------------------------------------------------------------------------
- Tourists see the world, travelers experience it.
- Home is where your pet is:))
- "If having a soul means being able to feel
love and loyalty and gratitude, then animals
are better off than a lot of humans."
(James Herriot)
- The pessimist complains about the wind; the optimist expects it to change; the realist adjusts the sails -William Arthur Ward
- The only thing better than right now will someday be the memories of right now...AL.
stargeezerguy@gmail.com