OUR FABULOUS PHEEBS…365 DAYS OF HAPPY:)) 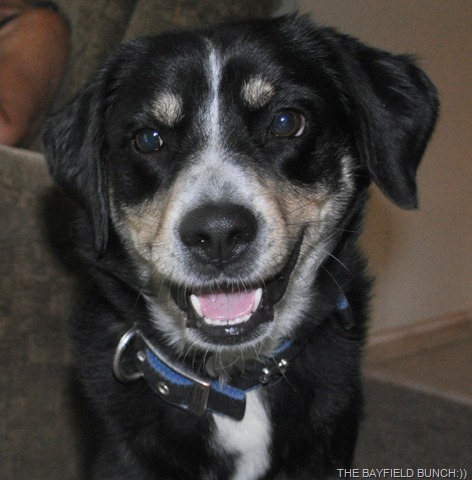 Pheebs & I don't really need a good reason to go Jeeping. We've got lots of viable excuses that work just as well as any old good reason does. This morning's excuse number 412 was a new spool for my battery operated Black & Decker weed whacker. Had set out in hot pursuit of some pesky weeds earlier when I noticed my sweeping ground hugging whacker motion wasn't weally whacking many weeds anymore. Quick inspection revealed all the line had finally been used up on the year old spool. Into the Jeep & off we went. Could have waited, but nope, an excuse is an excuse. And, in my world, a flimsy excuse is always reasonable grounds for a drive in the country. 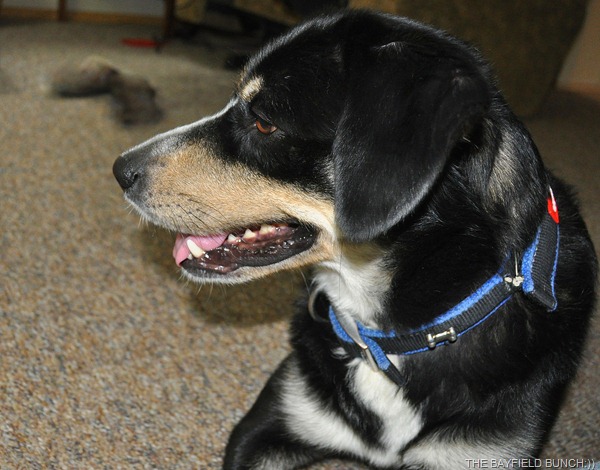 With both windows full down & doggy fur blowing in the wind we landed ourselves at Goderich's Canadian Tire Store 20 minutes later. I was in & out of that store in under 5 minutes. In this cell phone day & age with nearly everyone poised with their fingers on their speed dials to instantly call in a 'dog in the car' alerts or a 'tin can' seen by the side of the road' or 'someone wearing a pair of mismatched socks'.  I am always quick returning to my vehicle. No doubt, calls have been made that have saved dogs, got tin cans removed from roadways, & sent people scurrying off to seek counselling after being sternly admonished for their mismatched socks.  Pheebs & I were soon back home & I was once again doing a little admonishing of my own to our front yard weeds:)) 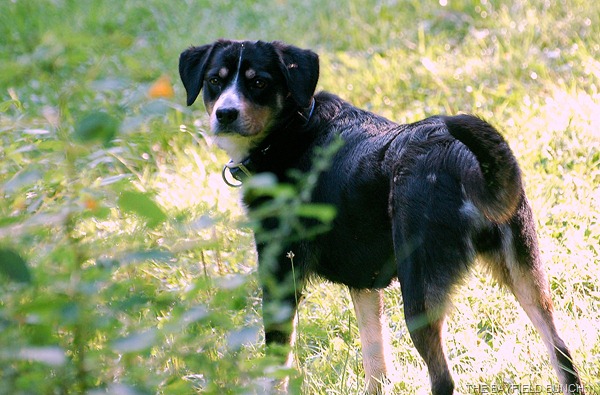 But, not before I had myself a ‘Senior Moment’ while still in Goderich!!  A second quick stop at the Supermarket there had netted me a couple jugs of Cranberry juice & a lady rushing out of the store behind me in hot pursuit shouting, 'Hello, Hello'!! Yep, I had left my direct debit card in the machine. But hey, at least I had remembered my groceries this time.  One out of two ain’t bad on a good day…………… 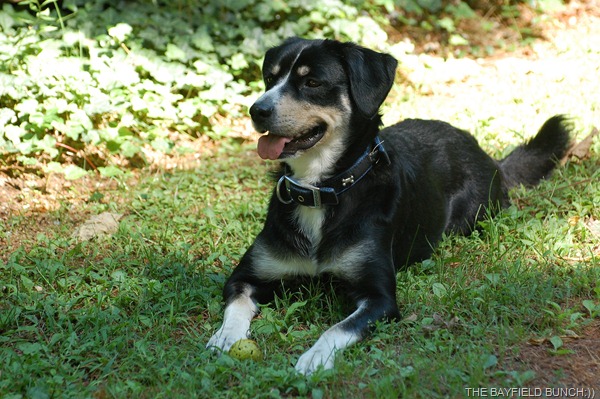 Pheebe wasn't the first dog we looked at on this day a year ago. On our way to see Uncle Harry we had stopped at a farm where a lady advertised a dog needing a good home. As I recall it was a large, young, & very exuberant dog....and not very friendly towards our little Cora whom we had taken along. We had brought Motormouse with us because we had a second dog to meet after seeing Uncle Harry & if the dogs we were meeting were not friendly to the Motor, then we weren't interested. 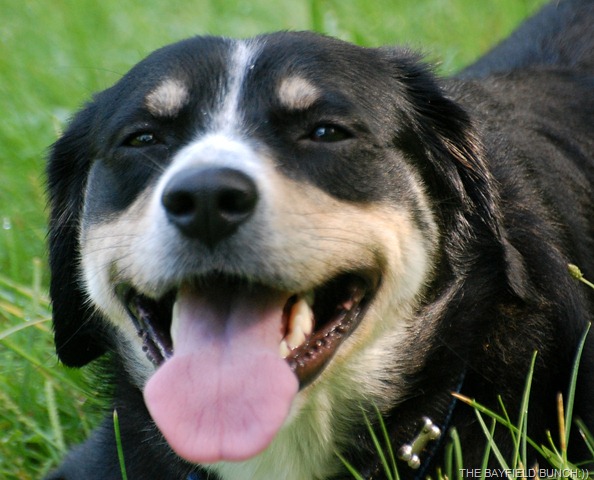 It was early afternoon in Zurich Ontario when we first met a friendly little dog by the name of Evie.  Our Vet had called us saying he knew of a local dog needing a good home & gave us a contact phone number. Kelly phoned that number in the morning & set up an appointment to see Evie in the afternoon. Evie already had a good home but things were just not working out. 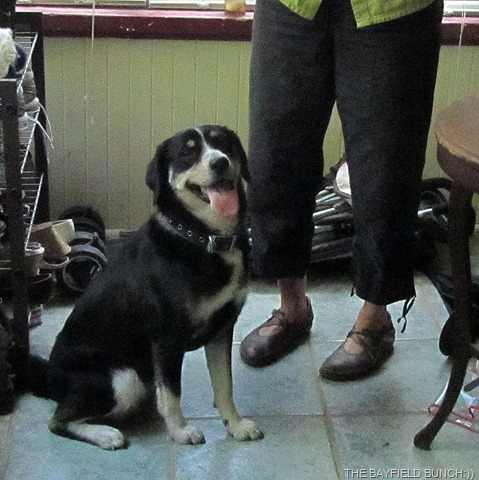 I knew this little happy face pooch was the dog we were looking for as soon as I saw her. She just had that instant friendly non aggressive happy personality.  But, would she get along with our little Motormouse? I went out to the car & brought Motor in. It was Pal's at first site & the clincher came when Cora laid down on the floor & Evie walked over & laid down beside her. It was a done deal & a few hours later Evie’s family drove her over to our place. 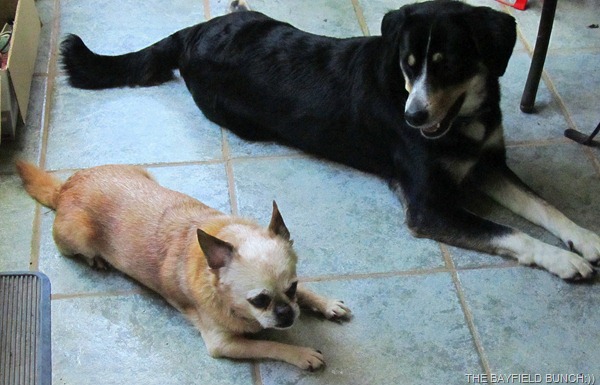 There were some teary good-bye's 20 minutes later as the car backed out of our driveway.  Only a moment's hesitation on Evie’s part before she bounded into the house & right into the hearts, minds, & lives of the Bayfield Bunch. She was 2 years old & it was like she had been with us forever. Made herself right at home & within 10 minutes of being in the house she was sitting on my lap. And, a whole year later, it is still one of her favorite places to be. 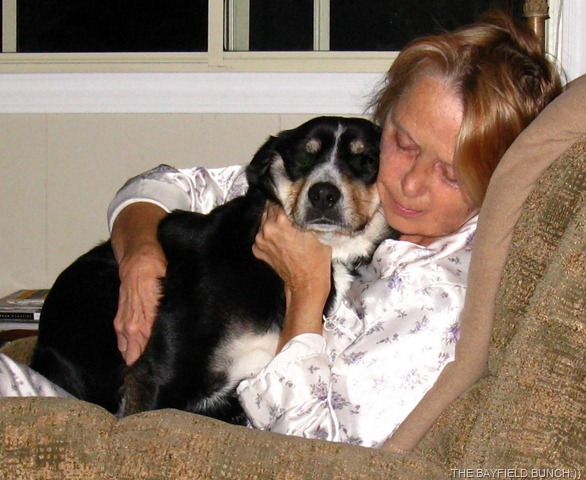 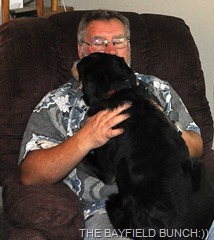 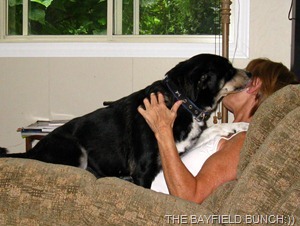 SHE WAS ON OUR LAPS RIGHT FROM HER VERY FIRST DAY HERE….AND WE LOVED IT:))

It was Kelly who came up with Evie’s new name.  We felt Pheebe sounded a lot like Evie & there would be no confusion for her getting used to it.  And it kinda made her ours.  Pheebs doesn't have a mean bone in her body & we have never heard her growl or seen her show her teeth. She has one gear & it is straight ahead happy. She loves all other dogs & everyone she meets. She loves chasing bird, bunnies & squirrels but does not harm them. She caught a Grackle on the ground last year but didn't harm it. The Grackle got up, dusted himself off & flew away. It is the fast running chase Pheebe likes. About a month ago she caught a tiny baby bunny on our morning walk & right away turned & brought it to us.  Pheebe gently let me take the bunny from her & put it back into the tall grass alongside the trail. She had made no attempt to kill the defenceless little creature. She just wanted to play. 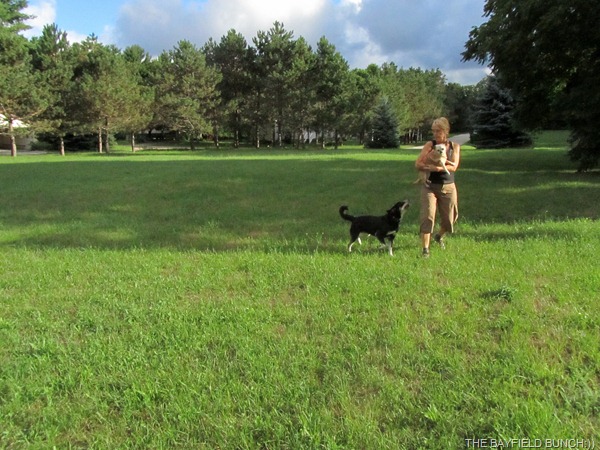 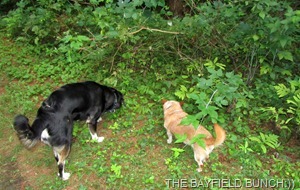 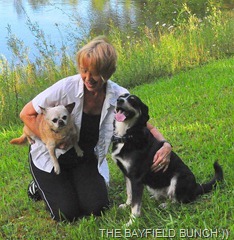 OUR FIRST WALK  GETTING TO KNOW EACH OTHER

Pheebs is 3 now & unlike many dogs she does not like the water & has no interest in swimming. Checkers used to just love it when I would get the big garden hose monster going but not Pheebs. Both Max & Checkers loved swimming at the beach but Pheebs stays well back from the water's edge. Just a few drops of rain will keep her on the porch. On our walks past the pond she loves stirring up the frog[s & making them 'sproing' into the water, being very careful of course not to get her paws wet. 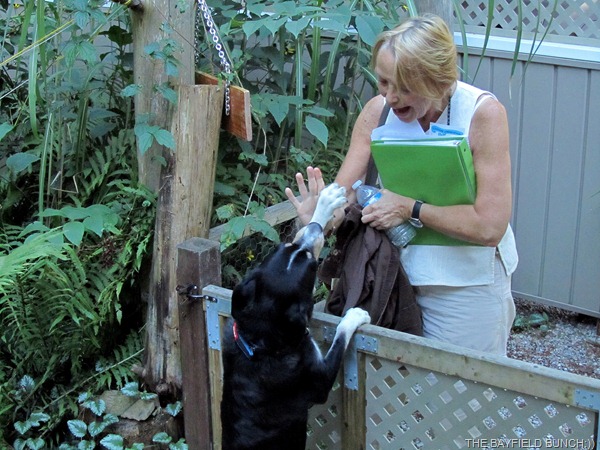 RIGHT FROM THE BEGINNING, PHEEBS HAS ALWAYS GIVEN KELLY A ‘HIGH 5’ WHEN SHE GETS HOME
Whatever room we are in, Pheebs is in. She follows us like a little shadow. If I walk from the sunroom to the living room she is right behind me & if I go into the bathroom she waits right outside the door. At night she is either on my bed or on her doggy bed at the foot of my bed. When I go to bed, Pheebs goes to bed & when I get up, Pheebs get's up. And, so it goes, all day long. If I'm not home she does the same with Kelly, following her everywhere just like a little shadow.

WAS ALWAYS SO GREAT WATCHING PHEEBS & LITTLE CORA PLAYING TOGETHER
Every time one of us goes outside, whether it be for 5 minutes or 5 hours we are greeted each time when we come in by a totally ecstatic little tail wagging dog. It's like we had been a way for 6 weeks or something. She is just so continuously happy all the time. And, 'the happy' just never stops. It's 24/7:))  Now, a slight correction for a second ‘Senior Moment’ I had today…….In my mind I have had it that August 8th was the day we met the Pheebs but looking back to my post a year ago I now realize it was actually August 9th the Pheebs arrived.  Well, no matter, a year is a year & what a great year it has been:))))))))) 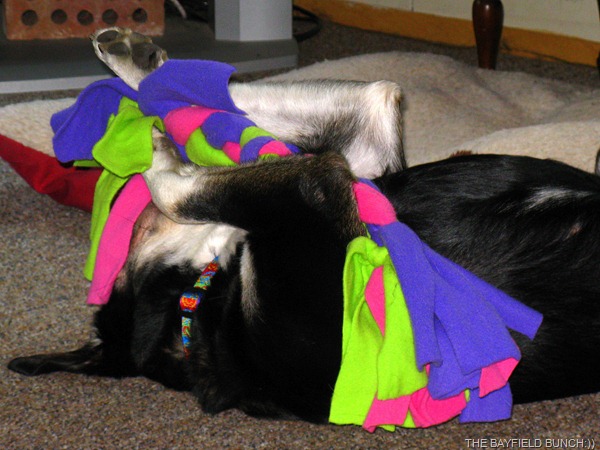 PHEEBS LOVES PLAYING WITH ALL HER TOYS 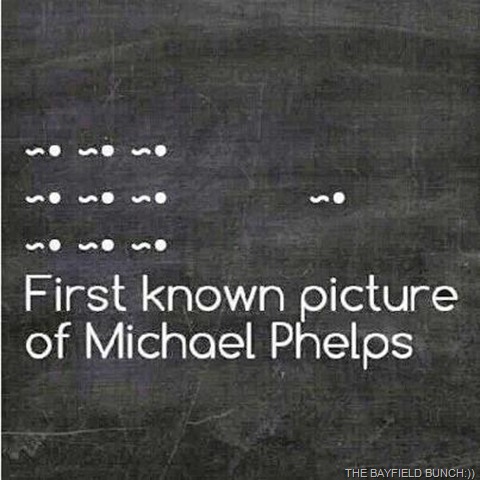