A BUSY DAY IN THE DESERT A FEW YEARS AGO 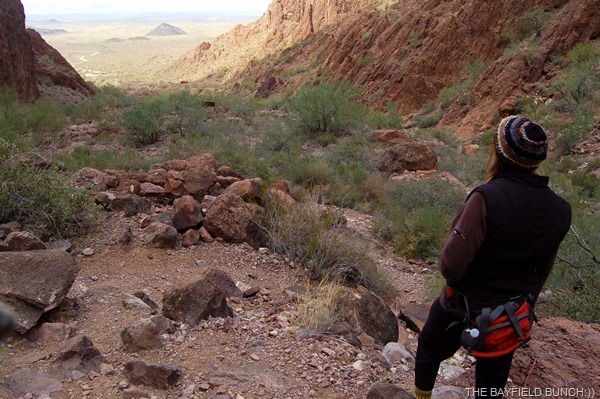 HIKING IN THE KOFA MOUNTAINS SOUTH-EAST OF QUARTZSITE ARIZONA

Pheebs & I saddled up the Jeep this morning & rode into town on our weekly errands run. Gas, a few groceries & a Tuna sandwich from the Deli to split between us. Turns out that was about the highlight of our day. We were back home before 10 & I started on one of my least favorite jobs....cleaning windows. That took up the rest of the morning & I still have more to do. We are back into a warm spell again & by noon the humidity was building.  So, that was it for this guy in the window cleaning department. Another window, another day. 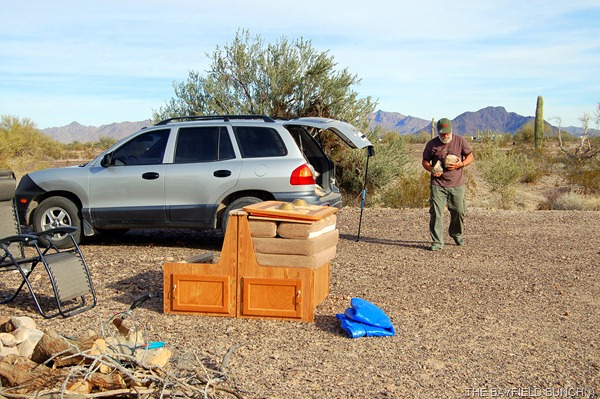 OUR RIG’S DINETTE SITS ON THE DESERT FLOOR 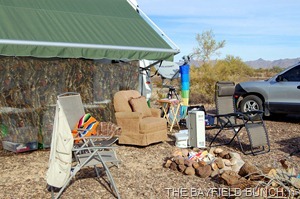 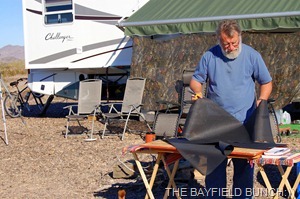 TUB CHAIR IS OUT & CUTTING SOME SUN SCREEN SHADES 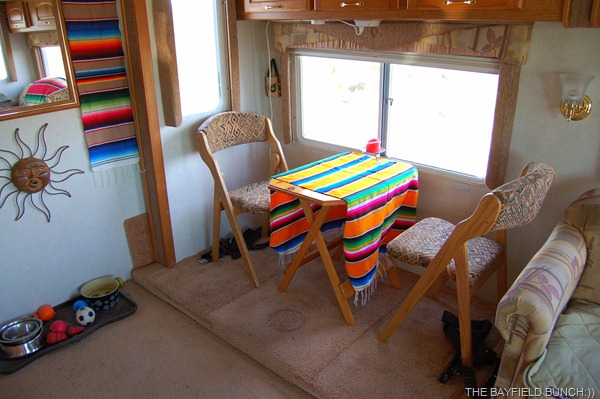 THIS WAS OUR TEMPORARY DINETTE FOR A COUPLE DAYS

Couple posts ago I told you how we had to move several times in one day while boondocked south of Quartzsite Arizona. Today I will tell you the reasons for us being there in the first place. 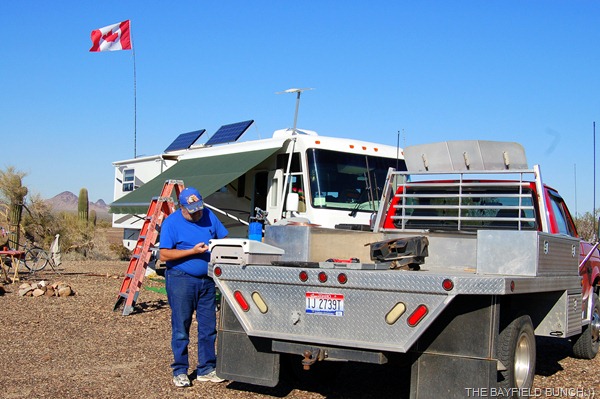 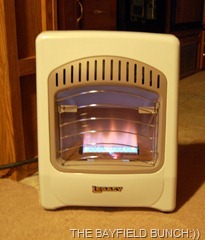 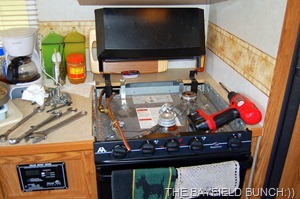 OUR LEGACY BLUE FLAME HEATER INSTALLATION
Quartzsite Arizona in mid to late January every winter is an RV'ers mecca. Thousands upon thousands of of RV's converge on this tiny little dusty desert town to take advantage of the countless vendors, dealers, Big Top tent deals & shows. RV's scattered across the desert floor for as far as one can see. It makes a bee hive of activity look tame by comparison. It is a favorite rallying point for large groups of friends who travel there from all over the North American continent & is the largest annual gathering of RV's in the world. Despite our dislike for masses of people, traffic congestion, & crowd chaos we were attracted to Quartzite every January for our first 3 years of traveling. But, it was the last time we boondocked there that we had a definite purpose in mind. 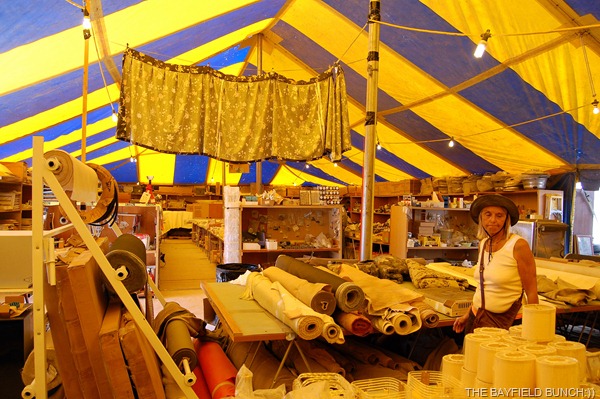 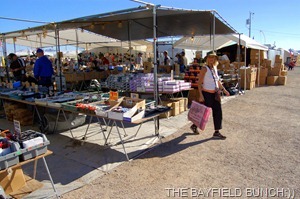 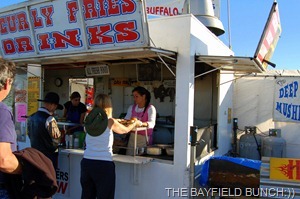 DOING A LITTLE BROWSING IN QUARTZSITE ARIZONA
In the Autumn of 07, while heading west on I-70 we had a big Kansas cross wind rip out & destroy our side awning. That is a short story in itself. We knew the best place to get a new awning was probably going to be in Quartzite the following January so we waited until then & headed into the desert about 6 miles south of the tiny town & set up camp for a week. 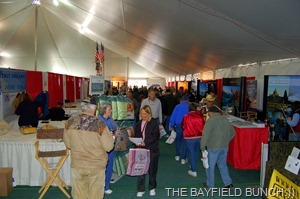 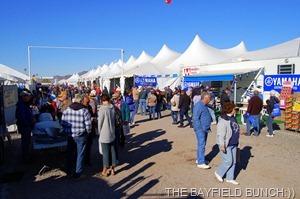 THE ‘BIG TENT’ AT QUARTZSITE
Took the car & headed into town making our way through the maelstrom of people, searching for an awning installer. Didn't take long to find one so made arrangements for them to come out into the desert & replace our ripped awning with a new one. Also decided at this time to have a Legacy Blue Heat flame Heater installed. They are much cheaper to run than the rig's propane gobbling furnace. We headed over to a vendor called Granny's & made arrangements for a fellow bring & install the heater. Both the awning installer guys & the Blue Flame heater installer guy ended up coming on the same morning so things were really hopping. I had myself in the same mix at the time trying to measure & cut out some sunscreen material to fit our rig's driving area windows. By the way, there was no way either of those installers could have found us way out in the desert with so many rigs scattered around so when they phoned to let us know they were on the way I quickly drove out to the highway & watched for their service trucks coming down the highway. Gave em a big wave & had them follow me through a maze of Mesquite shrubs, Saguaro cactus & hard packed rocky desert floor to our camp site. 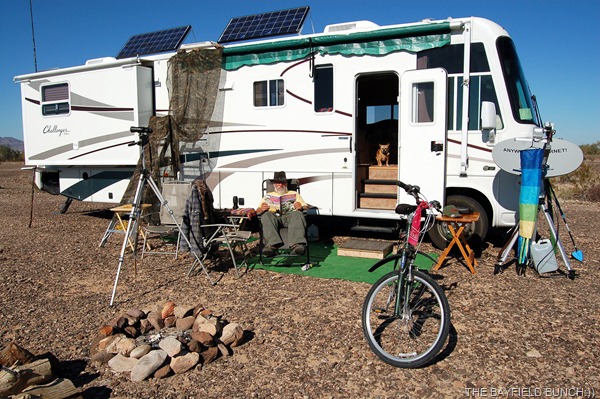 YOU CAN SEE WHAT’S LEFT OF OUR TATTERED AWNING 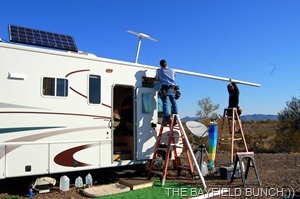 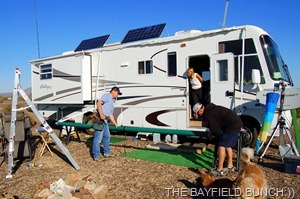 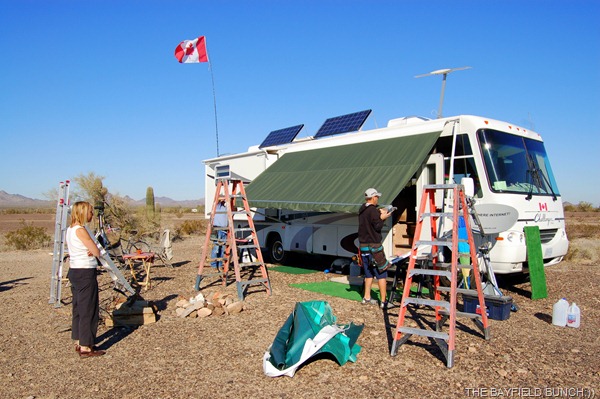 NEW AWNING INSTALLATION
It was a week of busy decisions & another major decision we made was to get rid of all the furniture in our coach. RV furniture in the mid range rigs is anything but comfortable. With the few tools we had along I totally dismantled the whole dinette set, unbolted the couch/bed from the floor & did the same thing with the tub chair. Piled everything outside except the couch-bed combination & threw a tarp over the stuff. Next morning we loaded it all into the Santa Fe & drove it into Quartzsite to a vendor called, 'The Gambler' & sold it. Upon leaving Quartzsite a few days after that we stopped at the Gambler again & he had a few of his boys wrestle the couch/bed thing out the door. We headed east out of Quartzite with just a couple small wood chairs to sit on in the back & I slept on the floor with the dogs for a couple nights until we were finally able to do a little shopping at an Ikea store south of Phoenix Arizona. I will tell you about our Ikea experience in my next post............................... NOT OFTEN YOU WILL SEE US IN AN RV PARK BUT HERE WE ARE AT THE BUENA TIERRA CAMPGROUND  IN CASA GRANDE ARIZONA IN PREPARATION FOR THE NEXT DAY, SHOPPING FOR FURNITURE AT IKEA IN TEMPE NEAR PHOENIX

GROANER'S CORNER:(( Here's a short one for all you texter's out there........Can you read the following?