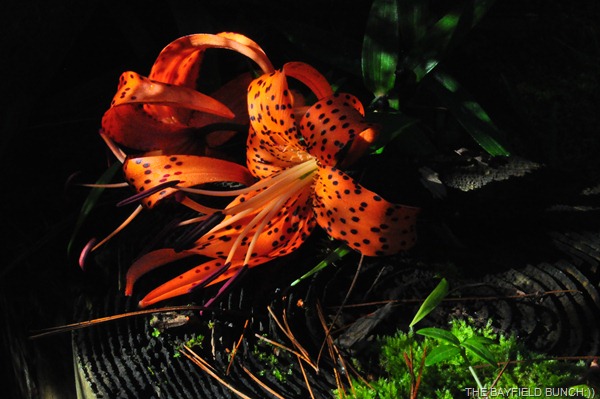 ALWAYS NICE TO SEE OUR FRONT YARD TIGER LILIES IN BLOOM EACH SUMMER
I'm not a regular Pineapple juice drinker so when I bought a large can of it last week it wasn't the juice I had in mind. It was the can I was looking for. Started my can search in the canned vegetable aisle even checking out some Tuna tins. All too small. Slipped over to the Juice aisle & checked out the tin tops over there. Size was acceptable on the V8's & Apple Juices but it was the Pineapple can that had the best lid for my purpose. Nice rounded flat center area. I had plans for that lid on top of the Motorhome. But first, we had a bedroom slide on the Motorhome in need of repair. 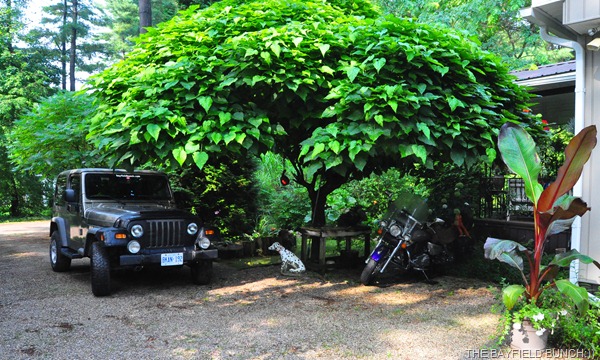 NICE TIME OF THE YEAR FOR ALL THE GREEN FOLIAGE AT OUR HOUSE
In March of 2011 while in a campground at Canyon De Chelly in Arizona we were hit with some pretty heavy duty wind gusts on the passenger side of the rig. We had the bedroom slide open & it seems that slide has never worked smoothly ever since. We sure don't want to be out in the middle of nowhere & have that slide suddenly jam in the open position. Monday morning we took the rig into Bayfield's STORMRUNNER R.V. SALES & SERVICE to have that problem looked at. Well, it was not an easy fix & it took Harry & the boys a a lot of work to get that slide working smoothly again. Turns out some bolts had broken off & the whole roller assembly under the slide was askew & coming apart. That mechanism cannot be reached unless a large closet & drawer assembly in the Motorhome is 'torn out' & that would have left the closet in a shamble of broken pieces. Harry figured out a way to repair the assembly from the outside & although we have a couple extra heavy duty bolts & washers under the slide now, they can't be seen when the slide is in. Main thing is, the slide runs smoothly again. A well thought out innovative repair job done by a clever mind for sure. A leaking windshield washer container was also repaired, a missing vent cap replaced & a new spare tow cable assembled. And, my Pineapple Juice can lid is now securely affixed to the roof of the Motorhome acting as a base for our magnetic Sirius Satellite Radio antennae. And yes, I did end up drinking all the Pineapple juice too.  Oh, Harry & Dianne gave us a nice Bayfield Bunch discount as well:)))))) 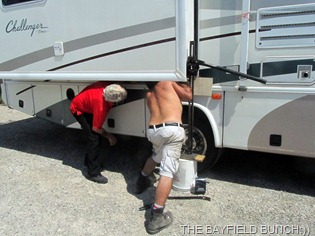 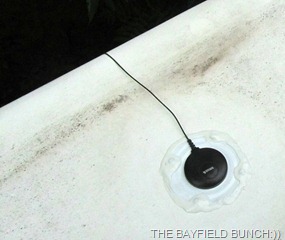 HARRY (RED SHIRT) & ONE OF THE FELLA’S HARD AT IT TO REPAIR OUR BEDROOM SLIDE… MY MAGNETIC SIRIUS SATELLITE RADIO ANTENNA SITS FIRMLY ATOP MY PINEAPPLE JUICE CAN LID CAREFULLY CONCEALED UNDER A COAT OF WHITE PAINT…I WILL TAPE THAT CORD DOWN LATER & YES, I KNOW THE ROOF NEEDS A GOOD CLEANING
The weakest link in my camera gear has always been my cheap broken down tripods so Monday I finally decided it was time to get myself a decent tripod before one of my cheap-o pods collapses with an expensive camera & lens on top. Headed the Jeep south Monday morning & made the one hour drive into the north end of London Ontario. I knew the only store around carrying the type of tripod I was after would be HENRY'S CAMERA STORE. Had my mind on a MANFROTTO 055XPROB & that is what I ended up buying. Manfrotto has always been a leading name in quality tripods.  It is a two part purchase.  First you choose the Manfrotto tripod itself & then you choose the type of Manfrotto head to mount on that tripod.  The head I chose was an 804RC2 Pan head with a quick release feature.  Also, how nice to have metal parts instead of that ever breaking cheaper plastic stuff & how great to finally have a rock steady tripod.  Henry’s is one of the few places around here I know of that carries the Manfrottos.  And, how great not to have one of the usual robotic techie type guy clerks to deal with.  Instead ,I had a pleasant young girl help me out with all my questions. How refreshing to have a salesperson with an actual warm personality & genuine interest. Thank you Jessica Ginzel. 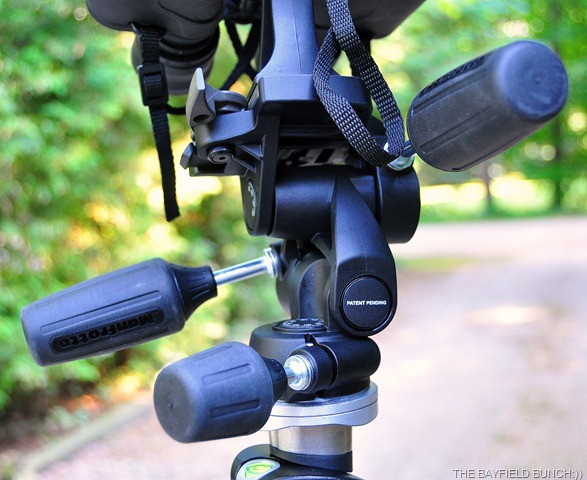 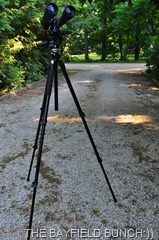 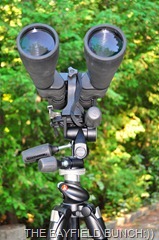 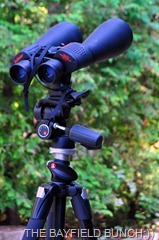 TOP PHOTO SHOWS THE MANFROTTO PAN HEAD…BOTTOM PICS SHOW TRIPOD & HEAD WITH MOUNTED BINOCULARS
Wandered some country roads on the way home & came across a really nice but really spooky piece of property for sale near Exeter Ontario. Waist high weeds to get to the old tumble down irreparable house. Noticed a back door slightly ajar so I slipped inside for a look see. Yikes!! I don't know what happened in this old house but I took a couple quick pics & high tailed it out of there. Later, Kelly was unable to find out a single thing about this property on the internet despite the overgrown Realtor's sign out front.  I always find these types of old places interesting. 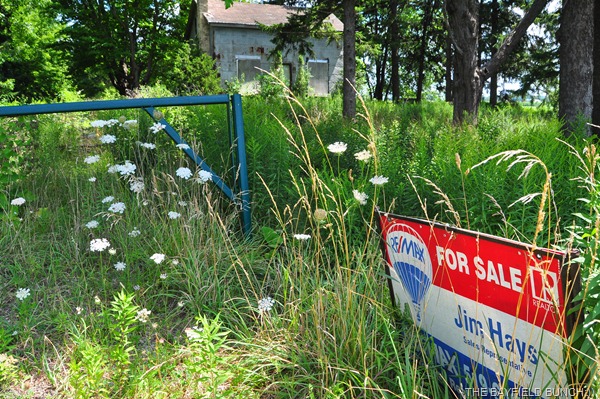 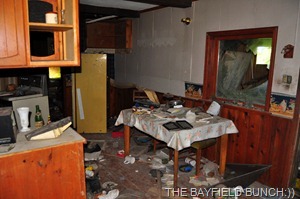 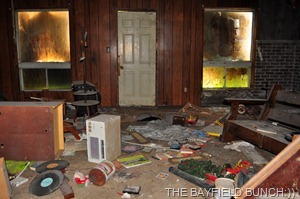 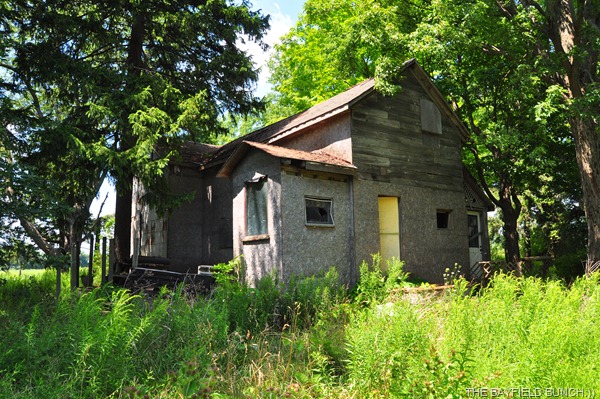 Our October travel plans may be undergoing some changes & our proposed route across the West through Colorado may have to be put on hold for another time again. In fact, we may very well first head East, then waaaaay South, before heading West. More about this possible route change in a later post. Also, some other plans may be afoot (no, not buying a house) but orders from headquarters have already come down the pike for me to 'keep a lid on it or else'!! Hard for Al to keep a lid on anything…………especially the Peanut Butter jar:(( 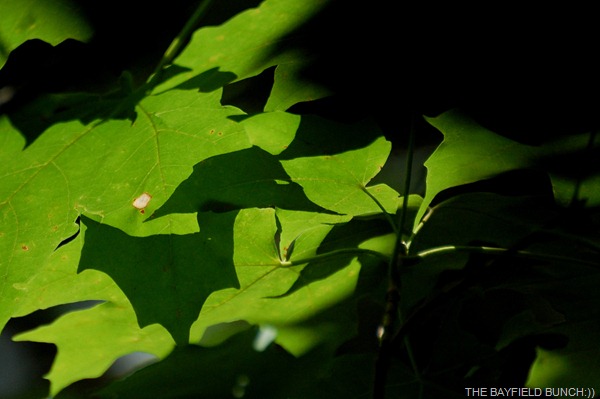 CAN YOU SEE MY ‘DARTH VADER’ DUCK?
And, keep in mind when I spoke about my feeling a touch of Autumn in the cooler morning air a few days ago that we are much further North here than many of our Southern neighbors who are still waking up to hot morning temperatures. It was 54F when I got up shortly after 4 this morning. Our Fall season generally begins it's early shift about mid August. Also keep in mind, some folks are probably slightly more aware & attuned to the outdoors sort of thing than others. Sunday night I was tired & didn't write a post but published a note saying I was taking a break.  I did that for a reason. I have been a daily Blogger for a long time now & the few rare times I didn't publish a blog over the past few years I had comments & emails come in wondering if things were alright. They were. Out of simple courtesy to the folks who read my blog & to allay any concerns that something may be wrong, I posted my 'needing a rest' note.  In the future, at the end of the day you do not see a post from me, & whether there be an explanation or not, just know that all is well & I simply did not feel like writing a post that night.............10-4:))

Pheebs & I nearly got ourselves run down by a rough tough biker gang this afternoon.  It is rare for us to encounter people on our Pine forest trail but walking along quietly this afternoon I was startled to hear something approaching quickly from behind.  We barely jumped aside in time when the bikers roared through.  Recovering quickly I did manage to get a shot off of them disappearing down the trail in a rumble of pine needles & thunder. 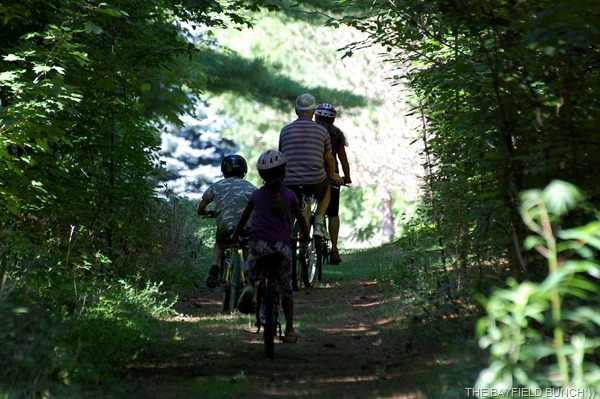 - Home is where your pet is:))
- "If having a soul means being able to feel
love and loyalty and gratitude, then animals
are better off than a lot of humans."
(James Herriot)
- The pessimist complains about the wind; the optimist expects it to change; the realist adjusts the sails -William Arthur Ward
- The only thing better than right now will someday be the memories of right now...AL.
stargeezerguy@gmail.com
Posted by Al Bossence at 7/31/2012